Let’s Start Off At The Beginning

Super Sons is a series that came out of DC Rebirth Superman, to which we were introduced to Jon Samuel Kent also via DC Comics Road to Rebirth by both Dan Jurgens & Peter . Tomasi, not forgetting Jon Samuel Kents first introduction via DC Convergence Superman Comic Run. 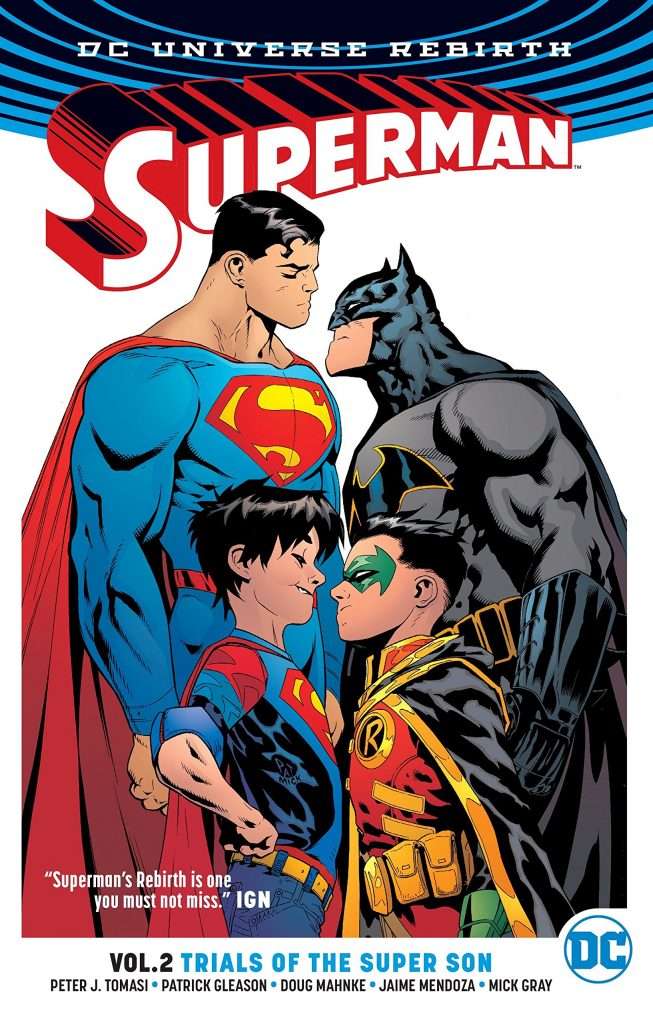 In Trials Of The Super Son, this became like an official testing ground to see if they could put 2 official offspring of the main heroes, to see if they could work well in the comic run under Peter J Tomasi, to which in the Superman run, along with Patrick Gleason who has worked alongside Peter J. Tomasi on his Batman & Robin run, the care for both of these characters offspring being Damian Wayne (Robin) & Jon Samuel Kent (Superboy), we already had a set up of friends for both characters, for Damian Wayne it was Maya Ducard, which took place in Robin: Son Of Batman under Gleason, an for the character of Kathy to which both Gleason & Tomasi worked on in the Superman run, it later added to the Superman run, the character of Boyzarro, who is the Son of Bizarro. 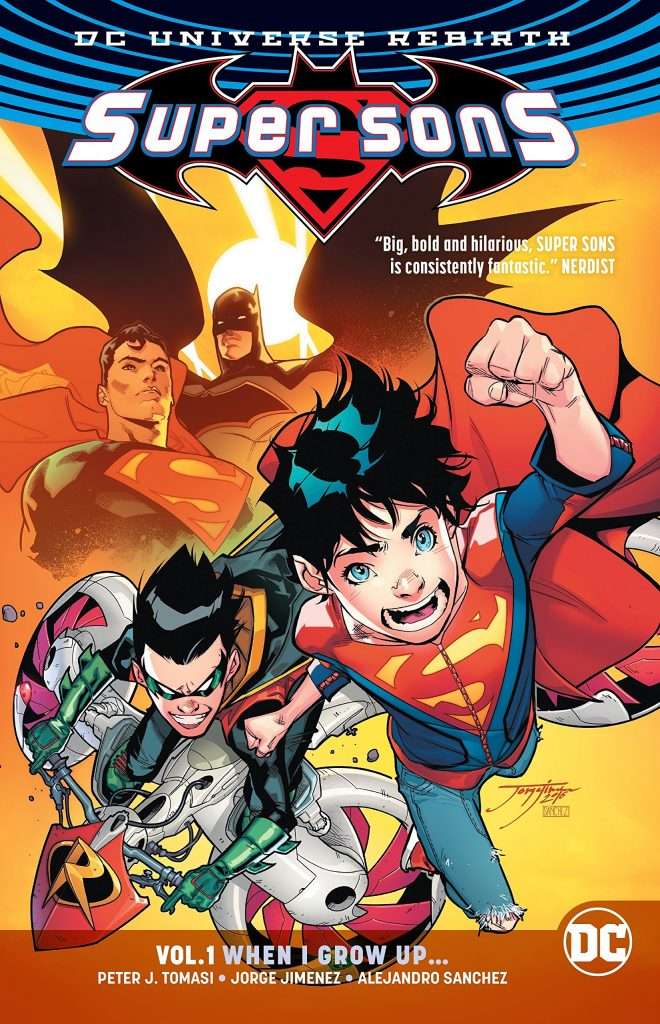 After the Trial Of The Super Son, when Damian & Jon earned their capes from their Biological Fathers, plus some getting to know each other time, which you can definitely see they were both on rocky ground, until they started to begin to like each other, still had things that kept them both as different individuals, sure there was a small age difference between them, as well as height difference, still made it all exciting. 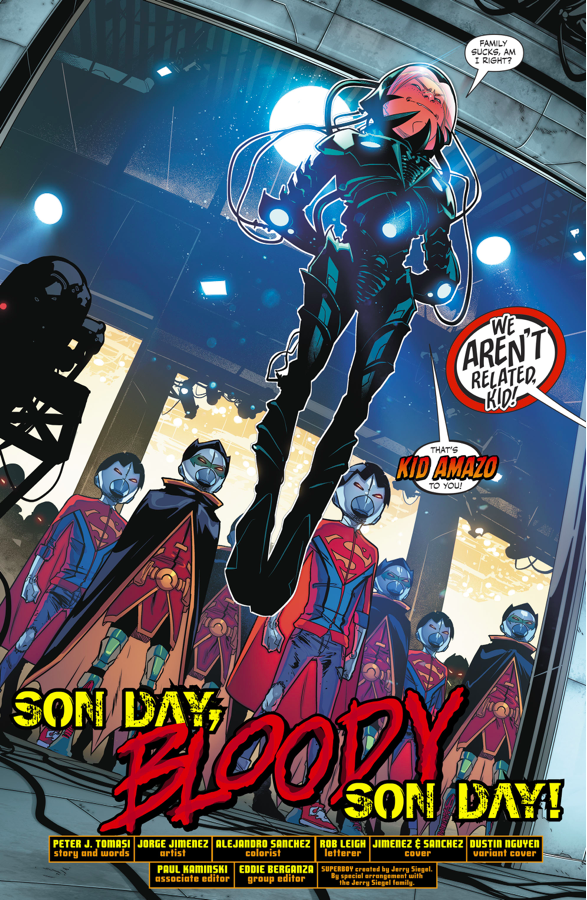 As the 1st Super Sons story arc begun, we learned of the character who would be 1st Villain, being Kid Amazo, an how this character had somewhat changed some more since moving into DC Rebirth, we still somewhat had Maya in the background who had been observing them, until she was left unseen in the run, still appeared in the Superman rebirth run, alongside with Kathy.

By the time the Super Sons start to take on Kid Amazo, both Damian & Jon, now have small nicknames they call each other as, for Jon he called Damian “D”, an for Damian he called Jon “J”, as their friendship began to grow. 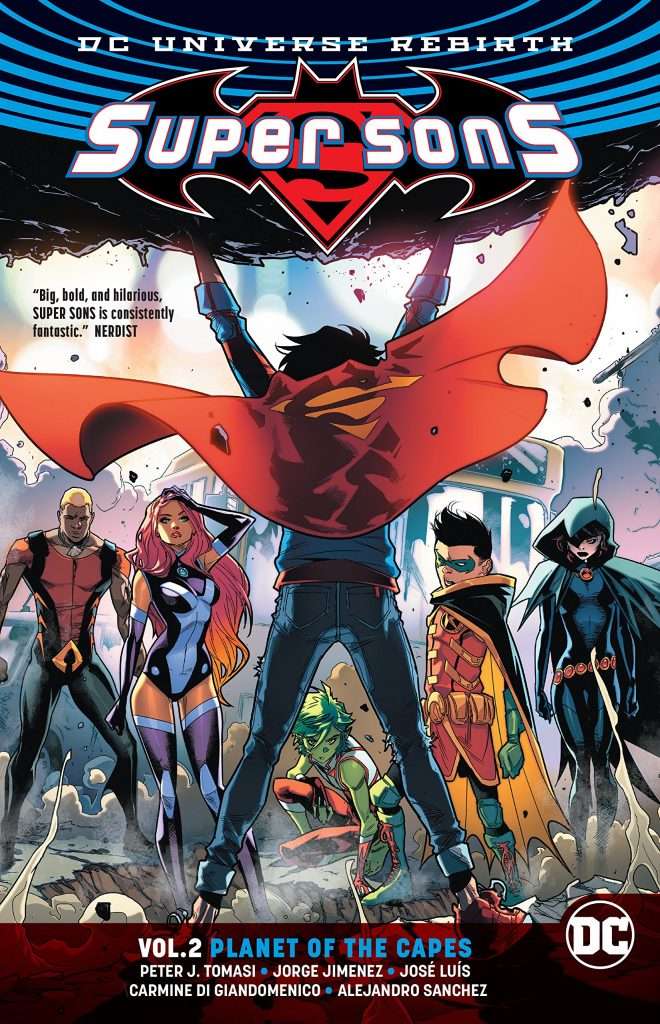 By the time we move into The Planet Of The Capes arc which also crossed over with DC Rebirth Teen Titans, which was being written by Benjamin Percy, they encounter an enemy, which managed to age up Damian to being Grandpa age, the teen titans which Damian is working with, also enjoy Jon S Kent aka Superboys company in also helping them out, this, will also come back up again later with the next volume, it is also in this Volume or these issues that we officially get the Super Sons Headquarters in Morrison Bay, between Gotham & Metropolis being The Fortress Of Attitude. 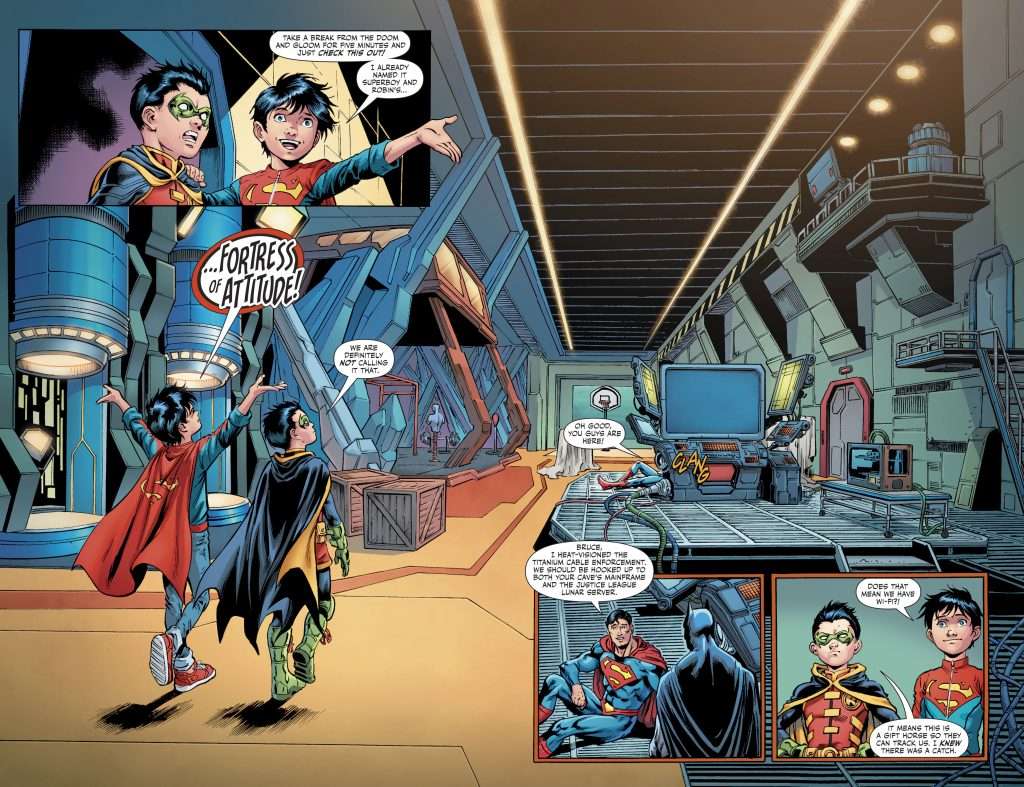 Also in the upcoming issues, it was also established that they now both go to the same school together, especially to help increase Damian’s social skills, an Jon S Kent helps to do that with Damian.

As the arc of Super Sons Of Tomorrow starts we have a Tim Drake from the New52 enter into the DC Rebirth universe, into the world of the Super Sons, to which he lays blame on Damian & Jon being responsible for the destruction of something that happened in his universe with his Jon Kent, so this one goes into pre-emptive measures to stop this Jon S Kent in the Rebirth of DC, as this arc occurs, this brings both Damian & Jon so much closer together as friends, as this Tim Drake also takes on a new mantle name known as Savior, things eventually get resolved towards the end of the story, with the help of Superman on the scene as well, when it came to things in relation to Jon S. Kent joining the Teen Titans, it was a let down to his character, because not all the characters were working as a team, with some rough spots, which showed later in the Benjamin Percy run. 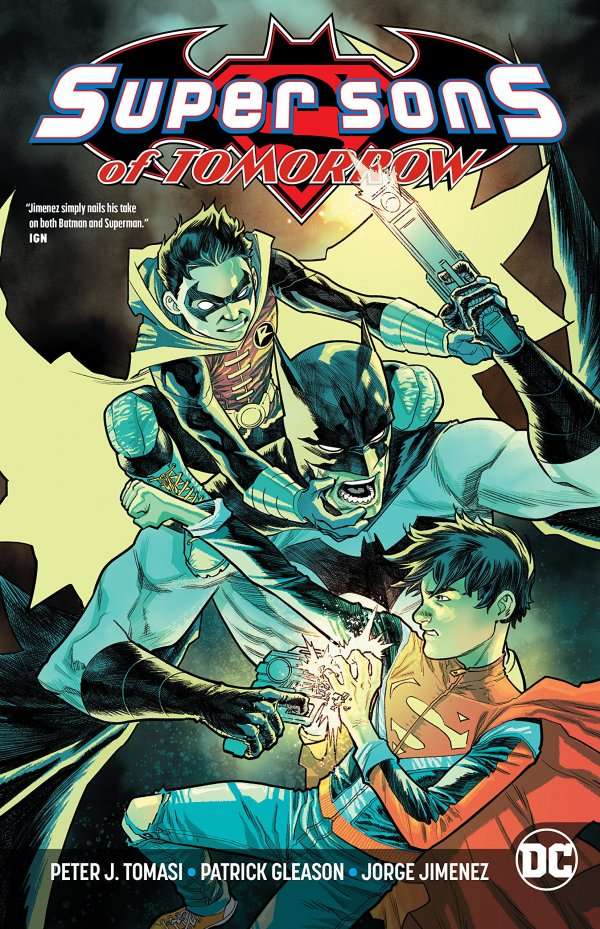 As we moved into the 3rd Vol of the Super Sons, this had 2 story arcs, 1 consisting of Talia Al Ghul which the arc was called the Parent Trap, to which something was done to threaten Lois Lane, this story was also used to teach Jon some more about Damian Wayne’s Past before he became Robin, as his best friend was also an Assassin who worked under his mother, it definitely had some funny moments, including Jon asking if he could be taught how to use a Sword, to which Damian refuses. 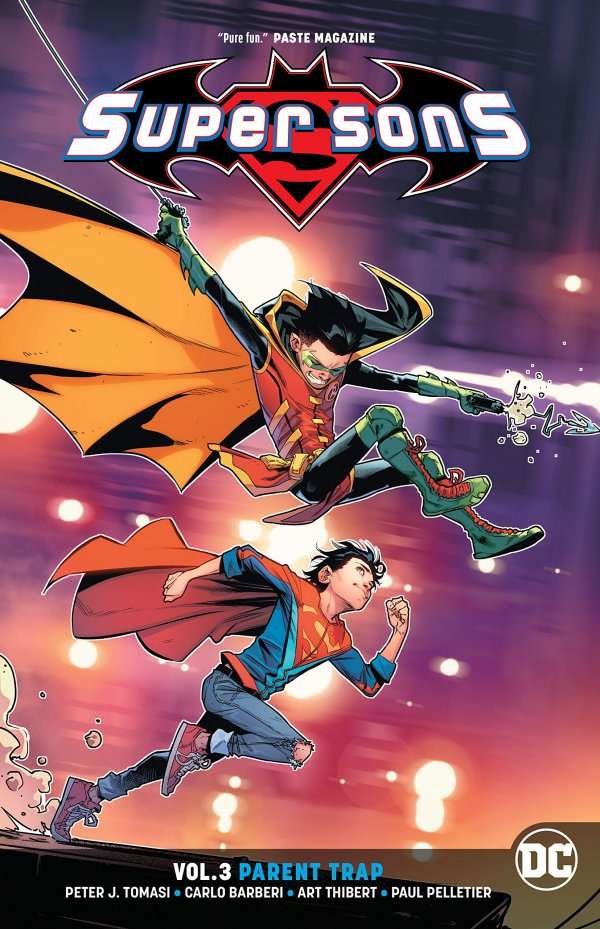 The 2nd Arc consisting of the Return of Kid Amazo, to which he took out many members of the Justice League, an Cyborg was there to also help out the Super Sons, upon completion of that arc, we did move into another crossover one shot being the Super Sons/Dynomutt Special. 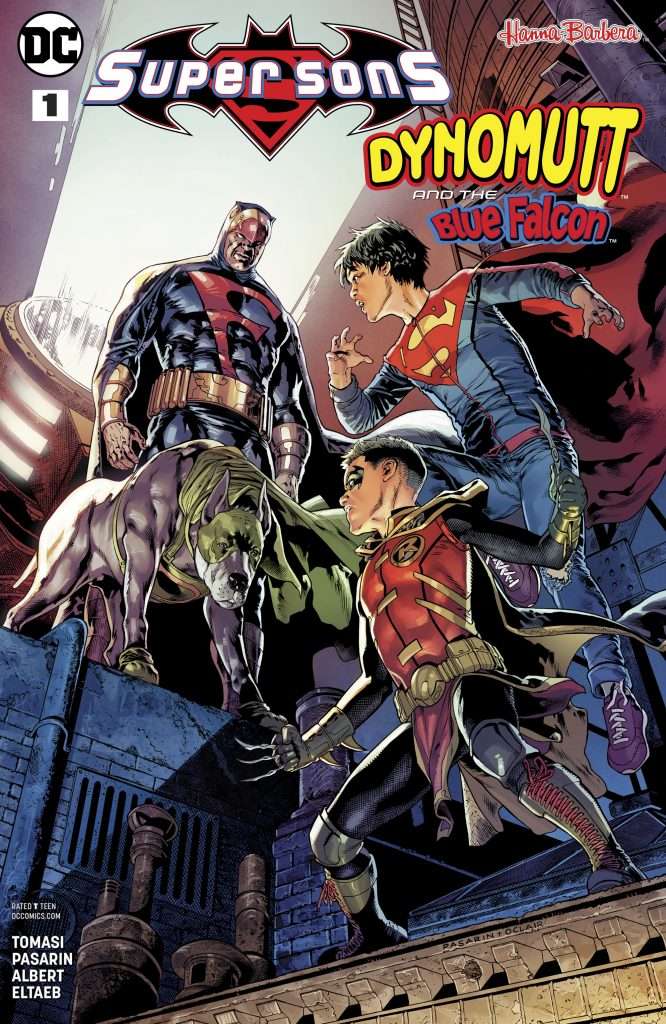 With this list, there will be some carry over from Pre-Super Sons as well as present Super Sons in this time period. 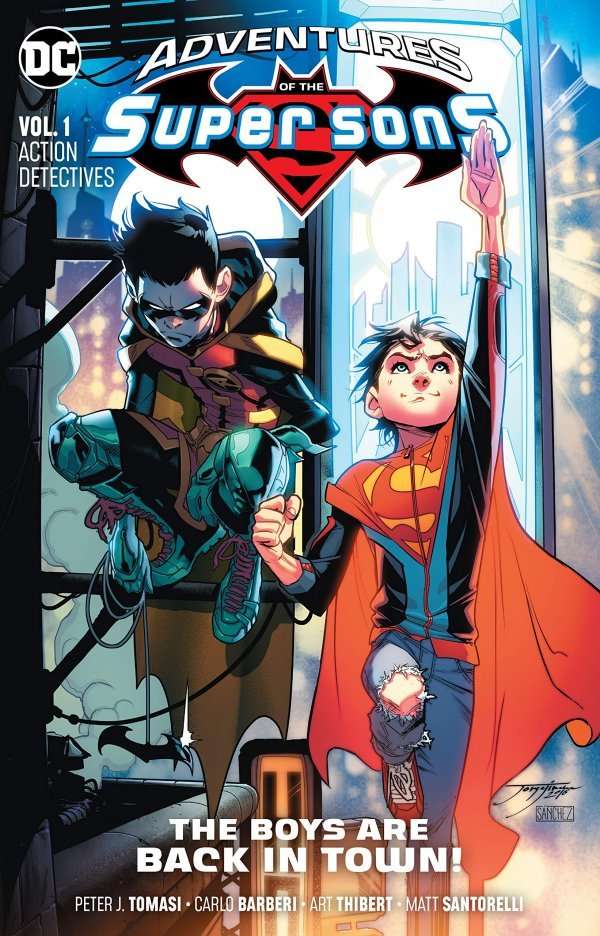 Moving into Adventure Of The Super Sons, Peter J Tomasi didn’t miss a beat, with both the 1st & 2nd Volume, where in this one we had the Super Sons take on a slightly different villain group, called the Gang, in this gang used Jon S Kent to obtain the Hypercube, which had made its appearance in the Peter J. Tomasi Superman run. 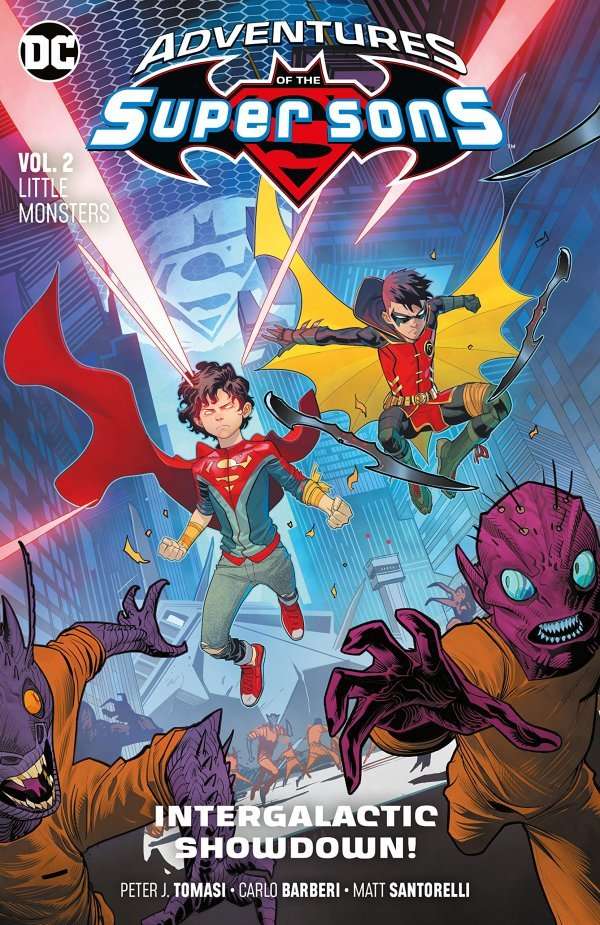 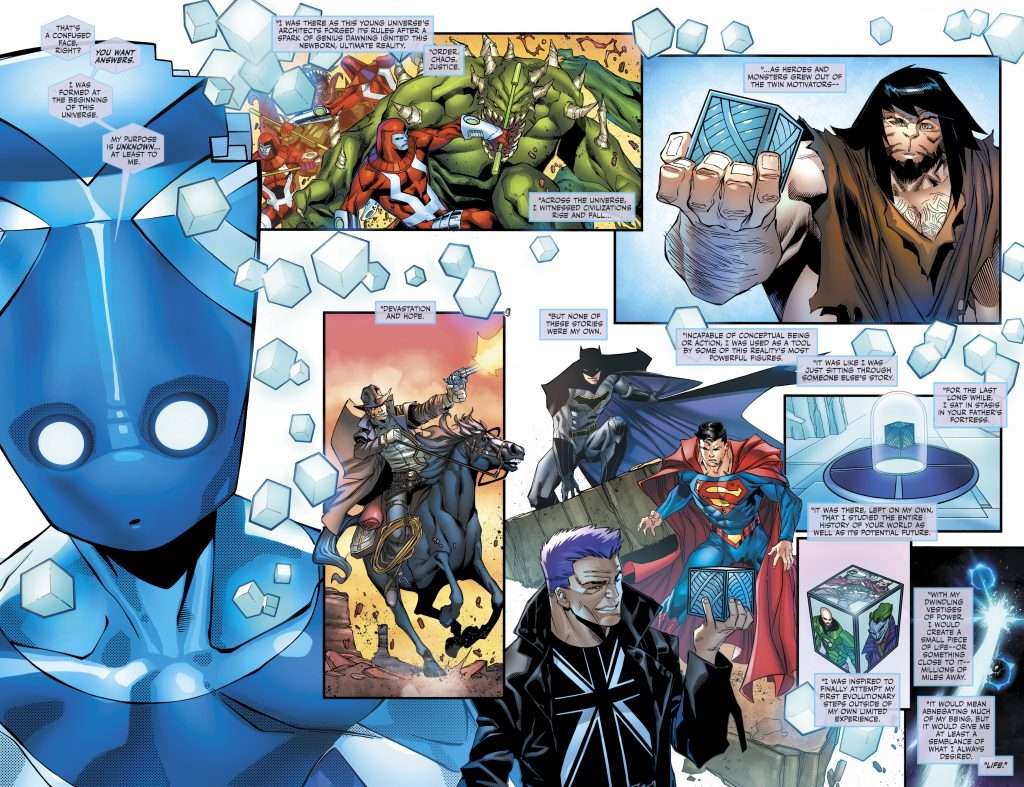 In this story the Super Sons definitely got to explore outside the earth they presently live on, go to a planet or 2, plus meet up with a Robotic Jonah Hex, end up seeing what could be a possible future for both of them. This then causes the system they were trapped in to be broken, which had them in a dream state, we also had Tommy Tomorrow turn up as well, plus the members of the gang to which we learn later on is connected to the sentience within the Hypercube itself, eventually wanting to make friends with the Super Sons, without either Batman or Superman knowing about it, it does eventually get restored to its place in the Fortress Of Solitude. 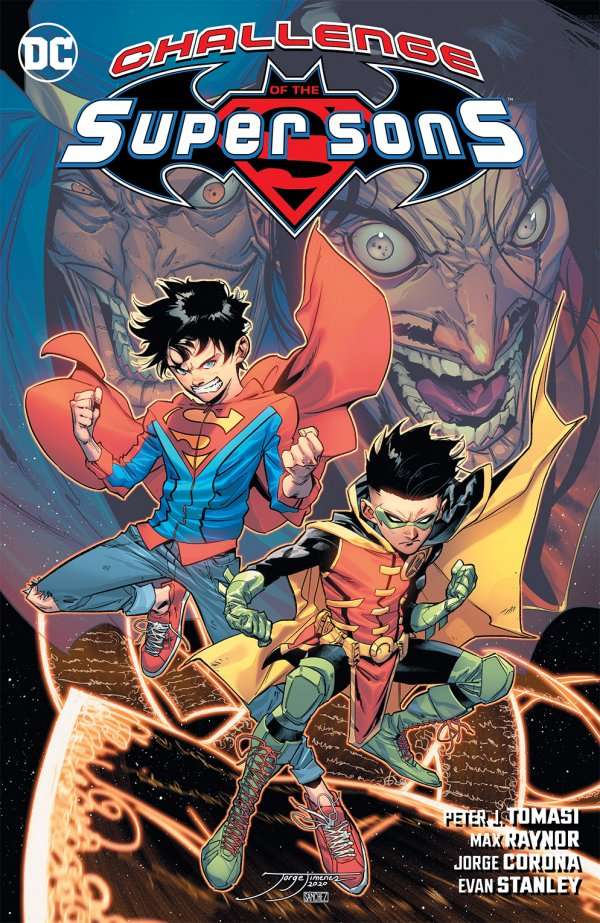 In Challenge Of The Super Sons, it showed up at the right time & right place, just when you needed some hope in a time of disarray, with things ending like DC Death Metal to entering the DC Future State, we got the introduction of 2 Villains(Felix Faust & Vandal Savage) which had he Super Sons in their sights with their own cruel devices, but also the appearance of a character called Aurora, who was Felix Faust young apprentice, in this run, our fave Super Sons had to go out of their way to save some the members of the Justice League, whilst trying to reverse the curse of a scroll, the set up of this story was amazing, definitely gave high manga vibes, as we even had our protagonists J & D, even being sent to the Past & Bought forward once again into the Future of these amazing 14 chapters which were broken into 7 physical issues of this run, also seeing how the members of the Justice League once they solved out what the Super Sons were doing, also came to their rescue.

New Friends Made In this time 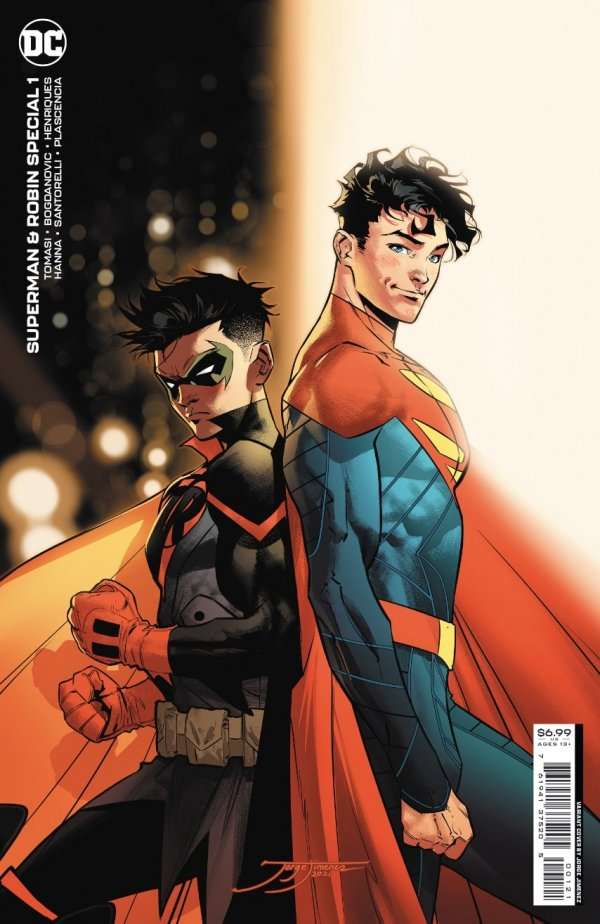 As we move into the Peter J Tomasi Super Sons one shot, called Superman & Robin, Peter J Tomasi brings back the Hypercube, with the great editing & story skills of his team, they made sure to keep us the audience up to date in relation the Hypercube once again, as it sets off the alarm at the Fortress Of Solitude. With the return of this sentient Hypercube, the Super Sons were both called back in again to the Fortress Of Solitude, one thing I think a lot of people missed was the actual title of this chapter, which leaves things very open ended, not plot hole filled, as many would think, as we know Peter J Tomasi is returning with another Super Sons story in regards the Saved By The Belle Reve, hopefully in both the Super Sons related Dark Crisis stories, time will tell until those Solicitations come out.

By restoring the Super Sons, even in the adventures they have had under Tomasi, they have been incredible, I am sure you noticed in this article, I did stray away from both Brian Michael Bendis & Tom Taylor’s destruction of these characters, as it comes off like a sexual fetish from both writers, as well as too some of the DC Editors, sorry, but you guys need to find a job packing boxes at your local Woolworths or Walmart outlet to get in touch & down to earth as to where you are delivering your product too, an to not act like cowards whenever criticism comes your way on all subjects, as Criticism as it can be Destructive, it can also be Constructive, to help put things in a different perspective.

By making the Present Jon kent we do see in the DC Comic universe the one from the New52 multiverse, it ties in with what Tom Taylor shared in his story with that character, that it was this character that Jor El from the Brian Michael Bendis run bought back, not the Jon Samuel Kent the Super Sons readers actually love to read about, including with the actions around Taylor/Bendis representation of Lois Lane that lack both Heart & Soul.

By bringing back the Sentient & Magical Mystery Hypercube, it does indeed bring back the opportunity to get the Super Sons back together again, with a Legit Superman(Clark Kent) & Robin(Damian Wayne) run under Tomasi, which could either be a mini or maxi series of maybe 7-14 issues long, as you could have the Hypercube return, this time it shows up in the Super Sons HQ in Morrison Bay, an Damian investigates the intruder alert to find it there, this time we get a glimpse of a message from the Hypercube to Damian from the Missing Jon Samuel Kent so basically his own Help Me D, You are my Only Hope, Damian informs his father, to which he gives permission to go with Superman to go search for Jon S Kent together, the Hypercube being one of the things to help track Jon S Kent down, as Batman now has to keep an eye on the present multiverse version of the Tom Taylor Tyrant version of Superboy as Damian Saves his best friend, with Batmans best friend Clark Kent aka Superman.

With the characters that I would include in the Super Sons friendships, I am afraid I have to say, Goodbye Jay Nakamura, you don’t cut it, nor do you Flatline.

The friends that I would add to the Super Sons would be these characters:

I understand there are some people I might have missed on the list, not to worried about it at the moment, there were some characters I did like in the Joshua Williamson Robin run.