Over the years, Spider-Man has donned a host of iconic costumes from his classics digs to the black suit to Iron Spider. Now in 2021, everyone’s favorite wallcrawler will get another brand-new costume to add to his wardrobe.  Designed by artist Dustin Weaver, this new look is unlike any that Peter Parker has worn before. The mysterious new costume can be seen on Weaver’s variant covers for AMAZING SPIDER-MAN #62 and April’s AMAZING SPIDER-MAN #63. 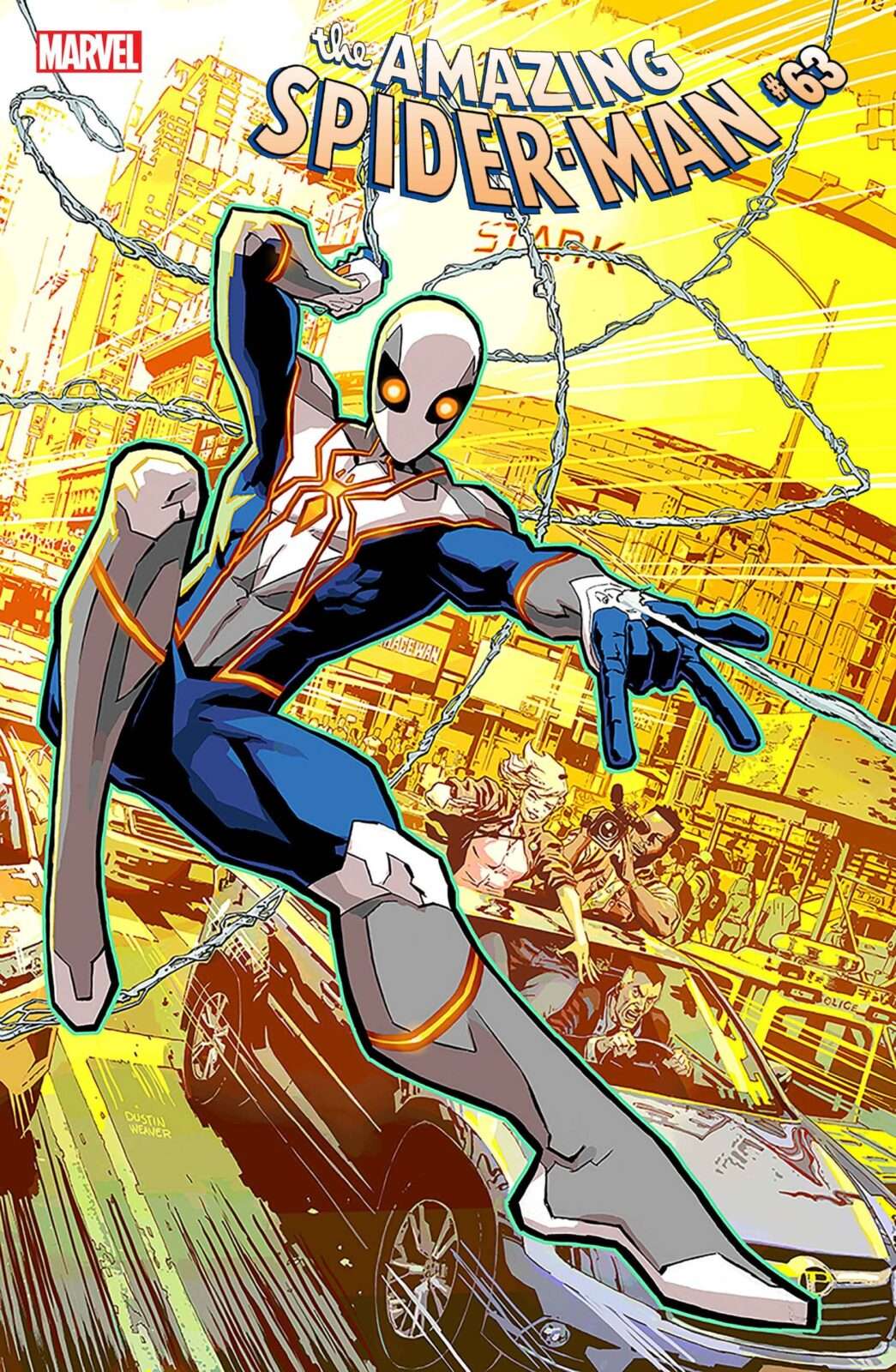 “This design was really a collaborative effort between Nick Spencer, Editor Nick Lowe, and I. They reined in the weirder and more techy features I was bringing and helped create something that I think is simple and both futuristic and classical,” Weaver said. “I can’t wait to see Patrick Gleason really bring it to life!” 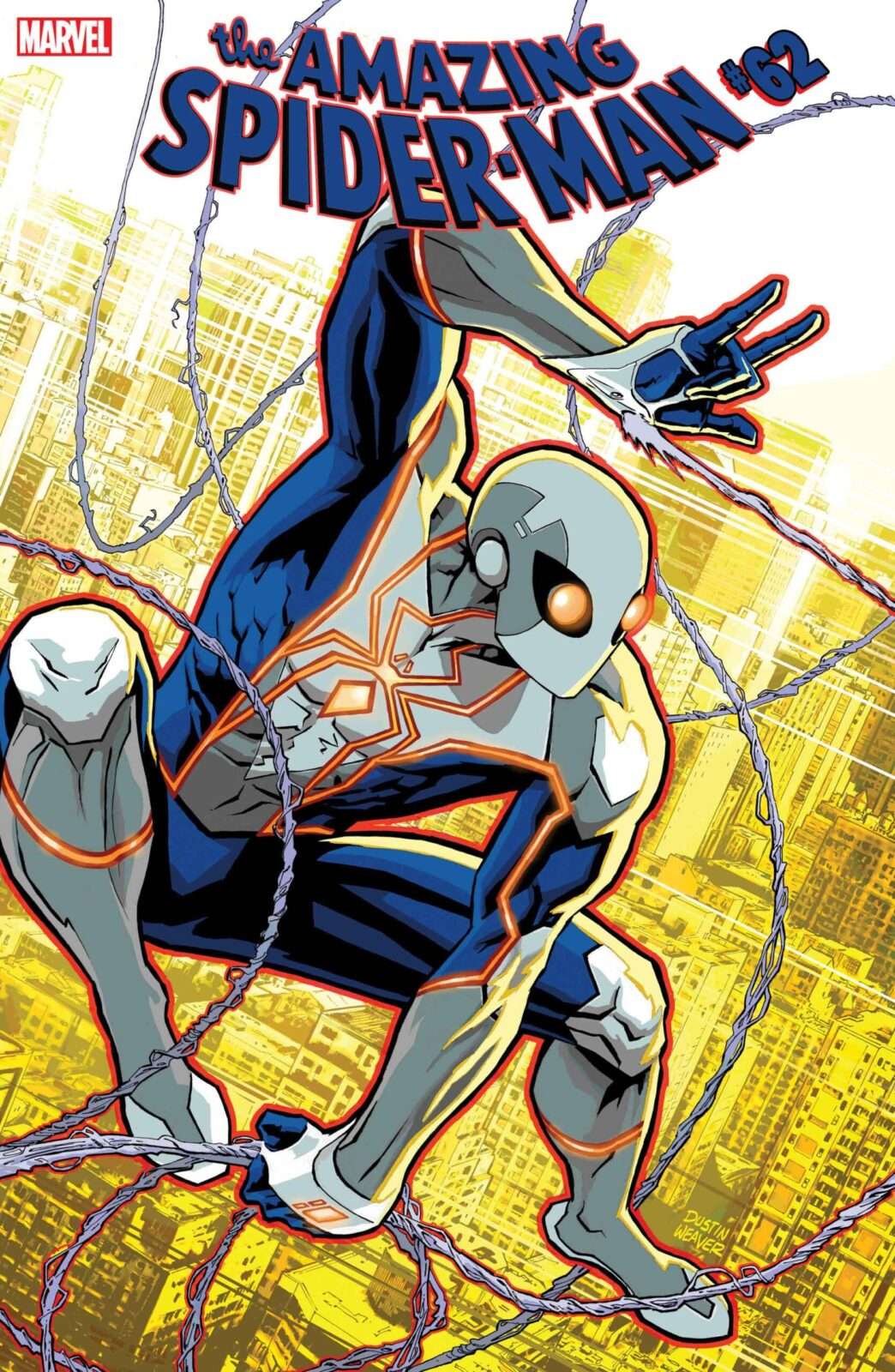 Meanwhile, We Got This Covered is reporting on the last “new” iconic costume for the wall-crawler:

The symbiote storyline remains one of the most iconic Spider-Man comic book arcs of all-time, even if the live-action adaptation was a major disappointment. Hype levels from fans went through the roof when it was first revealed that Sam Raimi’s third movie was going to give them Tobey Maguire’s Peter Parker in the iconic black suit, but obviously the marketing materials wouldn’t hint at the behind the scenes discontent that had plagued the production.

Raimi never wanted to include Venom or Eddie Brock in the story, feeling that Sandman’s arc and Harry Osborn following in his father’s footsteps was more than enough, but under pressure from Sony he eventually relented. Unsurprisingly, then, it turned out to be the weakest part of the already bloated Spider-Man 3, but rumors indicate the studio may be willing to try again.

Of course, the symbiote is currently a focal point of Sony’s Spidey U. after Venom raked in over $850 million at the box office, and there’ve been no shortage of rumors that Tom Hardy and Tom Holland will cross paths sooner rather than later. Sources are saying Sony and Marvel Studios are planning to have the symbiote attach itself to Peter Parker in his fourth solo movie, presumably building towards an epic showdown between Spider-Man and Venom in the future.

We know that Holland is set to stick around as both studios’ Spidey for a while yet, and his next run of adventures are widely expected to follow him throughout college. Not only that, but with the cross-pollination between Sony and Marvel becoming even more obvious in the likes of Spider-Man 3 and Morbius, a second stab at the symbiote story seems to have an air of inevitability surrounding it.

Following the events of Sin’s Rising, Peter Parker will wear the new suit for his faceoff against Kingpin in the next arc of writer Nick Spencer’s hit run. We’ll learn the details behind the costume when AMAZING SPIDER-MAN #61 and AMAZING SPIDER-MAN #62 swing into shops. Amazing Spider-Man #61 by Nick Spencer and Patrick Gleason goes on sale in March 2021 from Marvel Comics.