And it’s already time for the September numbers! And this time around – Marvel’s all-new number one issue has taken the top spot and staved off this summer’s losses resulting in Marvel’s September beating its previous September by 14%, thanks in large part to Marvel Legacy #1 moving more than 298,000 copies. 2017 has been a year in which comics and graphic novel orders had been down 10% in the Direct Market, but Legacy has become the top-seller of 2017 thus far, beating out last month’s new leader, Dark Nights: Metal #1; the second issue of that came in second place with nearly 150,000 copies shipped. It seems positive that we’re getting new entries atop the top-sellers for 2017 list; again, better than the alternative. It’ll be interesting to see how Legacy shakes up that list in October once the event is fully underway and people understand that it’s no ‘Rebirth‘. 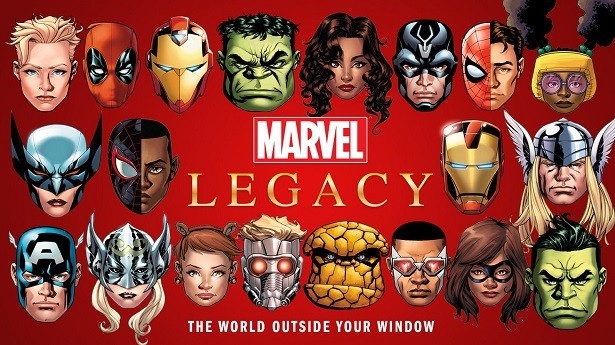 Let’s have a quick look at the top ten comics for the month. Batman and DC Comics still dominate the Top Ten, sharing space with a few Big Events:

Four books sold over 100,000 copies; Batman maintain his grip on the top ten with 6 bat-related titles selling a combined total of over 600,000+ copies, but Marvel Legacy trounces everyone else, nearly hitting 300K copies with a $6 number one issue! Walking Dead still continues to be a strong performer for Image. Our bottom six this month is more of the same, but with a few new titles.

Here’s the raw data for the Top Six Losers at DC for September:

All of these books is below DC’s “cancellation point” (which we once considered to be 10,000 copies); the poorest selling of the six is still Scooby-Doo titles, which are likely safe for the time being. Not sure how much longer Young Animal line is going to be allowed to survive with these kinds of numbers in its first year, but new titles were announced at NYCC, so we’ll see. I just don’t think this line has the staying power of Vertigo. Astro City, however, seems to have plateaued at it’s sweet spot, just shy of 10k.

Meanwhile, over at Marvel, where things are only slightly better:

Zombies Assemble 2 lost over 40% of its readers from the previous month. This is only issue two, so this is strictly due to pre-orders. Moon Girl continues to baffle. This time 3 years ago, Elektra was cancelled when it was selling twice as many copies monthly. Not sure what to make of this, but its numbers hold steady, losing only 4% of its readers from last month and only 10% over the last 6 months. It’s found its audience, it’s just a very small audience. Nick Fury continues to drop like a rock, losing over a thousand copies per month with and a 74.8% decline for the past six months. I don’t think anyone really cares about James Robinson’s take on the Sam Jackson version of Nick Fury, which surprises me. Guardians has several off-shoot titles out there, all under-performing (Rocket and Groot titles are both around 12k each). This title is based on a video game series, not sure if it’s an ongoing or not. In Jim Shooter’s day, ‘America Chavez‘ is beyond close to being called DOOMED…! – but that’s another title I can’t understand why it’s still on life support. It’s losing over 1500 readers per month. Not sure it will make it to 12 issues. And everyone’s favorite rodent warrior princess, Unbeatable Squirrel Girl is still steadily losing around 1000 readers per month, but only 16.5% over the last 6 months. This may be another of the Scholastic & “digital sales!” titans we keep hearing about.

None of these titles are announced as being cancelled, although the Guardians title is based on a video game and I expect it is a limited run.

Information here is based on numbers presented by Comichron and are direct to retailers order numbers, not sell-through to consumers.