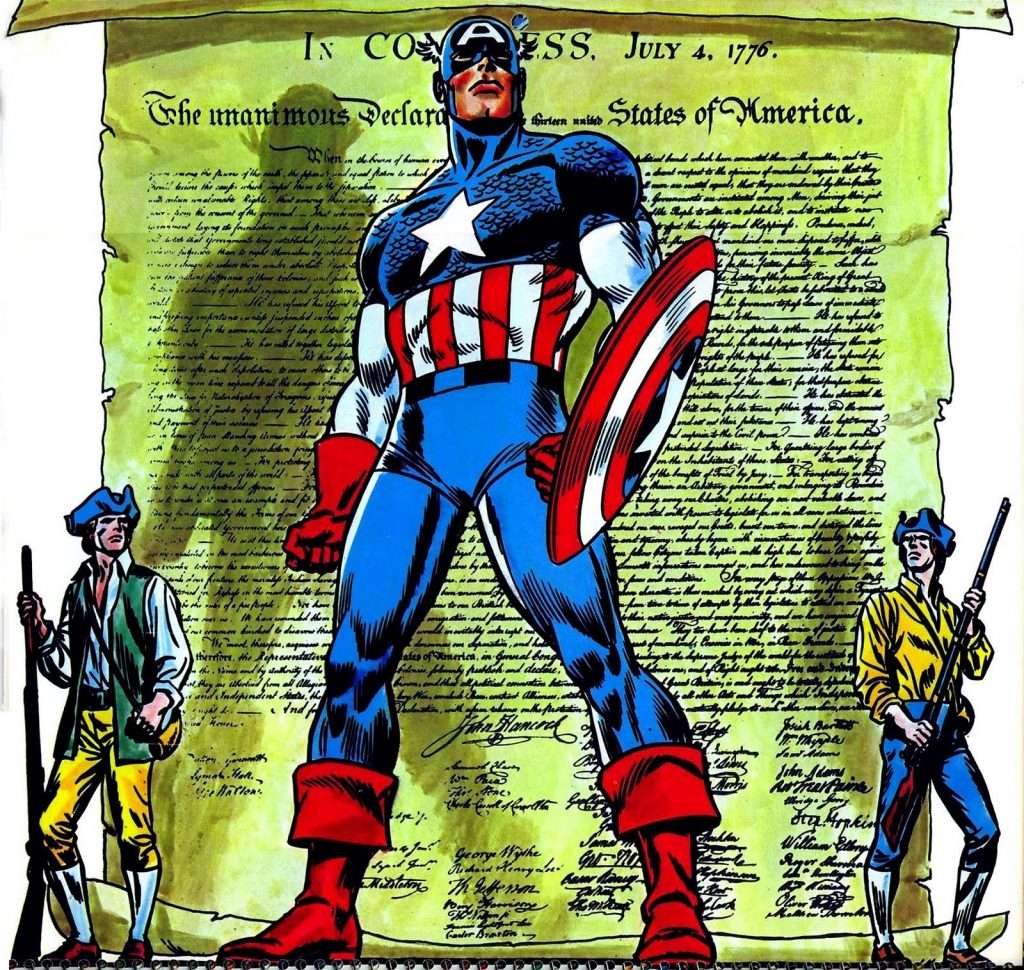 Does Marvel have a death wish?

Bounding Into Comics reports that, according to “three solid sources,” the powers that be at Marvel are “so concerned that the character of Captain America has been ‘stolen by conservatives’ that they will soon be returning Chris Evans to the role in order to have him specifically distance the Star-Spangled Avenger from what they consider to be his ‘uncomfortable patriotism facets.’”

It seems that Hollywood doesn’t like it when Trump supporters wear Captain America gear at MAGA — Make America Great Again — events. Not to mention, Evans allegedly “loathes the portrayal of Captain America as an America First superhero.”

In effect, these big brains believe Trump/MAGA supporters are akin to the Captain America (and Bucky) of the 1950s … except without the misfortune of succumbing to an incomplete super-soldier procedure:

“Reportedly, Kevin Feige was open to doing a project in which both versions of Captain America would come together somehow to repudiate the perceived negative aspects of America while still finding a cause to believe in,” [the sources reportedly] said. “The leaders of the MCU reportedly dislike that they did not address the issue before Chris Evans retired from the character. They felt that having an African American version of the character bare such a burden alone was unfair.”

Perhaps no single panel signifies what Cap is all about than the following from the classic Frank Miller/David Mazzucchelli Daredevil arc “Born Again”: 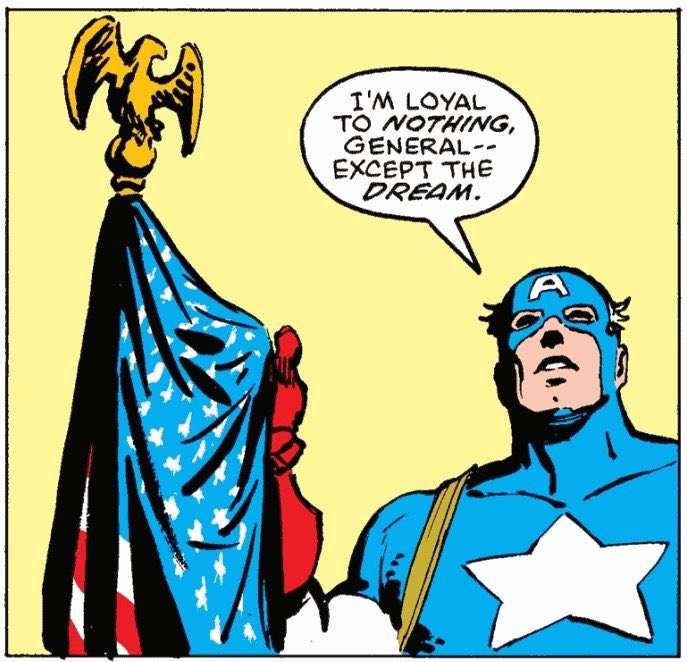 And, of course, there’s Steve Englehart’s “Secret Empire” storyline from the early 1970s which is not-so-subtlely tied in to the Watergate scandal. That arc’s conclusion had the Secret Empire’s Number One — in reality Richard Nixon — kill himself rather than be brought to justice by Cap. As a result, Steve Rogers renounced the role of Cap for a time. (In reality, Nixon’s crime was covering up and impeding the Watergate investigation — in which Nixon operatives ultimately were convicted for breaking into Democratic National Committee headquarters in 1972.) 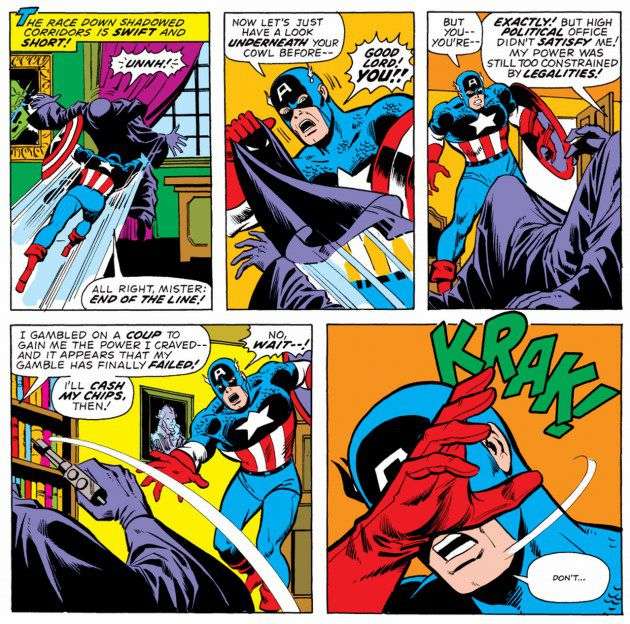 Rogers gave up the Cap role a second time in the 1980s when the government decreed that his shield, and the very concept of Captain America itself, were the property of the U.S. government. In effect, Cap was no longer a free agent — he would work for the feds. There are innumerable other examples which show that Cap isn’t a rah-rah, America-can-do-no-wrong lunkhead. John Byrne’s early 80’s Captain America run had an issue where Cap pondered a run for president himself — which he ultimately decided against because, again, he has to represent the dream. Be above it all. 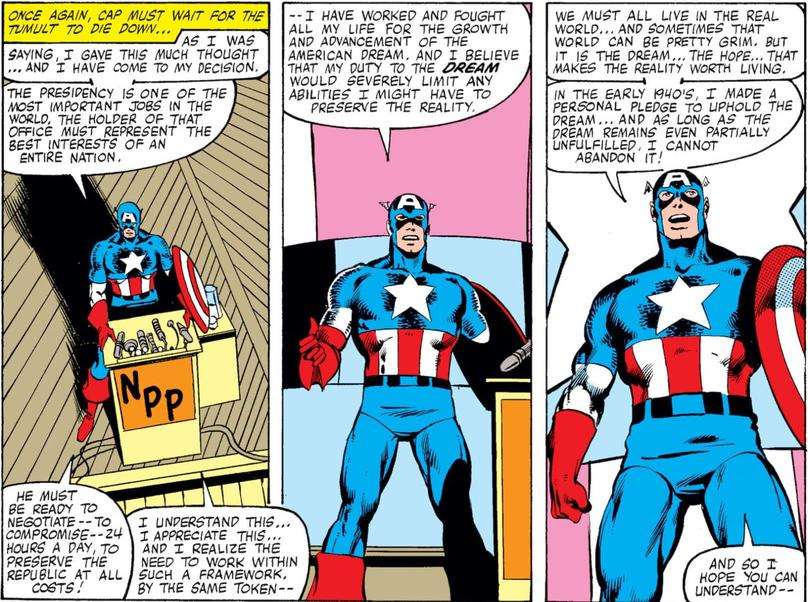 Now if Marvel Comics and Marvel Entertainment had any balls they would do a story about something that is a much bigger scandal than an incumbent, paranoid president ridiculously worried about an opponent he knew he would crush in the ’72 election — and that is the Democratic Party campaign against Donald Trump since 2016.

One does not have to be a fan of, or even like, Donald Trump to realize that the phony Russian collusion scandal manufactured by the Hillary Clinton campaign and fostered by our own FBI is magnitudes worse, especially since after the scandal was revealed to be bogus no one paid any price … except for Donald Trump. The recent FBI raid on Trump’s civilian residence is the straw that broke the camel’s back on this continuing injustice. The main difference between now and 50 years ago is how the FBI acts, and now the media is cheering on the current presidential administration.

But if these rumors about Chris Evans coming back are accurate, Marvel is chock full of eunuchs. And don’t count Steve Englehart in either; back in 2017 he said Trump “breaks the laws right and left, lies about it and we’re in the middle of a situation where he says ‘Come and get me if you can’ and he’s doing everything he can to keep people from getting to him. I like to hope that we will, eventually.”

Being that much has happened in the intervening five years, maybe Steve’s changed his tune. But I haven’t found anything to indicate that.