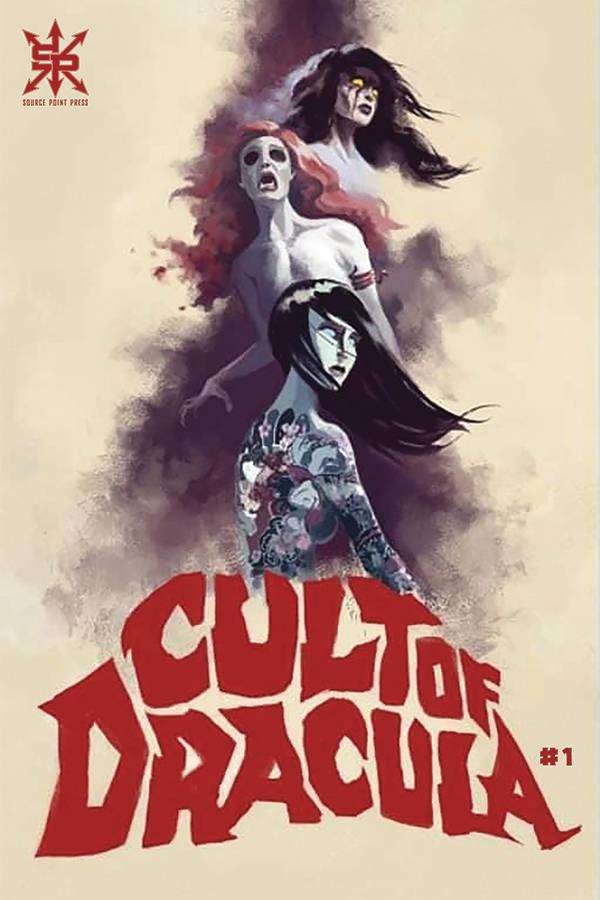 What if you could mash-up true crime detective comics and horror stories that retold Bram Stoker’s Dracula with the history of Charles Manson? The result would be Cult of Dracula from creator Rich Davis. This unique re-imagining of perhaps the most famous tale of gothic horror ever written was a hit with Source Point Press, and if you missed the limited series, it’s now being collected in a trade paperback being solicited this month in Previews.

In Cult of Dracula, Davis weaves vampire mythologies with occult traditions from around the world using a tragic tapestry tracking a fallen bloodline and a hippie cult dedicated to an ancient blood goddess. You may know Bram Stoker’s horror classic by heart, but Cult of Dracula mixes the legends up in an intriguing new way.

I recently chatted with creator Rich Davis, who before he became a comic creator owned and operated a pub / theatre for nearly ten years, writing and directed plays, and even performed in quite a few, When I asked how that led to comic books success, Rich shared, “I feel like I’ve sort of snuck into this really cool party. I don’t know how long they’ll let me stay, but I intend to enjoy every minute before someone figures out I don’t belong!”

“Believe it or not, there was a time when I wasn’t really into comics or reading at all for that matter.” Rich continued, “When I was a little kid, I was absolutely convinced that I would grow up to play baseball for the Atlanta Braves. I never wanted to read. My parents were clever. Whenever I’d do well in school or finish all my chores or play well in a baseball game, they’d reward me by taking me to the comic book store.” 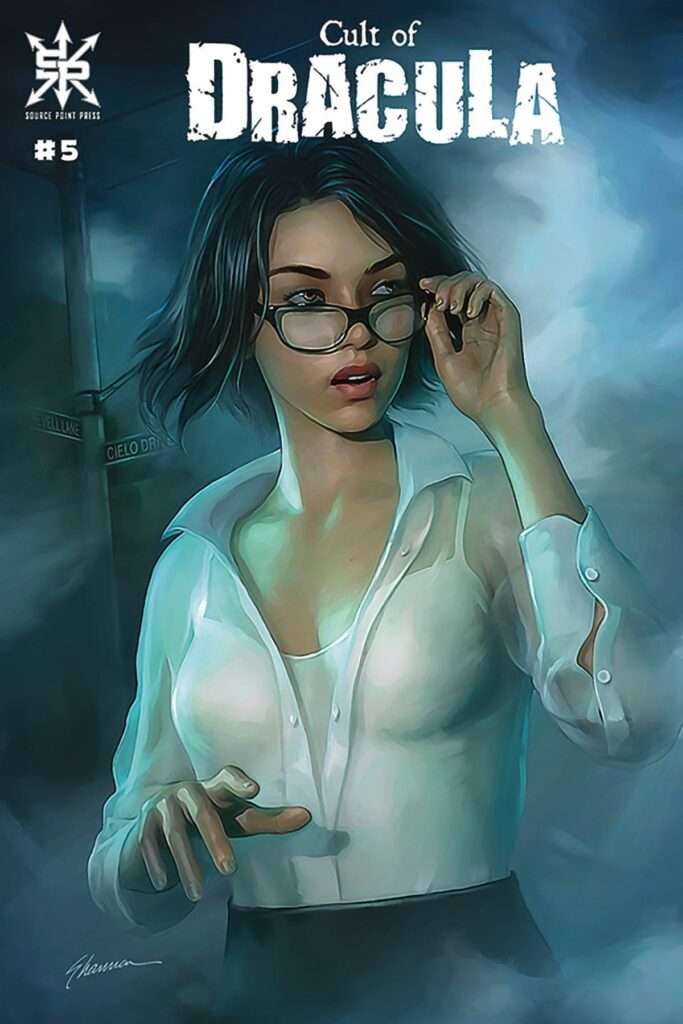 That store was Bob’s Collectors Den in Cookeville, Tennessee, “Bob always treated me with openness and respect. He took the time to learn my name. He welcomed me to his shop. He helped me pick out my comics and was always happy to talk with me about them. It was the great kind of experience that every kid deserves to have. I fell in love with comics because of that experience. It opened up a whole new world to me. I discovered that I actually enjoyed reading thanks to comics. From there I graduated to short stories, then novels. I became a voracious reader. Now I read every day. All because my parents tricked me into trying something new and a really cool old shop owner was nice to me.”

Stories featuring Dracula have been around for longer than most comic book readers, so when Rich first pitched his idea to his friend George Jeanty, he challenged Rich to do something that elevated the genre, that horror comic lovers would embrace. 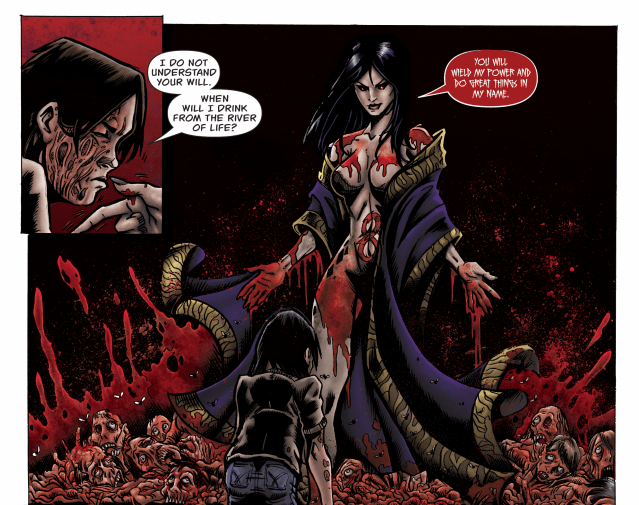 Before long he found Carmilla, a character from Irish folklore from whom Stoker took many of the inspirations for Dracula’s powers.

“That sent me down the rabbit hole of researching Irish folklore in a broader context. That sent me to Scotland, then to the rest of Europe. Then Africa and Asia. Finally my mind ended up back home here in the US. I was reading all about scary stories and religious mythologies from all across human history. I began to notice a common character present in almost all of them. It’s almost always a woman. An outcast woman forced to exist on the fringes of society. She stalks the darkness and steals naughty children from their beds. She sustains herself by feeding on their innocent blood.”

That’s when a lightbulb went off and the central idea hit him. What if Dracula was each of the horrific figures in history and folklore and all of these creatures were Dracula? 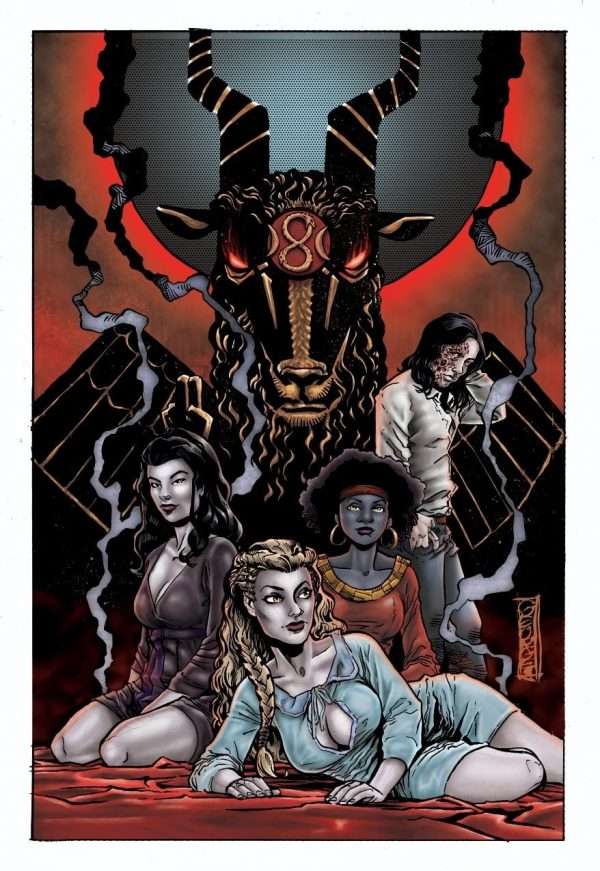 “What if Vlad the Impaler was just one version of Dracula interpreted by one group of people in one time and one place? What if there were others in other times and other places? That opened up a whole new world of storytelling possibilities. That’s how this book is different from any other version of Dracula. Every version of Dracula we’ve ever known is Dracula. All that changes is our own personal perspectives and points of view. That’s a common theme in Cult of Dracula.”

Cult of Dracula was originally written as a stage play that won multiple awards and played to sold out shows at his Browncoat Pub & Theatre in North Carolina.

“From there I was inspired to develop it as a screenplay. Wilmington is a great film town with an incredible community of gifted filmmakers. I thought I could turn it into an ultra low budget indie horror film. My idea was to put it on YouTube for free with hopes of generating ad share revenue. That was not to be, however. My wife Amber was diagnosed with stage four chronic kidney disease. It was incurable. She would need dialysis and eventually a kidney transplant. There was no way that I could divert the time, energy and resources required to produce a film. Amber needed everything I had and I was absolutely committed to giving it to her. I actually deleted the script for Cult of Dracula.” 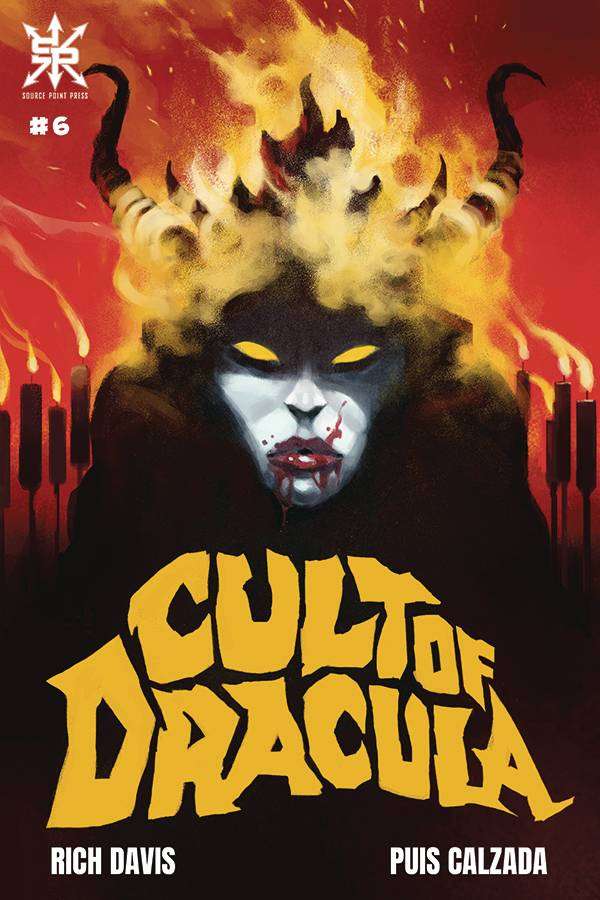 To say his wife was displeased would be an understatement.

“Amber had never been more pissed at me! She was livid! She dressed me down with ferocity that would have made R. Lee Ermey blush. Amber never once gave up on me. She wasn’t going to allow me to give up on myself. She had saved an older draft of the script that I’d sent her. She gave it back to me and insisted that I keep going. My penance was rewriting all the things I’d lost between her early draft and the one I deleted. It was Amber’s idea to develop Cult of Dracula as a comic book. She understood that we could no longer realistically produce a film, but there was no reason that we couldn’t create a comic. So I set about doing just that.”

Once the comic was ready, he set out to find a publisher, but with his lack of experience and then the pandemic, opportunities that did present themselves began drying up. Then Rich got an email from Marcus Roberts who was launching a new comics publishing house called Second Sight Publishing. 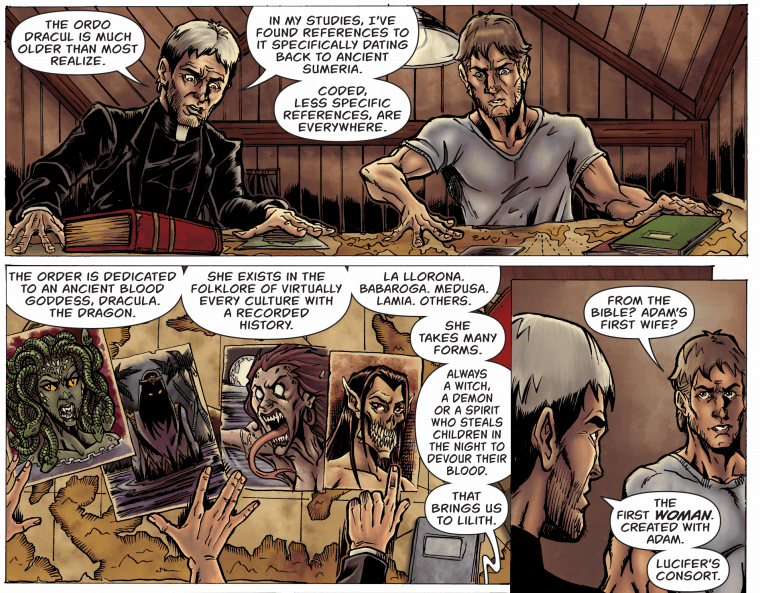 “They wanted Cult of Dracula to be their first comic book. I didn’t hesitate. I knew all I needed was someone to publish the book. I was resolved that I could take it from there. And I did.”

The book became a respectable, but unexpected hit with Second Sight.

“Nobody expected Cult of Dracula to sell as well as it did. We sold more than 10,000 units of the first issue from Second Sight. We weren’t prepared for that. They weren’t prepared for that. They didn’t have the infrastructure in place to handle those numbers. They weren’t in Previews yet. They didn’t have a distributor. They were just getting started. To their credit, they were mature enough to acknowledge that they’d helped me take Cult of Dracula as far as they could. They didn’t stand in the way of me shopping it to other publishers with the resources and infrastructure to take it further.” 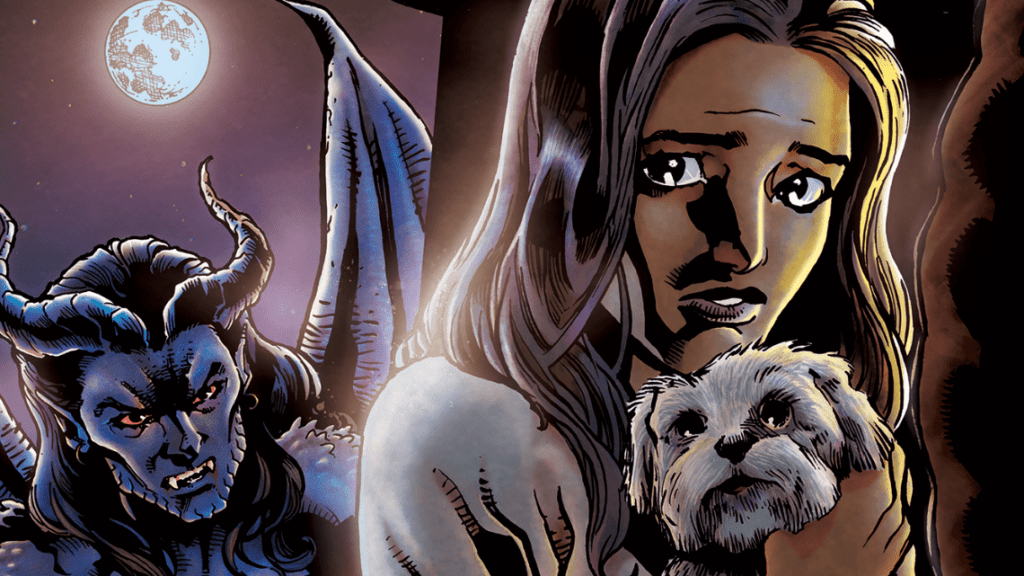 “It shouldn’t be possible, but Source Point Press has helped me take Cult of Dracula to even greater success. Every issue has sold out at the distributor level so far. We’re expecting the trade paperback to do exceptionally well. Readers are enjoying the story. We’ve got a TV series in development with Sure Pictures. It’s a crazy ride, man. It really is.” 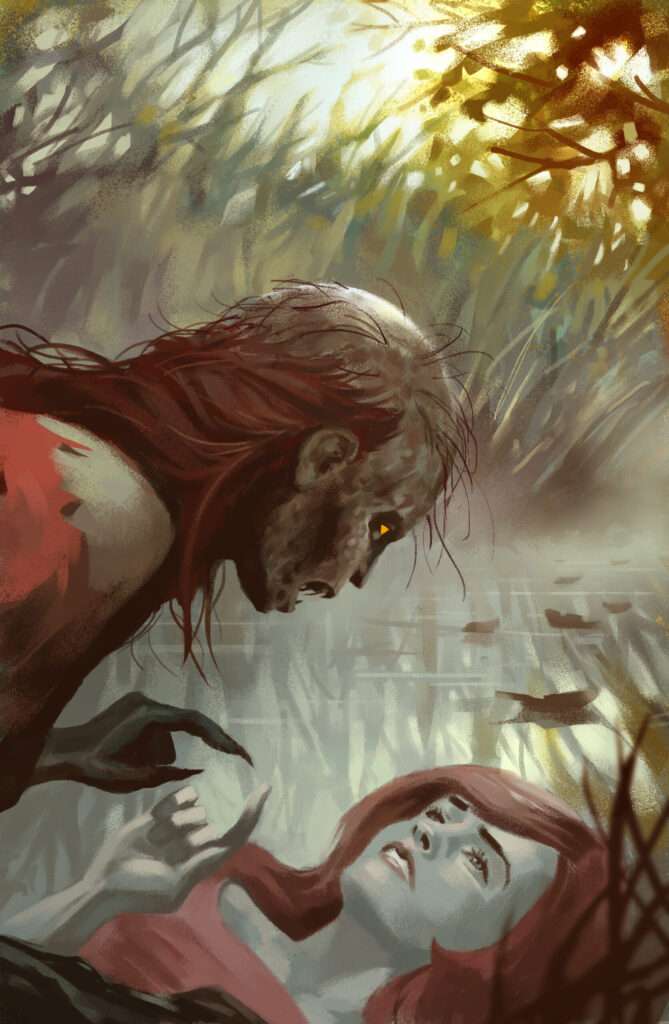 Now that the first series is wrapping up and being collected in a trade, Rich discussed his future plans for this universe he’d created.

“I’ve always envisioned Cult of Dracula as the first volume in a Dracula trilogy. Each volume is inspired by a different style of horror. Cult of Dracula is like a Tobe Hooper film. It’s like Texas Chainsaw Massacre. It’s an intimate, Southern Gothic story focusing on a small group of weird people. Rise of Dracula (2022) is more inspired by John Carpenter. It’s a dystopian horror story set ten years after Cult. Reign of Dracula (2023) is a full on George Miller, Mad Max end of the world extravaganza! If I get to do it the way I want, it’ll be absolutely bananas!” 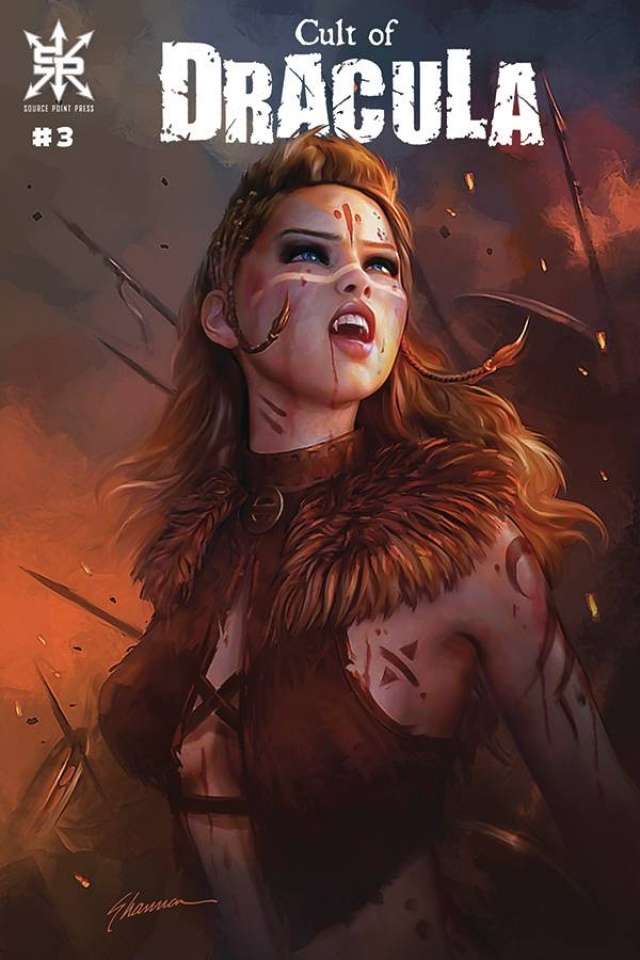 Cult of Dracula is currently in development as a television series with Sure Pictures with Jerry Carita producing. Davis couldn’t say TOO much about this aspect of the story, but did share this. “The project has garnered strong interest from a prominent network. Jerry and I have had very productive meetings with potential cast and directors. Names horror fans will easily recognize. It’s going to be really cool when we can finally let the crazy loose!”

Rich is also working on other stories with Source Point Press and he’s even got a short story being published by Blue Juice Comics, part of a horror anthology they’re releasing sometime later this year.

“I’m planning to keep doing this for as long as they’ll let me!”

The collected trade of Cult of Dracula issues 1-6 can be found in this month’s edition of Previews and is scheduled for release in October.