‘Ravage: Kill All Men’ & Other Tales from The Cautionverse 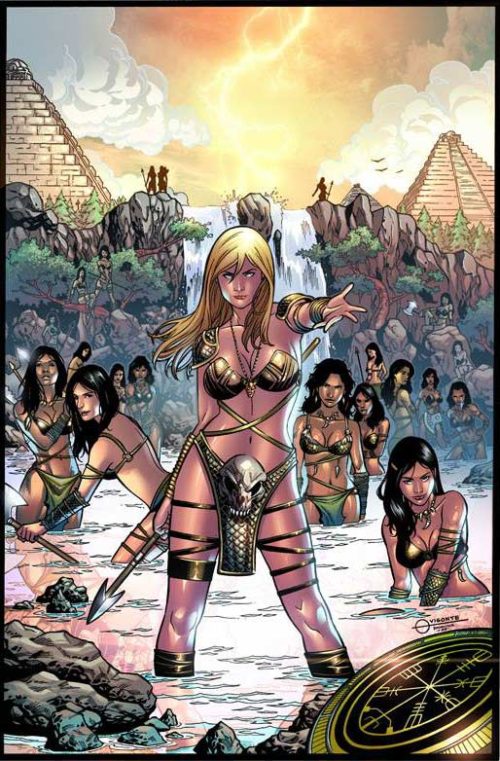 “Two Hunters crash in a mystical jungle populated by a lost tribe of Warrior Women that hunt men, mate, then kill them. The men must escape, change to survive, or die trying.” that’s the pitch for ‘Ravage: Kill All Men,’ one of a new series of titles from Cautionary Comics, founded by Chuck Dixon and Benjamin L. Henderson.

‘The Cautionverse,’ as Henderson bills it, will be a shared universe targeting three different age groups from K-6, Middle School and ages 16+. While all the stories intertwine, the content is age appropriate. Launching first will be their ‘mature’ line of horror, action and suspense titles followed by ‘Cautionary Tales’ for parents and children ages 2-15.

Ravage: Kill All Men is rated as ‘mature’ and is being written with Chuck Dixon (Batman, Punisher, Bane) along with art by Jimbo Salgado and colors by Bryan Arfel Magnaye. The story takes place in the mystical land of ‘the Protectori’, home to an ancient race of warriors that are sworn to stop the evil of  an ancient cult from a long forgotten race that worship nothing but their lust and the One-Eyed Demon. In addition to the fantasy-horror comic series, a video game is also in the works with an open world MMORPG set in The Cautionverse allowing players to explore the world of RAVAGE.

I recently corresponded with Benjamin L Henderson, the editor-in-chief of and the mad genius behind Cautionary Comics, about how it all began. He’s QUITE the storyteller:

(JA) When and how did Cautionary Comics come together?

(BH) Well, It’s a long involved story. I went on a walkabout in Australia which is where I got my magic hat. That is where I began re-writing all of my old screenplays into new comic book sagas in a shared universe I call THE CAUTIONVERSE. Oddly enough after I met Chuck (Dixon), and we had a chance to finally share stories, I found out that he was also on the same walkabout, but had left just a few days before me.

From there, I chartered a small plane to fly me to Varanasi to attend The International Psychic Spoon Bending gathering to meet my friend and fellow student Miquael Res. Where our guru hosted us over a dish of fried Lentils and Bhang Lassi. A wild-eyed distinguished American Man won the spoon bending competition that year and I came in second. I later found out that the man who won the first prize was none other than Chuck Dixon. I could not tell who he was at the time due to my over consumption of Bhang Lassi.

After the competition, I felt a calling, a great pull, to return once again to Atlantis. So I chartered a small boat, got into a few adventures on the way, and headed out to once again face The Bermuda Triangle. I finally arrived at the Bimini Trail, the entryway to the Lost City Of Atlantis, and equipped my scuba gear. An eerie feeling washed over me as I dove down. Which was odd as this was not my first time exploring The Bermuda Triangle and all of my previous visits to Atlantis have always been positive.

That is when I saw a shimmering light. As I swam closer I began to make out a figure in scuba gear and a purple headlamp floating down in the depths near the secret passageway to the Atlantean Treasure Vault. 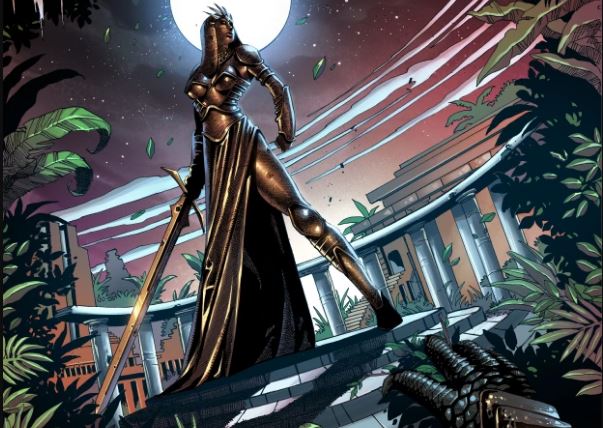 Someone was there waiting for my arrival! Someone knew I was coming! We both rose toward the sun so that we could speak. We broke the ocean surface, and as my eyes adjusted to the Florida sun, I realized that it was none other than CHUCK DIXON! He said only one sentence to me and I will never forget it, “ He asked me what my favorite James Bond movie was and seemed pleased with my answer.”

Feels like just yesterday! I’ve been his Apprentice Fictioneer ever since. The old saying is true when the Apprentice is ready the Master will appear.

(JA) Ravage: Kill All Men seems like a response to the current state of comics. Can you tell me about your feelings on the state of comics & comics publishing today?

(BH) I did get the drive to launch Cautionary Comics based on the decline of the Comic Book Industry. I’ve traveled THE WORLD for over Twenty Years and had favorite comic book shops almost everywhere, and sadly many of them are now gone. The Internet taking off most certainly impacted Local Comicbook Stores (LCS), but I saw something more systemic. The slow but constant decline in Storytelling and Artistic Aptitude. This is the result I felt of too many in the industry making it their agenda to indoctrinate people into their worldview and forgot how to entertain.

I decided to take action, and have started multiple efforts including Cautionary Comics, an Augmented Reality Engine for Comic Books which will offer motion comics viewed special eyewear, as well as RAVAGE ONLINE the video game which will be ready for alpha testing soon. We also have a group of like-minded individuals who are looking to purchase failing LCS’s and revitalize them to make them more Entertainment Forward. 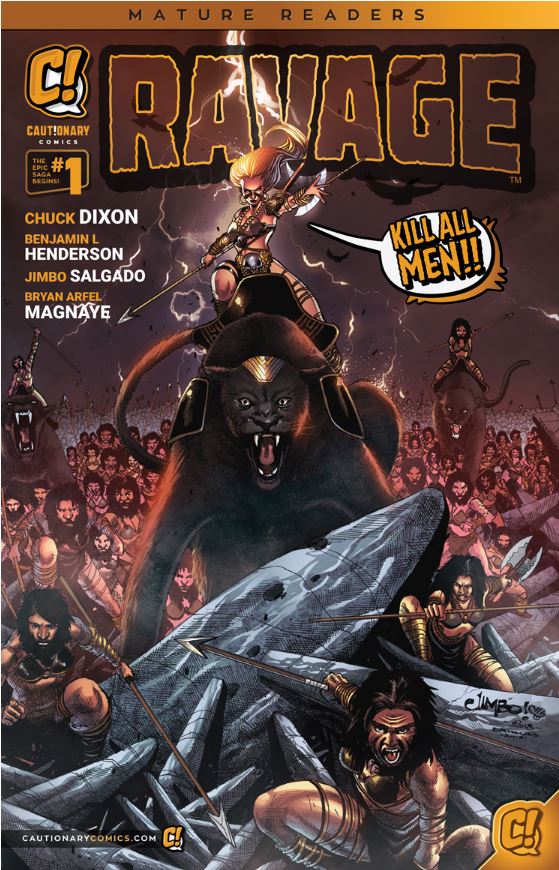 (JA) Tell me more about Ravage: Kill All Men!, beyond the pitch we read online. What is the era, the POV, and what are you excited about most that readers can expect from it?

(BH) RAVAGE – KILL ALL MEN! Is a multipart saga set in the modern day and follows the adventures of Manny Mendez and Randy Gunn. Two army veterans, that crash into a mystical jungle. They are trapped in the Land of The Protectori, an Ancient Race of Warrior Women that hunt, enslave and kill men. The story explores what people are calling “Toxic Femininity” and “Toxic Masculinity” and what happens when those forces collide.

(JA) Why did you decide to use IndieGogo to launch the title and how is that working so far?

(BH) We LOVE Indiegogo! It was very easy to use and get set up, plus it becomes an online store after the campaign is over. The response has been great we met 25% of our goal in only two days! We have been overwhelmed by the love and support of everyone who has joined us already and who are yet to come!

(JA) If the crowdfunding is successful, are there plans for Ravage to become an ongoing series? If so, do you plan to use the standard distribution model?

(BH) Yes, we are! This is an entire pre-planned 50 title comic book universe with a deep well-crafted mythology in place, as well as well-crafted characters with flaws, strengths and human emotion that grow throughout the Saga. We are planning for standard distribution. We have enough content for several graphic novels for each of our titles, so our amazing customers will have New Fresh Entertainment that ONLY focuses on STORY, Character, Action, and Fun for a long-long time to come!

(JA) I know Chuck has been an outspoken conservative in the comics industry. Is there a conservative message or similar attitude readers might find in Ravage?

(BH) I want to create a universe where you are welcomed and entertained, not isolated. We don’t have any heavy-handed messages in our books. Our mission to make Comic Books that focus on STORY, Character, Action, and Fun!

(JA) What can we be looking for beyond Ravage #1 from Cautionary Comics? What other projects, if any, are in the works?

(BH) Wow! Well, I hope all 50 of my stories become Comic Books. That’s my goal. Next up is “THE MAGUS – Inner Demons”, “KILTER – Bad Dreams” and “THE OFFWORLDER – The Protectors of Sa’Ra.” However, we also have Children’s titles such as “The Pirate and the Witch – A Tale Of Two Magical Houses”, which is a OGN for kids ages 2-6 dealing with their parents divorce. We also have universal titles such as “TERRAFORMA” which takes place in the year 2188 which follows the story of a broken human soldier from the last American war who awakens an imprisoned Martian general that resumes his holy war to eradicate humanity from the cosmos.

Jump on their Indiegogo page here to get your copy along with several other great perks.