After the death and drama in HOUSE OF X #4, writer Jonathan Hickman and artist Pepe Larraz had fans wondering what would become of their favorite X-Men. After all, it’s not every day that Cyclops, Wolverine, Jean Grey, Mystique, Nightcrawler, Archangel, Husk, and M die. But this week’s HOUSE OF X #5 was a real game changer… 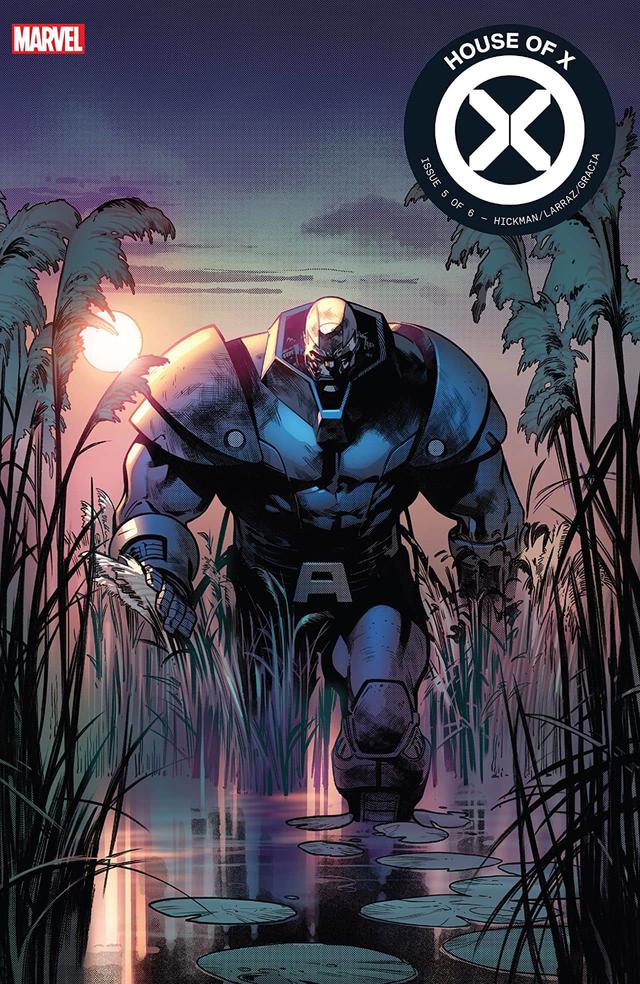 Because it means the X-Men no longer have to fear death.

However, it does raise several questions that the story doesn’t attempt to answer…yet. One of the joys of Hickman’s relaunch is how he’s been inspired by several aspects from key X-Men runs of the past. In this case, Hickman took a minor character from Brian Michael Bendis’ X-Men run and gave him a new purpose; it turns out that Goldballs’ power isn’t useless after all… He creates eggs that can be used to give mutants viable new bodies. But this only works in conjunction with the powers of fellow Bendis creation, Eva Bell, as well as Proteus, Elixir, and Hope Summers, the Mutant Messiah.

It seems that Hope is finally living up to her billing, since her powers allow the other mutants to pull off the resurrections while Professor Xavier uses Cerebro to put their souls back into their bodies. It’s easy to believe that Xavier can back up their minds, but their souls are another matter. Can any machine truly copy and restore such a thing? If the X-Men were to visit the afterlife again, would they encounter their souls there? The first few issues of Jason Aaron’s AMAZING X-MEN (2013) established that Nightcrawler gave up his eternal reward in Heaven to return to Earth. And he was under the impression that he could not return to Heaven again. Was he right?

Jean is somewhat cheeky when asked by Storm if she is who she appears to be. “I’m the only ‘me’ that ever was,” says Jean. But between Jean, Phoenix, and Madelyne Pryor, there have been at least three Jeans—or four, if we’re counting the Teen Jean who spent a great deal of time in the present alongside the other original X-Men in the past.

Readers also have to wonder if the resurrection has left Wolverine with bone claws again. Adamantium is not a biological component, and it probably isn’t easily recreated. There’s also the question of what happened to the X-Men’s bodies from their suicide mission. Nightcrawler, Mystique, and Wolverine’s bodies were lost to space. But there’s a chance their enemies have the rest of the bodies. What might they do with that genetic material?

Another new aspect of the story is a ceremony held to celebrate the return of the previously deceased X-Men. Storm leads a fanatical call-and-response, heralding the new dawn of the mutants. What does this mean in a larger context for her, how she’s changing, and who she’ll become? What does this mean for the X-Men?

The larger implications of Xavier and Magneto’s plans have also begun to play out. With their resurrection process, they may have the ability to bring back the millions of mutants who were slaughtered in Genosha. The implications of that would be huge, because it means that mutants would once again have a significant population, no longer facing extinction. But that doesn’t mean that new threats still aren’t on the horizon.

The issue closes with a stunning moment as Xavier and Magneto welcome several of their former enemies to Krakoa. Exodus, Sinister, Apocalypse, and more have come under their banner. It’s a shocking alliance that looks like it’s going to change the X-Men forever. Readers might think that even the world’s most powerful telepath should watch his back with friends like these, but there are still more surprises to come as HOUSE OF X and POWERS OF X race towards the finish line…and the Dawn of X.

HOUSE OF X #5 is in your local comic shop this week!