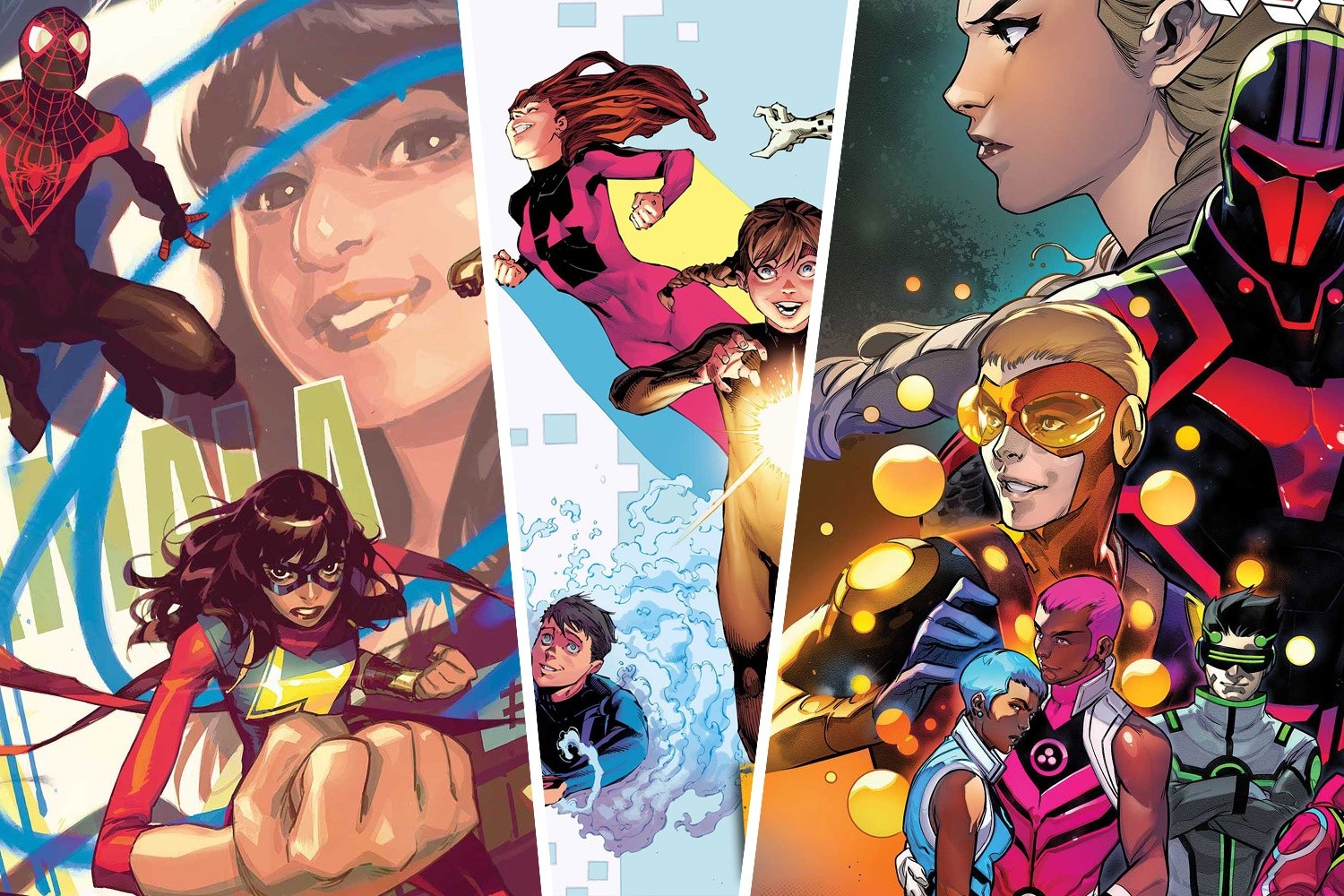 Two notable Marvel series from the 80’s and 90’s are being relaunched, spinning out of the needless event called Outlawed, instead standing on their own. The first, reported by ComicBook, is Power Pack in a miniseries:

Marvel is bringing back the Power Pack. Spinning out of the Outlawed event, The Unbeatable Squirrel Girl writer Ryan North teams with artist Nico Leon to reunite Katie, Julie, Jack, and Alex Power for new five-issue miniseries full of superhero family adventures. The first issue will ship with a cover by Absolute Carnage artist Ryan Stegman, plus a variant by Leon and another by Eduard Petrovich.

“I loved working with [editor Sarah Brunstad] on Squirrel Girl, so when she asked if I’d be interested in doing a miniseries with her I said YES – the fact I get to work with the Power Pack is just gravy,” North says. “It’s also fun doing a limited series – a story with a complete beginning, middle, and end – because it lets you structure the story differently, to build in things that you just can’t do in an ongoing series. For readers who have loved the Power Pack since their introduction in 1984 to those who maybe haven’t even HEARD of them yet, I hope you’ll check them out. They’re a group of four siblings who get superpowers but still keep all the issues you get when you’re in a group of four siblings, people you love and sometimes hate and have known in some cases your entire life. It’s hard! But it’s also a lot of fun, and that’s what we’re hoping to capture in this story, along with an examination of what being a superhero actually means.”

I think the writer of SJW-pandering series like Squirrel Girl is reason enough to avoid what’s coming up next. Who knows what he could concoct in even 5 issues. Speaking of which, I’m actually surprised if it’s only that long, recalling that since the early 2000s, it was heavily mandated only so many story arcs be as long as 6 or more parts, for the sake of trade collections. If that’s what concerns the Big Two so much, they should’ve gone exclusively paperback/hardcover long before, and not wasted so much money on two different formats.

The second series concept being relaunched is one where Alex Power went on to make appearances in, New Warriors, and here’s what Screen Rant says about it:

Marvel is rebooting the New Warriors in their own series this year as a part of the fallout from Outlawed. Writer Daniel Kibblesmith (Loki, War of the Realms: Omega) and artist Luciano Vecchio (Ironheart) will be responsible for crafting a whole new era for these “Heroes for the 90s!” Kibblesmith and Vecchio promise to deliver new twists rooted in some delightful nostalgia to bring the team into the 2020s without losing the core of its origins in the 1990s. And don’t worry, Night Thrasher’s skateboard has survived the transition.

The New Warriors first appeared in the pages of The Mighty Thor #411 in 1989, and proceeded to help define Marvel’s ’90s generation. The turn of the century was not kind to these young heroes, however, as the team was decimated in a brutal event that basically kicked off Civil War. While they have been in and out of Marvel continuity (casually saving the world, etc.) after the events of Civil War, in recent years, the New Warriors seemed to be slowly fading from the Marvel consciousness. Somewhat ironically then, it is a philosophical cousin to the infamous Super-Human Registration Act, a law banning underage superheroes that will give the team a chance not only to reassemble, but also reclaim their superhero legacy. This time around, instead of being the new kids on the block, the New Warriors will be stepping in to guide a new generation through the fallout of Kamala’s Law in the wake of Marvel’s Outlawed.

Reading this, I gotta wonder again, what was so great about the 2006 Civil War crossover when the New Warriors were turned into sacrificial lambs? Didn’t any alleged Marvel fans who bought into CW over a dozen years ago find it dismaying? SyFy Wire interviewed the writer, who said:

I know you’re a big comic book fan. Can you tell us a bit about your familiarity with the New Warriors before taking on this book?

I wasn’t that familiar with them, to be honest. Most of the comics I read growing up were from my dad’s Silver and Bronze Age collection, so I was a ’90s kid on paper, but a ’60s kid in practice. When NW #1 dropped in 1990, I’m sure I saw it on the shelf at One Stop Comics on Ridgeland, but I don’t think it would’ve registered unless Spider-Man or Nightcrawler were on the cover.

It wasn’t until later when I started reading my friends’ comics at their houses and assembling my larger understanding of the Marvel Universe that I realized there were all these other things that had happened in the decades since — and were still happening every week. Even at the time, I thought it was a grievous injustice that the New Warriors had to share one Overpower card. Same for the Inhumans. I’m not over it, clearly.

Something tells me he’s still not familiar enough with them, and if this builds out of a crossover involving a character as politicized as the Muslim Ms. Marvel is, that’s why it doesn’t stand well on its own.

It’s one thing to revive 2 notable team titles, but another entirely to base the existences of these reunions on crossovers. That seems to be the only way they can think of reviving and relaunching certain concepts today, and so, again, we have an example of the Big Two’s inability to launch creations on their own without spinning them out of a publicity stunt. Maybe that’s why the PP story so far is only a miniseries.