First, we need to establish the mood… press play, then continue reading.

I’ve long been a fan of Marvel Comics’ villainous Hellfire Club, in fact I much preferred them (at least in their early incarnation) to their main foes, The X-Men.

Created by Chris Claremont, the group first appeared in 1980’s UNCANNY X-MEN #129-134. In that Chris Claremont-John Byrne epic, we first met one of the shadowy group members of a rather kinky billionaire mutants, who adopted 18th century dress and used upscale private clubs for the super-rich and powerful as a front for their many nefarious schemes. Marvel’s Hellfire Club have their origins in both real life and fiction.

Yes, there was an actual Hellfire Club – with their most famous headquarters not too far from where I live – the Hellfire Caves in West Wycombe Park (Bucks, England):

Earlier the Club met for their revels at nearby Medmenham Abbey, by the Thames. That medieval ruin was renovated to resemble a Gothic structure, with this theme written in stained glass at the entrance: Do What Thou Will. An injunction later adopted by Alistair Crowley, the so-called ‘Wickedest Man in the World’.

And prior to this, at the rather more prosaic George & Vulture pub in the City of London:

The Club has contributed to the DNA of Claremont’s creation, but he also took inspiration from a number of other sources in the realm of fiction.

The writer drew on a number of TV shows and films for the peculiar ethos of the Hellfire Club.

Claremont acknowledged a huge debt to a 1966 episode of the cult ITV show The Avengers (no relation) entitled ‘A Touch of Brimstone‘ where Diana Rigg’s Emma Peel encounters the perverted denizens of the club:

Av3ngers - a touch of brimstone

He also used the film world as a source for the names and appearances of some Hellfire Club characters.

The Black King -and leader of the Club Sebastian Shaw (an absorber of kinetic energy), by the actors Robert Shaw and Star Wars’ ‘de-shelled’ Darth Vader Sebastian Shaw (name only):

Seb Shaw as Darth Vader (Return of the Jedi), not looking too chipper tbh

Density master Harry Leland owed a lot to Orson Welles, with his tubby frame and name that was a reference to Harry Lime from The Third Man and Joseph Cotten’s Citizen Kane reporter Jed Leland 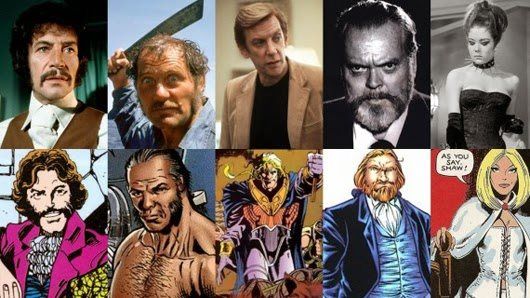 I can see something of the Club’s disreputable activities in the flashback sequence at the beginning of the 1959 Hammer adaptation of The Hound of the Baskervilles:

"The Hound Of The Baskervilles" - excerpt

A couple of years later, Hammer made a picture about the original HellFire club, but it was lacklustre.

2011’s X-Men: First Class wasted the premise of the Club – which in the movie appeared like SophistiCats on a wet Wednesday afternoon:

Check out this fan attempt. Well at least they tried…

And finally a two-fer for you patient folk.

Not so hidden meaning in this comestible ad?

1985 Club Biscuit If You Like a Lot of Chocolate Advert
David Essex - Me And My Girl Night Clubbing
‘Ooh, the sweet feeling of dancing close together
And the heavy, heavy sound of pop music
Teenage hero, fashion dummy weirdo
I like your pink lipstick’

Couldn’t have put it better myself.