Jim Gordon Out as Gotham’s Commissioner in DC Comics’ Latest?

What happens if James Gordon is no longer the Police Commissioner of Gotham City? The answer to this question is being played out right now in James Tynion IV’s current storyline in Batman and the tie-in franchise books of the Bat-Family, “Joker War”.

The Batman character is often depicted as a dangerous and extralegal vigilante and he certainly is those things. However, he has almost always operated with the full or tacit approval of the Gotham City Police Department thanks to his unique partnership with GCPD Commissioner James Gordon. How will things change when he’s replaced by Lieutenant Harvey Bullock? 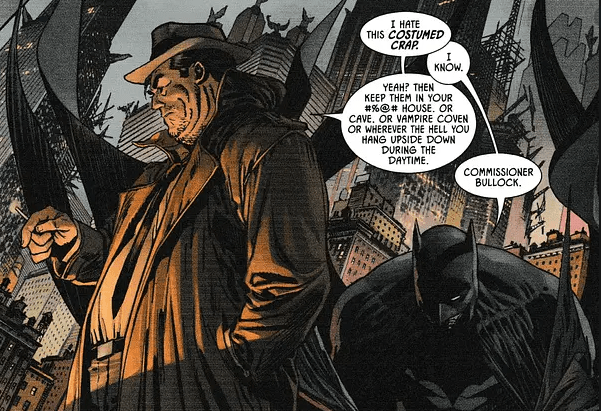 The actual passing of the baton appears to have happened off-panel, somewhere between the revelation that Gordon has been infected by the Batman Who Laughs in Batman/Superman #3 and the first mention of “Commissioner Bullock” in Batman #86. (Though the current massive event storyline Dark Nights: Death Metal is currently unfinished and takes place in this gap.) As Bullock himself said to Batman in #87, “Hell. I’m a seat-warmer. We both know it.”

Gordon has been missing from Batman for months and even disappeared from the entire franchise of books with the exception of the series that stars his daughter, Batgirl. Will Commissioner Bullock last? Or will Commissioner Gordon make a dramatic return in Batman #100? To find out if this time is different, we’ll all have to wait and see.