The January direct market sales numbers are in (thanks to Comichron)! These numbers reflect copies ordered by retailers, not copies actually purchased by consumers — because those figures are not released by Diamond Comics Distributors. So there could be a lot of unsold copies of any of these titles, just gathering dust on comic book store shelves. Looks like DC is the big winner, still dominating with Batman, but Marvel managed to get a few more titles into the top ten this month. Check out the top ten comics for December:

Doomsday Clock and DC’s continuing Metal-event is STILL keeping DC on top as we begin 2018. A fifth shipping week in January helped the month to the smallest drop in Direct Market sales since the previous spring, just under 2%. DC had a strong opening to the year, with dollar sales up 15% over its total from the previous January, aided by the chart-topping Doomsday Clock #3 and Dark Nights Metal #5.

Doomsday Clock, which had led reorders the last two weeks of the month, saw its total drop only slightly from December; less than a thousand copies. Normally, ongoing titles see a drop from December to January — and a much more sizable one between second and third issues. Not so with Doomsday Clock.

A notable success story was Hawkman Found #1, which released the last week of December with 64,600 copies shipped. The book was the top reordered comic three weeks in a row thereafter, moving more than 22,200 more copies in January and nearly cracking the Top 100 again.

Marvel, as expected, was off year-over-year, but only by high-single digits against what was a very unusual month for it: January 2017 was the month that Marvel offered free overships of its entire line, distorting that category of the charts.

A fifth shipping week in January helped reduce the year-to-year drop in Direct Market sales to the smallest dropoff we’ve seen since last spring, just under 2%, according to information released by Diamond Comic Distributors.

A brief explanation of the following data: the first number in parenthesis is the actual ranking on the month’s Top 500 sales charts; next is the first percentage quote which is the drop (or rise) in sales from the previous issue, and the second percentage quote is the movement over six months or six issues (or, if the book has been around for less that that time, since the first issue*).

Raw data for the Top Six Losers at DC for November:

For DC’s superhero fare, Cyborg was the worst performer moving only 8,699 copies. DC must inject new life into this title or it’s going to go away.  I think all of these titles are safe for now, even though I am completely baffled how their doing so poorly compared to the cringeworthy title known as ‘Exit Stage Left The Snagglepuss Chronicles‘ which moved 10,912 this month. That’s better than America Chavez has been doing.

And speaking of Marvel, here are the worst six performers for January: 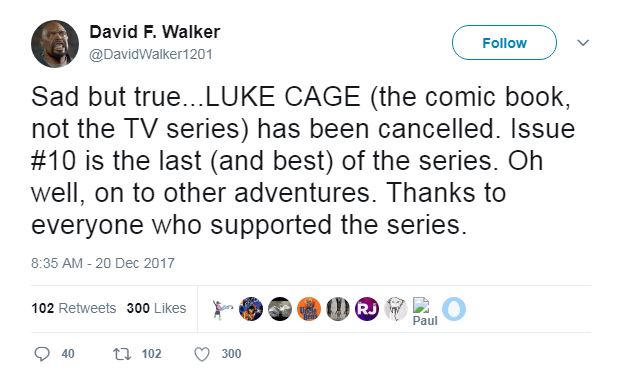 We know Luke Cage was cancelled with issue #170, as is Secret Warriors which ended at issue #12. Monsters Unleashed is is still on death watch, but I have no confirmation on that. Odd that a crossover event has been extended this long. Moon Girl and Devil Dinosaur  has found its audience – and it is small, but that may change with the recently announced animation project. With the just announced “Fresh Start” from Marvel, there will now only be one Avengers book (by Jason Aaron and Ed McGuiness), after years of multiple teams bearing the name, which will unite Black Panther, Thor (the Odinson version), Iron Man, Captain America, She-Hulk, Doctor Strange and Ghost Rider. Odinson will be reinstated as the God of Thunder in his own Thor series, by Jason Aaron and Mike Del Mundo. Black Panther by Ta-Nehisi Coates and Daniel Acuña will pick up on the thread first teased in Marvel Legacy #1 of there being a vast Wakandan Space Empire. Following his death in Civil War (and his bizarre re-appearance in Secret Empire), Bruce Banner will be restored as the Hulk in Al Ewing and Joe Bennett’s The Immortal Hulk. In another out-there announcement, multiplying mutant Jamie Madrox – AKA Multiple Man, AKA future Marvel movie star – is getting his own series as part of the relaunch, too.

On the indie side of floppy sales, Image’s Walking Dead landed at the #5 slot in January with issue #175 selling 82,631 copies sold. What a tremendous title that continues to be!

Thanks to Chuck Melville for the inspiration for this monthly column. Reference numbers provided by Comichron.com. What are your thoughts? Sound off in the comments section below.