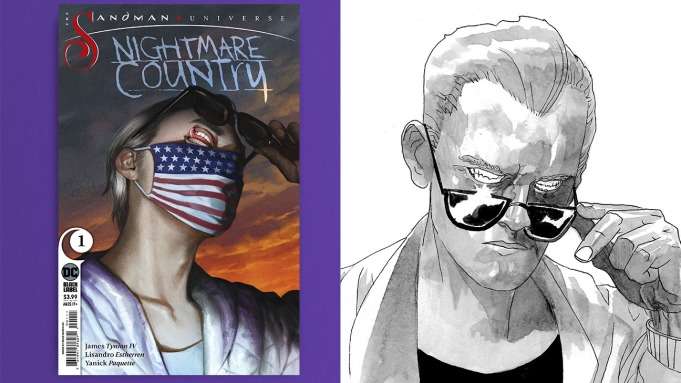 Tynion, one of the biggest authors in comics, who last year announced he was stepping away from DC to focus on creator-owned work, is returning to the publisher for an all-new, ongoing monthly comic set in the company’s Sandman Universe of characters.

The comic, under DC’s Black Label imprint, will not focus on Sandman, the character also known as Morpheus, the Lord of Dreams, nor Death, Lucifer or other gods and demons the seminal fantasy series from Neil Gaiman became known for. Instead, it will focus on the horrifying serial killer known as the Corinthian, a walking nightmare created by Morpheus and a cult fan favorite known for his jagged rows of teeth for eyes.

Titled The Sandman Universe: Nightmare Country, the horror-fantasy series is being written by Tynion and will be drawn by Lisandro Estherren, who previously did art duty on the horror comic Redneck. Each issue will also feature a guest artist who will create a nightmare dream sequence, with the first being drawn by Yanick Paquette. The debut issue is due to be released April 12.

The Sandman was published by DC from 1989 to 1996, lasting 75 issues. The fantasy won 26 Eisners throughout its run, at times outsold Batman books, and broke out beyond the comic shop crowd to become a mainstream bookstore hit via the collected editions, which have continued to be in print ever since. It helped establish the literary career of the comic’s creator, Gaiman, and proved to be influential in many areas, including on a young Tynion, who said that Sandman is the series that made him want to become a comic book writer.

“I spent my teenage years reading and rereading the volumes of The Sandman, trying to absorb all of their secrets,” Tynion told The Hollywood Reporter. “The series taught me that anything and everything was possible in the comic book medium, and set me on the inexorable path of becoming a comic book writer.”

In Nightmare Country, the Corinthian is let loose on the world in order to capture another, more dangerous nightmare, this one not created by the Lord of Dreams. A cat and mouse game ensues, one with a net of nightmares that catches not just dreams, but the people who dream them. It’s a journey that promises to cross terrifying corners of America and include true crime aficionados, white supremacist militia camps, galleries specializing in the art of horror and more. DC describes the comic as a terrifying travelogue through a nation both recognizable and obscene.

The series will also introduce two terrifying new characters to the Sandman Universe: Mr. Agony and Mr. Ecstasy, a deadly duo of killers slipping along after the Corinthian’s quarry, killing anyone in their path, including, if they can, the Corinthian himself. The initial storyline is intended to be a thematic sequel to “The Doll’s House,” the second arc of the original comic and when the books began their breakout ascent.