Welcome back to Indie Comics Showcase. This week’s installment is a bit special. Not only is it a double-sized, special edition, but each of these Indie Comics have something that I feel makes them uniquely outstanding. I hope that after reading the article, you’ll feel the same way.

The first feature in Today’s installment is The Idols of Solansehir: Books 1 & 2 written by Vera Greentea, @LadyGreentea on Twitter, with illustrations by Miyuli. Vera describes the comic as” Moody and Bewitching” I would say those are accurate descriptors. Solansehir originates from the Turkish words Solan which means Fading, and Sehir which means City. So the complete translation is Idols of The Fading City. It is a very pretty title which I feel also summarizes the story. It follows two sisters as they put aside their differences to help their brother, a soldier who just got back from deployment, fight away his demons. 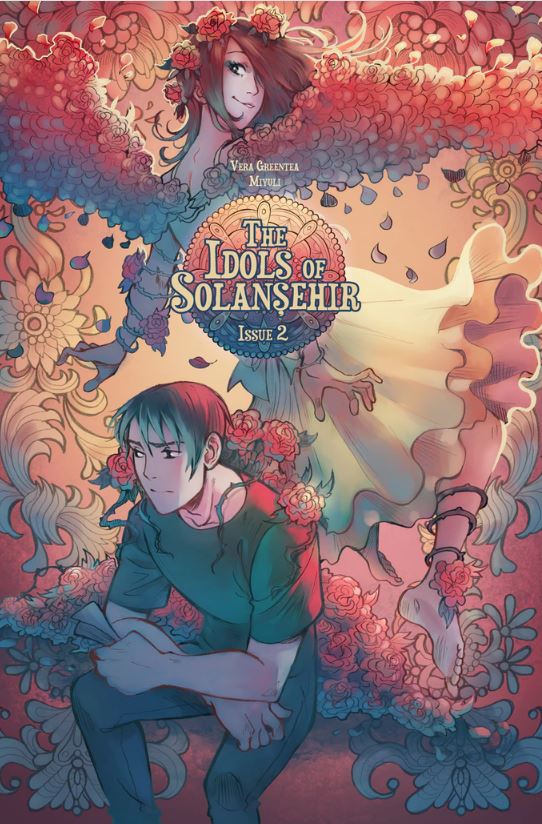 The art and writing of Idols of Solansehir are of the highest quality. I love the color palette that was chosen for the comic. It helps give it a very unique atmosphere, one that makes you feel invited and welcome. Idols of Solansehir  is such an incredibly rewarding read, showcasing emotive and well developed characters who share a strong family dynamic, rich lore and mythology, some of the best world building I have come across in a long while. This project takes inspiration from works like Guillermo Del Toro’s Pan’s Labyrinth and Neil Gaiman’s The Sandman.

The meaning of the title: Solanşehir is inspired by taking two words from Turkish and compounding them into one. “Solan” means “fading” and “şehir” means “city”.Together, the title means The Idols of the Fading City. 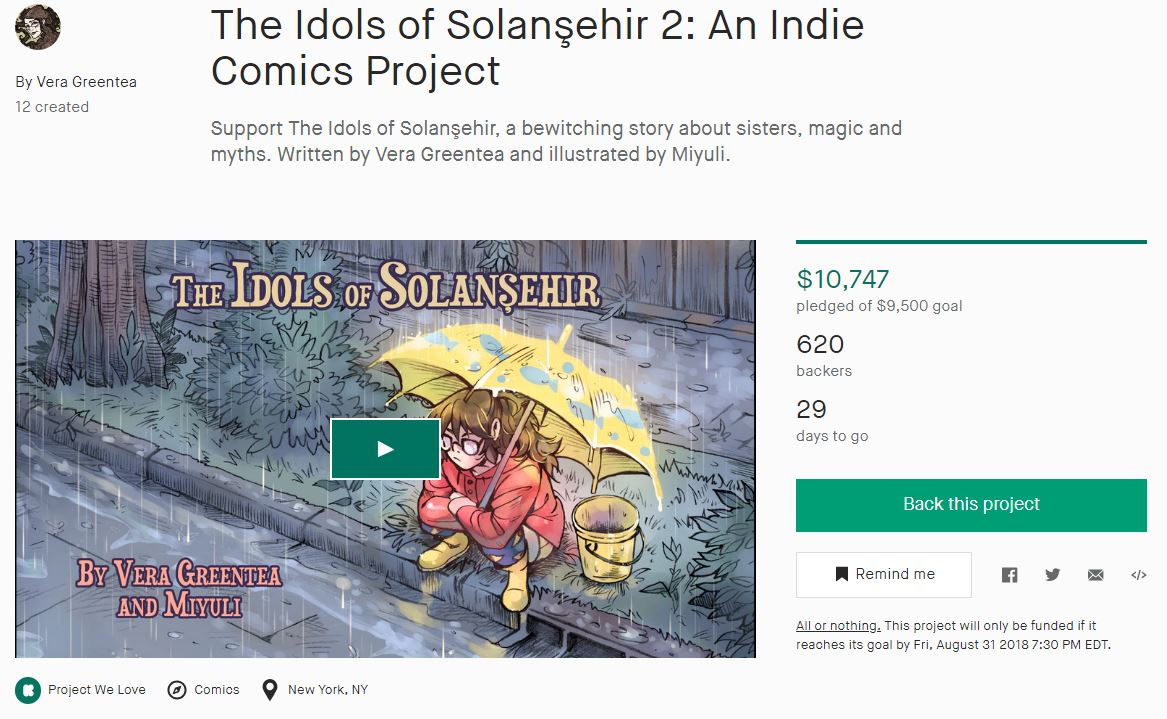 This Kickstarter is for Issue Two, but you may pledge for Issue One as well (just find the corresponding pledge tiers!)! You may also purchase (and receive) Issue One before the end of the Issue Two Kickstarter over here: https://greenteapublishing.com/products/the-idols-of-solansehir-issue-1 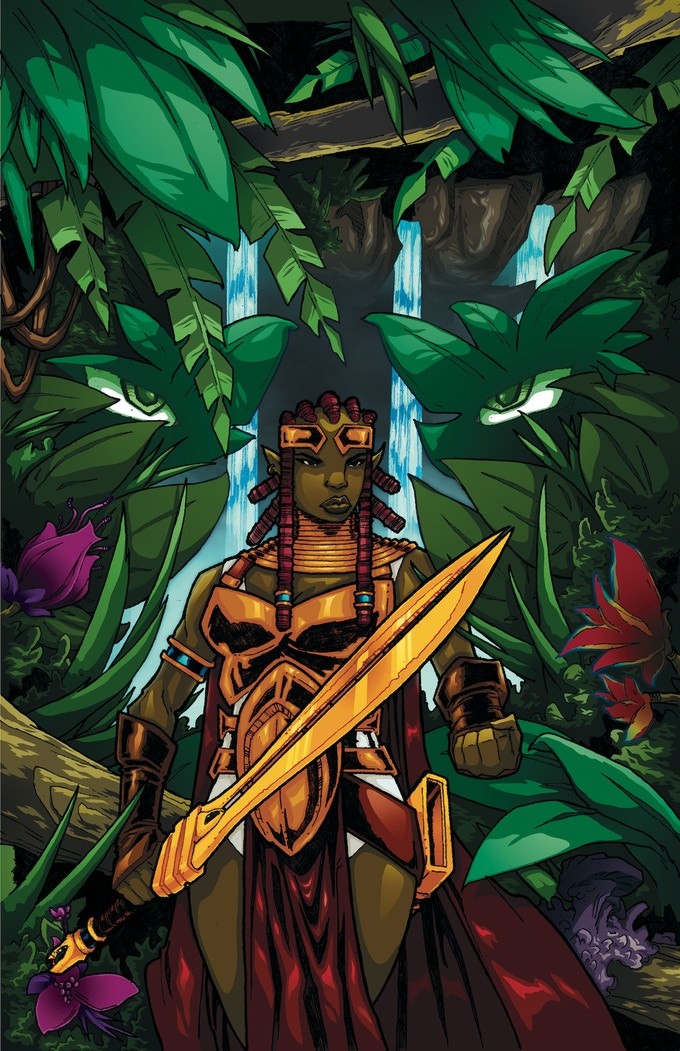 This next Indie Comic is Sword Saga: Dragons Fall by Rodney Anderson Jr. It is an incredibly exciting story of magic, epic battles, and dragons. It follows Tal Granji, a young black warrior from the Vilage Dragao. After awakening from a strange dream Tal sees a rare, white dragon fall from the sky into the giant dragon graveyard on the outskirts of town. This sets events into motion which send our hero on a quest of self-discovery and high adventure to understand the truth of the power held by the jewel embedded within his chest and how it connects him to the dragons themselves. Tal wields his grandfather’s ultimate sword the Mighty Trinidaji, a weapon that can transform into three different blades according to accuracy, speed, and power. With Trinidaji in his hands, he runs headlong into a world of danger and beauty embarking on a journey that will change his life forever. If you want to join r Tal on this incredible adventure, throw on your strongest armor, sharpen you finest sword, but most importantly back the project on Kickstarter today. 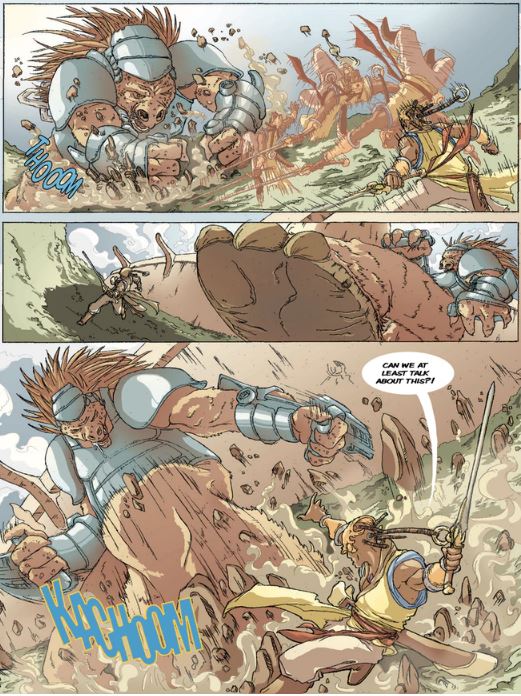 Sword Saga: Dragons Fall has already been fully funded but there are many amazing stretch goals to unlock, but I will let Rodney tell you all about them himself. 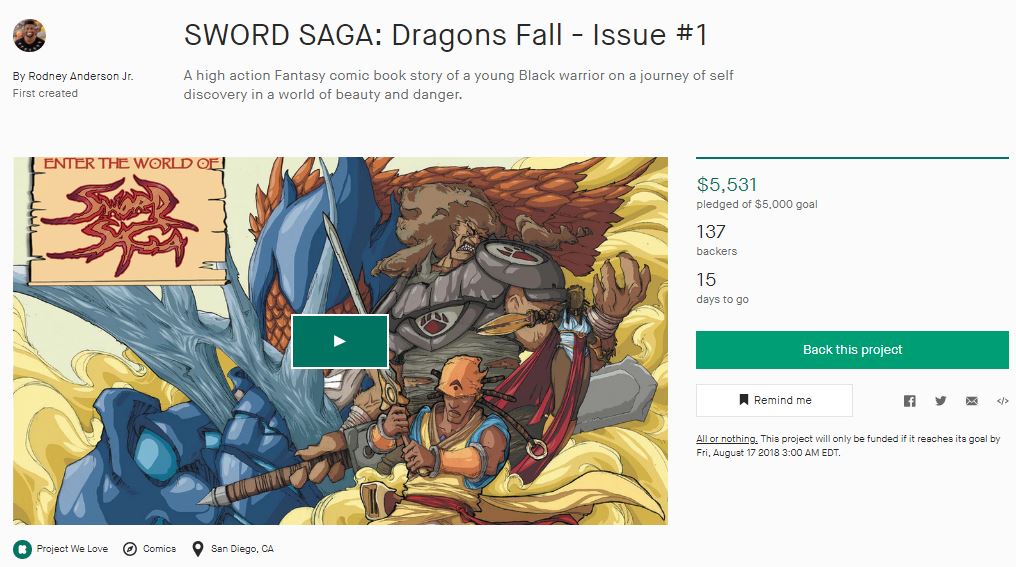 Once again, you can back the campaign here. 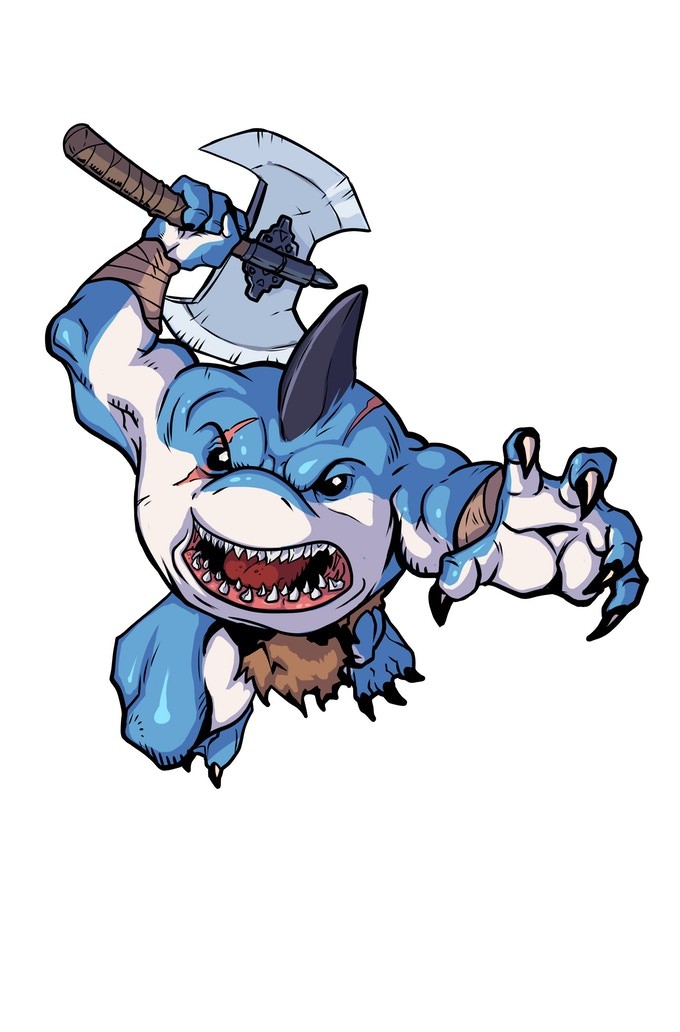 This next Indie Comic Project might just be my favorite of all the ones I have covered on Indie Comics Showcase, so far. BLACKFIN: THE BARBARIAN SHARK by Andy Duggan, @Andy_Duggan on Twitter. I could describe it as being the story of Spartacus, only instead of Spartacus, our hero is a Street Shark that acts like Conan The Barbarian. As awesome as that sounds, I would not be doing it justice. While on the surface it may appear to be just that, but deep beneath the waves, it is so much more.

Before the breaking of the continents and the sinking of Atlantis, there was a warrior unlike any other, This is his tale.

Washed up on a far beach, A baby Man-Shark is found and sold into Slavery and trained to be a gladiator and….wait, wait, wait, This is all the fun part. So, I can’t tell you what happens, but how about some highlights? 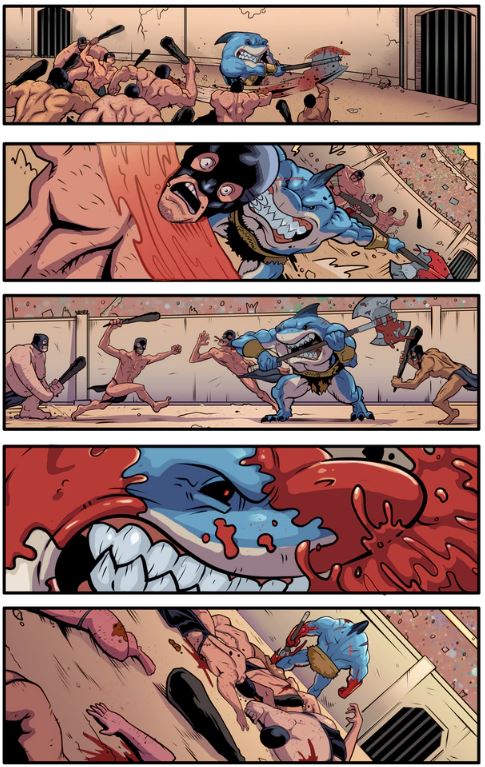 BLACKFIN: THE BARBARIAN SHARK is such a crazy mix of things I loved as a kid, I can’t help be feel nostalgic. The concept and story are crazy fun. The character design and art also hit all of the right notes for me. If you are curious and courageous enough to jump into Shark-Man infested waters, then you can do so by backing the project on kick starter today. 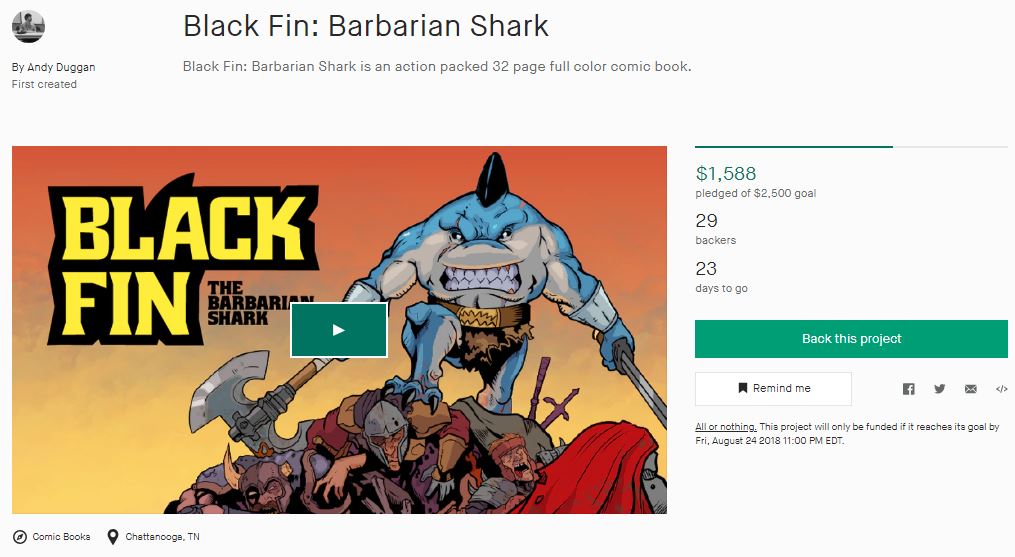 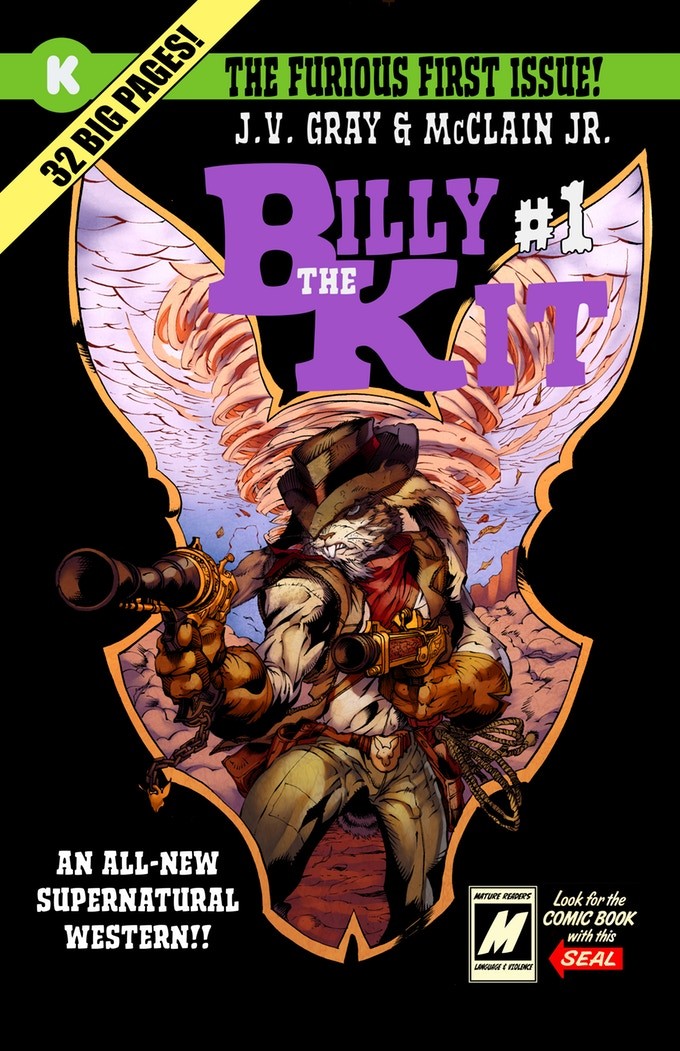 This next comic is one that caught me by surprise and kept me ensnared. Billy The Kit: A Supernatural Western Comic Book written by Justin Gray with art by Barry McClain Jr. and colors by Slamet Mujiono. Billy The Kit is the story of a, kung-fu fighting, cowboy bunny. His entire family is murdered by an angry tornado god named Chulyen, and he has to use his skills to seek revenge. 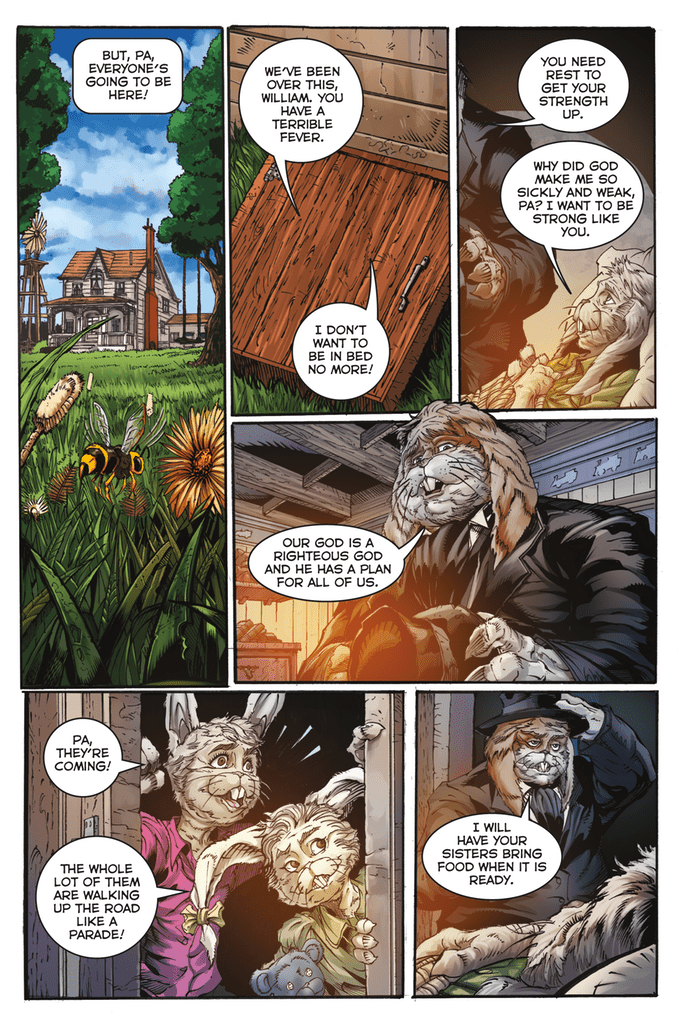 Yes Billy The Kit is indeed off the ***’ing wall and I love it. As soon as I saw the cover art for this book, I was hooked. The art is incredibly rich in detail and surprisingly bright colors for a western style comic. Well pardners, I highly recommend that grab your most trusted steed, saddle up, and head toward the sunset with Billy and his Kickstarter campaign. Wee Doggie, It’s going to be one fluffin’ good time.

Faith, firearms, and kung-fu? I’m in. 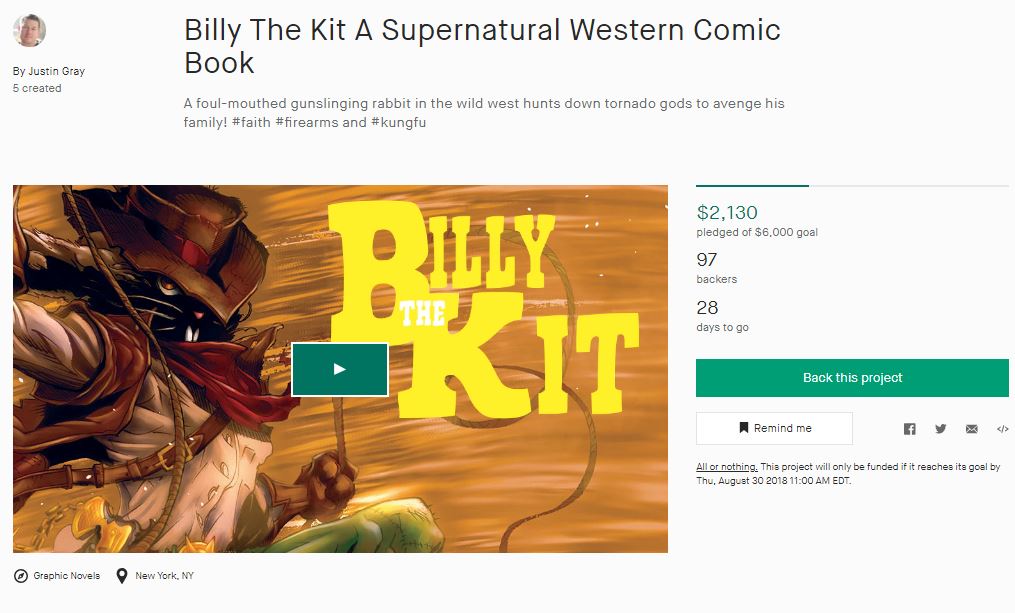 The next Project is from Australian artist Luke Lambert and it is called Weapons Free: Echos of Tyranny With this Indie Comic Luke is trying to recapture the glory of Silver Age Image Comics. It pays homage to the works of creators like Rob Liefeld, Todd McFarlane and many more. I personally think Luke is doing a great job in doing so. The art and story for Weapons Free is just absolutely insane and feel just like a comic that would have come out in the period. There is no PC Culture BS, just lots of action and a ton passion for a bygone era in comics. And I think that is something we can all get behind. To find out more check out the campaign and if it is something you can support, please do so here.

The final entry in in this week’s double-sized issue of Indie Comics Showcase is from our community’s own #1 Amazon Best Selling Author, and friend, Jon Del Arroz. Jon is also an Amazon Bestselling author, “the leading Hispanic voice in science fiction,” according to PJ Media.com, and winner of the 2018 CLFA Book Of The Year Award. He is best known for his steampunk novel, For Steam And Country. The artist is Jethro Morales who has worked for Image and Dynamite, most notably for Hack/SLASH, Green Hornet, and Dejah Thoris. 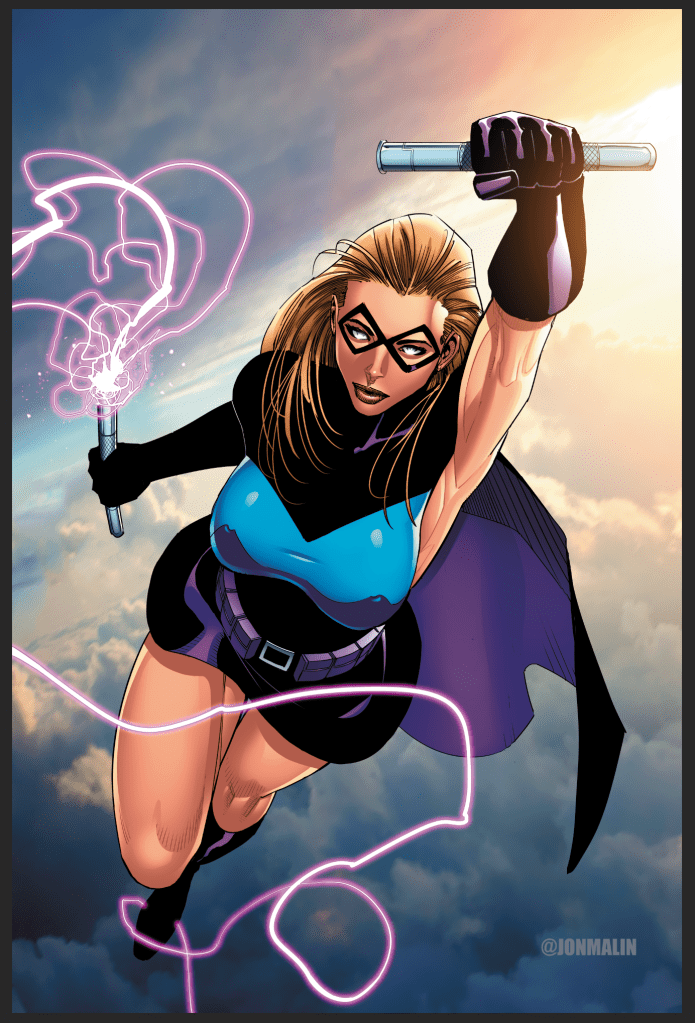 Del Arroz and Morales have teamed up to produce a superhero comic with intense personal drama like the Batman/Catwoman relationship has promised but never delivered. FLYING SPARKS: a hero and villain in love. You can help make this book a reality, with this volume including the first three chapters of this planned ongoing series, 66-pages of storytelling by a professional science fiction writer. The best part is: the art is already complete, which means this book can get into your hands much more quickly than most crowdfunded comics! 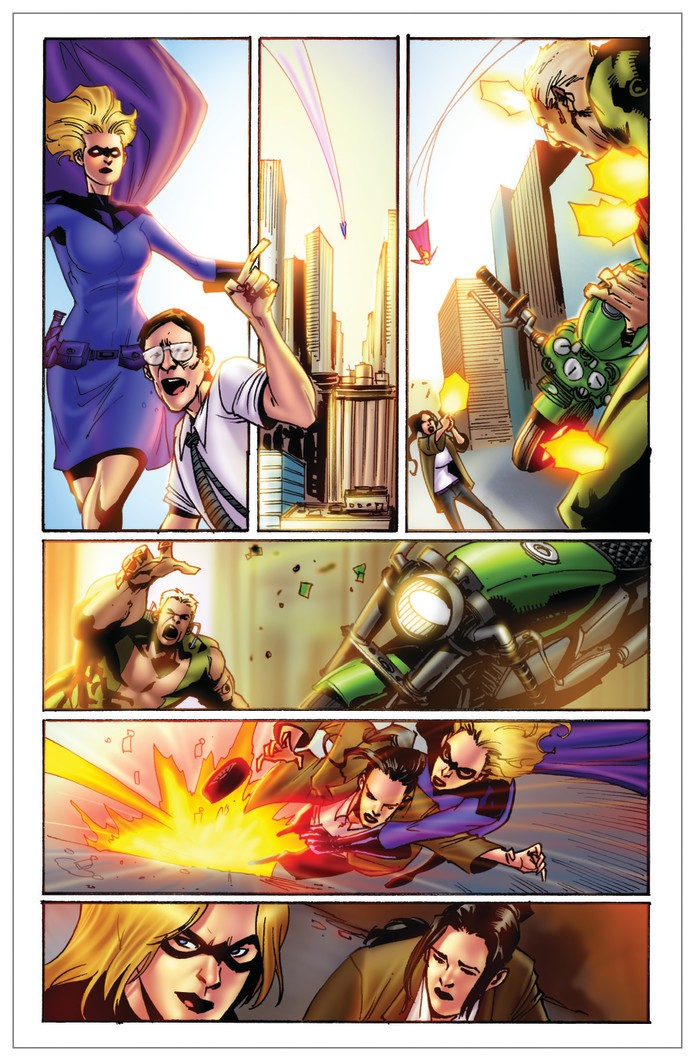 Del Arroz’s  work has been as successful as it has gone ignored by the major mainstream media outlets. Why that is you may ask. It’s because he is an outspoken, MAGA hat-wearing President Trump supporter. Flying Sparks is his first ever Indiegogo Project and it is amazing! FLYING SPARKS is an epic superhero story with intense relationship drama, with lots of action and beautiful art. If you want to help make Sparks Fly, back the project here. 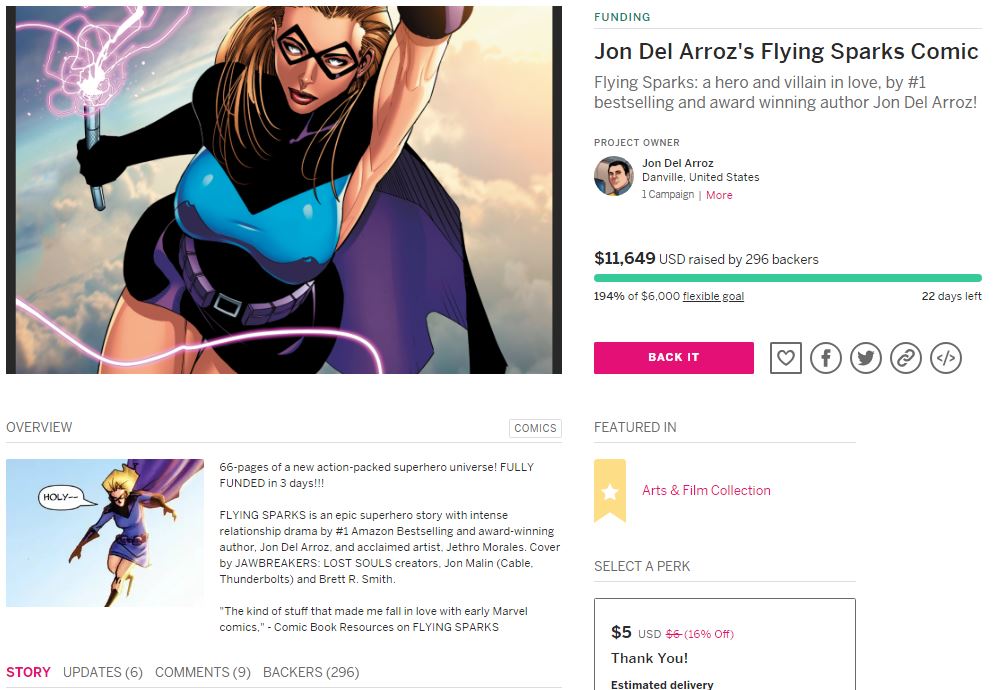 _______________
I hope you have enjoyed this week’s double-sized issue and that you will return for next week’s Indie Comics Showcase!