Welcome back to another installment of Indie Comics Showcase! As per usual I’m going to showcase at least three comic books that are currently being crowd funded. Since there are so many and I do not want to the article to appear overcrowded. I will be uploading a bonus one later on in the week. Just like last week’s bonus each comic will share a common theme!

The first comic I’d like to Showcase today is called Sugar Glider. This comic is by the father and daughter team of Jason and Shelbi Webb.  Shelbi is a twelve year old girl who created her very own original super hero called Sugar Glider as a way to cope with depression caused by bullying and a friends suicide. Sugar Glider is a character that is supposed to help people in the same way she did Shelbi. 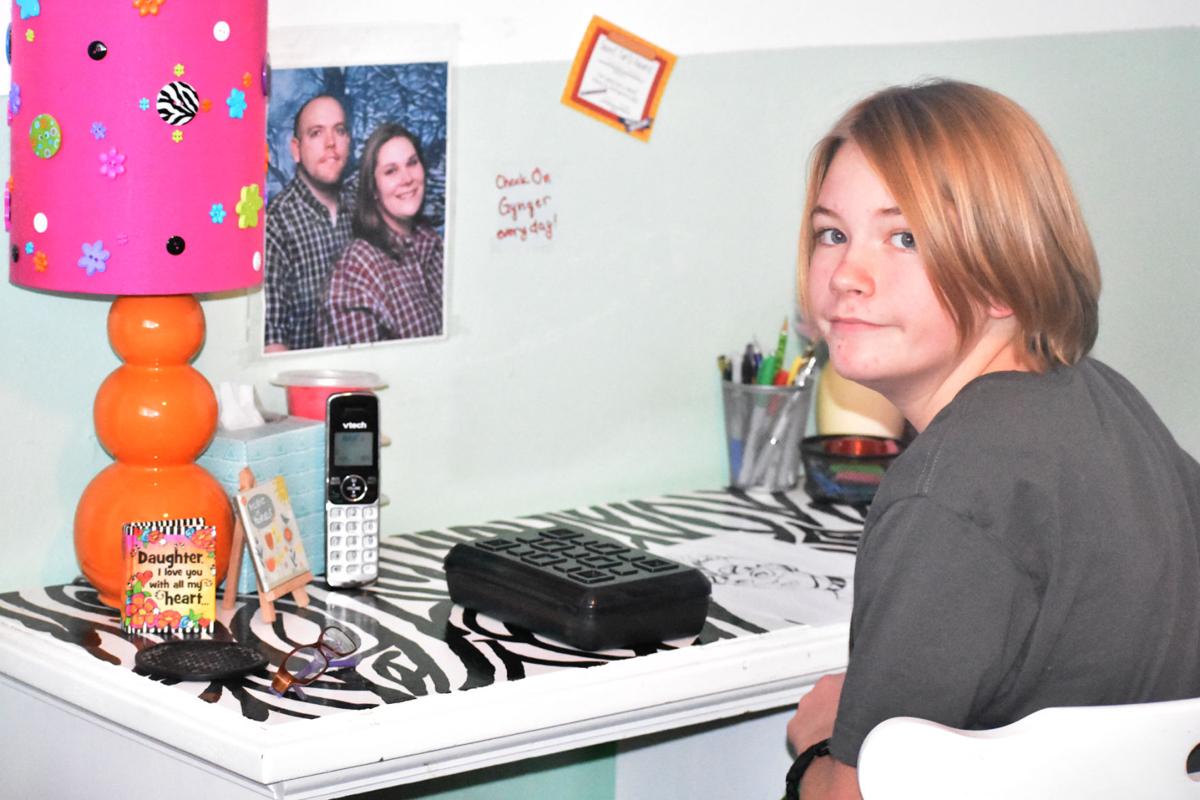 Sugar Glider is a Track and Field Star and adrenaline junkie, from a Southern California beach community. Apparently a meteor shower took place while Jordyn, aka Sugar Glider, was camping in the mountains. When she went to investigate the crash site, the ground around her collapsed and she came into direct contact with the meteor and collapsed.

After a rescue team recovered her,  Jordyn awoke in the hospital with no major injuries. That is when things really started to get strange for her. She had gained super speed, agility, and healing. She knew she had to do something with the powers she had been granted. Knowing she could not do it alone, she went to the person she confided in most, her best friend Edgar. Edgar helps her convert her Wing Suit into her new Super Hero Costume. One of the modifications to the suit was the inclusion of a pair of compact wings, which  would allow her to convert her momentum into gliding thrust to fly. Jordyn eventually learns that other kids from her school were also affected in various ways by the meteor shower. 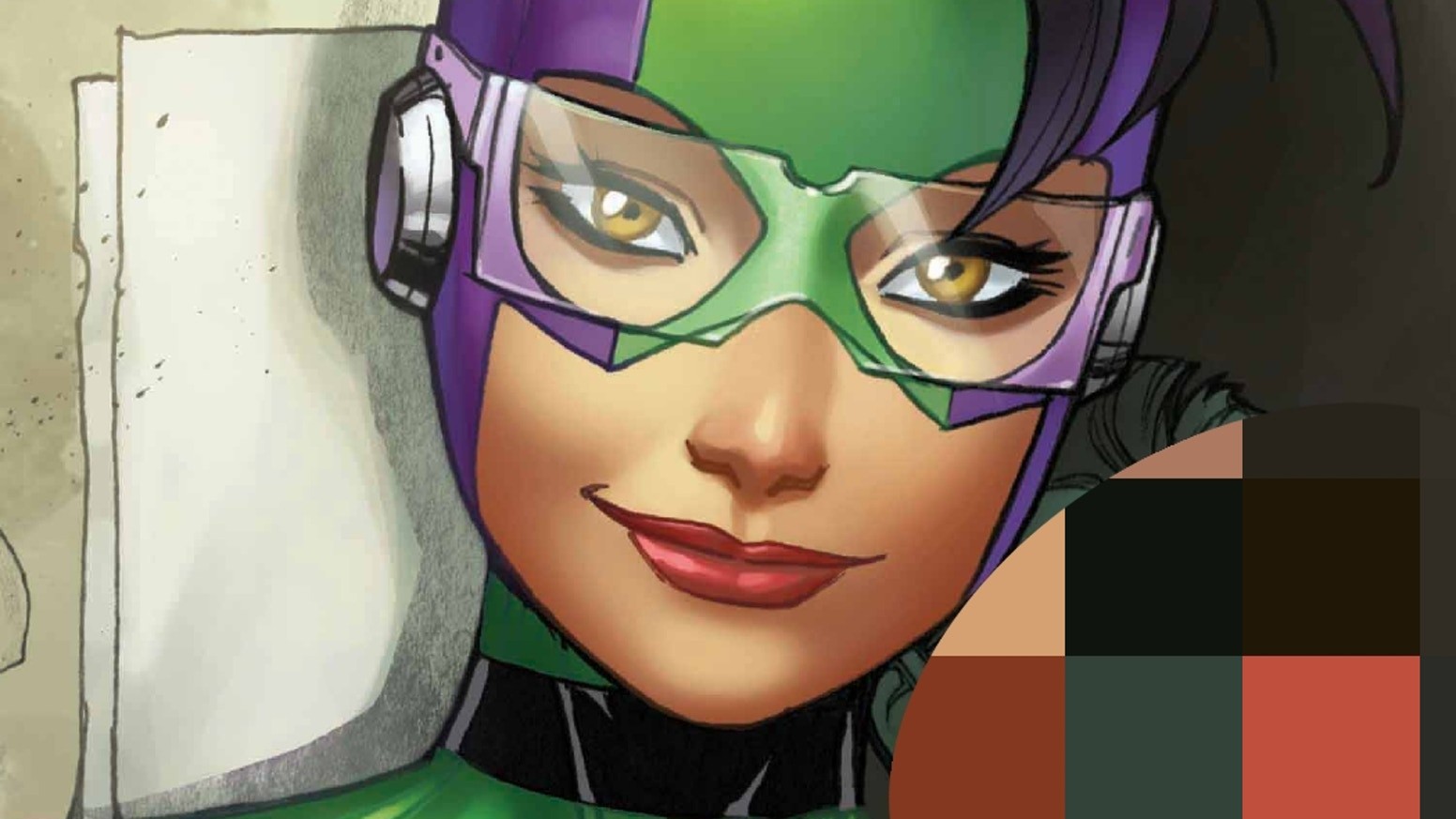 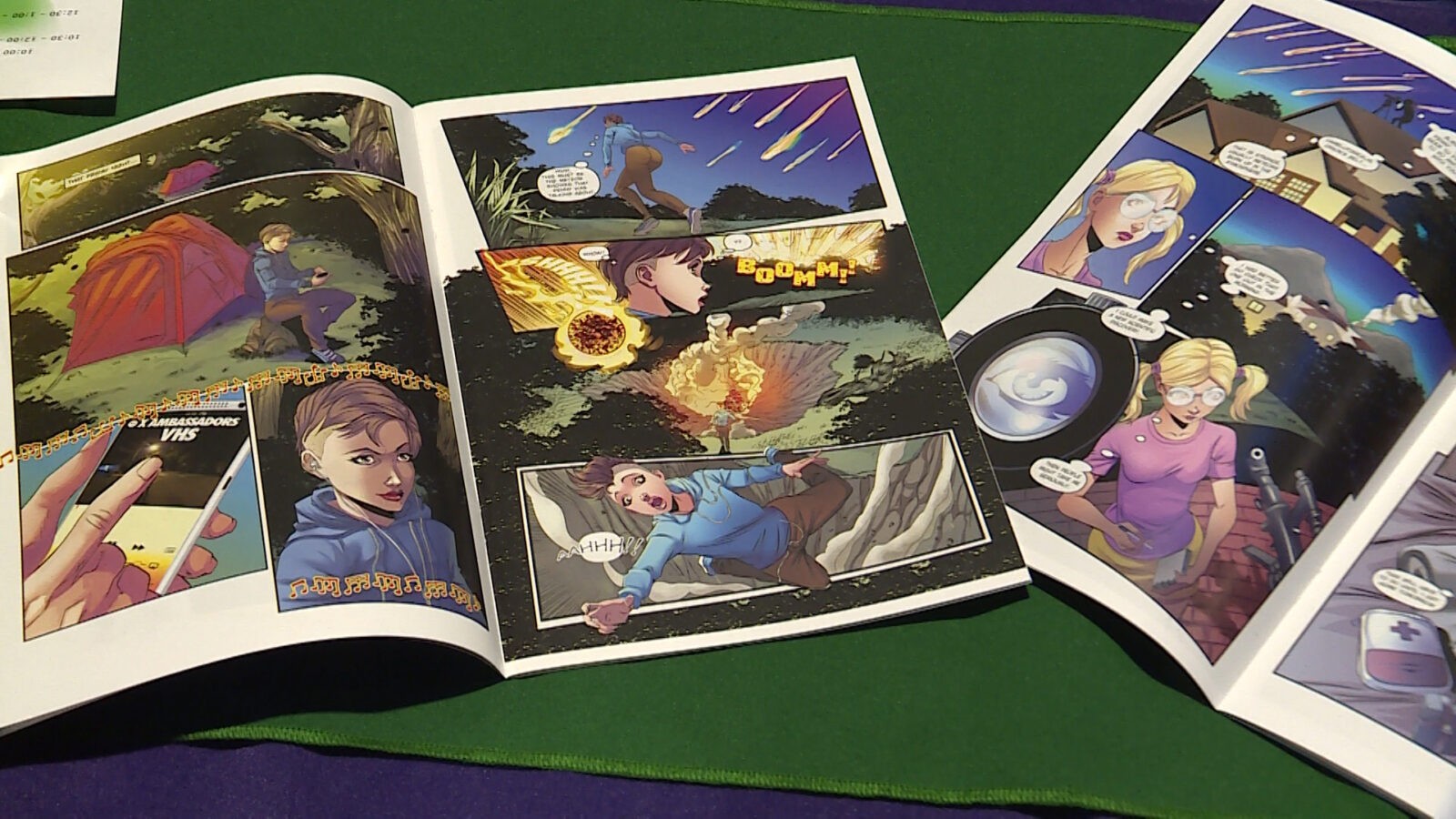 Antagonists in the comic will be personifications of challenges facing teens today. Challenges such as self-image, bullying, suicide, mental illness, peer pressure and many others. Sugar Glider has a very 90’s Image aesthetic similar to that of Gen13, which I really like. The story is surprisingly well written. The whole project is just really cool. This campaign is for Issue #2 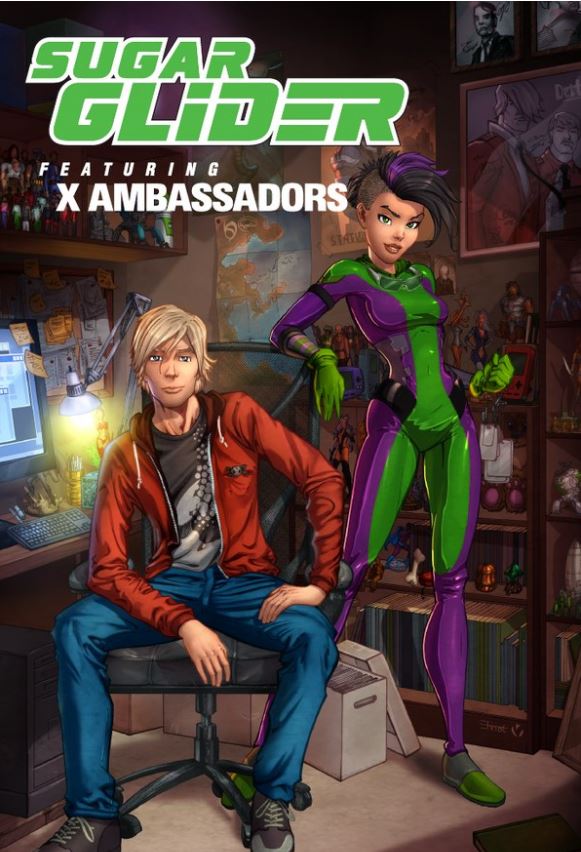 This next comic is one that I hope one day gets turned into a B-Movie and is aired either on Netflix or SYFY. Something along the lines of ‘Two Headed Shark Attack’ or ‘Sharknado’. They may not be the best movies, but I love them. So, from creator Bob Frantz I present you Metalshark Bro!

No, he is not a shark made of metal. Metalshark Bro! is the story of a Demon named Beelzebra, yes that is correct BellzeBRA, who one day meets a Shark, and just for the Hell of it, decides to turn the shark into a Shark Man. One who just happens to develop, not just a taste for Demon Flesh, but for METAL! 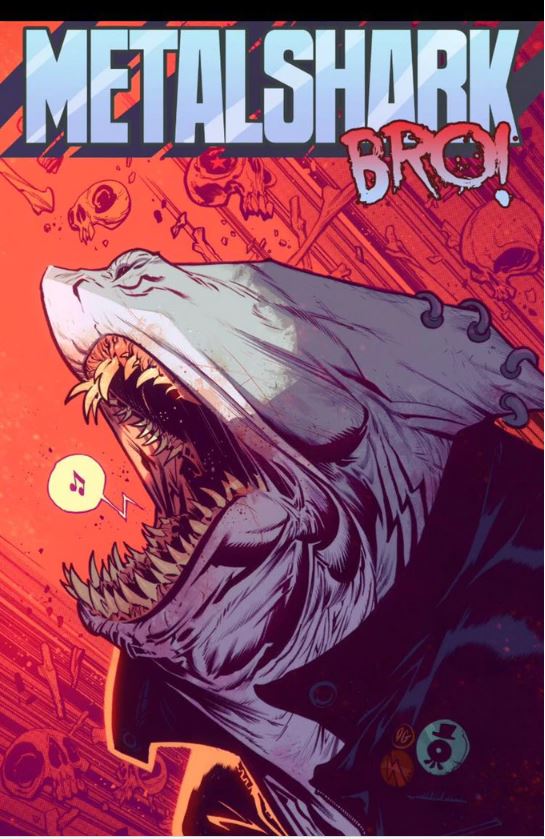 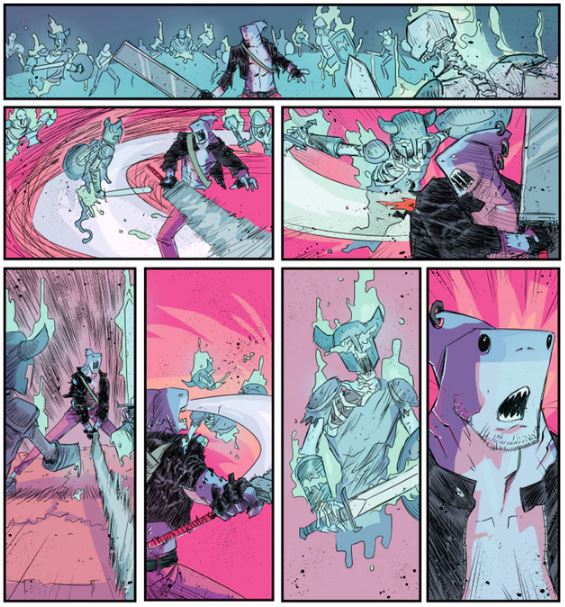 Now, in order for Beelzebra to return The Shark Man back into a Shark, The Shark Man has to complete a series of tasks and collect some souls for Beelzebra. This project is just crazy and I love it. I mean, Bob Frantz and the rest of the team are really going all out on this one. Their Campaign Goal is $24,666. HAIL SATAN. It’s half way funded and loaded with really cool perks. So I highly, highly recommended that you take a bite out of MetalsharkBro, Bro! before he takes a bite out of you. Back this project here! 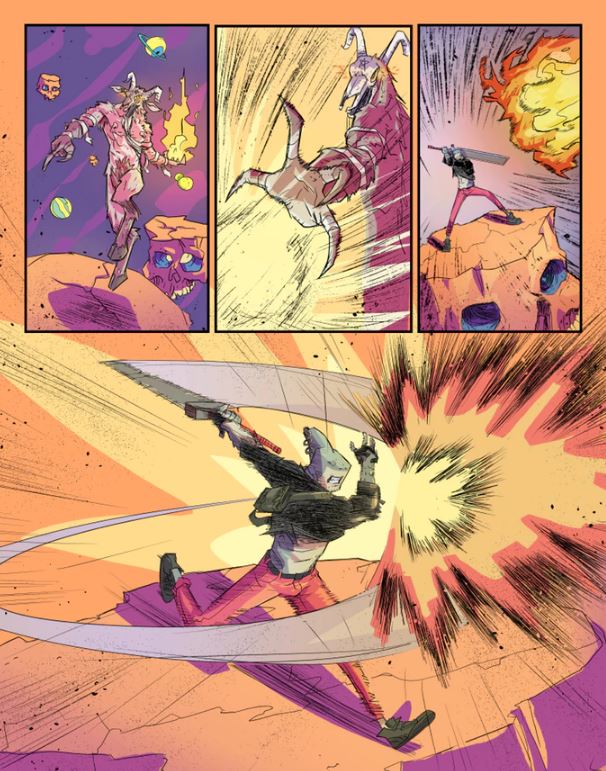 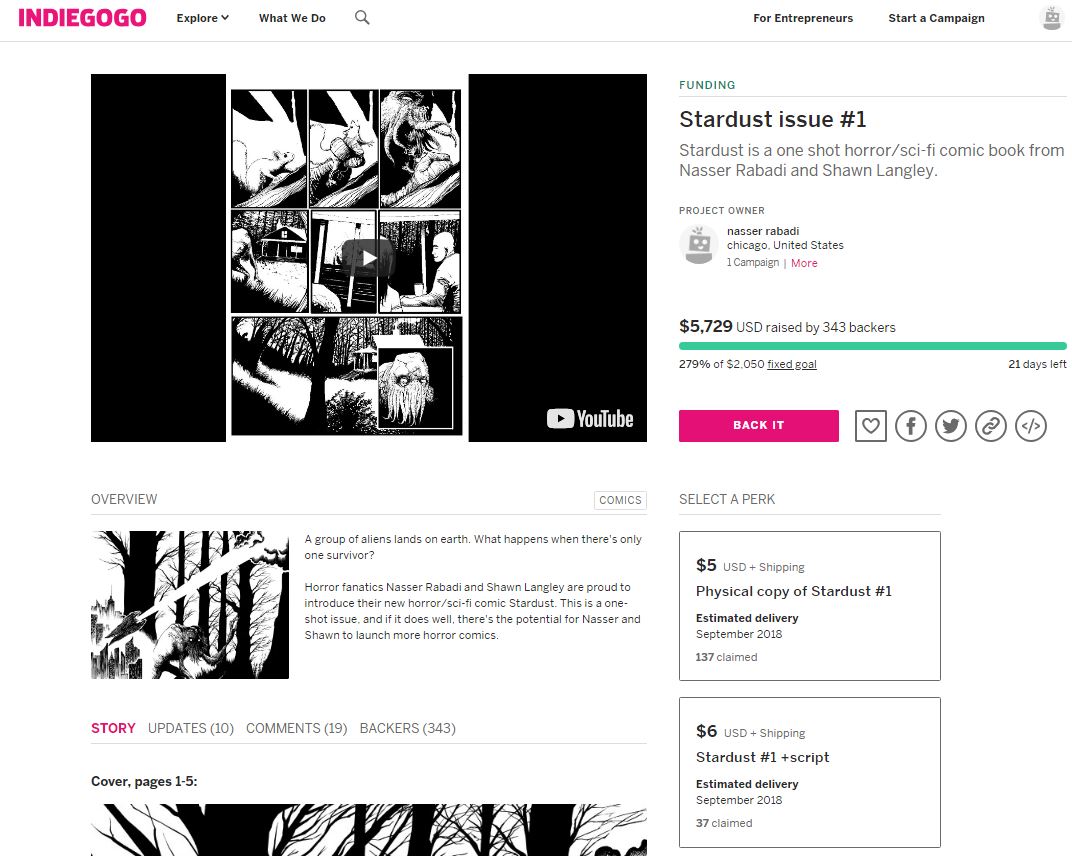 If you are a fan of classic horror sci-fi films like: Invasion of The Body Snatchers, The Day The Earth Stood Still, Plan 9 From Outer Space, and War of The Worlds, then I have the perfect Indie Comic For You. Stardust #1 is a one shot Horror/Sci-fi comic book from Nasser Rabadi and Shawn Langley.

A group of aliens land on Earth, but only one survives. Being that Stardust #1 is still in the very early stages of production, there isn’t a whole lot of information. But what is, leaves an impression. You can see that Nasser and Shawn have dedicated a lot of time and love to this project, and it is really paying off. 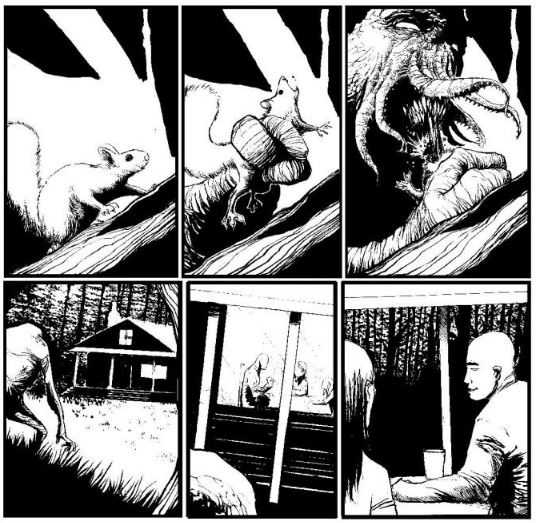 Langley has done art on some of Marvel Comics’ trading cards along with a graphic novel for Source Point Press. The letterer, Nikki Powers, has done work for several indie companies, most notably Alterna Comics. It’s a SUPER LOW barrier to entry, since you get a physical copy of this comic for only contributing $5. The team knows that the price of this book is low for most campaigns, but they are planning to ship cost effectively. The book will be printed from ComixWellSpring, and they give a great, great deal on printing. The campaign has shot past its initial goal and their first stretch goal. Stardust #1 is an indie project that I feel you should not miss. Back it here right now! 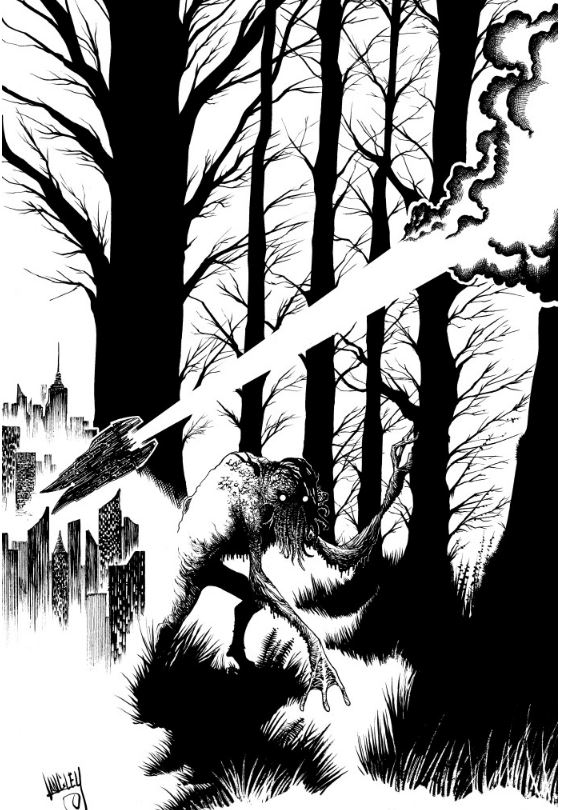 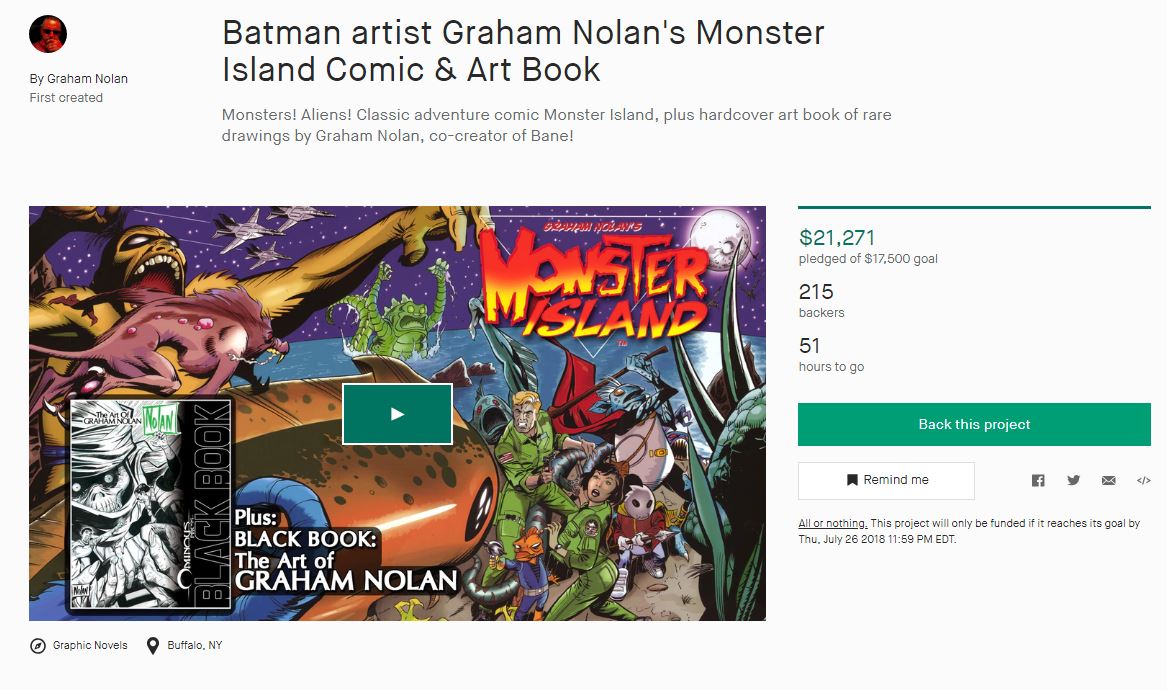 This next Indie Comic is a Bonus Final Countdown addition to tonight’s installment, and it is for Graham Nolan’s Monster Island. This project is a little bigger than the ones I typically like to cover here. Graham Nolan is more well-known artist whose projects I’ve featured on Indie Comics Showcase. It was Graham Nolan, Chuck Dixon, and Doug Moench who brought the Batman villain ‘Bane’ to life. I feel I should also point out that Jamison Ashley actually covered JUNGLE COMICS #1 by Chuck Dixon and Kelsey Shannon in his article Comic Crowdfunding Goes Mainstream.

Graham Nolan’s Monster Island is a love letter to classic Horror Films and the founding fathers of Tokusatsu. It’s premise beautifully captures the feeling of the golden age of Monster Films. This project also sets to launch the monster island franchise for a new generation. Graham has three more books lined up to serve as continuations to Monster Island. This has been Graham’s passion project for years and he has been waiting for the right opportunity to return to Monster Island. I am very happy to see that the time is now. 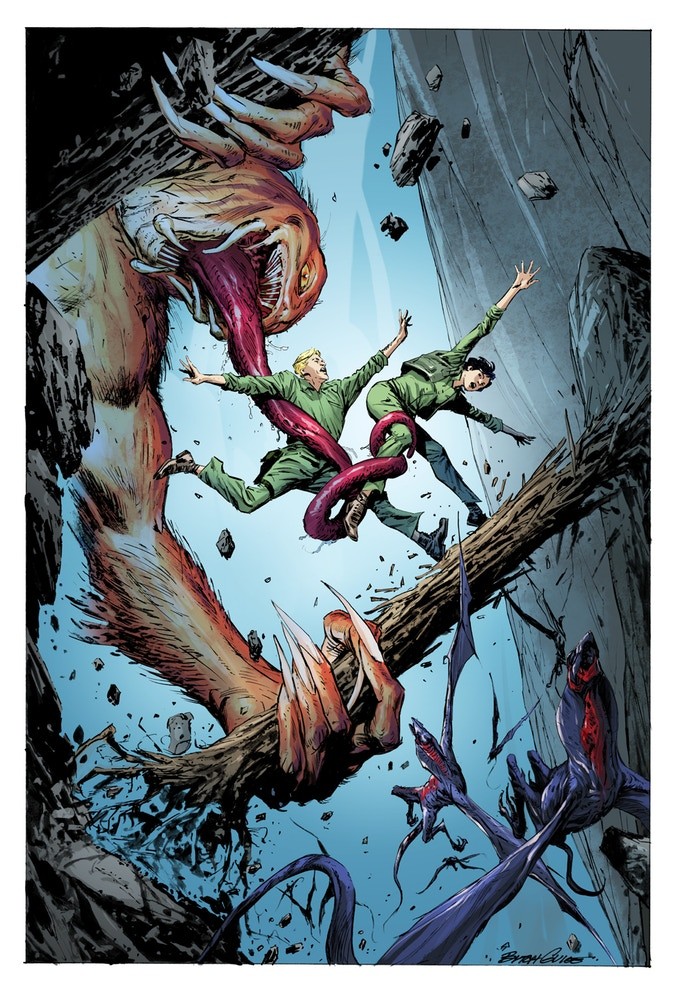 Only 2 days left to back this project, so check it out here!

This weeks GoFundMe feature is for our friend Will Caligan and his company Alpha Dog Studios. Will is a Disabled Vet who also loves Comics. This campaign is to help publish a number of books from his company.

Spike has reviewed a few of them here on on Bleeding Fool. 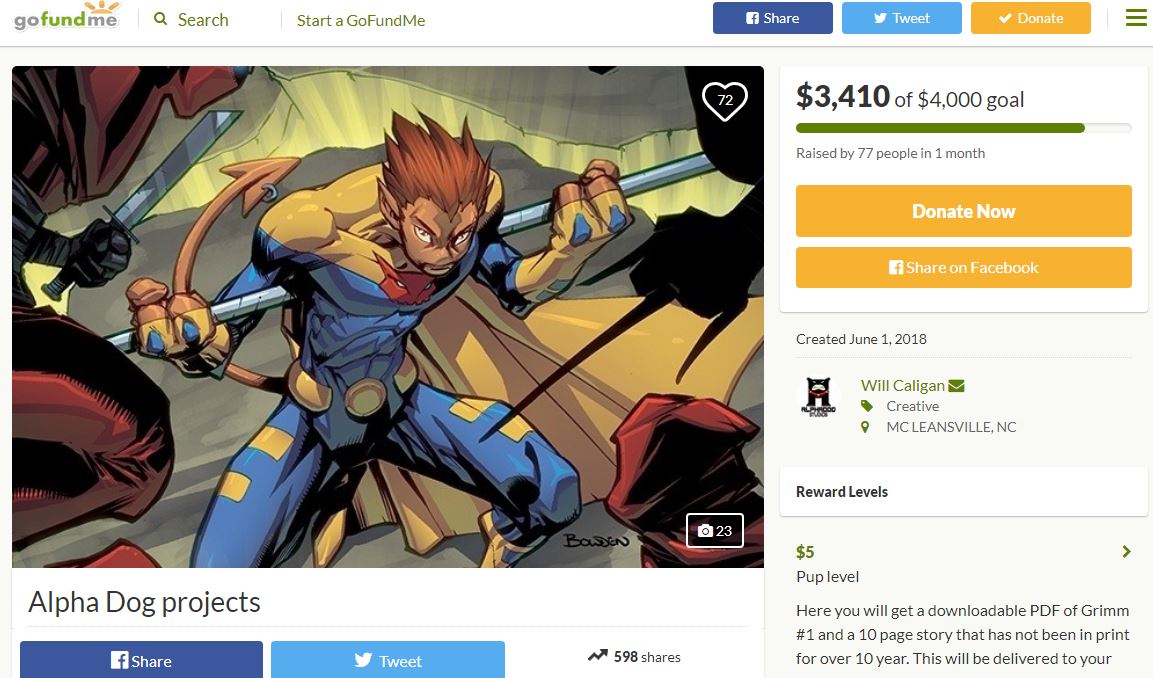 The money will go toward paying off his artists and numerous other things that go into making comics. There are a number of ways to help Will and Alpha Dog Studios all of them you will be able to find below. The studio is very close to reaching their goal, so please consider contributing to get them over the finish line.

Thank you as usual and I hope you will return. I will have another special edition of Indie Comics Showcase as I work on my Surrealism In Comics article. Be looking for that as well.