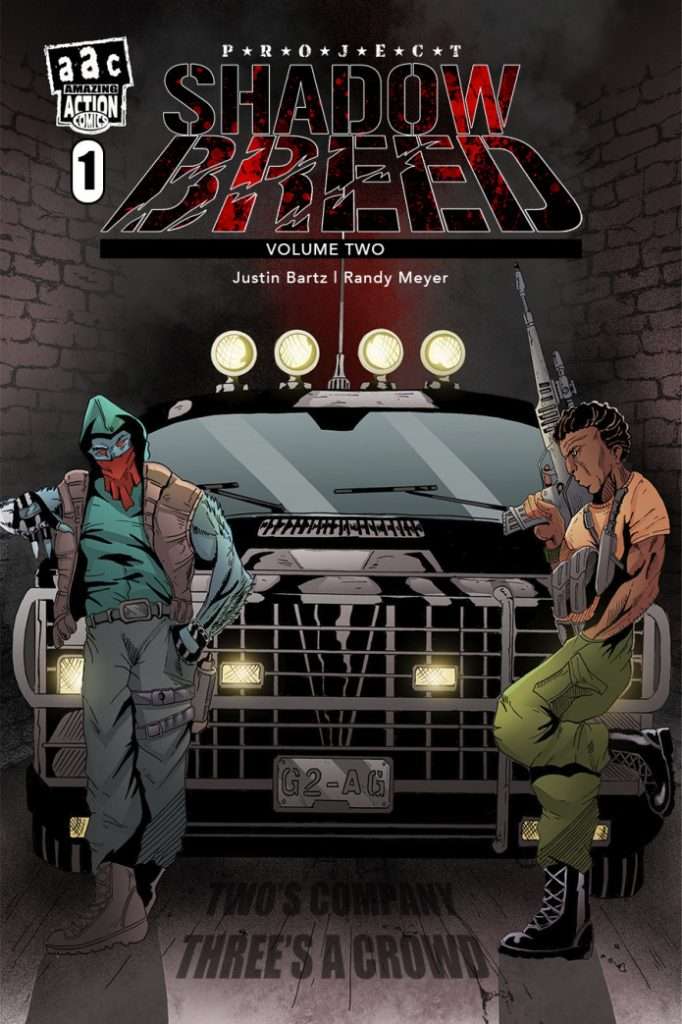 Justin Bartz: It’s a scientific twist to the werewolf mythos, for fans of stories like the X Files, A-Team, and 90s action movies. In the new millennia, SinTech, a private government contract corporation, began developing a serum to turn ordinary soldiers into werewolves. With the backing of the US military, SinTech perfected their serum and in 2014, and they created the first “Wolf Pack” of soldiers. It’s Government conspiracies, CIA Black Ops, and Werewolves! 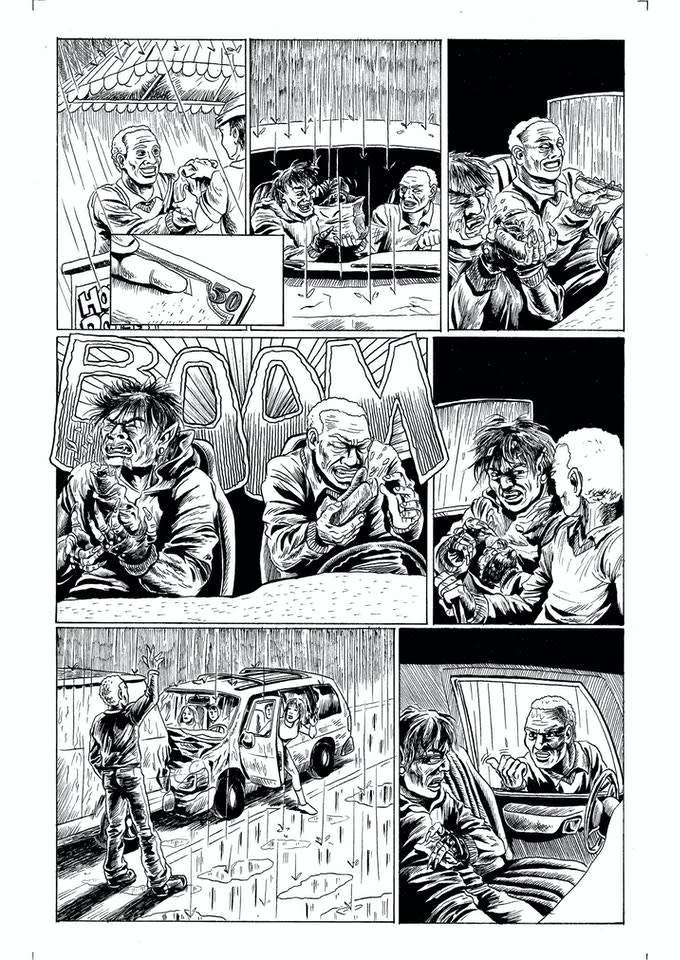 JB: I would play these stories in my head like a movie to pass time while working a boring job. My wife gave me the courage to write them into comics. 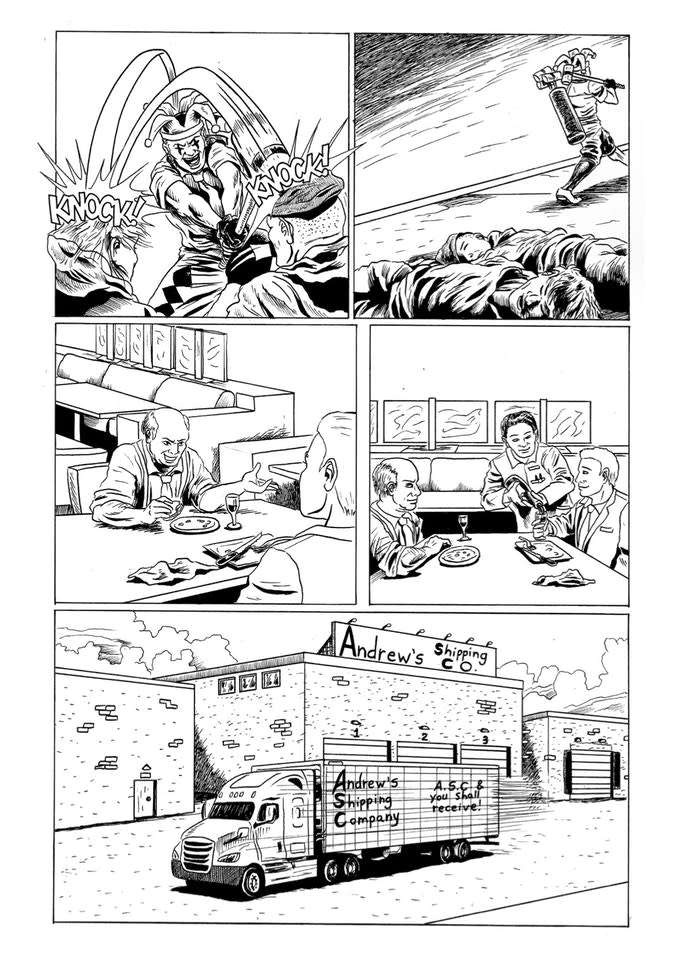 JB: This one is for fans of sci-fi action thrillers, with werewolf soldiers and high tech merc’s, to creepy science experiments and secret government organizations. Project Shadow Breed has it all. 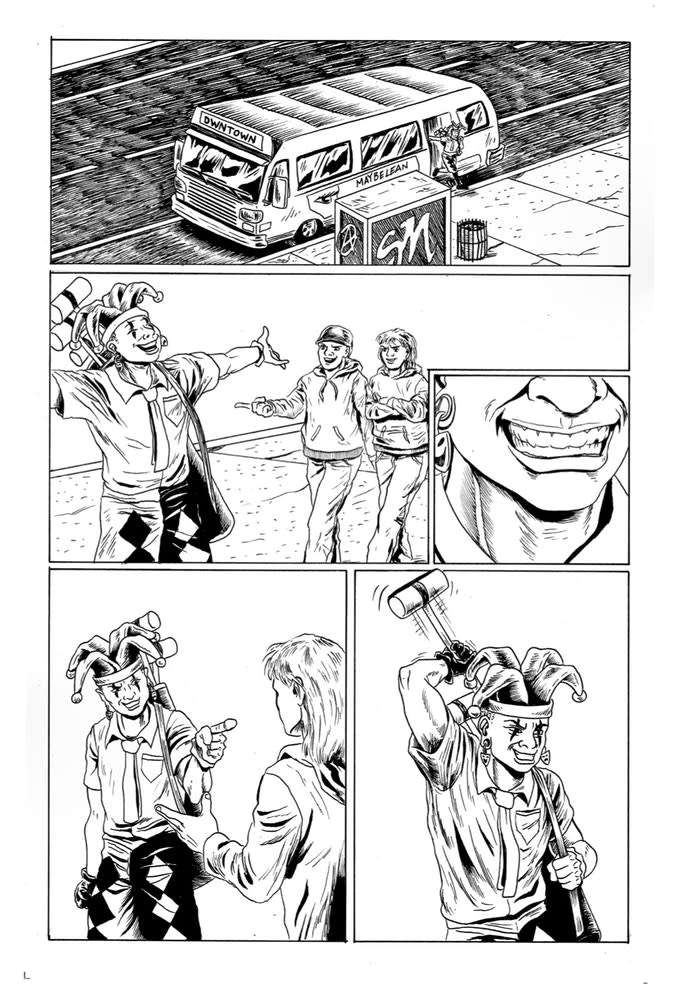 CB: Tell us about your style and creative process, and how you developed them.

JB: I write what I see play in my head, if I don’t like it I can rewind the movie and play it over with a different outcome. Whichever one works best for makes the most sense story line wise is what I go with. If I’m not feeling it I won’t write. Then there are days where I can’t turn it off and I can’t stop writing. 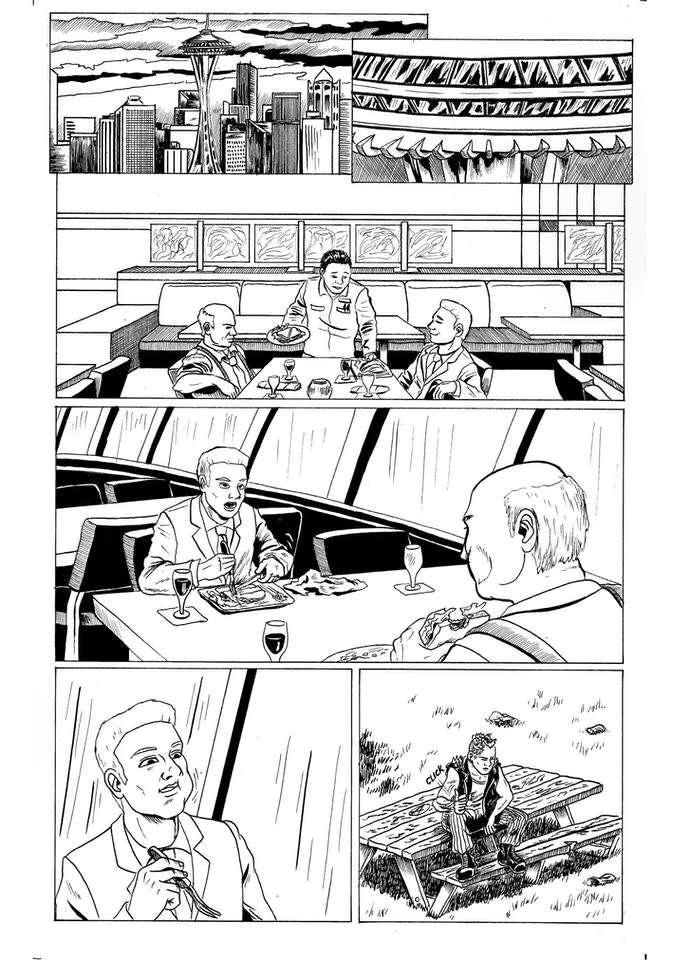 CB: Who’s on the production team?

JB: I’m the writer, the artist is Randy Meyer, and he has a clear plan and some twisted ideas coming down the pipe. I’m excited you all of you to see the his work. Our cover artist is Angel Santiago, and he does fantastic work.

CB: What else do you want to mention about Project: Shadow Breed before we wrap up?

JB: It’s a black and white action packed comic with character driven stories. And the goal of this comic was to get dad’s back into comics and show the new kids how comics use to read. Thank you for your support in advance. It is with the generous support of our AMAZING fans that these projects can come to life.

THE BREWGOODERS ANTHOLOGY
by David Cranna 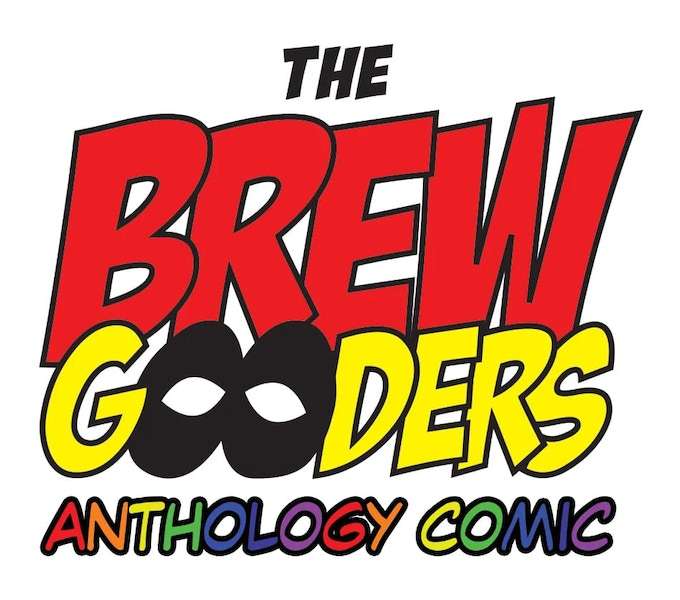 David Cranna: The Brewgooders is a weekly podcast where we drink and discuss craft beer and review the comics they are reading. We also welcome guests from the comic and brewing world to chat. We are now over 140 episodes in and are still going strong. We wanted to do something else to say thanks and celebrate comics. We’ve met with some of our country’s most exciting emerging talents and established characters to bring you this comic anthology. 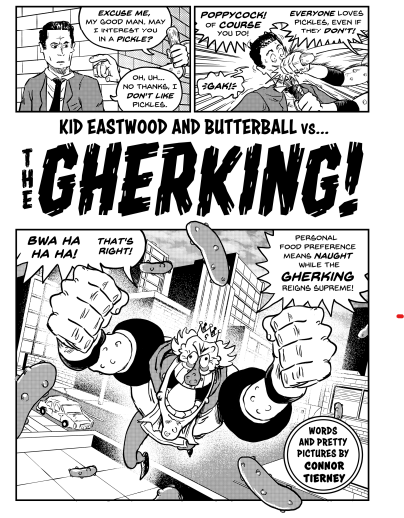 CB: What led to your decision to self-publish and who is it aimed at?

DC: Through the podcast and our love of comics. Chatting it with up and coming comic creators (including luminaries like Kevin Eastman creator of the TMNT and Frank Quietley for Glasgow Comic Con) and chat about the comics we’ve read that week. This assembled anthology is suited for a mature reader, but also long term fans of comics and anyone over the age of 16. We just asked if anyone was up for doing it that had a slight tie to Scotland so we could launch it for Scottish comic book day which Colin Maxwell spearheaded last year 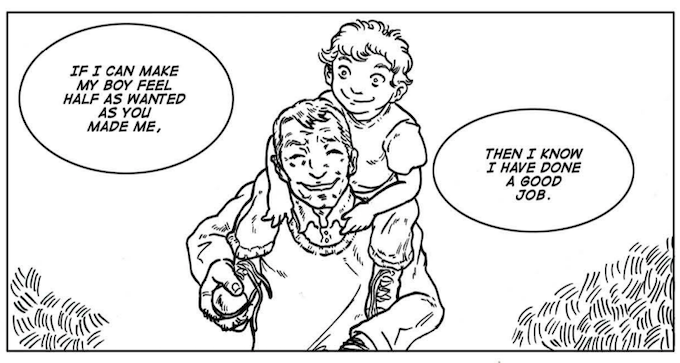 CB: What can you tell me about the creative team that contributed to this project? 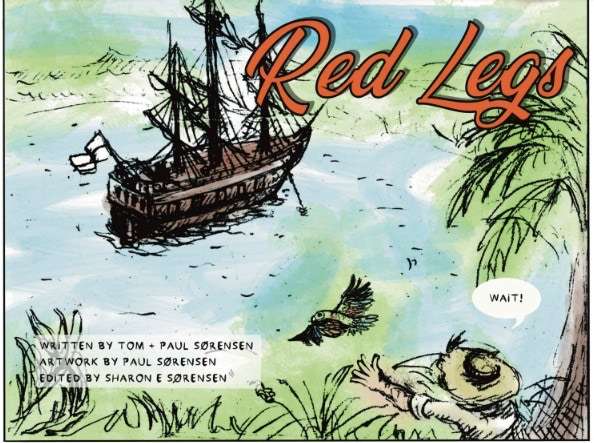 CB: Is the book complete, all ready to go to backers?

CB: What have you been learning from self-publishing / crowdfunding and creating through this process?

DC: We’ve all self-published through Kickstarter at some point or another. I don’t think you can ever not learn from any single campaign. They’re all different and throw up different challenges. With this one, as we have a lot of creators, the wealth of knowledge has been great. We just hope the social media algorithms play ball. 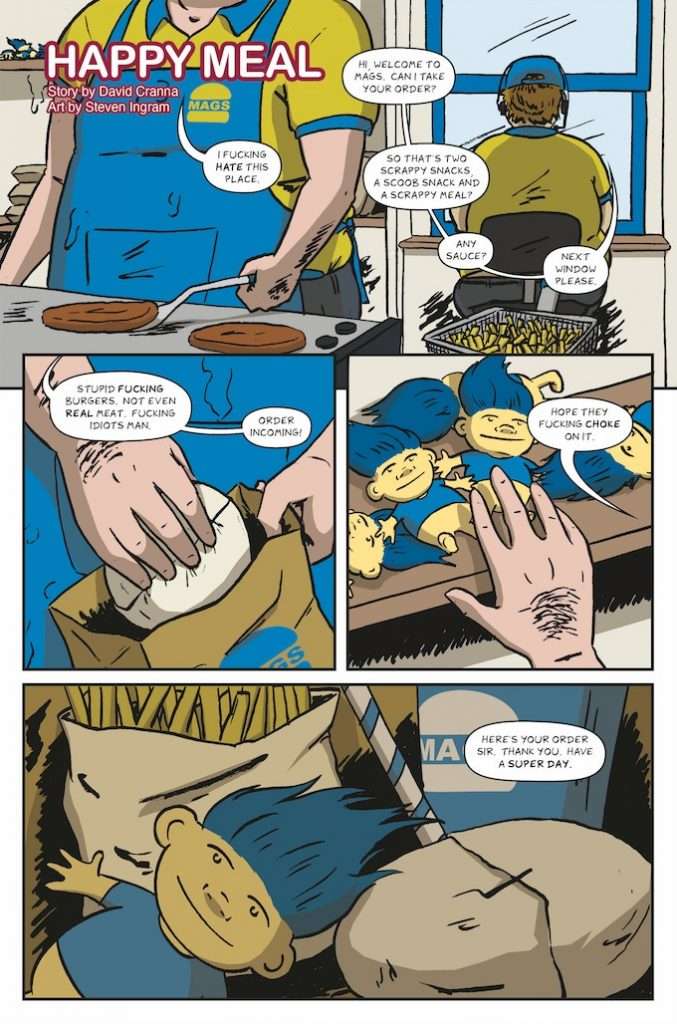 CB: Haha. What are your plans beyond this book? Any more anthologies planned?

DC: Individually we all have lots more stories to tell. As far as the Brewgooders anthology goes, we’ll see how this one pans out and then chat about the next one, probably over beers. We should have lots of our own digital books available if we reach our stretch goals 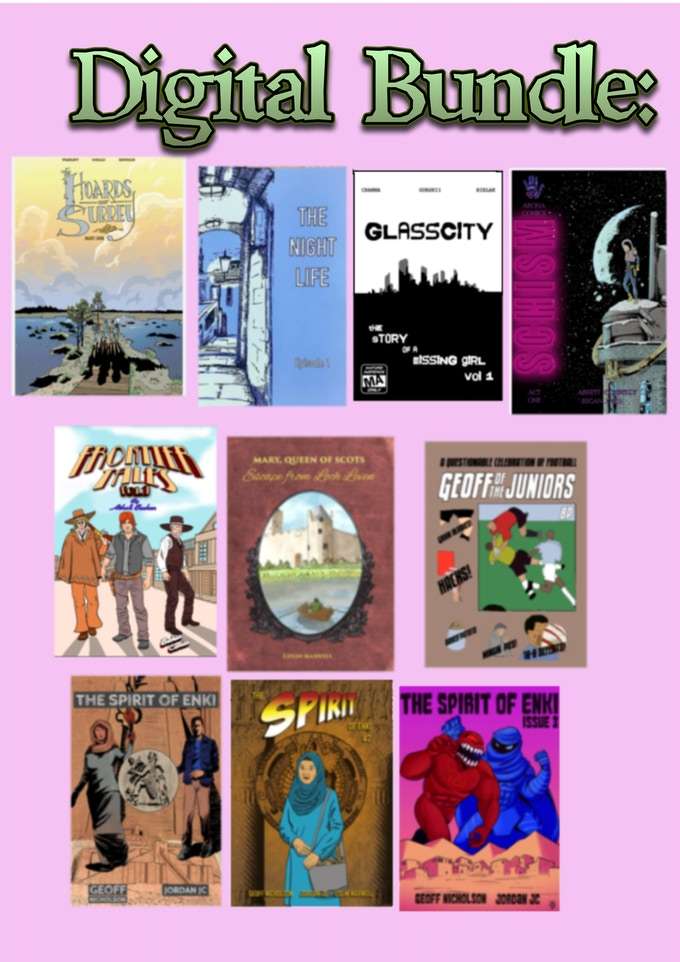 DC: If you’re into indie creator’s or are looking to explore the indie scene, this is a great book to dive into.

CB: Check out the Brewgooders podcast here or here. 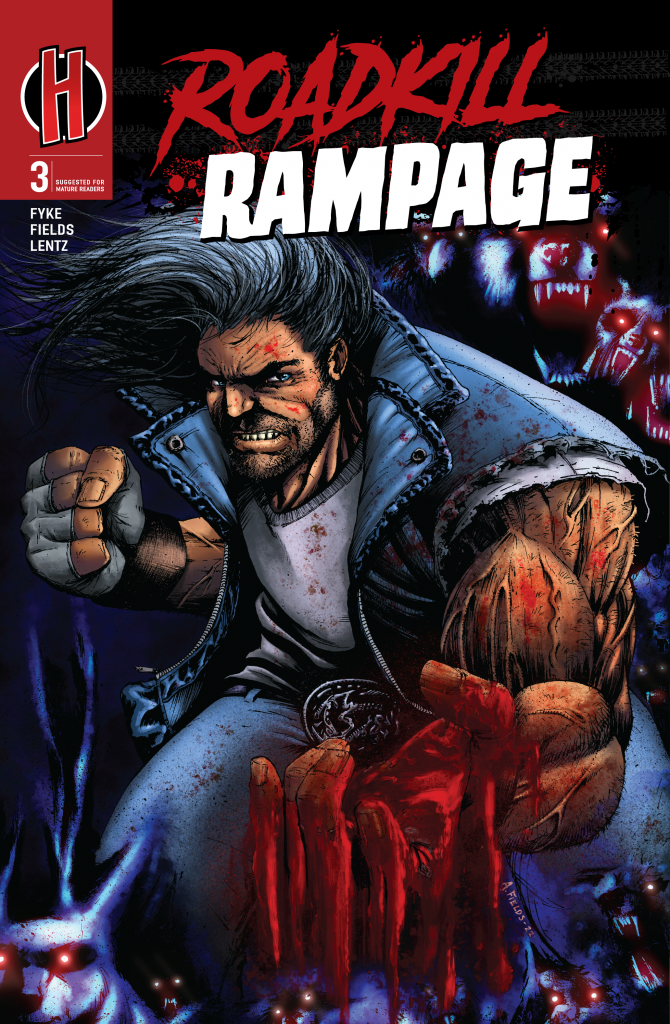 Chris Braly: Welcome to this week’s Indie Comics Showcase, Rodney. Hit me with the elevator pitch for Roadkill Rampage!

Rodney Fyke: Roadkill Rampage is a mature, horror tale following the journey of Tess, our protagonist, after a series of horrific events. Tess awakens in this issue to find herself in a cabin where a group of people is being held in cages, but with no recollection of how she got there. She soon finds out that the big guy she keeps encountering has something to do with all the strange happenings in the forest and that this hasn’t been just a simple case of revenge. Roadkill Rampage is a 24-page black and white comic with the look of a classic horror or grindhouse book or movie. 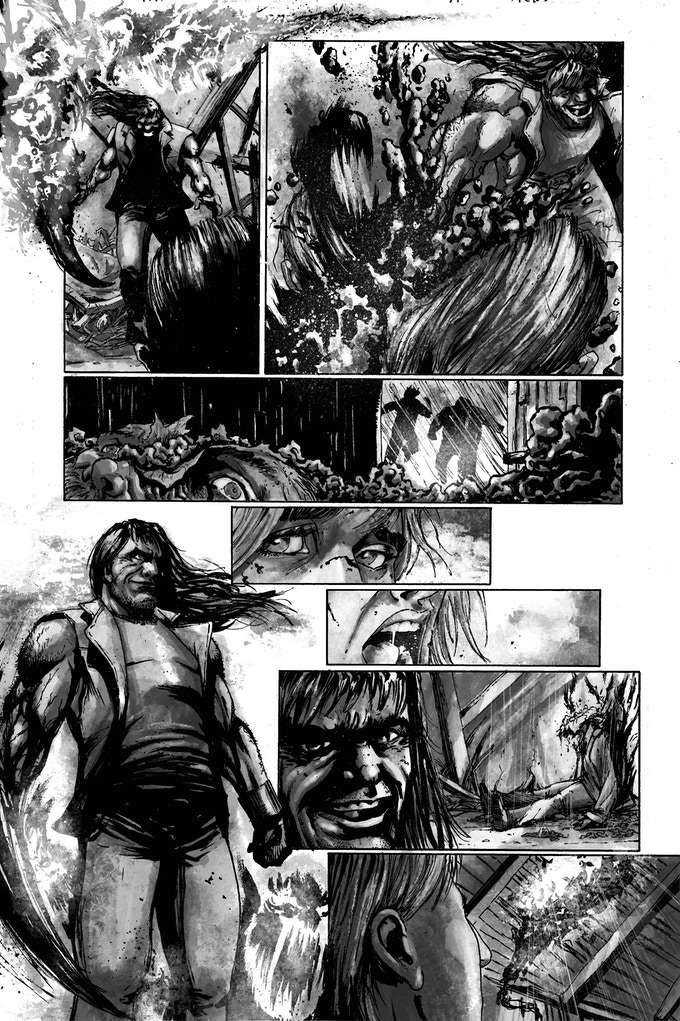 CB: Tell me where the idea for this comic came from, and led to self-publishing it?

RF: I have a long-standing love of horror comics and movies, and always wanted to write one of my own. After years of producing my all-ages comics, I decided to jump in the deep end of the pool of blood and gore. As my mind never stops creating, the initial idea for the story came after a long day of working my day job where I deliver fleet cars and seeing all the roadkill along the highways and byways. I started thinking about the animal’s back stories and their lives. Was their death simply an accident or was there more to the story of their demise? Over time, it has morphed into the current story and become more than just a take on some dead animals along the side of the road. 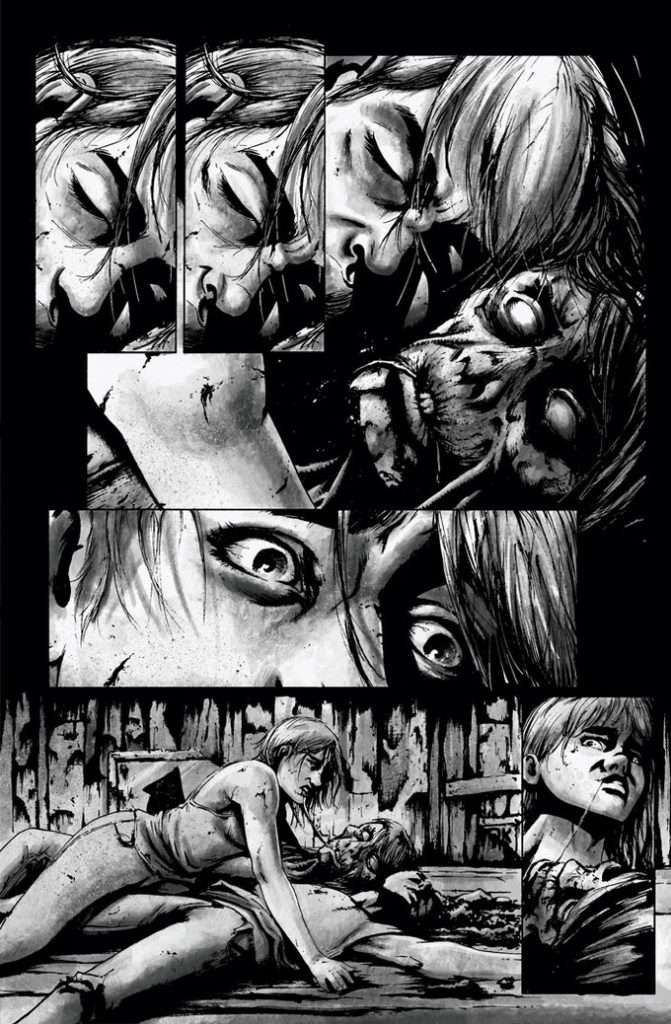 CB: Tell us about your style and creative process, and how you developed them.

RF: My style is wildly varied. I feel like at heart I am a creator and I have been creating for as long as I can remember. My career in self-publishing comics started back in the early 90s writing and creating with my high school friends our superhero comic The Superior Seven. After a hiatus from creating due to life, I came back to create my all-ages project Peanut, Puddin’ n’ Jelly, and subsequently Pitter Patter. Since my mind, rarely shuts off with ideas, it has always been a struggle to decide what project I am going to pour my time and energy into first. Roadkill Rampage was a long time in the making as it took me a while to find the artists I felt could bring my story to life. 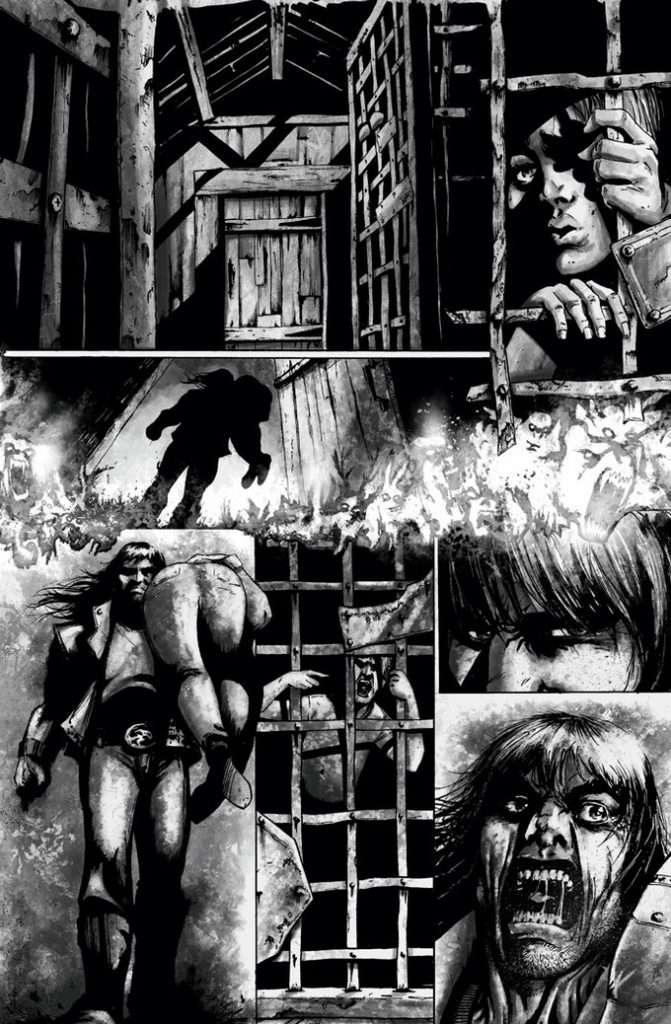 CB: Tell me about your creative team that contributed to this project.

RF: I am the creator and writer of the series and brought on Adam Fields as the artist for Issue #3. He is really bringing the blood and gore to the art. Dave Lentz is returning as our letterer and graphic designer. We have had 2 previous artists on the series; Eamon Hill (Issue #1) and Shawn Langely (Issue #2), and each artist has brought their own unique style to the series.

CB: How far along is the book? Ready to go to print?

RF: The art is approximately 75% complete for this issue at this time and Adam will have all art done by the end of the campaign. Once completed it will go off to Dave to finish lettering and post-production. We plan to have the campaign fulfilled and in the reader’s hands by November 2022. This is our 4th Kickstarter and all have been fulfilled on time. 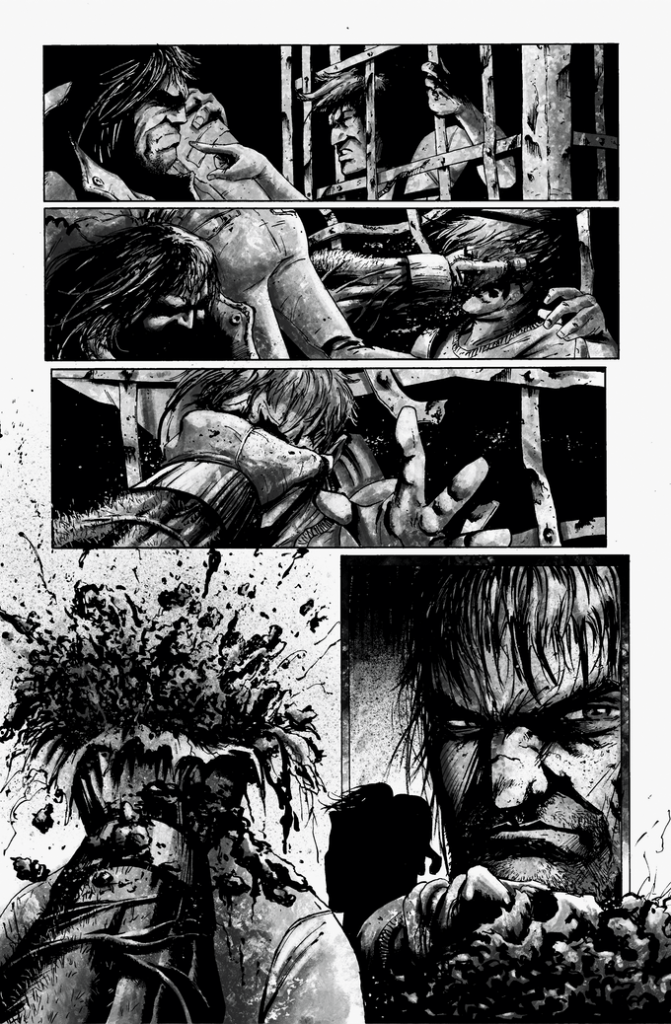 CB: That’s a solid record. So what have you been learning from self-publishing / crowdfunding?

RF: I have learned that self-publishing has to be your passion. My partner and I work tirelessly to make sure we are putting out a quality product and are committed to putting in the work necessary to do so.

CB: This is issue 3, so are there more stories to tell?

RF: I have so many stories to tell, my mind never stops creating. However, we will be wrapping up Roadkill Rampage with the 4th and final issue in the Spring of 2023. I also have another book that I write and draw that we also crowdfunded through Kickstarter called Pitter Patter.  I plan on releasing the 3rd Issue of Pitter Patter in Fall 2022, also through Kickstarter. After that, I am not sure what we will be doing next at Hazzum, but there are definitely more stories to tell.

RF: Yes, I self-publish all my titles with my partner, Tina McElhinney, through Hazzum Productions. We started Hazzum in 2009 and have published four titles and with Roadkill Rampage Issue #3 will have 12 issues released through Hazzum.