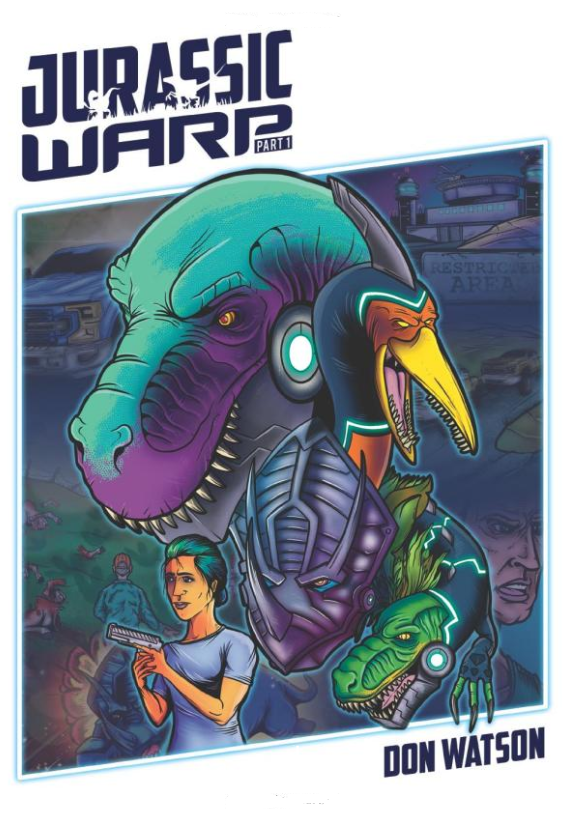 Check out the book here

Don Watson: A group of cyborg dinosaurs bred for war by the nefarious Mockingbird R&D decide to make their escape plan a reality. When they attempt to time travel back 65 million years to escape their masters, their plan goes awry and they crash land in the modern day era where their captors still exist to hunt them down. They must team up with an old ally to get their escape plan back on track, testing their bonds and willpower as their tyrannical master hounds their every step along the way. 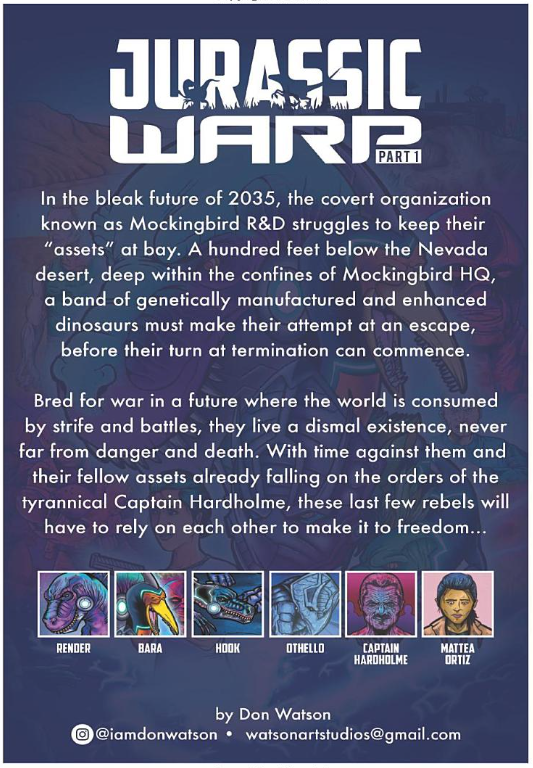 CB: Tell me your inspiration for this, and what led to self-publishing?

DW: Classic sci-fi movies were perhaps the biggest creative inspiration, but it was really the stories of tribulation that in-laws and friends of mine would share when discussing their immigration to Canada. It impacted me and I wanted to honour them, their journey, and their stories. It may be about dinosaurs and time travel, but at the core I believe it delivers a time-old tale of that “pilgrims passage” and the trials that come along with that. 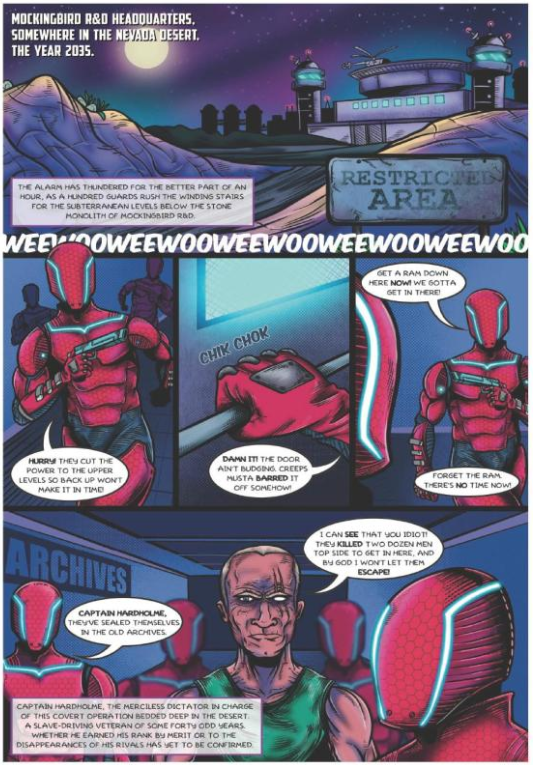 CB: Who is Jurassic Warp aimed at?

DW: Hardcore science fiction fans. Teens and up are ideal.

CB: Let’s discuss your storytelling style and creative process. Is this a solo endeavor?

DW: I am the sole creator and creative driving force behind the project, which was a major challenge. Having to flex skills I hadn’t used in years was an interesting and fun experience, and certainly made me appreciate all the different aspects that go into making a single comic possible for readers to enjoy. 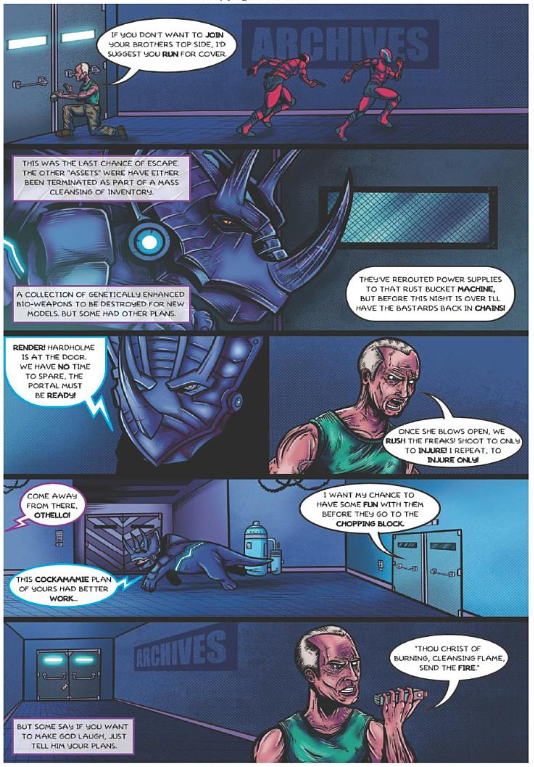 CB: When did you first get into comics?

DW: I’ve worked in the indie comic scene for about 10 years, starting off with pencil and paper, and now I work completely on a tablet. Moving to digital was a move that helped to hone my skills as an artist, as well as increase my productivity overall. It also helps that when I work on comics I have to put on classic sci-fi and horror movies in the background, so by the time I finished this comic I had watched every John Carpenter movie five times. 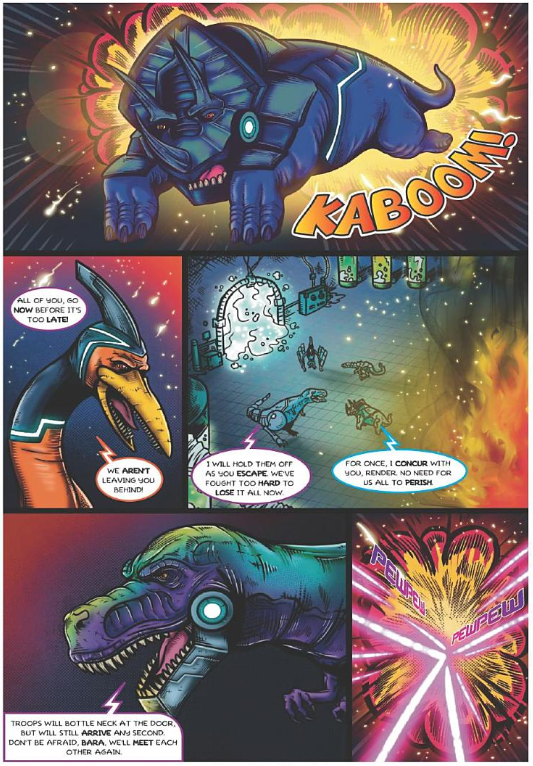 CB: This book is available on Amazon. Are there more stories to tell?

DW: Yes. Two more stories are in the works as we speak. I can think of so many more to tell within this universe I’ve created, but I want to only tell the ones that I feel will have a certain impact. I love swan song stories like Old Man Logan, Spider-Man Reign, so I definitely would like down the road to make a fourth book where we see old dinosaurs with creaking gears still rampaging around.

The second part of the trilogy will hopefully be published by next year. 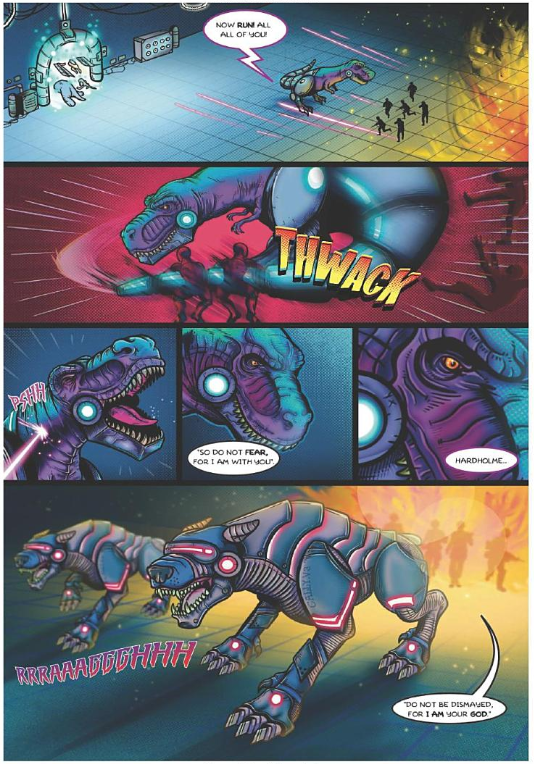 CB: What have you been learning from self-publishing and creating through this process?

DW: I work as a designer and marketing coordinator, so wearing different hats isn’t foreign to me. Publishing was a task as I had only known one way of doing things, such as bulk printing comics and selling them off issue by issue. I decided to publish via Amazon/Kindle and it was a game changer, allowing me to set up a platform where orders are fulfilled and shipped at once for my readers, saving me a fortune and time. Thankfully my experience with e-commerce and analytics made navigating sales, reports, and general stats came in handy. 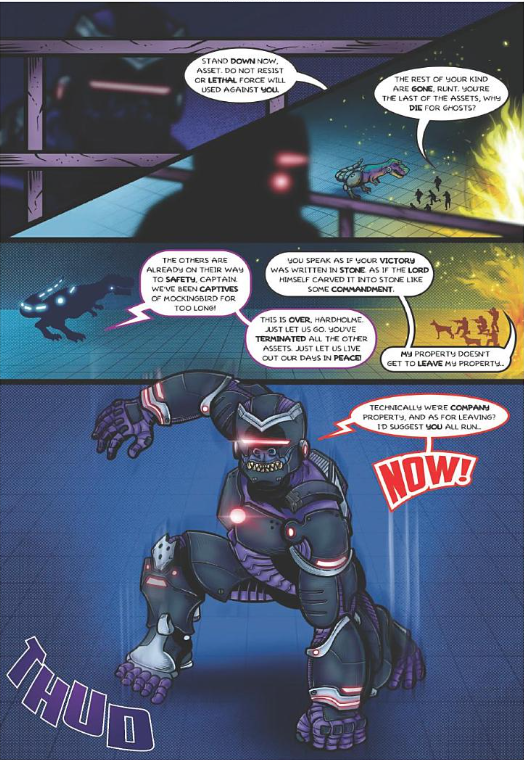 CB: That’s great, Don. What else would like to share with our readers before we wrap up?

DW: I hope that aspiring writers and artists, young and old, will get involved in comics by seeing people in their community taking the bull by the horns. Creating comics is a big task, but it’s fun and totally worth the time you put into it. Support your local creators, find them online and even if you can’t always afford their work then please share or like their stuff online.

Support local! I especially want to get immigrants and refugees into creating comics, anyone who isn’t being directly represented and have them tell their stories and bring a bit of their culture to the comic community. There are tools out there now that make this so much easier than it ever was before, so please start creating!

Check out the book here 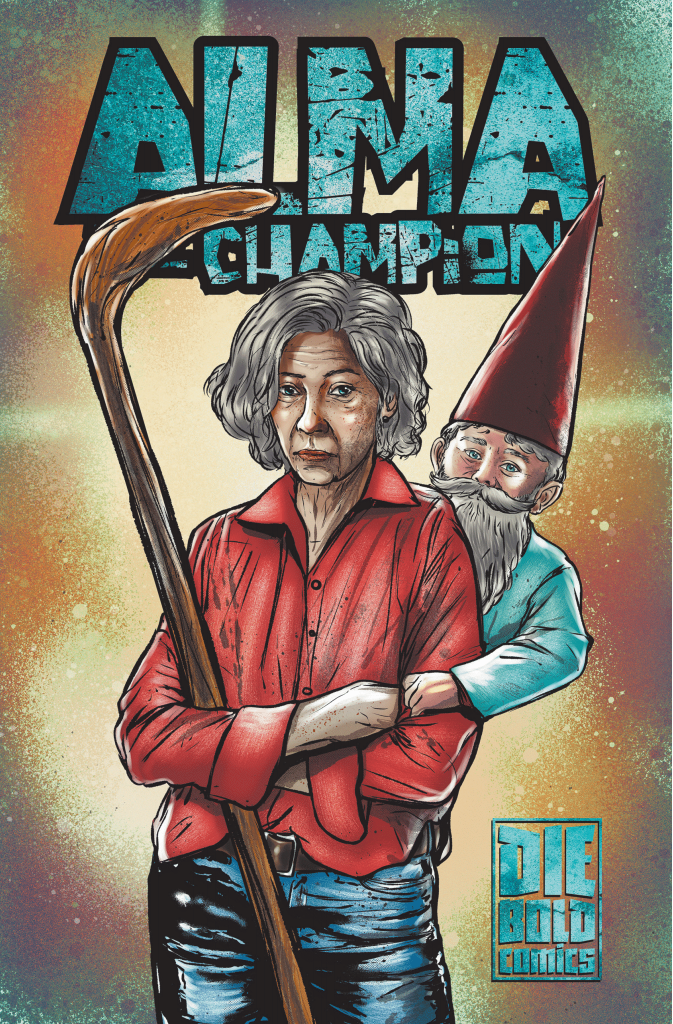 Chris Braly: Welcome to this week’s ICS, John. What’s the concept behind your new comic, Alma?

John Holland: What if Buffy was a 72-year-old grandmother? 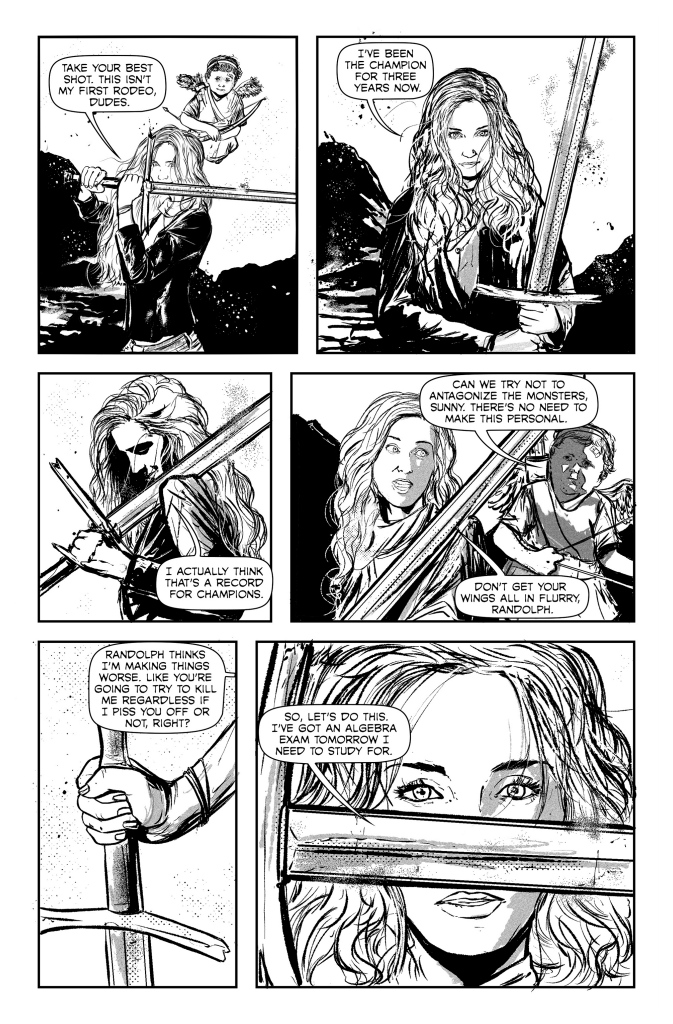 CB: Got it. How did you come up with the idea for this comic?

JH: From a comment in a Facebook group about heroes that are given powers are always young and what would happen if a grandmother got the power. 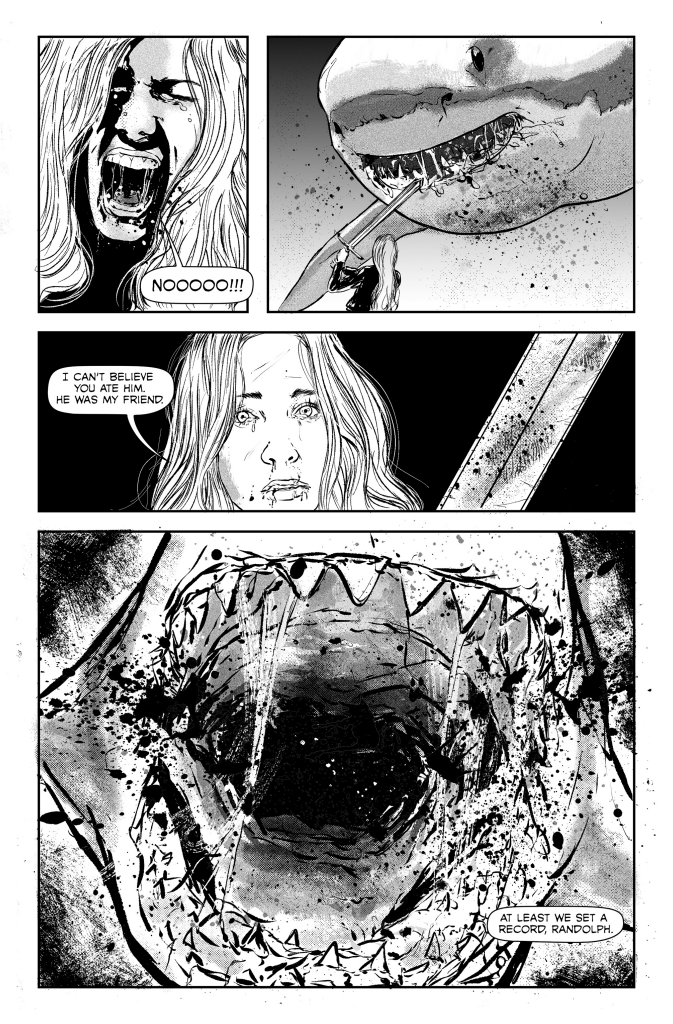 CB: What kind of comic fan is this best suited for?

JH: All readers.  Fans of Buffy the Vampire Slayer and other horror/fantasy related stories.  I’m also hoping it appeals to an older audience since the hero is older. 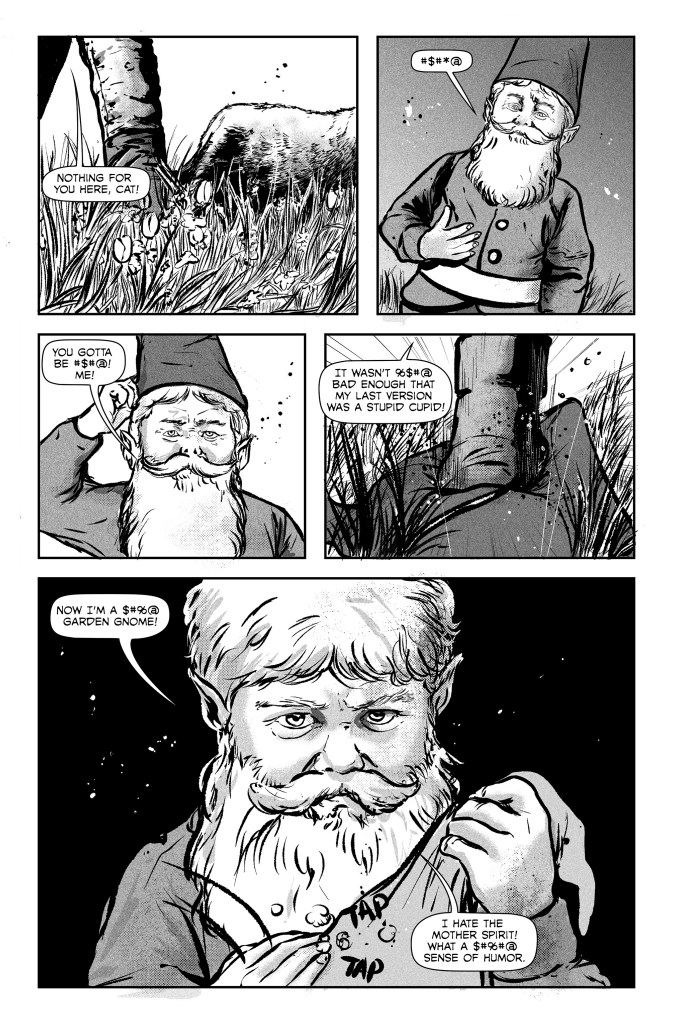 CB: Tell us about your creative team that contributed to this project.

JH: Hernan Gonzales did the art for this issue and continues to do the art for future issues.  He is amazing and his art fits the project perfectly. 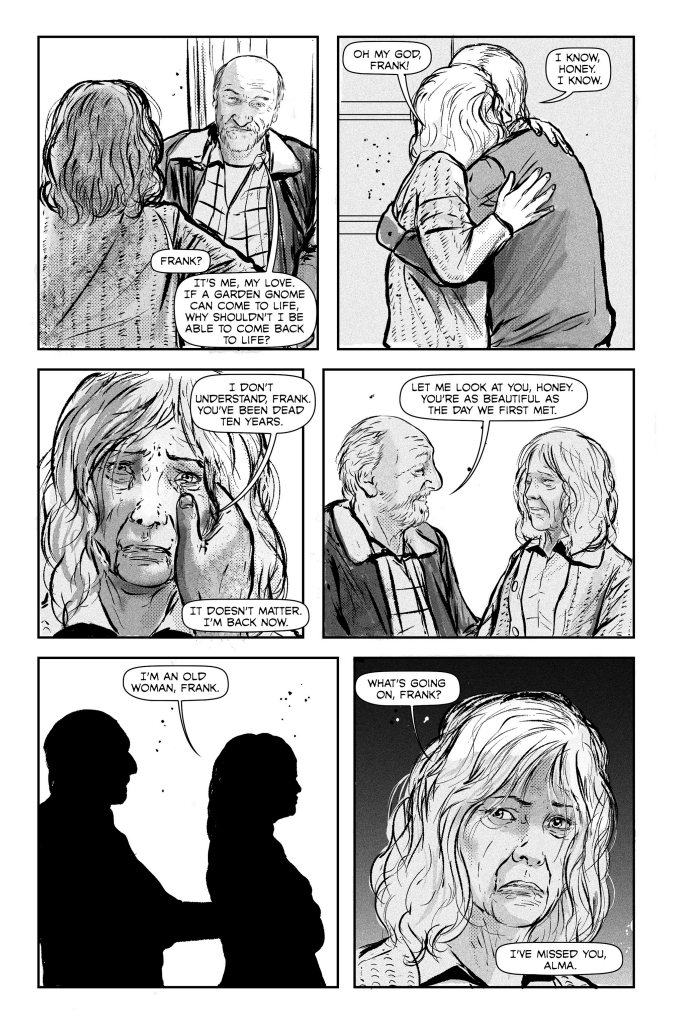 CB: What’s up after this comic?

JH: This is a continuing story.  The first issue is done, we are working on the third issue now. I am also working on other comics such as Robot Sex, Lizards, Life During Wartime and more.

CB: Be sure to come back and see us when those are available too, John. Good luck! 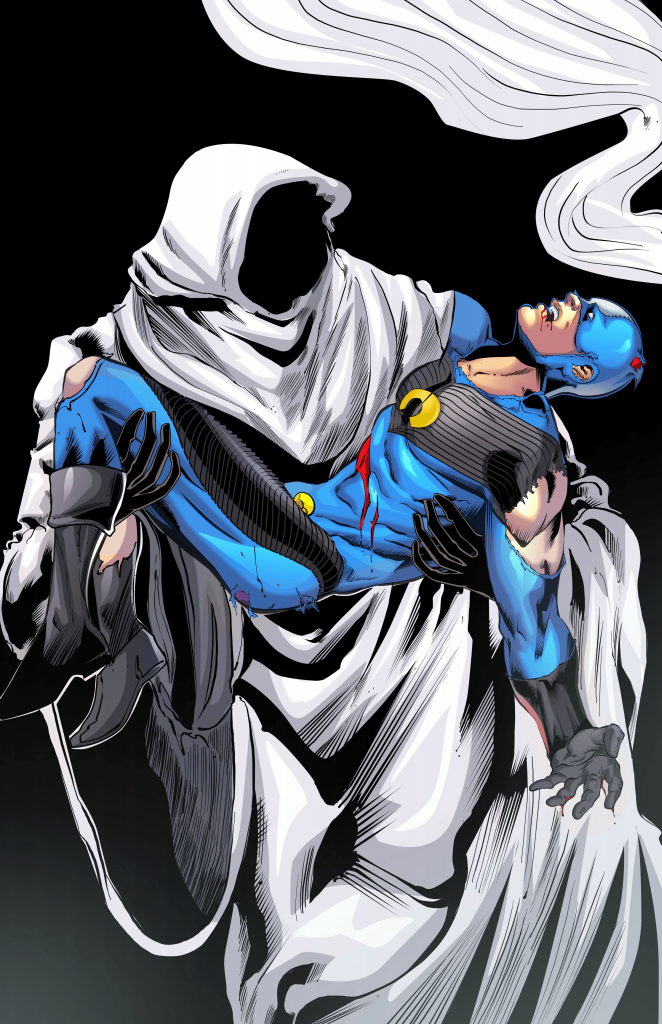 Chris Braly: Welcome to Indie Comics Showcase, J.R., give us the pitch for Saint

J.R. Dunbar: Saint is a full color graphic novel (150 pages) about a nameless vigilante who dies a gruesome and unfair death, only to be reborn as a super-powered being. As Saint, he operates as an agent of the After Realm and works to abolish evil and maintain The Balance. Saint is unique because it uses various mediums to tell the story (graphic novel and novel), as well as segues into a indie multiverse project, “Broken Realities”! 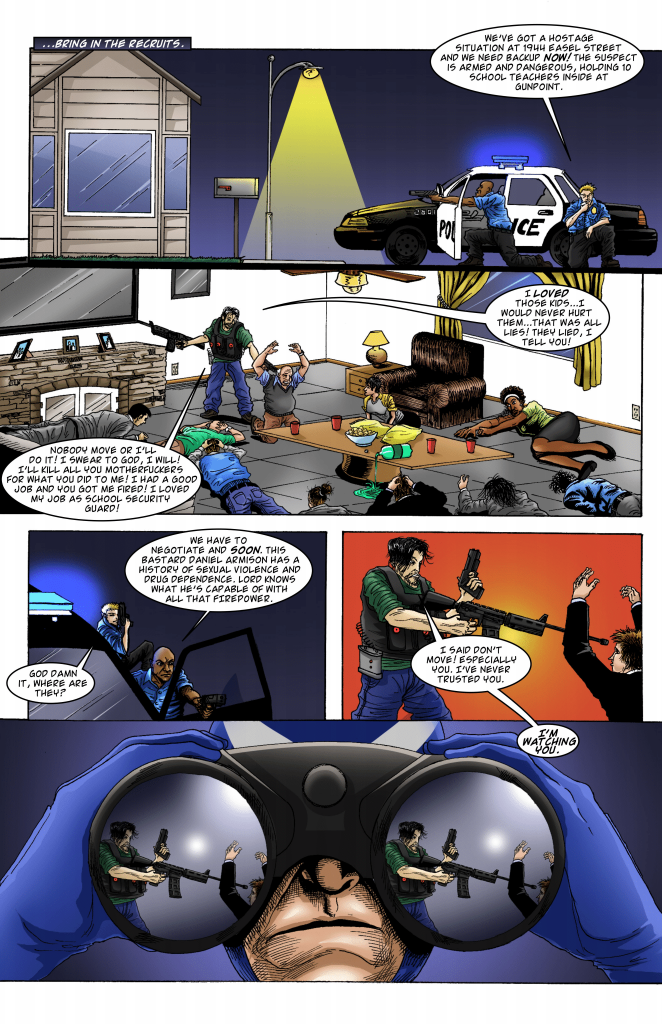 CB: What was the inspiration for this graphic novel?

JR: Saint is heavily inspired by darker comics such as Spawn, The Boys, and Watchmen. I decided to self publish it because I didn’t want the restraints associated with working with a publisher, and wanted to maintain my IP, as it is my first work.

CB: What kind of comic readers is this suited for?

JR: Saint is aimed at readers who enjoy gritty and more realistic comics, especially those of the superhero variety. If you’re not a fan of unexpected turns, over the top gore, and deeply troubled heroes, then Saint is NOT for you. 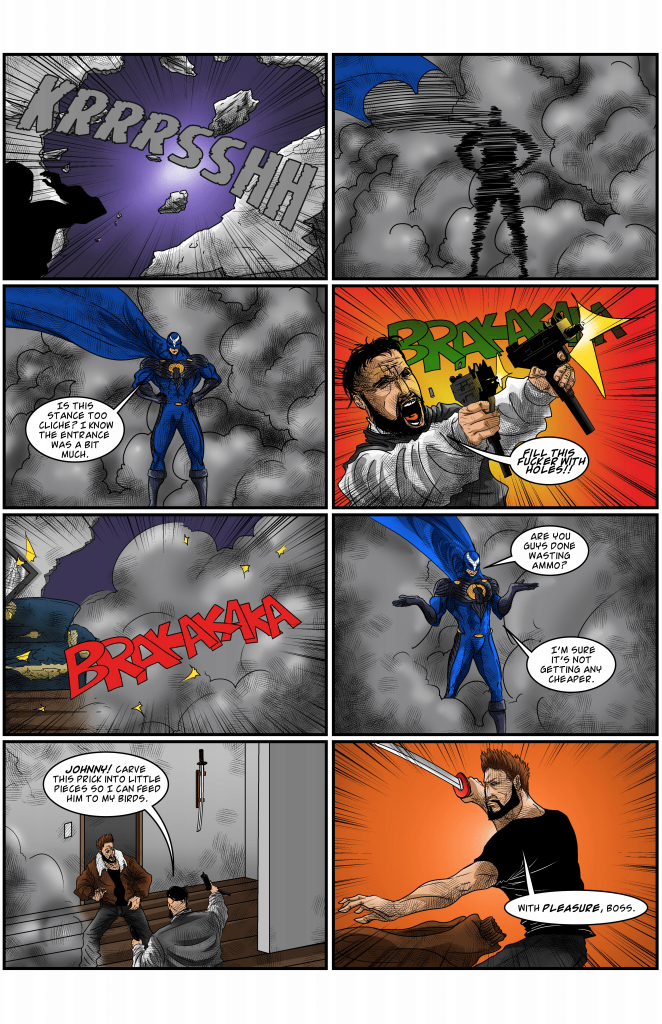 CB: Is this your first comic work? Have you self-published before?

JR: Saint is my first work and I must say that I am extremely proud of it! I did the writing, editing, and lettering. It is not perfect by any means, but it is a story that I had in the back of my mind for years, so it felt amazing to finally refine it and get it out into the world. I have always been a comics fan and have done a lot of creative writing over the years, so creating the script came quite naturally to me. I’m not going to say that I didn’t fumble my way through the process…but I loved it!

I also had the opportunity to work with some amazing artists on this project! Ayodeji Afolabi did the main part of the book, and Rich Hennemann did the epilogue. Both artists do each step themselves (pencils, inks, colors). 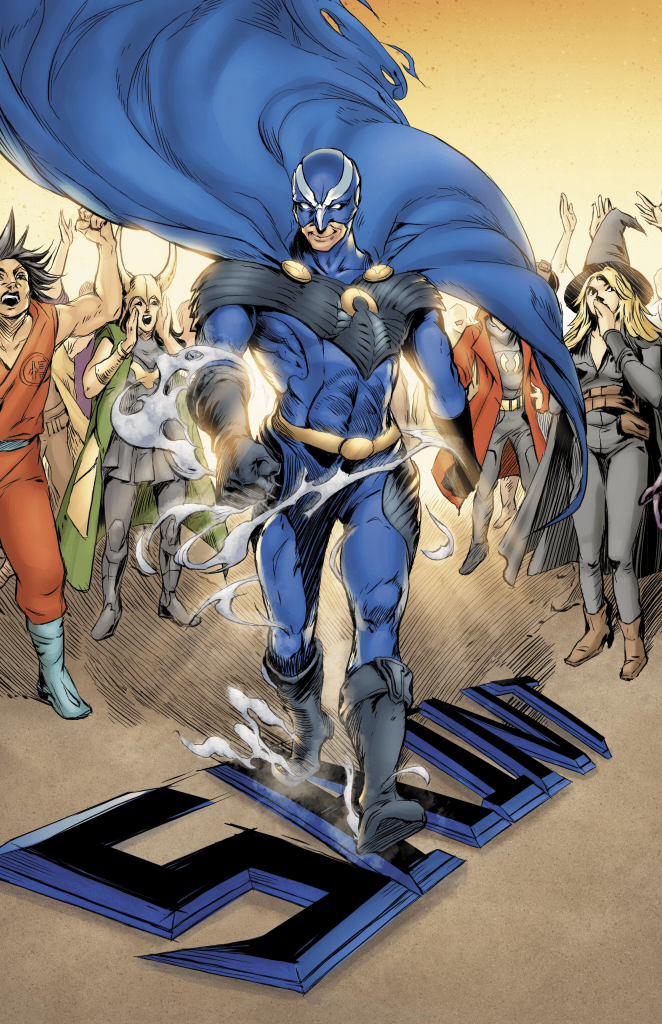 CB: Since it’s all you, what’s your production workflow like?

JR: I had no idea how to approach it when I started, since I had no experience or friends in the industry, so I took an odd approach and completed the entire book before releasing it. Looking back, I could have released each issue separately, but I’m happy with how it turned out 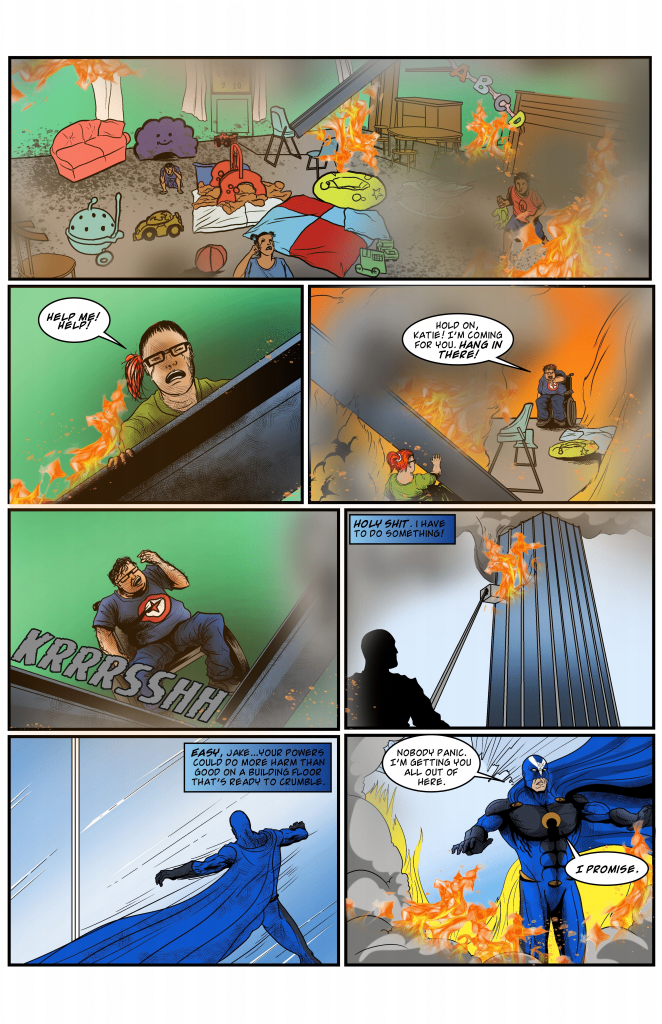 CB: So what are you been learning from self-publishing through this process?

JR: I learned LOTS! From writing a script, finding artists, lettering, crowd funding, to publishing, there was lots to learn. I’m fortunate to now have a large network of creators and lots of knowledge about the industry, which will help with future projects.

CB: Any plans beyond this book? Are there more stories to tell?

JR: I am currently finishing a novel, which is a sequel to Saint Volume 1. After that, I’ll move onto Volume 2. I plan to have 3 volumes and 2 novels to complete the series! I like the idea of combining mediums to tell one cohesive story. 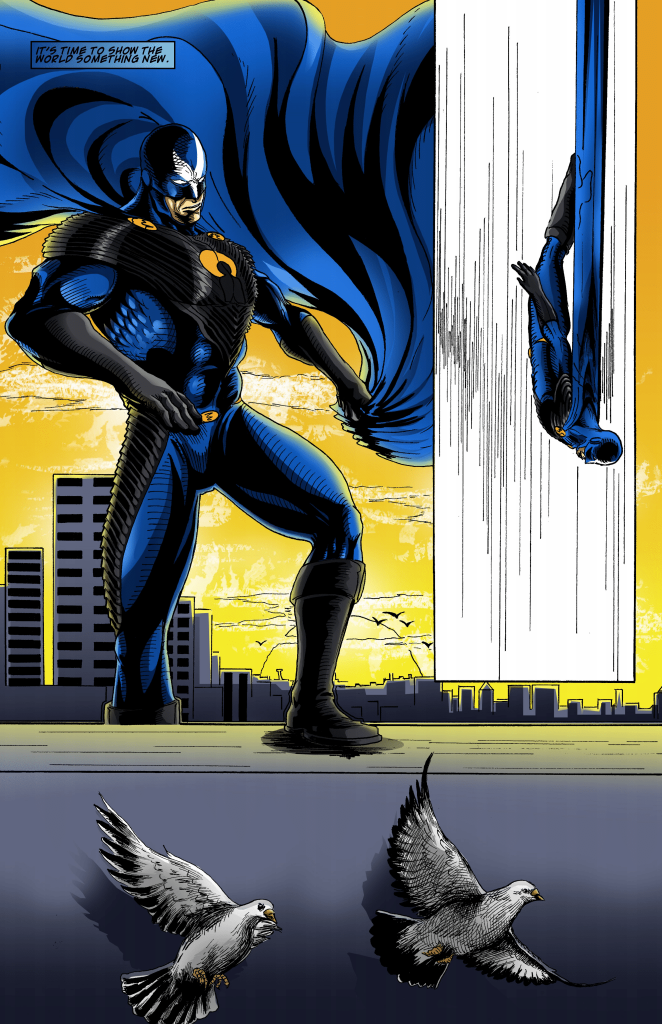 JR: Thank you for checking out Saint! Please check out jrdcomics.ca and the Broken Realities website: https://broken-reality-comics.com/

Having Yourself a Crappy Little Xmas? Depressing Yuletide Songs & Films