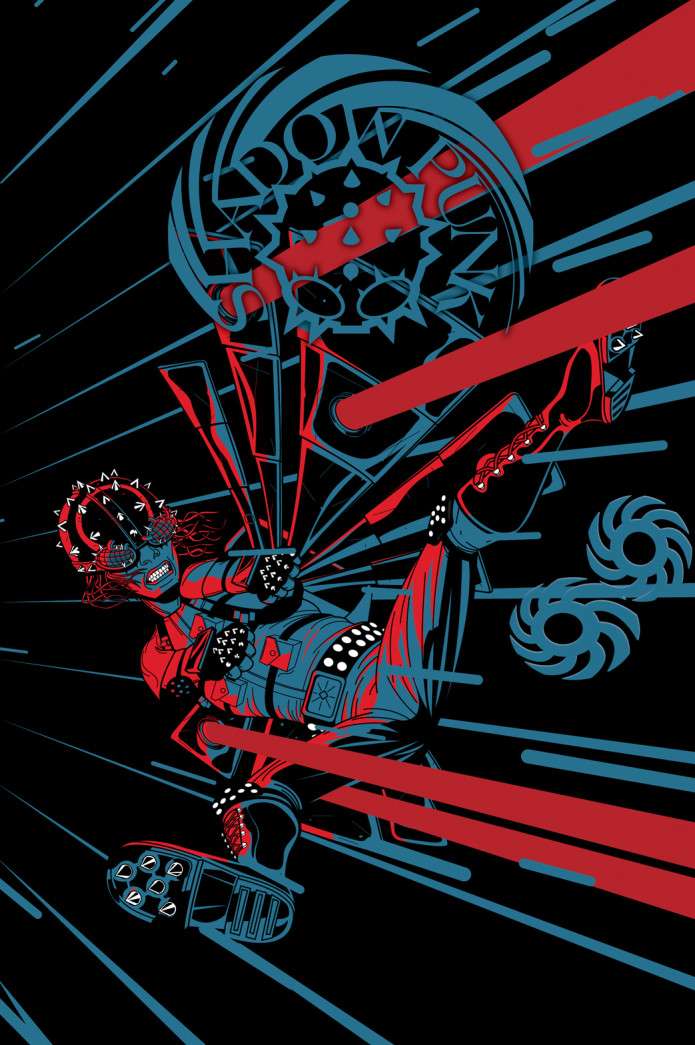 Chris Braly: Welcome to Indie Comics Showcase, Matt. Give me the elevator pitch for Shadowpunk.

Matt Simecek:  Detroit, or what’s left of it. Out of an Age of Chaos a New Evil rises to dominate the city and all those inside. Against all odds, one girl survives. Lost and alone she’s on a mission to find her family. Can she do it? Will she be strong enough to uncover the lies and break through the barriers in her way? Is she brave enough to bare the dark truths that await her?

This story begins the adventure that will take young Mera from the very top of the city down into it’s dark underbelly. But she’s not alone. A Small Resistance has gone into hiding, waiting for the day when they will emerge and fight back! Today is that day! Enter the World of Shadowpunk! 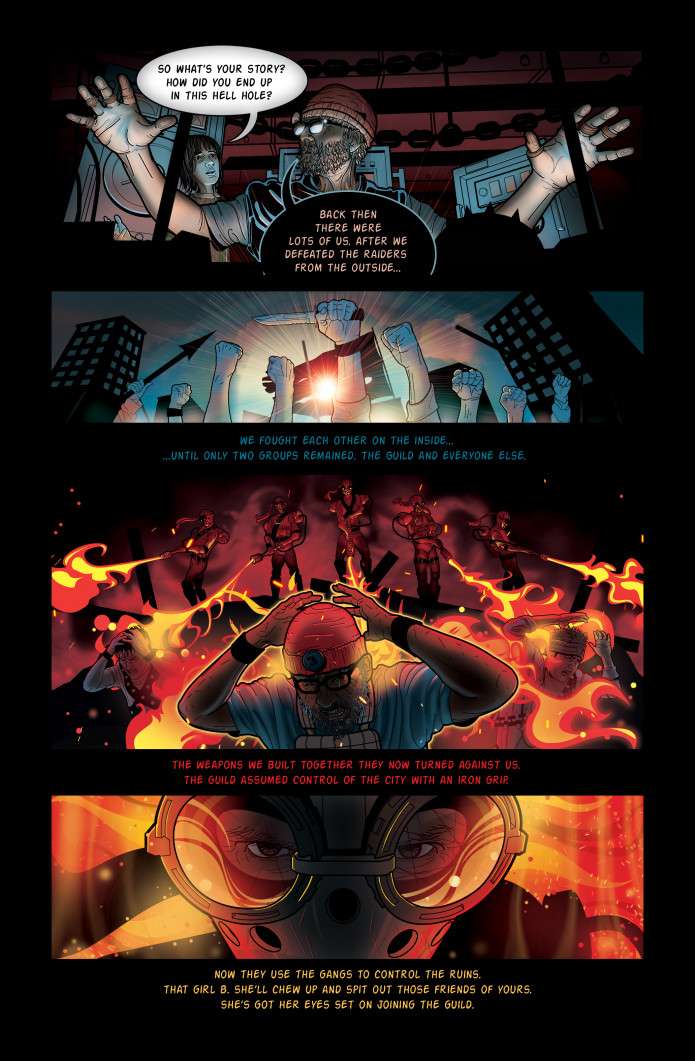 CB: Tell me where the idea for this comic came from, and what made you decide to self-publish it.

MS: Sure! The comic book actually came out of the animated movie I created about a girl traveling with her family in a dystopian future.  As a 2D and 3D artist, I utilized yjr 3D environments with drawing, vector inking and bold colors. So this creative process is a result of my working in the motion graphics industry.

CB: What kind of comic reader is this best suited for? 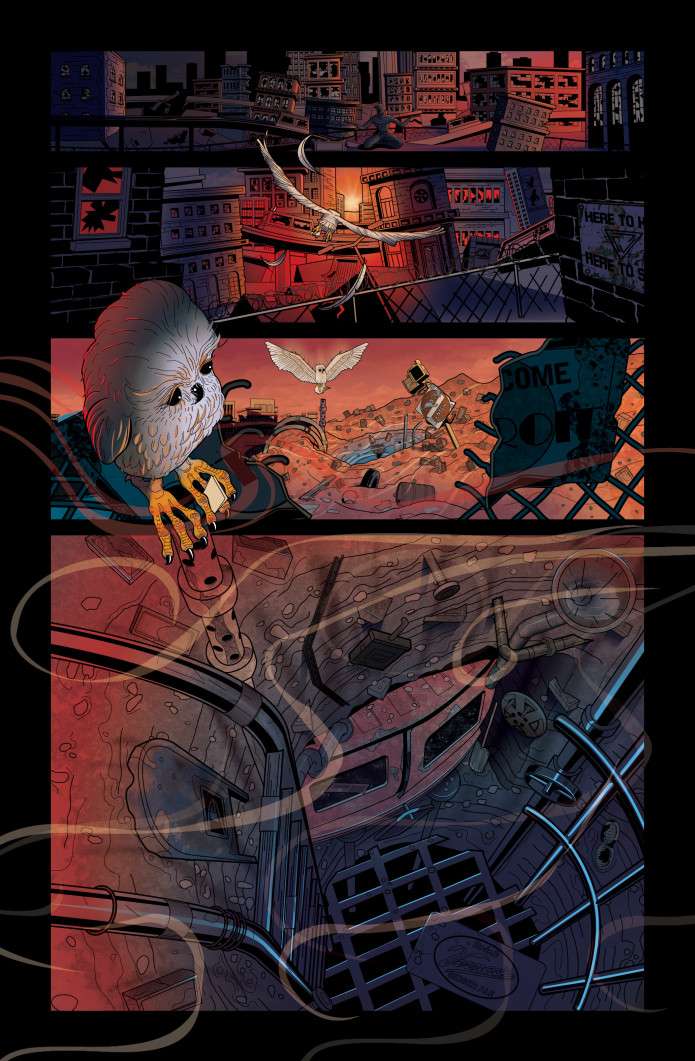 CB: Do you have a creative team on this, or is it a solo project? And can you tell me a bit about the workflow involved?

MS: Yes, I’m the sole creator. I’ve been a working artist for around 25 years with my background in Motion Graphics, Compositing, Effects and 3d sculpture. I like to layout my scenes, very roughly in a 3d environment, using simple 3d rig stand-ins for the figures. If i have a lot of architecture, I’ll roughly build those in 3d as a template. I’ve completed ten drawn, inked, and colored pages on the book so far, and penciled and inked many more. 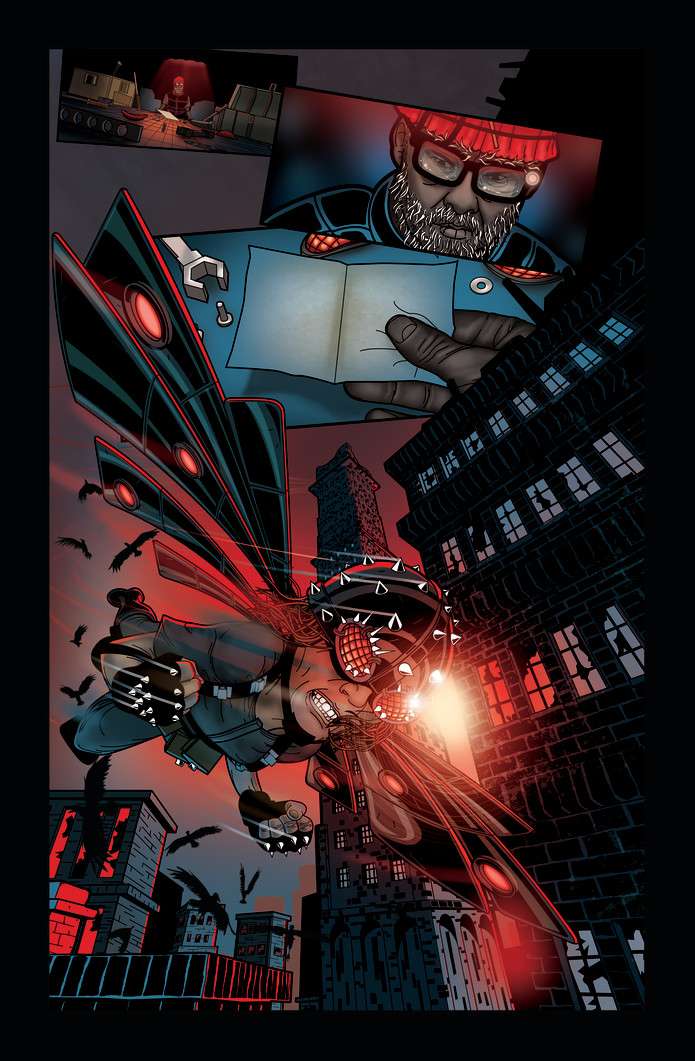 CB: So what are you learning from self-publishing and creating through this process?

MS: Promotion is vital. if no one knows about your work your project will not succeed.

MS: Yes. I’d love to continue my Hero’s story for many issues to come. 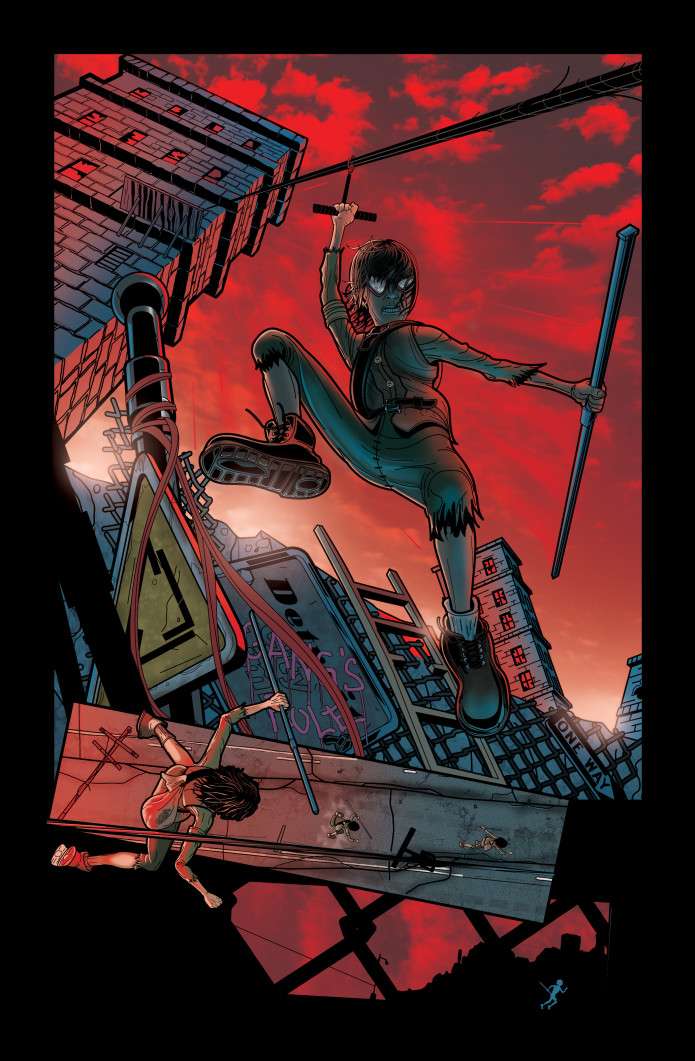 MS: Yes, my first day backers got a red foil trading card. And I also created a 3d figure of my central character Shadowpunk. It’s also available on my campaign. Please check it out! 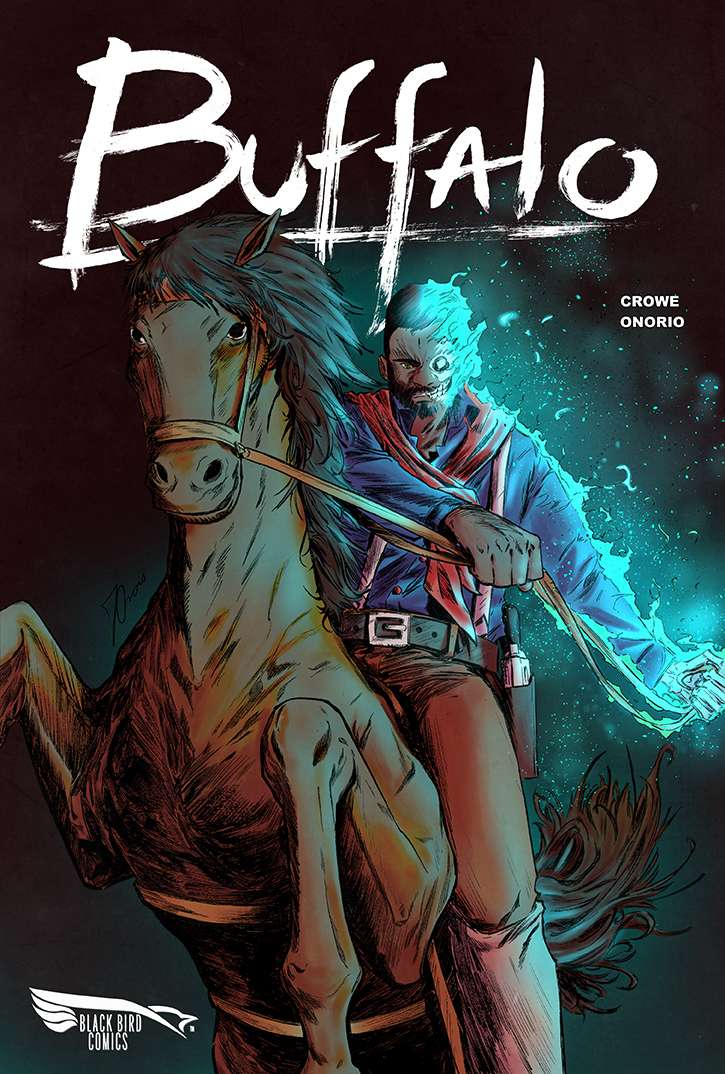 Chris Braly: Thanks for joining me on Indie Comics Showcase, Elijah. Hit me with your elevator pitch for Buffalo.

Jarmane Warren is dead. He died in a cave in the Philippines while serving during the Moro Wars in 1898. However, the cave which was meant to be his final resting place happened to contain mystical artifacts brought there by Spanish monks 300 years earlier. These artifacts kept Warren alive, caught between the spiritual realm and the physical. Now Warren must find a way back to America, but when he finally returns, the new world is much different than the one he left.

We only need a relatively small amount of funding to launch Buffalo Issue #2, which will be a 32-page, fully colored, action packed saddle stitched floppy comic book. 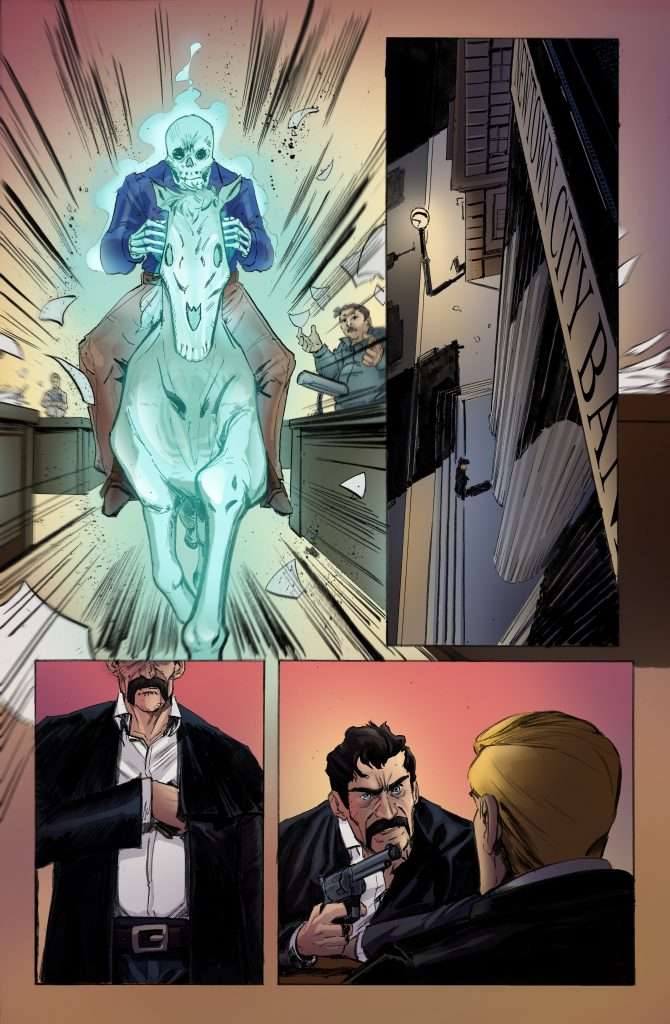 EC: From my head and the history of the Buffalo Soldiers. I decided to self publish because I wanted to control every aspect of our product. I am a passionate lover of comic books. Over the past decade I’ve felt, like many others have, that the mainstream comics have lost sight of what excited us fans about superhero comics. That’s why I want to run my own line of comics and create a cohesive universe. 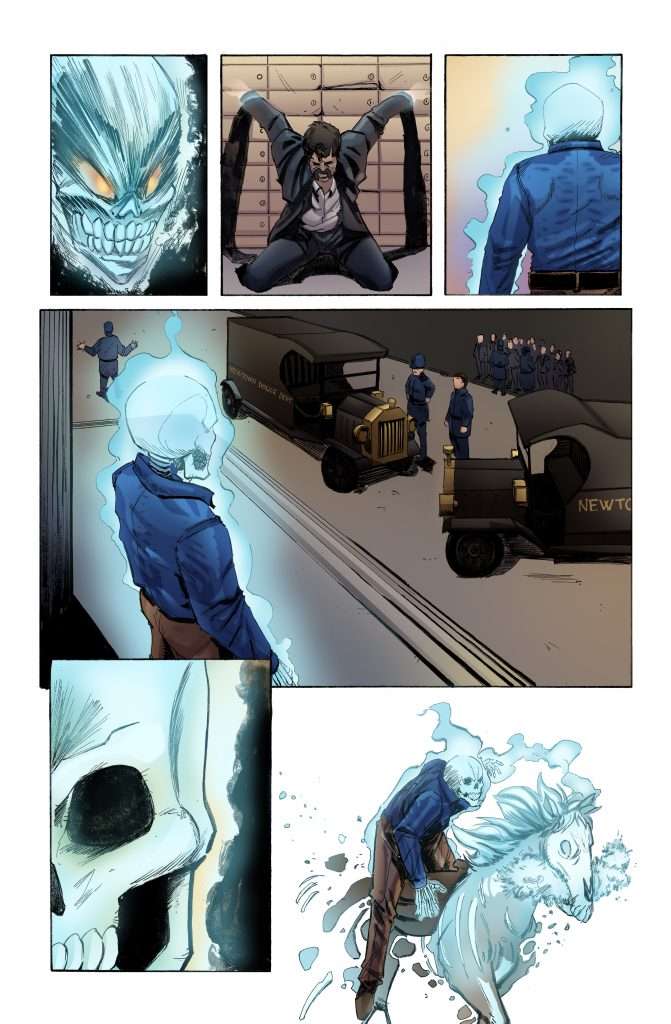 CB: Tell us about your creative team on this project.

EC: The art is done by the talented Francesco Onorio (Spain) and the colors were done by Jonathan Lima (from Brazil). Francesco is an amazing artist who can take the information from my script and execute perfectly on paper. I couldn’t have a better, more in-sync artist who gets the material. Our colorist, Jonathan Lima is a work horse, cranking out pages before I can even blink. His colors and lighting techniques are fantastic. Love my team for Buffalo #2. As the writer, I find myself mostly using the things that have been in my head since a boy and during my time in the Army. I am still on active duty, going on 19 years. 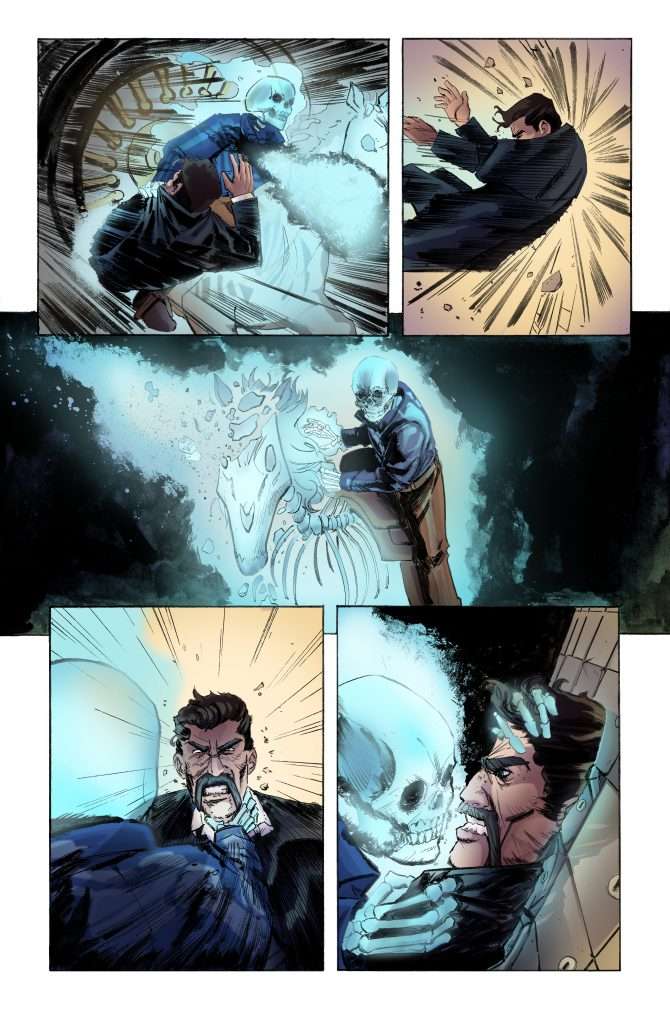 CB: I know the first issue is complete. How far along is issue #2?

EC: We are five pages into Buffalo #2, and are currently on schedule to complete this book by October.

CB: What have you been learning from self-publishing / crowdfunding and creating through this process?

EC: It’s long. The end. No, seriously, I’ve learned that every penny is earned in sleepless nights, early mornings, and a ton of out of pocket expenses. 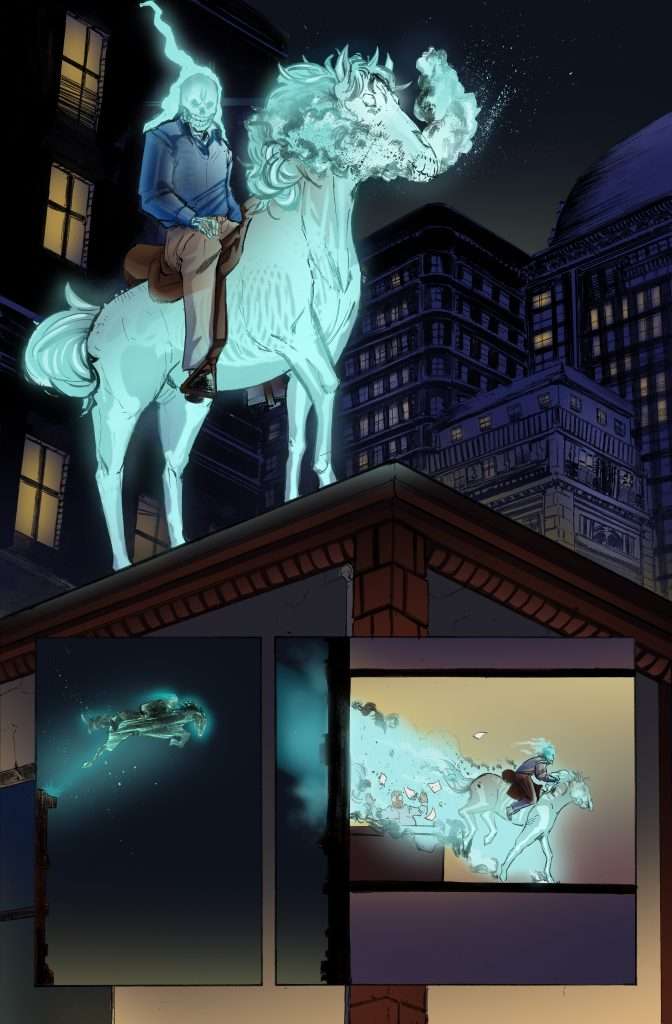 CB: Do you have any plans beyond this next issue?

EC: We will eventually make our universe building in a graphic novel that ties in our other books and coming characters/teams. I have a lot I want to do.

CB: Good luck, Elijah. Any final words you want to share with our readers?

EC: I just want others to get out the word to stop support the “big 2” and instead the thousands of talented indie creators. 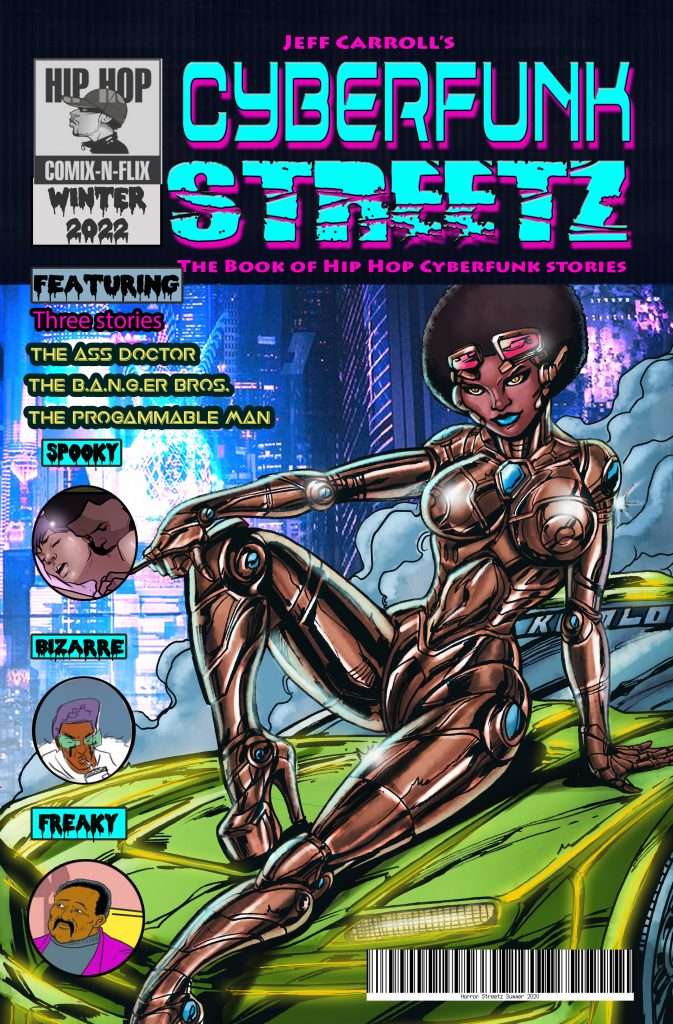 Check out the books here!

Jeff Carroll: Cyberfunk Streetz features three creepy stories which will make readers think. The stories answer three different questions about the future of human sexual relations. In the B.A.N.G.er Brothers the impact of virtual dating and socializing is the focus. The use of VR glasses and suits already allow to people the ability to look around a virtual world. First person shooter games give users the sensation that they are inside the game and companies like Tesla are already working on gloves and full body suits.  So, its not far away that we will soon have virtual interactions that will give people sensations that the same as if they were having a face to face interaction.

In the Programmable Man a program is developed that can turn the security robots into the ultimate love machines. Blow up dolls are already being used to so it’s not hard to imagine that robotics will be the future of these love dolls.  The Ass Doctor speculates about the future of cosmetic surgeries. Butt lifts and breast implants are no longer things to be ashamed of. They are now spoken about openly. People are having them performed on television. Its not hard to imagine that in the future they will become so comment that they will be the norm. Cosmetic surgeons will be celebrated like rock stars. 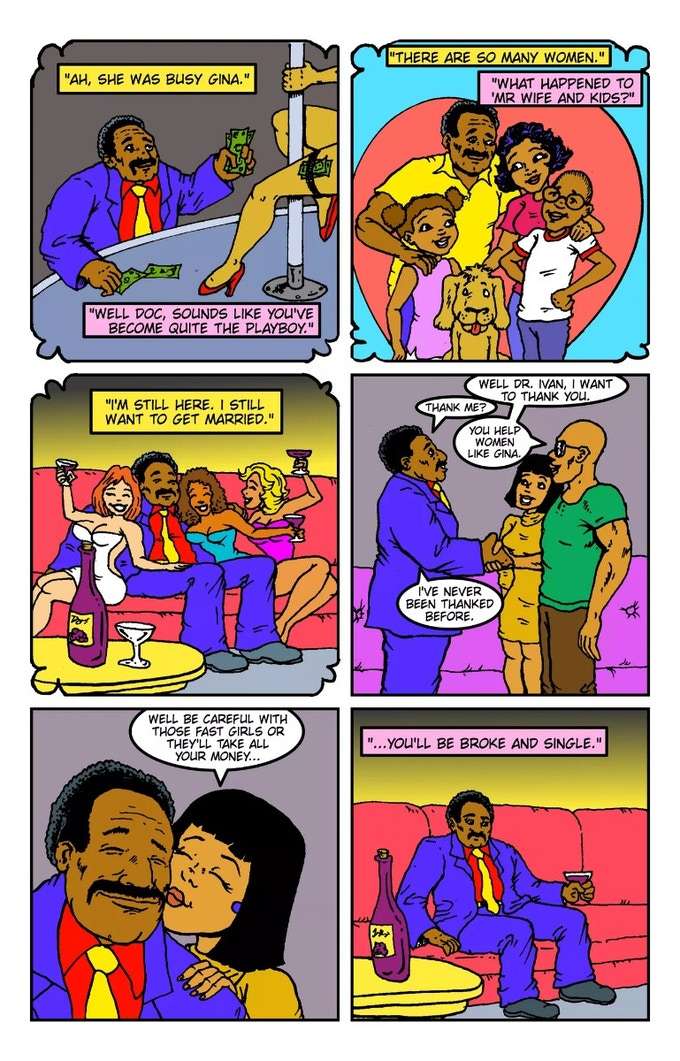 CB: So where did the idea for this comic come from, and made you decide to self-publish it?

JC: I am a dating coach and sci-fi writer and one day I decided to think about the future of sex.  Then I thought of three themes. This comic is for nerds… sexually active nerds who like comics. 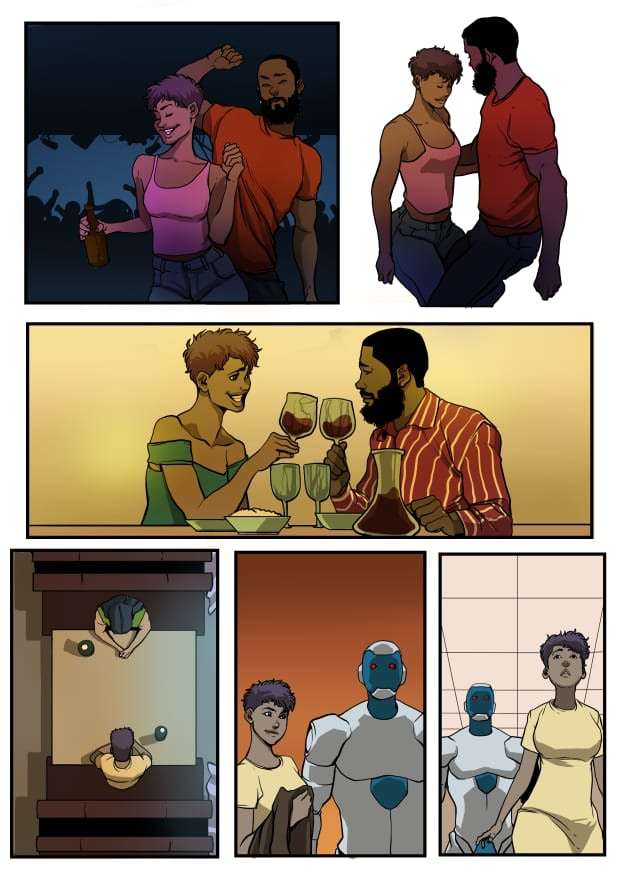 CB: Tell us about your style and creative process on this project?

JC: I start by telling people my ideas. Mostly, close friends, but sometimes strangers. Then I write them down. Then I write an outline and then the script. I made a mock late night TV show where I am the host. In between each story, I introduce one of the sponsors like it was a commercial break.  I had posters of the cover girl Cyber Bae and her partners.

CB: What can you tell me about your creative team that contributed to this project?

JC: For this comic I used three different illustrators.  Alan St Clark, Joey Martinez, Rolo Ledesma and Zebra Comics were all illustrators that I felt had unique styles that would fit the stories. The book was released in March.  It took about 6 six months to develop. I worked with the illustrators over the internet.

CB: What are you learning from self-publishing and crowdfunding through this process?

JC: People want comics that are different. They will respond well and help you develop your comic book if it is fresh and different.