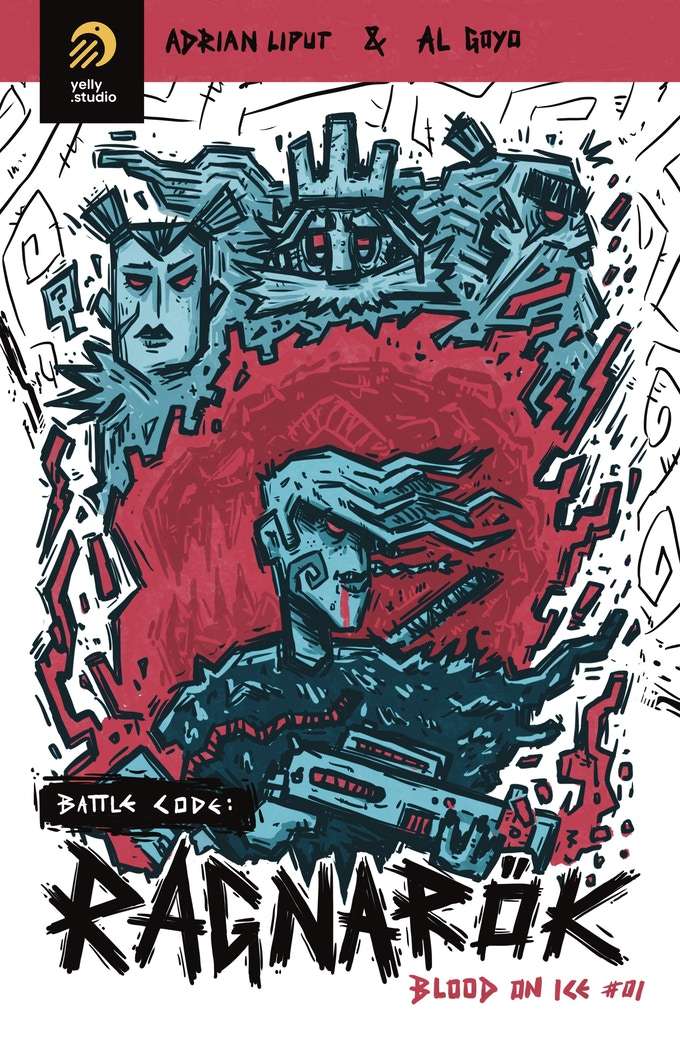 Chris Braly: Welcome to this week’s Indie Comics Showcase, Adrien! What can you tell us about Battle Code: Ragnarök?

Adrian Liput: “Battle Code: Ragnarök” tells the story of Torhild Einarsdottir, who at a young age inherited the title of the jarl of Trondheim, one of the moons in a distant corner of space. Torhild has no easy task: she constantly has to prove her worth in the eyes of her warriors. All this while taking care of the people of Trondheim… which usually boils down to providing them with another opportunity to raid and pillage. The comic is a 24-page story, fully colored. And an additional 4-page prequel will be added when we exceed the 400% with our campaign (currently, we’ve got 240%). 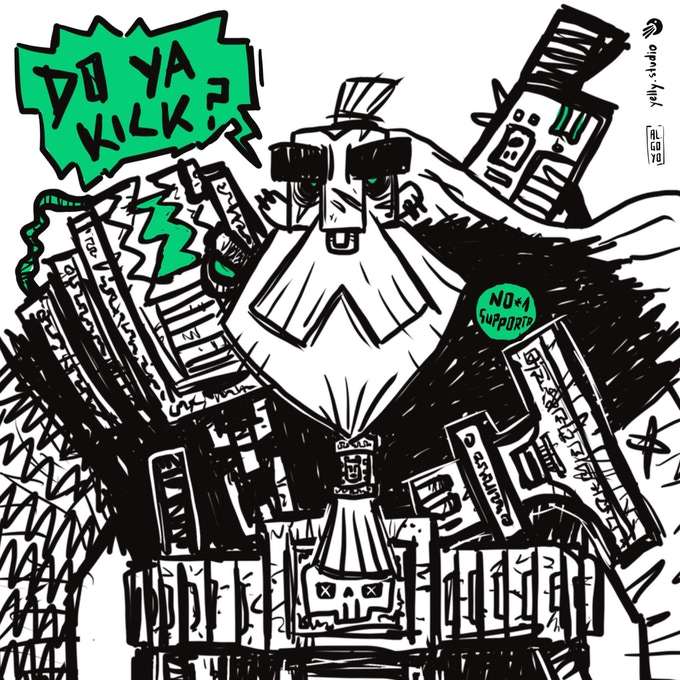 CB: So where did the idea for this comic come from, and made you decide to self-publish it?

AL: The idea for this story came after finishing the game “Assassin’s Creed: Valhalla.” After 3 months of the playthrough, I got so used to the game that I felt like I wanted to stay in the futuristic Vikings vibe for some longer… So I wrote a hastily-concocted short and sent it unedited to my illustrator pal AL GOYO who immediately said we should turn it into a comic. The rest is history.

Since we wanted to have complete control over the creative process, we ignored the option of sending the finished story to a publisher. Instead, we’ve decided to found our beloved yelly.studio. Sailing into uncharted waters on our own ship was much more tempting, yaRrr! 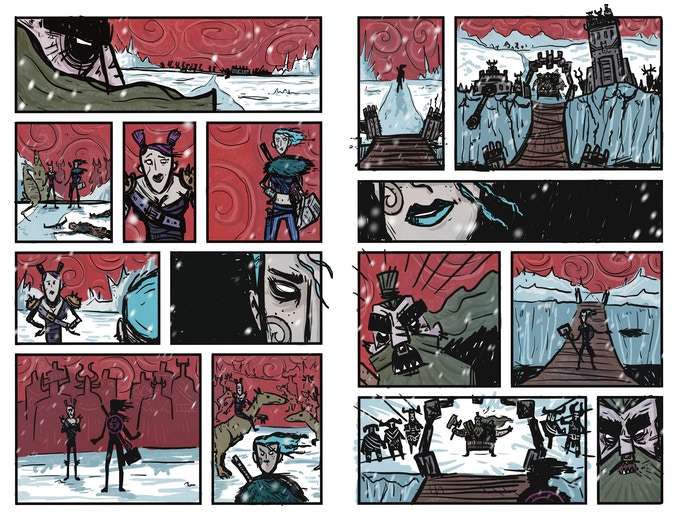 CB: What type of comic reader will this be best suited for?

AL: Everyone who likes Viking stories will find here something for themselves. Our comic book presents familiar Nordic themes in a completely new way. BC:R is definitely a thing for people who like unusual, quite crazy settings. Of course, “regular” sci-fi fans should also feel satisfied. 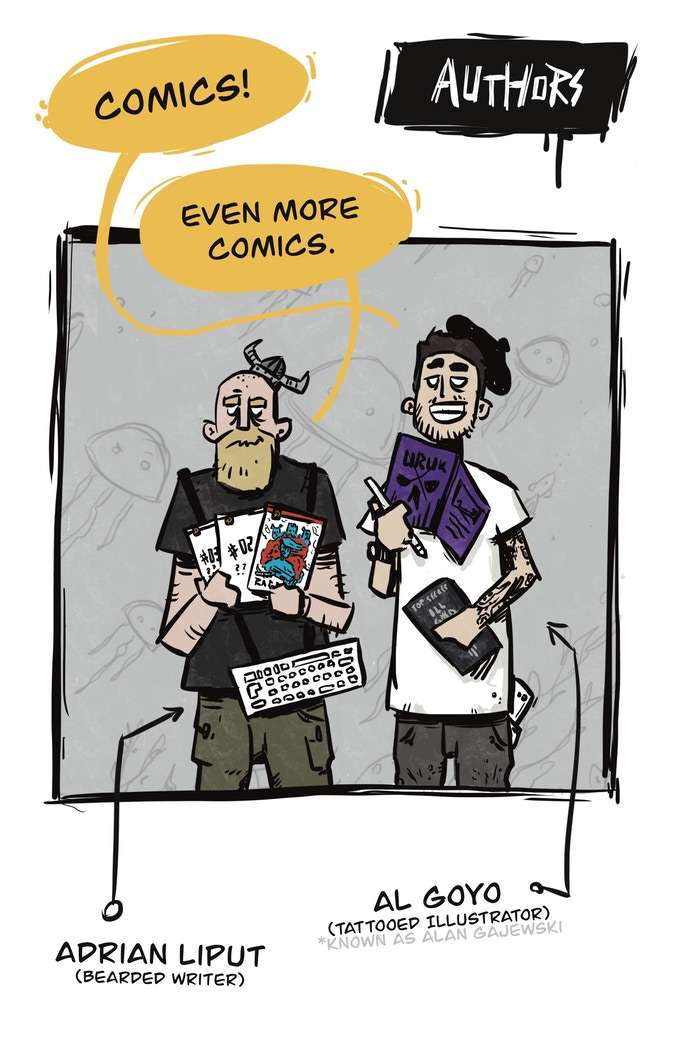 CB: Let’s get into your creative process a bit. What were you bringing to this project?

AL: This was my first comic book with Al Goyo, so we had to work everything out from scratch. We collaborated on many other projects before, so it wasn’t that hard. The assumption was that the script should leave him some space, which he could fill with his ideas. And he did it brilliantly – this comic is a team effort in every way. 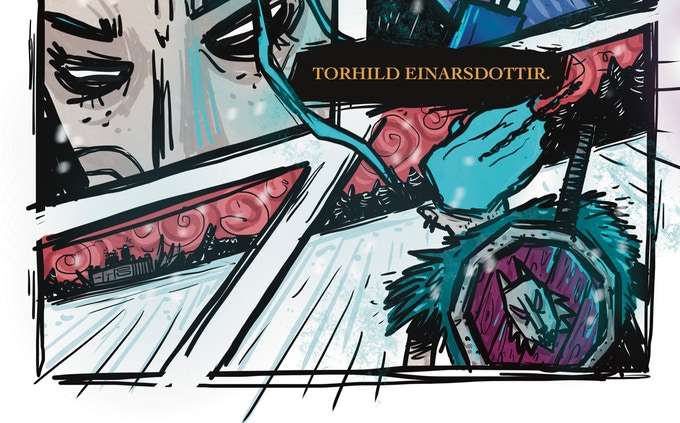 AL: Al Goyo is a talented illustrator with a passion for fantasy and sci-fi. We’ve quickly found common ground, and our skills and interests complement each other perfectly. He has a distinct style and always manages to portray a scene exactly as I intended… Or even better. 😉

CB: Are there more stories to tell in this world?

AL: Yes! We have two more installments of “Battle Code: Ragnarök” planned, but we certainly won’t stop there. Each of us has accumulated a lot of ideas over the years, and soon we’ll start turning them into more comics! 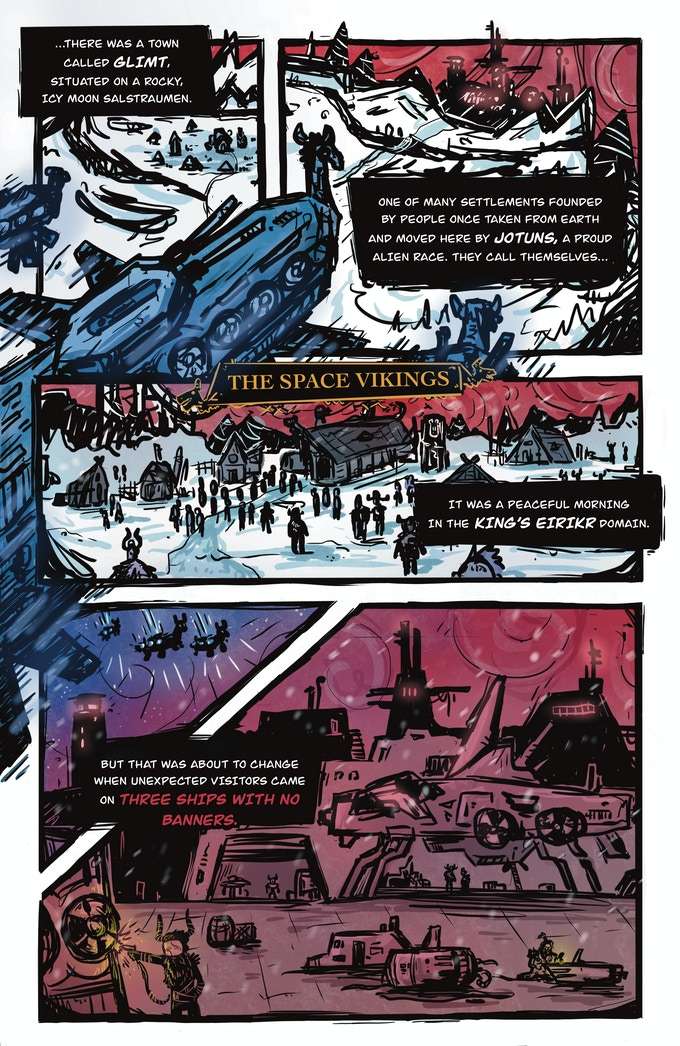 AL: Yes! Thank you so much to everyone who backed our comic on Kickstarter. It means the world to us! “Battle Code Ragnarök” will soon be in your hands… And this is just the beginning! 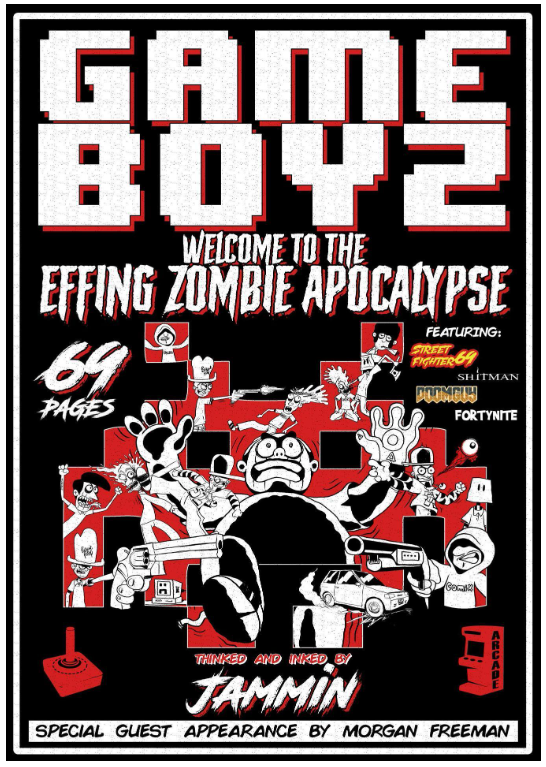 Order the comic on Amazon here!

Benjamin Wigmore: Welcome to the world of Game Boyz… Seven idiots who work in a video-game store where absolutely anything can happen. Sixty-nine digital comic book pages crammed with cartoon violence, bad language, zombie gore and video-game parodies (Street Fighter, Hitman, Doom and Fortnite). With a special guest appearance from Morgan Freeman this highly offensive gang of nerds will deal with a zombie apocalypse in a very uniquely geeky way. 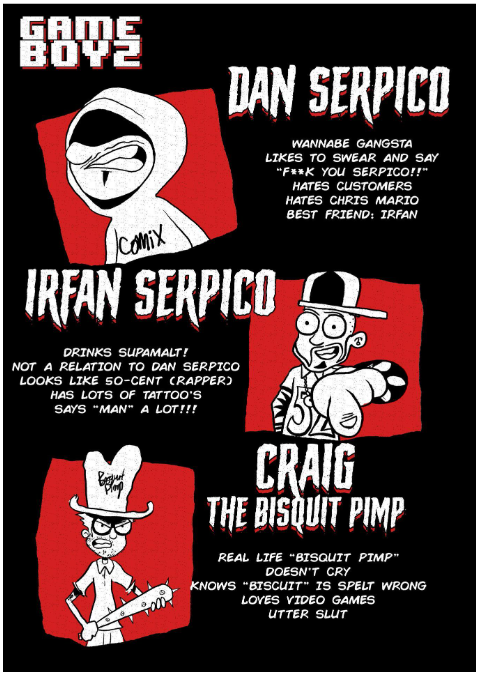 CB: How did you come up with this concept?

CB: Who is this comic suited for, or who is it aimed at?

BW: Game Boyz is definitely for gamers or people who grew up with video games. I’ve come up with short parody comics of video games that I have played. There’s Street Fighter, Hitman, Doom and Fortnite. It’s fun to write these smaller comics and include them in the Game Boyz story similar to what I did in the cartoons back in 2004. 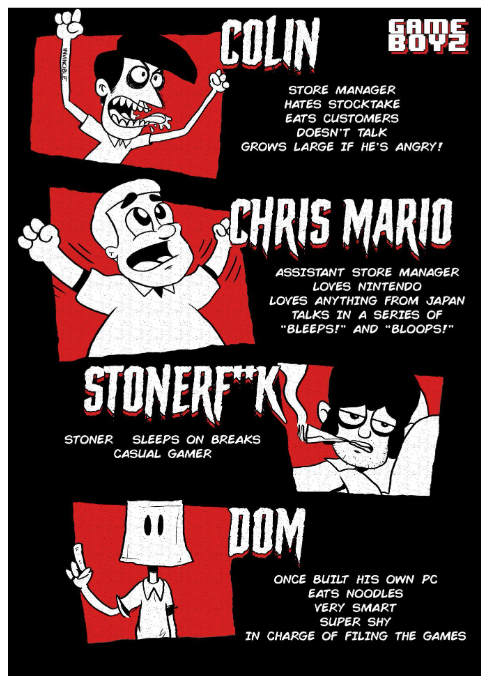 CB: You have a unique art style. Tell me how you developed this style?

BW: I went for a completely black and white cartoon comic style. The only other colours that appear are red and green. I would design the comic in thumbnails and then ink the final image all in photoshop. This is my 5th self published comic and the first to hit 69 pages. The whole process took about 4 months and I’m really happy with the result. 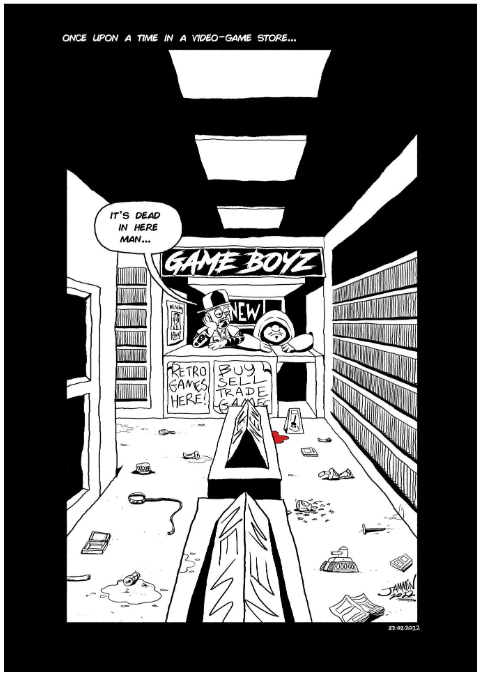 CB: You’re doing this as a one-man band, so what’s your production workflow like?

BW: Any spare time I had I was working on this comic. A page a day is a really good pace to try and keep up. I’d written and storyboarded everything which made it easier when I finally got a chance to sit down and draw it.

CB: This isn’t your first self-published comic. Tell me what you’ve been learning from all this.

BW: It’s a harsh world and there’s so much amazing stuff out there. This is my 5th amazon self published book and I’ve realized I’m more a cartoonist than anything else to I’d like to concentrate on that. 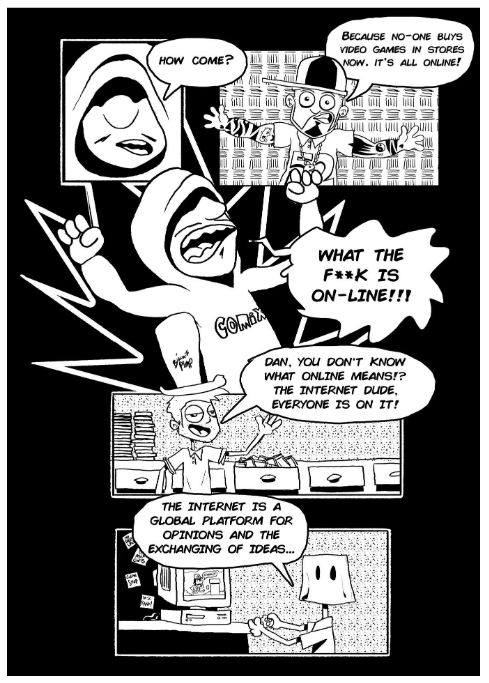 CB: So do you have more plans beyond this book? More stories to tell?

BW: I’ve got a few more ideas… I like the idea of building something up gradually. Like a comic strip that eventually becomes a comic or something like that.

BW: I would like to big-up this indie comics showcase. Ever since you featured me during lockdown I’ve kept coming to check out the site and it gets better and better.

CB: Thanks Ben. All the best to you with your latest comic.

Order the comic on Amazon here! 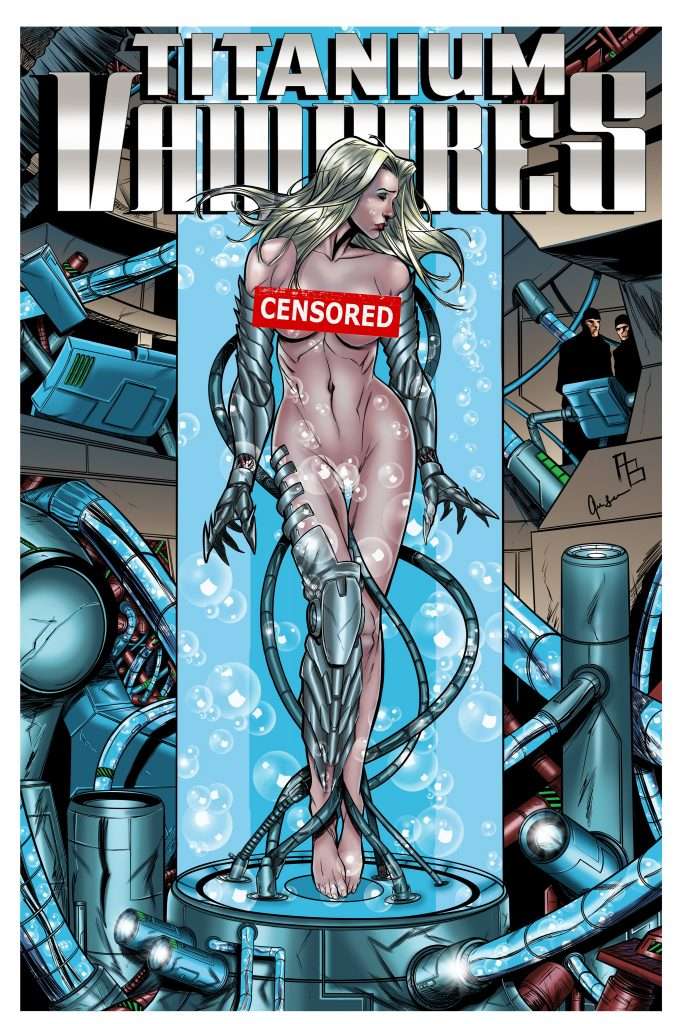 GeriLou: The United States government is creating living weapons in the Canadian wilderness outside of Alberta, not so much “living”, but rather Unliving. In all their wisdom,  the great minds of science and military decided to create the ultimate army using vampires as the base creature to build upon.  What!?!  Vampires!?! Really!?!  Let’s think about this.  Do you really think a vampire can be trusted with more power? Do you think they can be controlled? General Fargas believes he can make a soldier out of anyone or anything.  He is about to find out how very wrong he is.

Titanium Vampires the latest ongoing comic book  series created and written by Shannon Smith, with art by Andrey Luntik and colored by me, GeriLou. 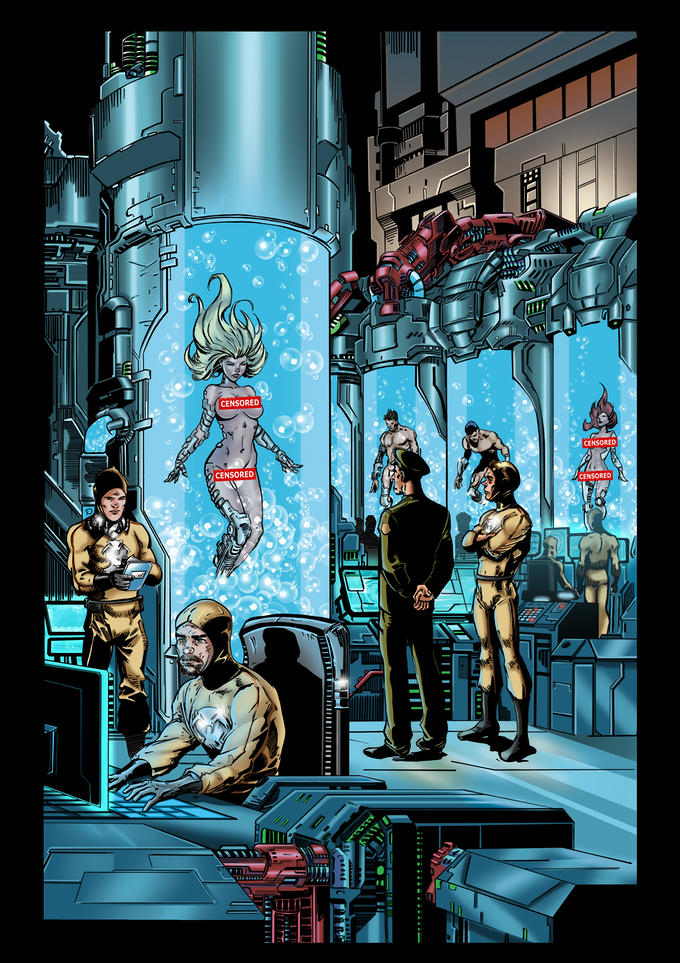 CB: Sounds intriguing. What made your team decide to self-publish it?

GL: Shannon chooses to self publish is because he wants the freedom to create what he loves without restrictions. He and David Furr own their own independent publishing company named ” Blue Inferno Comics” who publish and distribute the comics.

CB: So who is the ideal comic reader for Titanium Vampires, and who is it aimed at?

GL: This comic contains adult themes and is catering towards a teen 14 and up audience. This comic is also for those that loves horror, the supernatural and mystery with a military twist. Horror and mystery lovers will enjoy this very much. 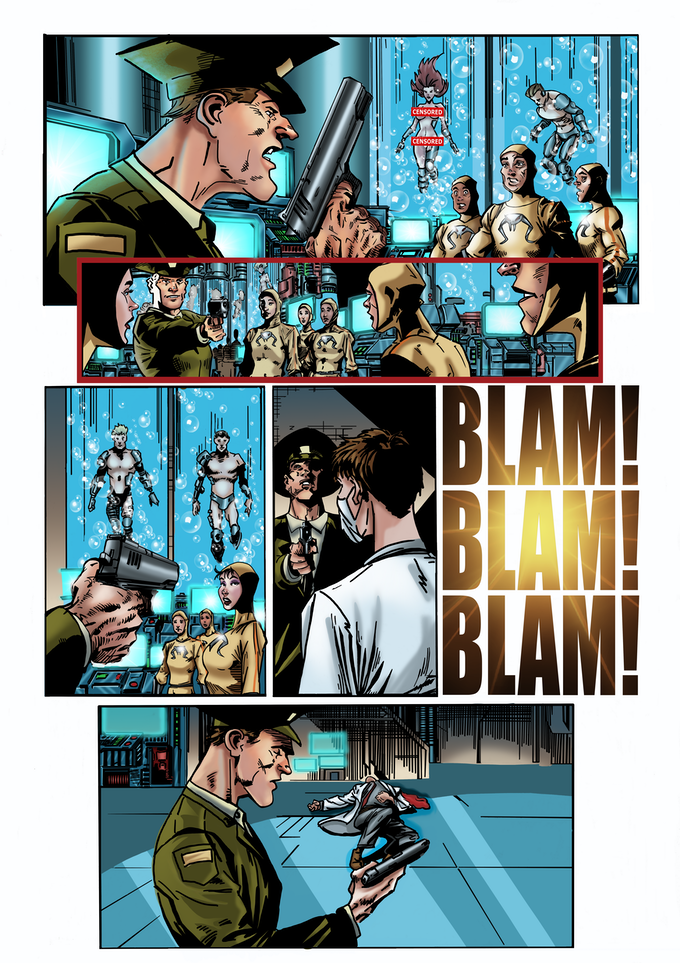 CB: Tell us about the creative team on this book.

GL: I am the colorist and character designer. While I can color in all genre styles. This comic is in the more realistic painterly style with a Sci-fi feel. 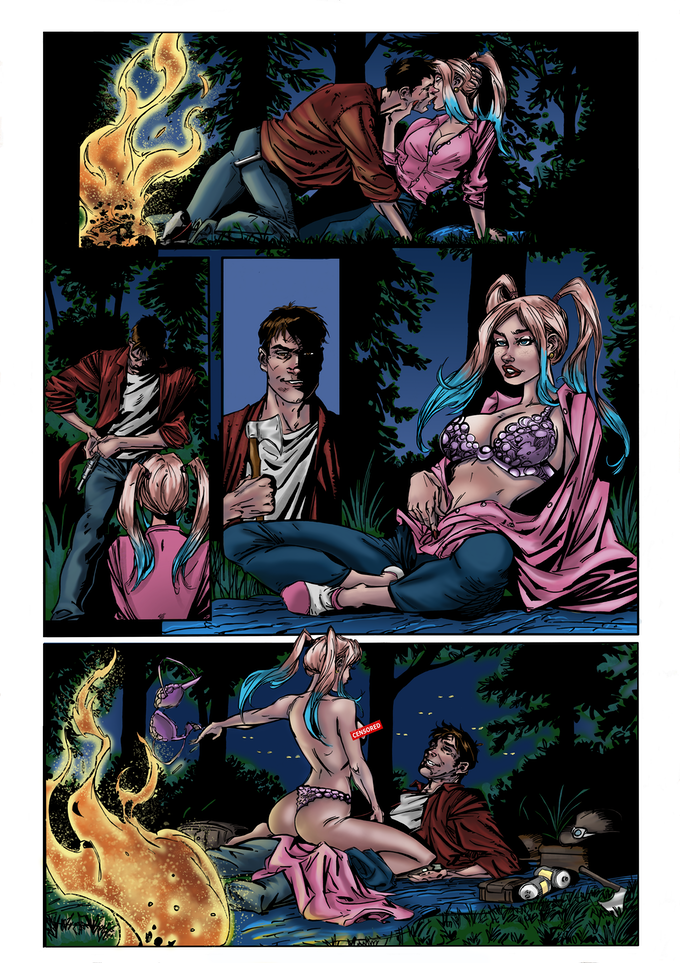 The story was created and written by Shannon Smith, who is also the creator of Frontier Graveyard, Knox County, Mobster Graveyard, worked with Thrilling Comics, Public Domain. The artwork by Andrey Luntik, who is also an artist on far too many other comics to name. And in addition to handling colors here, I am also the artist and colorist of Portalhunters 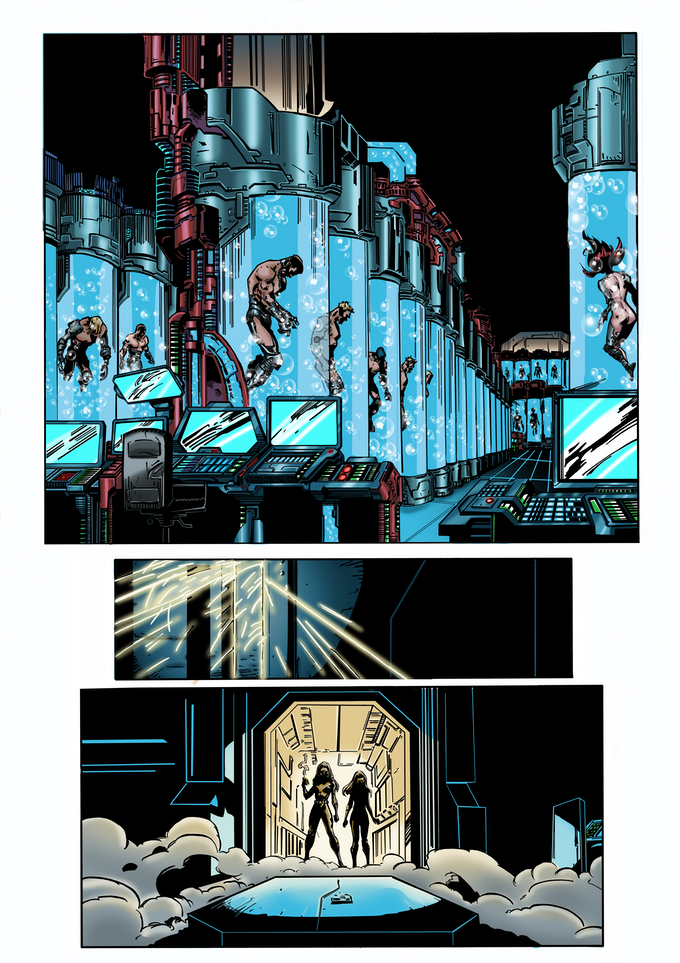 CB: How far along is the book? Is it ready to go to print?

GL: Titanium Vampires is 75% done, the other books offered in this campaign is 100% completed and will be ready to ship.

CB: Great! What is the biggest lesson you’ve learned from self-publishing through this process?

GL: Self-publishing is a lengthy process but very satisfying, knowing that your creation is finally available to the masses., While most of the comics that I’m involved with are being published without crowdfunding, those that are, are like in a test run. They crowdfund them to see if the comic people would be interested in that comic and if it does well, I believe they feel they have a hit on their hands. 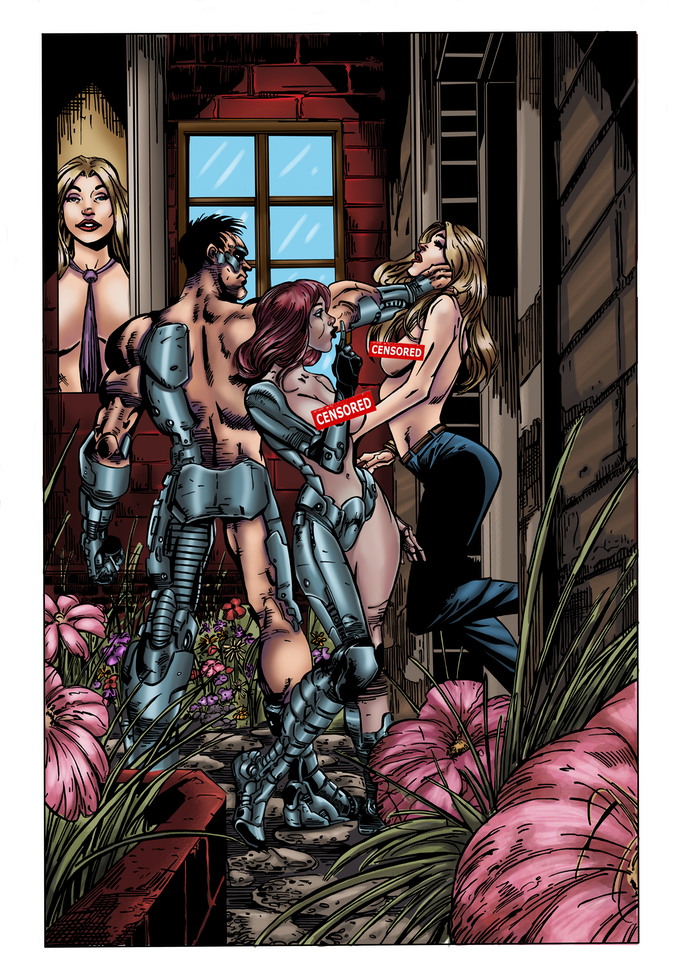 CB: What’s next after crowdfunding this book?

GL: Complete the series run of three comics in this series, and then maybe finding a publisher to publish it. Maybe even turning it in a graphic novel. 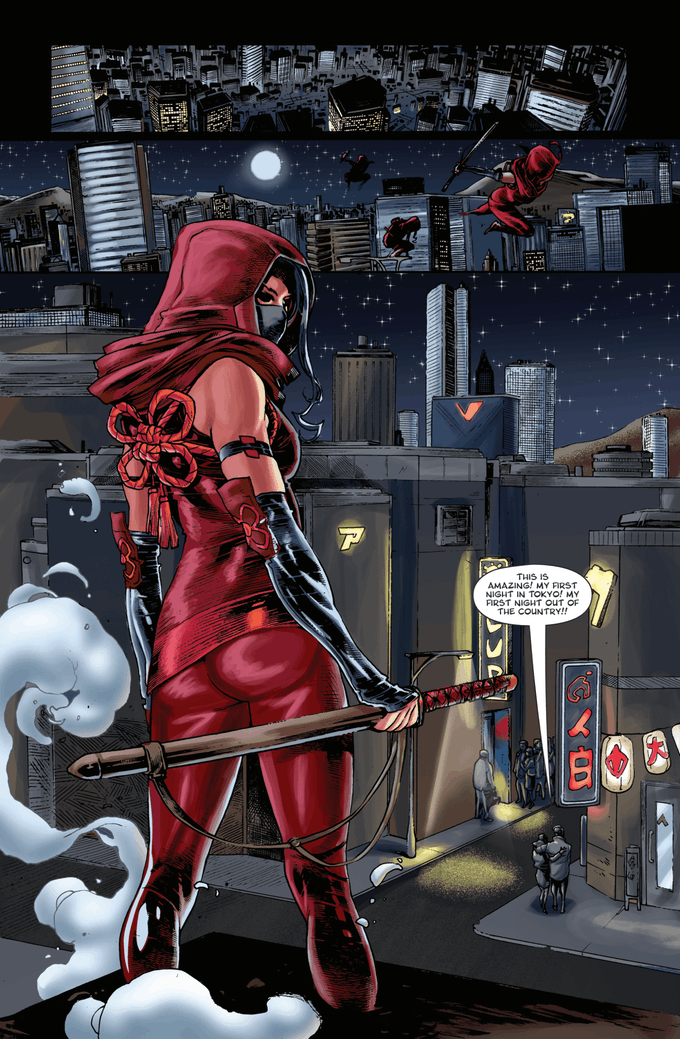 GL: I am not just the colorist of Titanium Vampires but of many other comics with many publishing companies, like Blue Inferno Comics, Antarctic Press, Heavy Metal, Hyperverse Comics and many more. I’m also a comic cover artist and character designer.

Readers may be interested to learn that this Titanium Vampires comic also includes an eight page ongoing story of Kronar the Barbarian Out of Time, which will be included with all series of this comic. 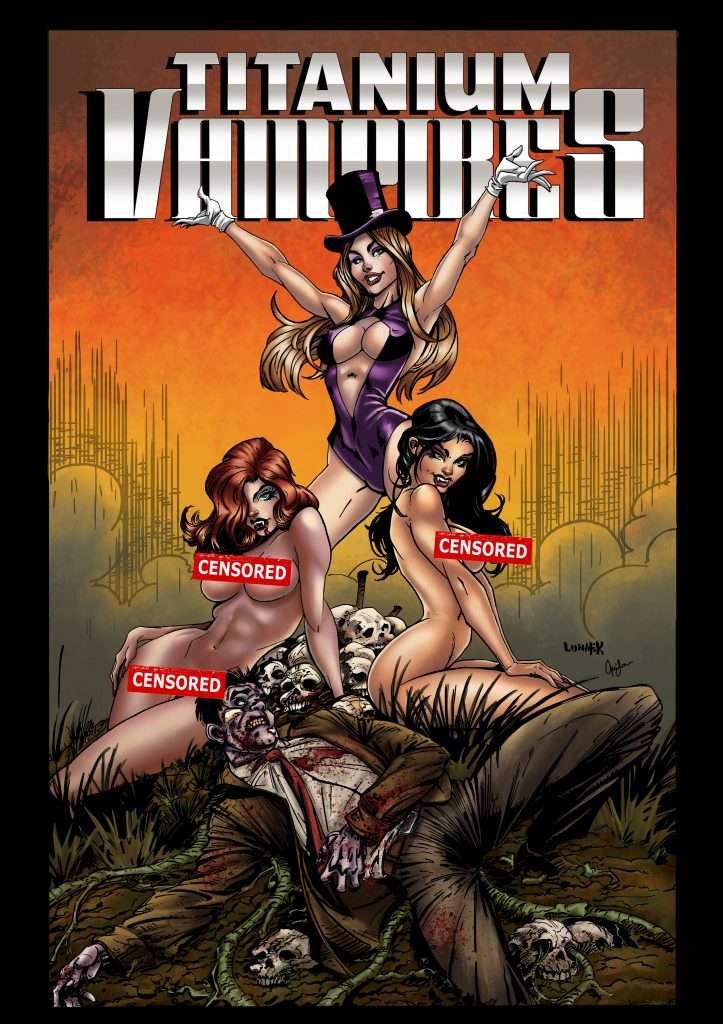