The Edge
by Marvin Wynn 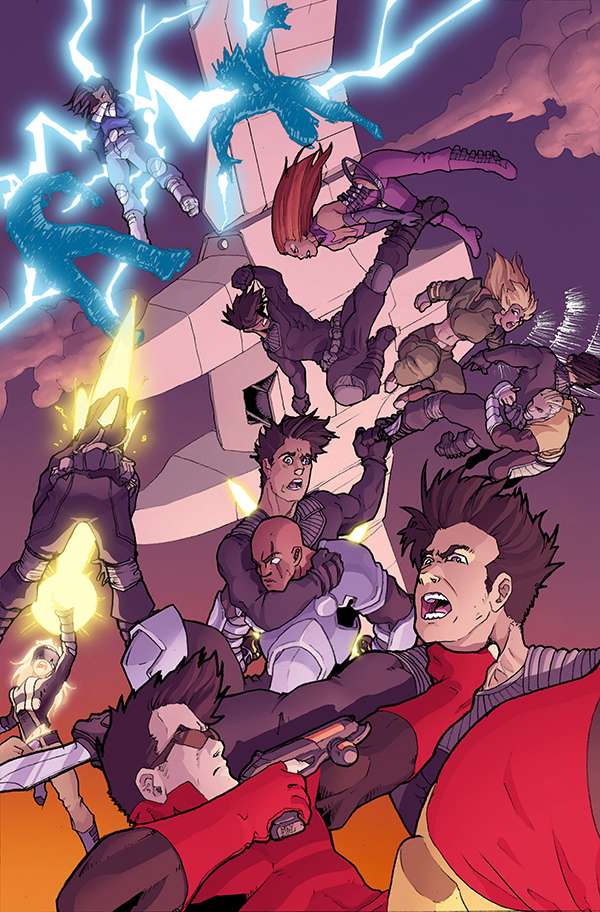 Chris Braly: Welcome to Indie Comics Showcase, Marvin! What’s the elevator pitch for your The Edge?

Marvin Wynn: The Edge is a drug that can grant special abilities, yet can cost you your life and or your sanity. We have complete 12 issues of the book so far, covering multiple arcs. 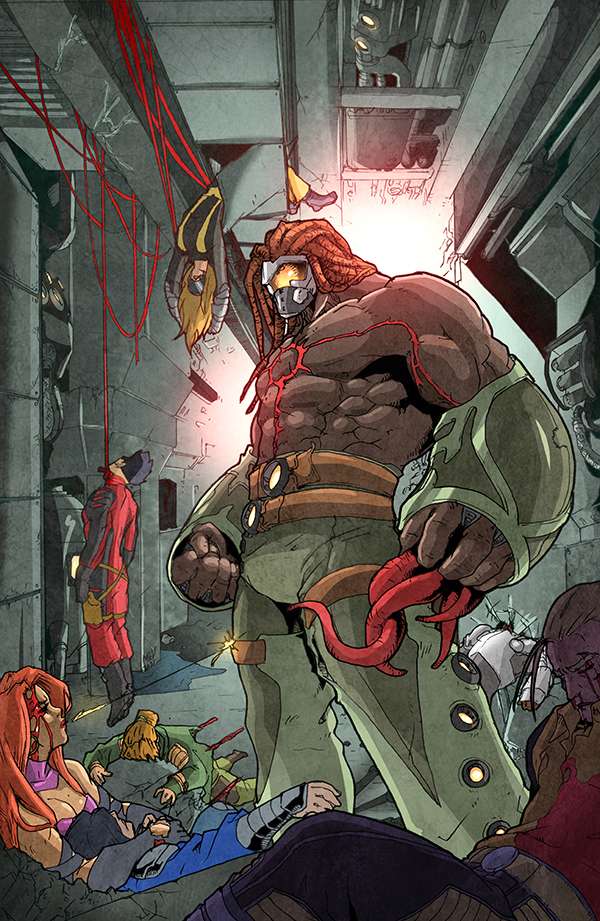 CB: So where did the idea for this comic come from, and made you decide to self-publish your own comics?

MW: I started back in the 80’s reading and watching G.I. Joe then moved on to Justice League, Avengers and X-Men. My wanting to create comics started when the Image Comics boom started in the 90’s. 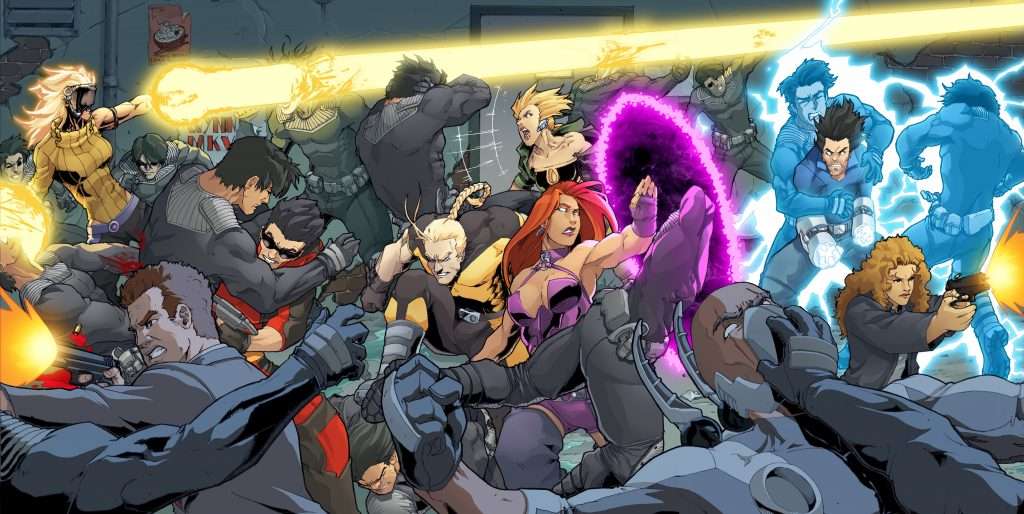 MW: All fans of comics from the 90’s X-men, WildCats, Stormwatch, and Cyberforce.

CB: Introduce us to your creative team.

MW: I’m from Pittsburgh, PA, and I began crafting the story of The Edge back in 1992. The story went through multiple iterations and story changes before I started work with “Mark V”. It was then that the story settled into what it is today. I’m an avid gamer and Uncharted is my favorite video game series. I do longform storytelling. Setting things up that will have major pay off later. 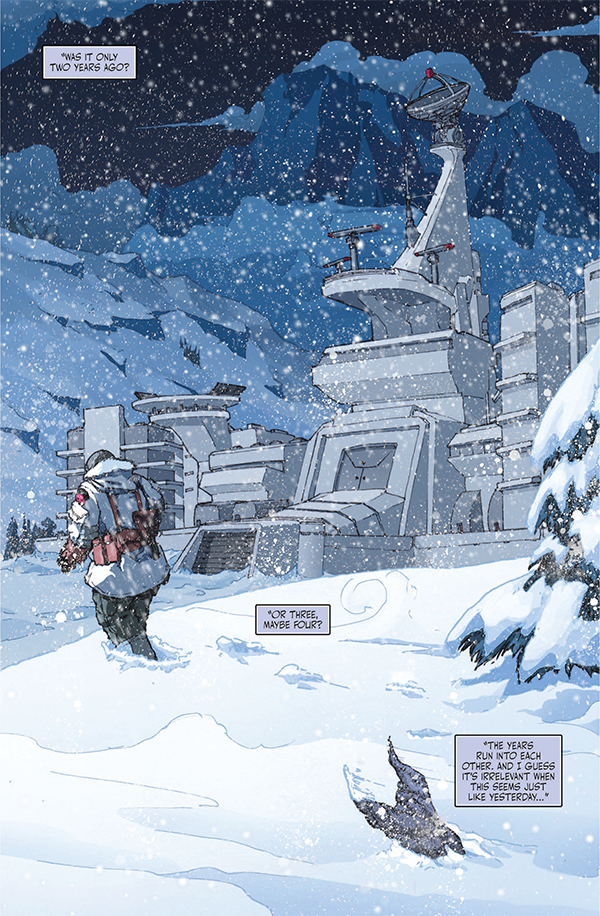 Mark Louie Vuycankiat (“Mark V”)Is from the Philippines and is the primary artist and inker of The Edge. Mark has multiple credits going back into the 90’s Jaymes Reed is the letterer of The Edge, and he’s lettered comics for many publishers, most notably Aspen, Avatar Press, Boundless, Calibre, Image & Scout. Never ever even once for DC/Marvel.

Luis Antonio Delgado is a comic book artist and colorist for the fan favorite series, Ghostbusters and The Last Ronin. Through the years he has worked on properties such as Ghostbusters, TMNT, Spider-Man, Batman, Superman, Star Wars, Transformers, My Little Pony, GI JOE, Archie, Sonic, Back to the Future and more.” And our colorist is King Bola is from the Philippines. King started working as a comic colorist in 2005. Another on of our artists is Steven Lisefski, and he’s all the way from New Jersey! 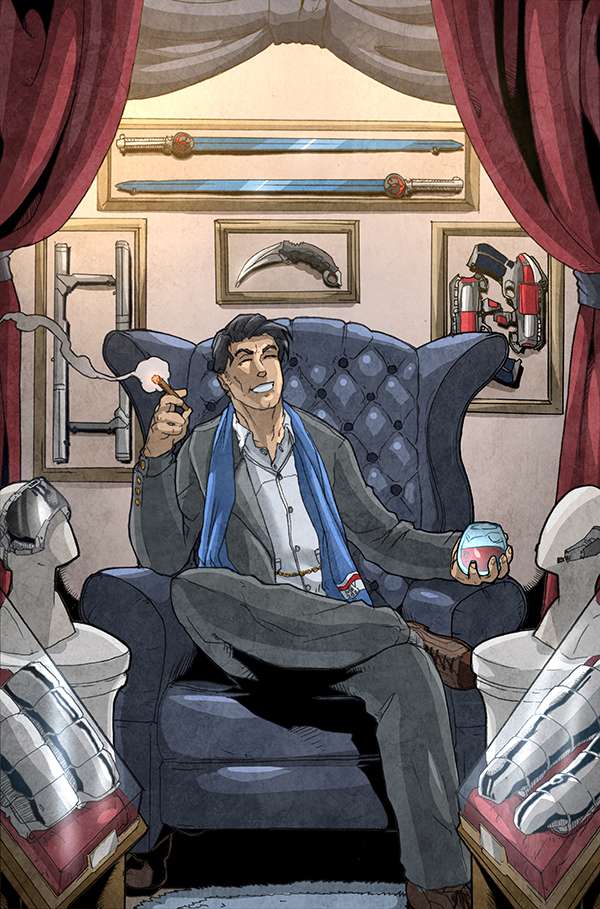 CB: This seems like a pretty big project. What are you learning through creating this series?

MW: I have been working on this book since 2007 and have learned a lot over the years. I want to help other creators to get over some of the humps that I ran into along the way. 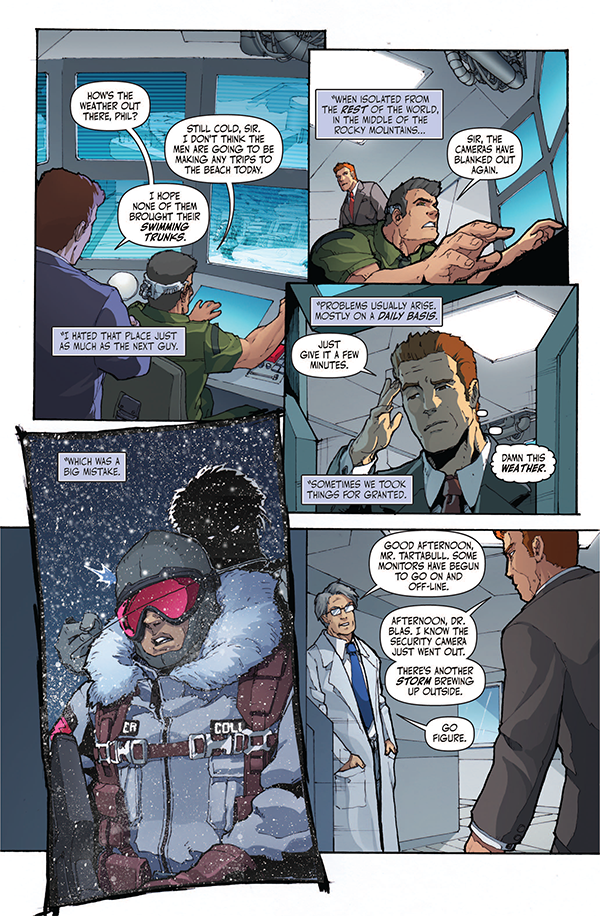 CB: It looks great, Marvin. Before we wrap up, are there more stories to tell beyond this project?

MW: There is a lot of things coming down the pipe for the book, and our ComicsBurgh brand. We are currently working on a series called From Script to Store. It will be about the journey from concept to marketing a book.

Check out the campaign page for The Edge here! 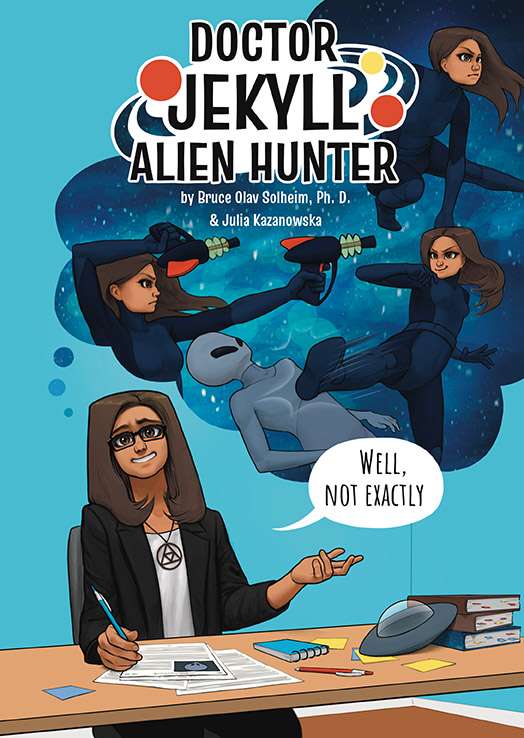 Check out the comic here

Chris: Welcome to Indie Comics Showcase, Dr. Solheim. What can you tell me about Dr. Jekyll Alien Hunter?
Bruce Olav Solheim: Dr. Jekyll Alien Hunter chronicles the adventures of Professor Henna Jekyll, perhaps the first female person of color lead character in comics who is not a superhero. Henna follows in her father’s footsteps as an academic researcher focused on extraterrestrials. Her adventures in search of aliens takes her to exotic locations around the world where she meets many unique characters. She has no superpowers, but she is super smart, and tenacious. She is helped by a mysterious amulet she received from her father and her intuitive cat, Stanley. The comic book is for all ages. 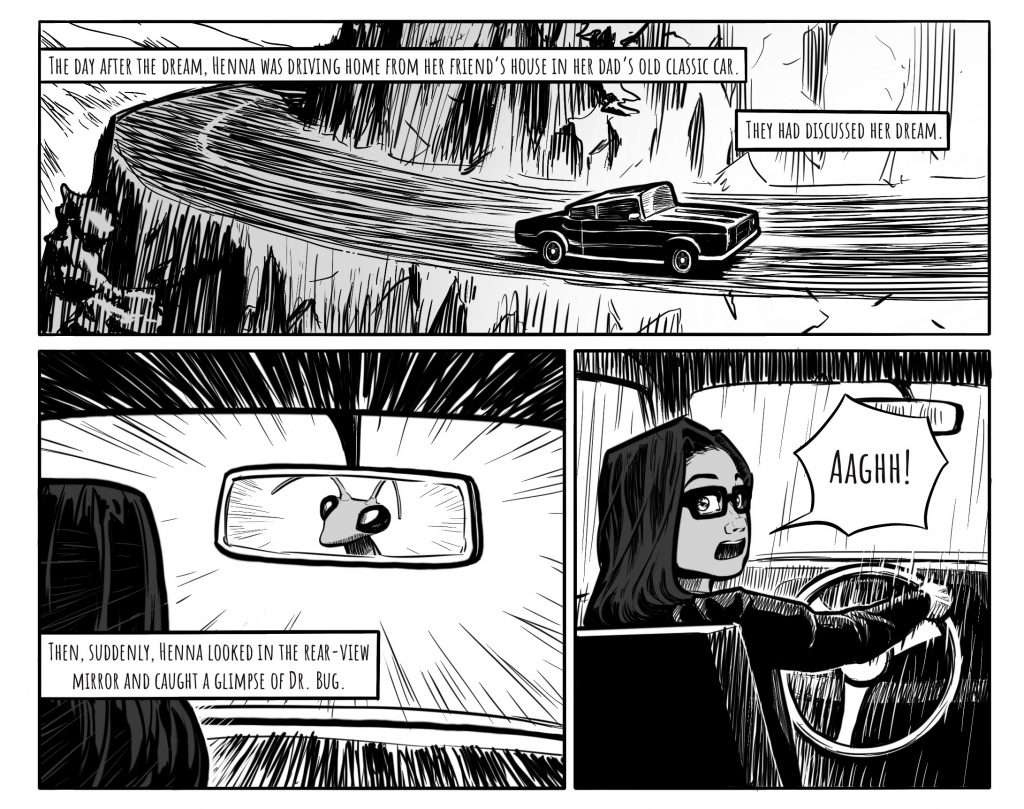 CB: Where did the idea for this comic come from, and made you decide to self-publish it? —

BS: Dr. Jekyll was a character I developed in my other comic book series, Snarc. I am publishing this comic because it is almost impossible to get the attention of comic book publishers and because I have successfully self-published before.

CB: So what kind of comic readers is this suited for?

BS: Dr, Jekyll Alien Hunter is for all ages. Young women will love to read about a strong female character in comics. 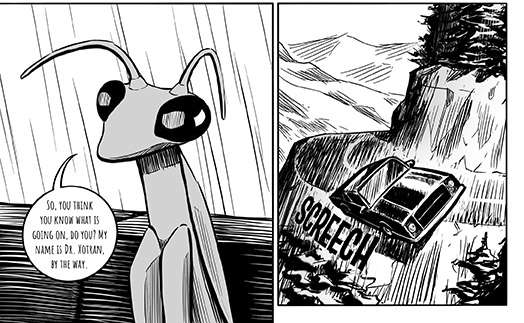 CB: Give us some insights into your creative process.

BS: I love combining science fiction, fantasy, humor, history, and an exploration of social issues in comics. I have taught college level history for the past 32 years. I learned to read because of comics and to quote the late Harvey Pekar: “You can do anything with words and pictures.” 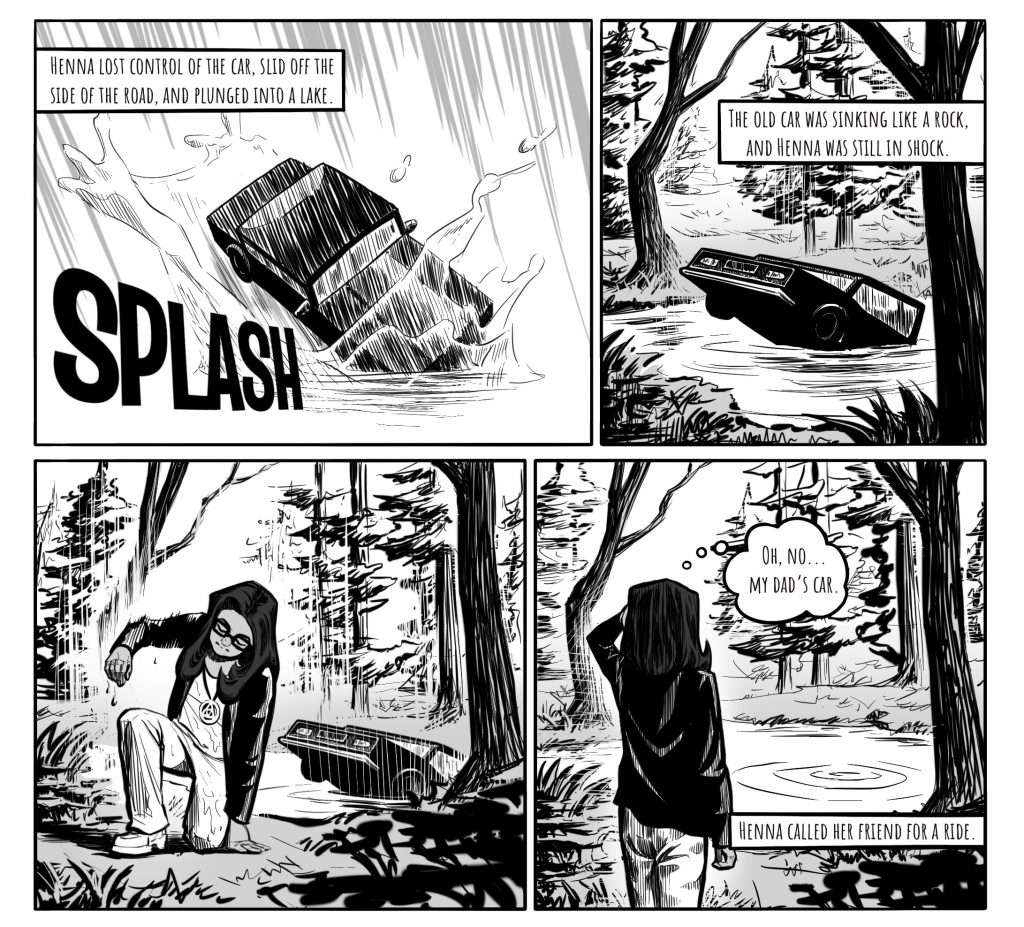 CB: What can you share about who helped bring this project to life?

BS: Julia Kazanowska is our illustrator. She is a young woman who lives in Krakow, Poland. Her style perfectly fits this character. George Verongos is my editor and has worked with me on the Snarc comic series and other books that I have published. And I write and create storyboards for comics nearly every day. 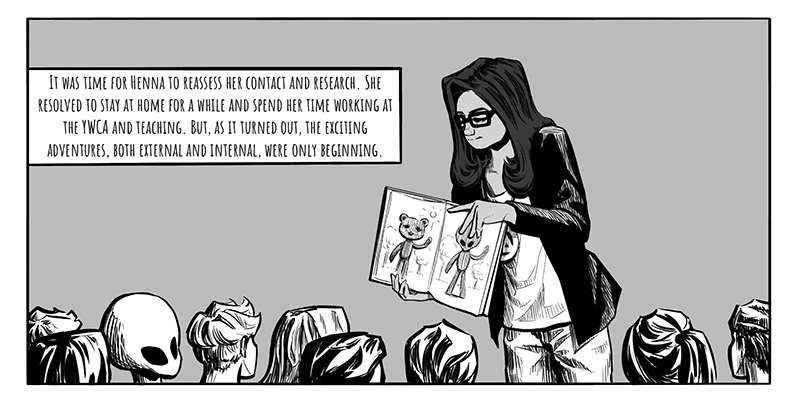 CB: So what is your takeaway from this experience in self-publishing?

BS: Self-publishing gives you freedom to create your vision without interference. 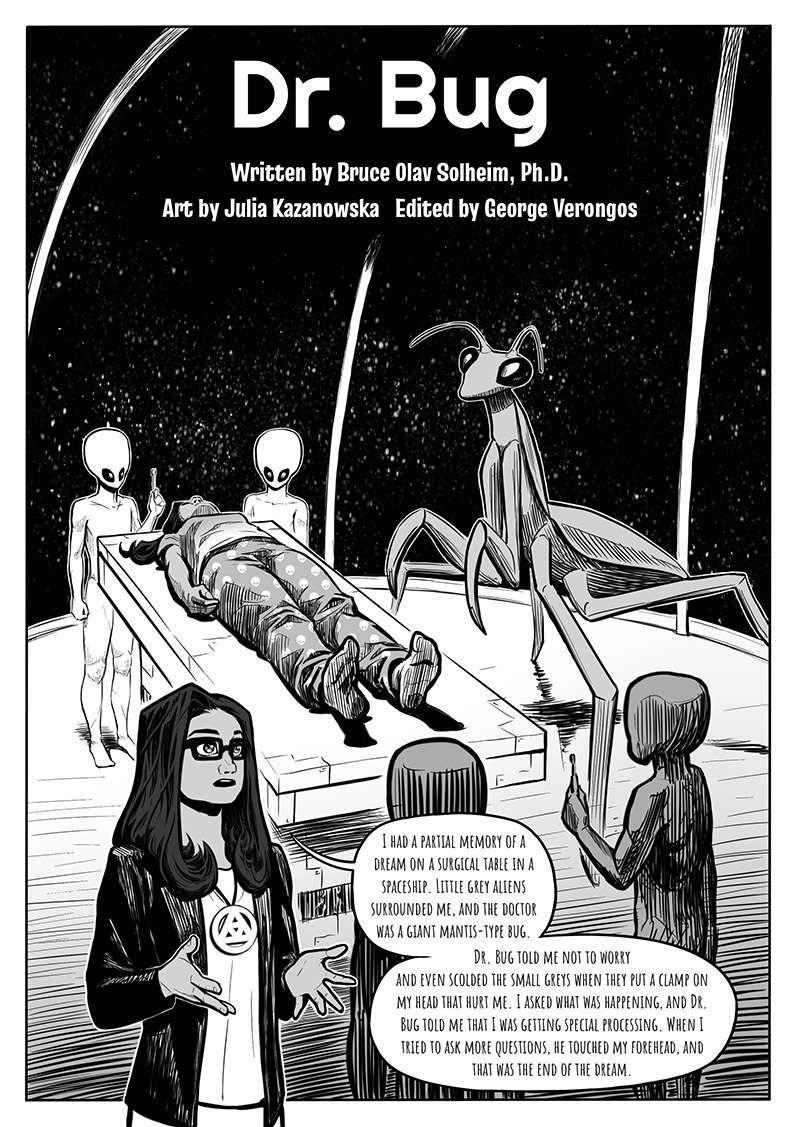 CB: This book is already published. What are some other stories you want to tell?

BS: Snarc #3 and a new comic book, Gig Line, and waiting in the wings. I have also started storyboarding Dr. Jekyll Alien Hunter #2. We have turned Snarc into an animated series and it is available to watch on YouTube. 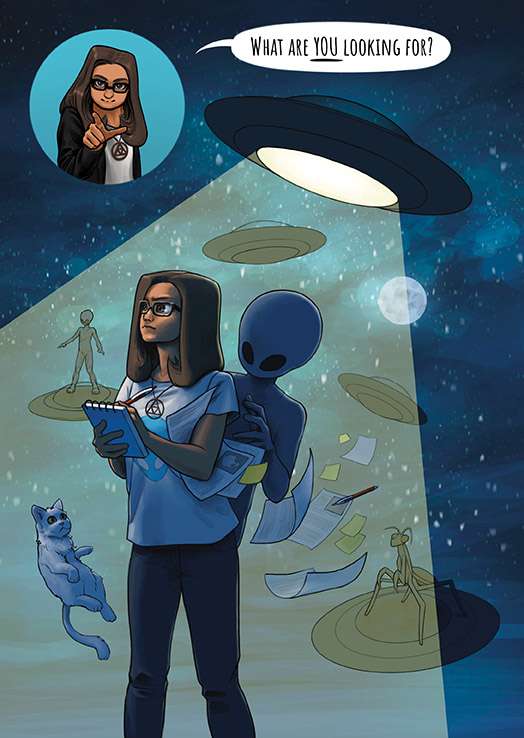 BS: I just want to say that Dr. Jekyll Alien Hunter is especially important for young women to read because there are not too many good role models out there in the world. Oh, and Henna Jekyll is an anagram of a very famous ufologist…

Land of the Rats
by Mark Nasso Pick up these comics here

Chris: Welcome to Indie Comics Showcase, Mark. What’s the story of Land of the Rats?

Mark Nasso: “Land of the Rats” tells the story of Jack Natari, a hybrid rat-human from the nation of Raelak and his adventures after being exiled from Rat City. Wandering deep into the desolate Vastness of Blask, Jack meets many friends and foes, encounters strange beings, and befriends the dragon Mephiliaxus who may hold the secret to Jack’s quest. 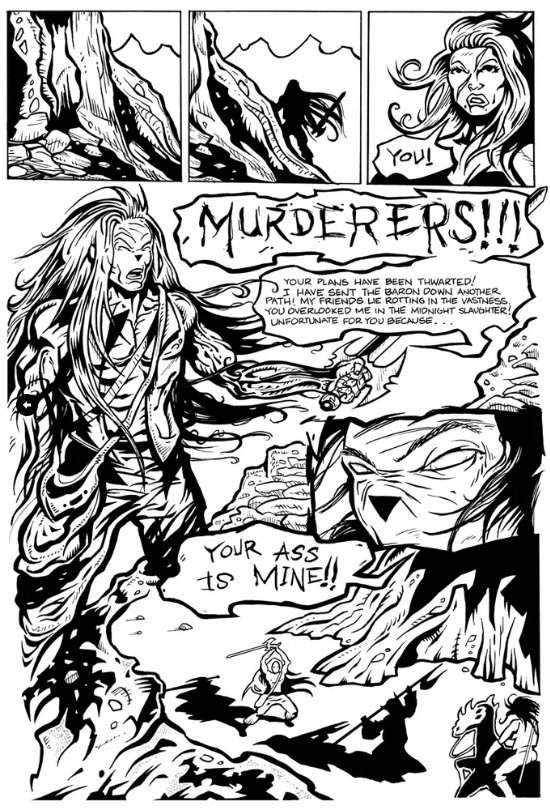 CB: How did you come up with the idea for this comic?

MN: The story has evolved over 20+ years. I am very much inspired by the black and white comics trends of the 1980s and the offbeat story possibilities that that genre provided. With that freedom, I have used Land of the Rats to explore ideas of religion, history, and mythology in a fun fantasy / sci-fi setting. 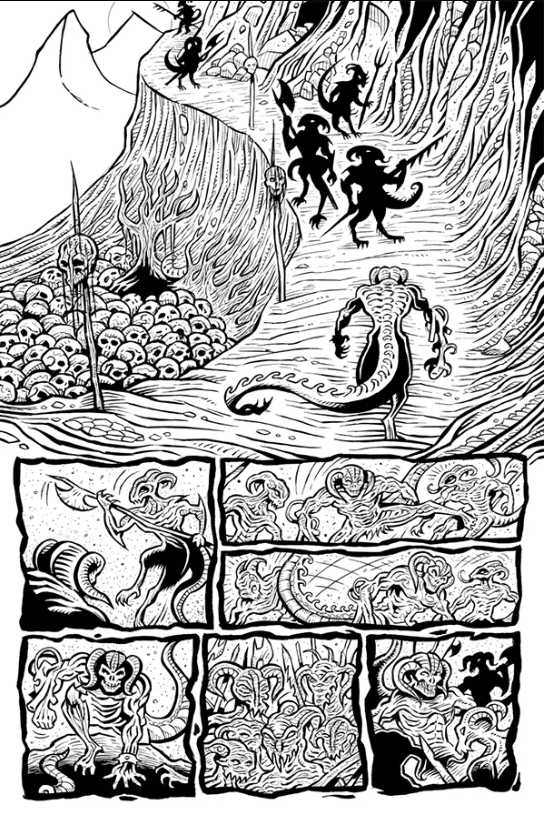 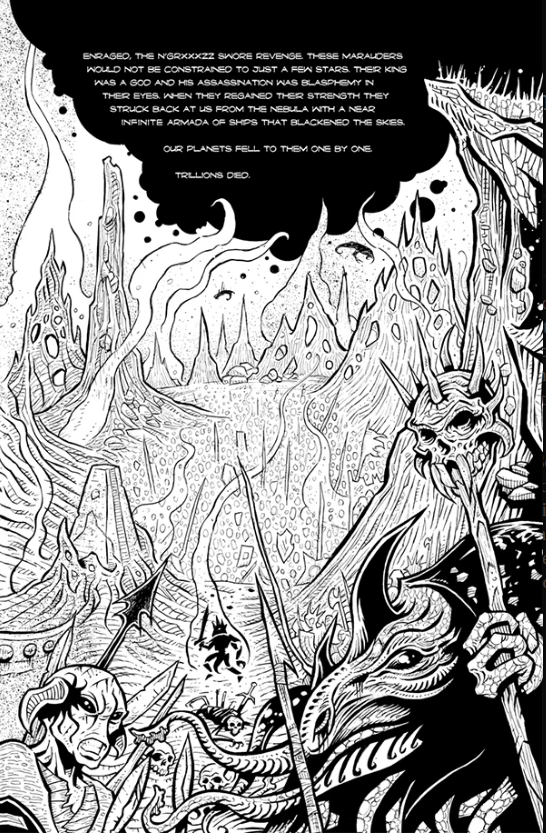 CB: You have a very distinct style. Can you tell me you developed your art style?

MN: Land of the Rats is drawn in a very aggressive and bold style. Thick, jagged, and fluctuating line weights drawn traditionally in ink on bristol board with brushes, markers, and pens.

I begin writing in Microsoft Word while simultaneously sketching out thumbnails and I synthesize the two together. Usually the story has three or four major keyframe moments and the goal is to nail these down and fill in the connecting pages to tie the story together. 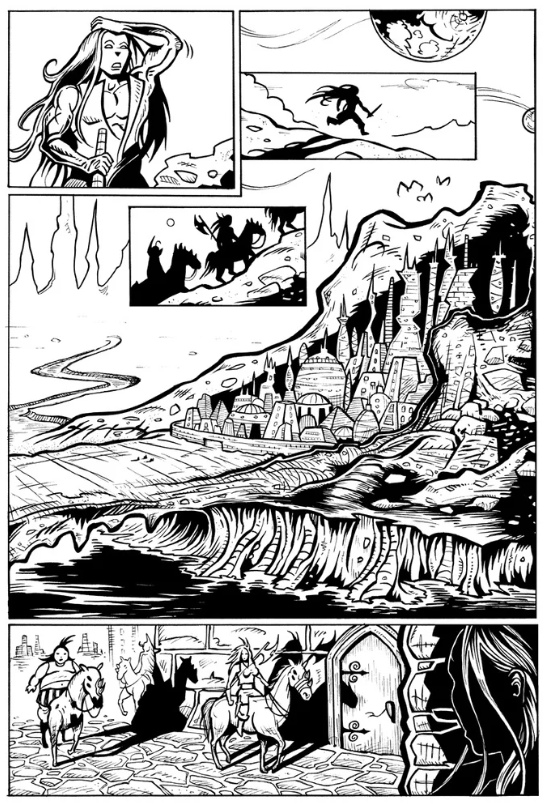 CB:- What are your plans beyond this book? Do you have more stories you want to tell?

MN: Land of the Rats is not numbered like standard comics but is instead told in chapter titles therefore there isn’t technically an issue 1. Because of this I pull readers towards “Land of the Rats: Gastrolithicus” as the unofficial starter issue since it’s simple, a self-contained story, and a good place to start. Of course there are subsequent issues and I plan on telling prequel stories that happen before Gastrolithicus. CB: Good luck with the books, Mark. Anything else you’d like to say about your indie comics before we conclude?

MN: Thanks. I am excited by the idea of self-publishing and having full control over my intellectual property in how it is created, printed, and distributed.

CB: Thank you, Mark. I wish you great success.

Land of the Rats: I am Soildweller

Pick up the Land of the Rats comics here