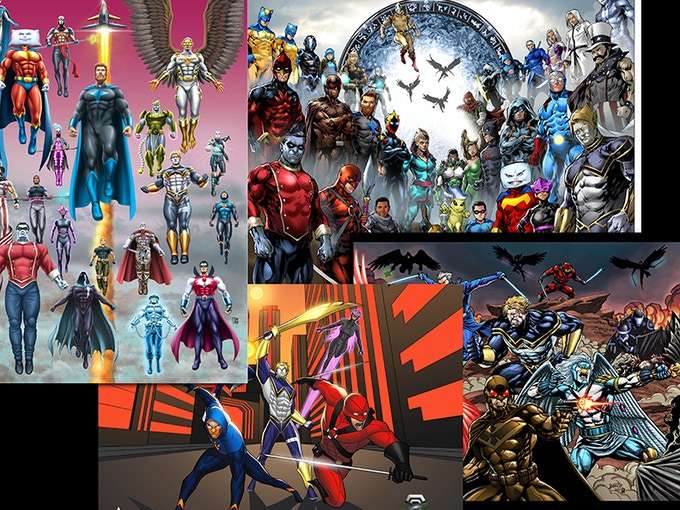 Check out the crowdfunding campaign here

Joe Spicer: Sure! It’s 5 NEW issues from Star Cross Comics, including Killer of Kings (An ancient warrior in a battle with corrupt kings) Ebon Guard (Hikage must save his master from the Realm of Synn), Star Cross Comics Presents (Standing in the Light featuring 5 stories), Welcome to Catharsis (A wonderer navigating through a bizarre land, and Dreamboat (A crew of misfits sailing through the waters of your dreams. 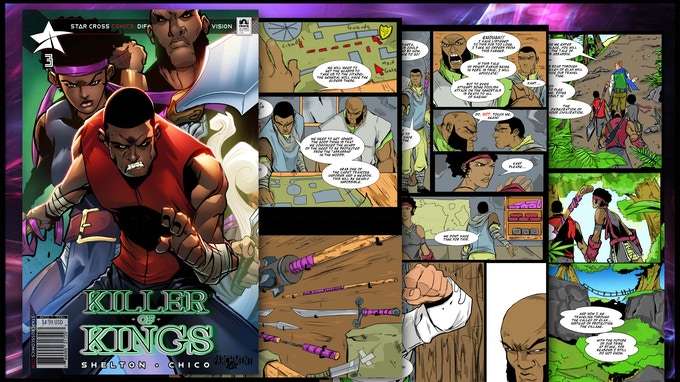 CB: Tell me where this project is currently. Why run it as a crowdfunder?

JS: These 5 new issues were at the printer and we wanted to get them into as many hands as we can and to drum up some support for funding future issues. 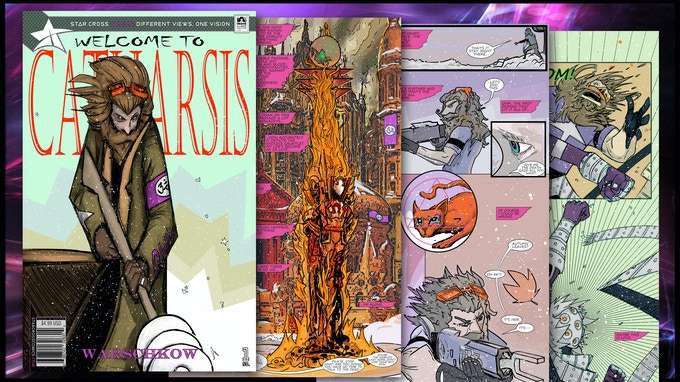 CB: I know Christianity informs a lot of the books from Star Cross. Tell me what kind of comic readers these titles are best suited for?

JS: Fans of fantasy, strange new worlds, action and adventure. Each creator has their own unique vision and passions. Much being the spiritual worlds and the dealings with other worlds. We all love the 90’s styles but we have our own take on very stylistic art and color that we see really stands out if a field of conformity. 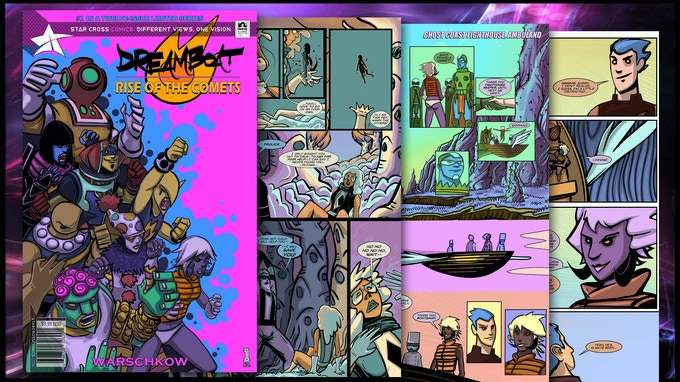 CB: Let’s talk about your creative teams. Who is on what?

JS: Dan Warschkow wrote and drew Welcome to Catharsis and Dreamboat and his style is his own, with radical colors and interesting characters to say the least. Radames Malave’ has a bright color scheme that shocks you to attention while violent underworld dwellers reach out to grab you. Gary Shelton Jr., who I think is heavily influenced by Joe Madureira, brings his own take on the Pre Flood world of the Book of Genesis. Those are just a few of the creators involved. Star Cross Comics Presents features even more talented creators all in one book! 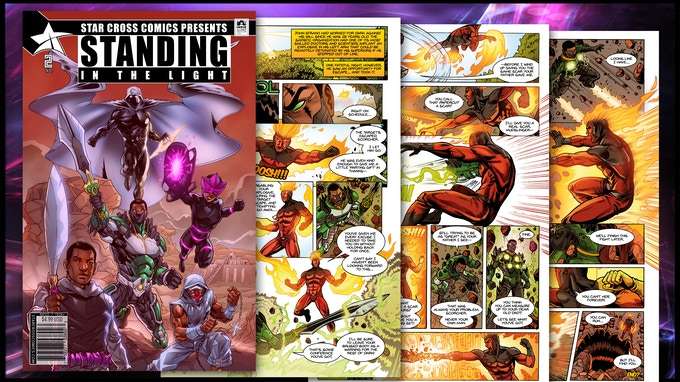 CB: What’s next after this crowdfunding project?

JS: These are continuing series and each link to many other titles we publish as well. We have our trading cards set and our Star Cross universe posters filled with our great characters. I just hope readers will continue to follow our new projects that are coming out constantly.

CB: Thanks Joe. Keep it going! 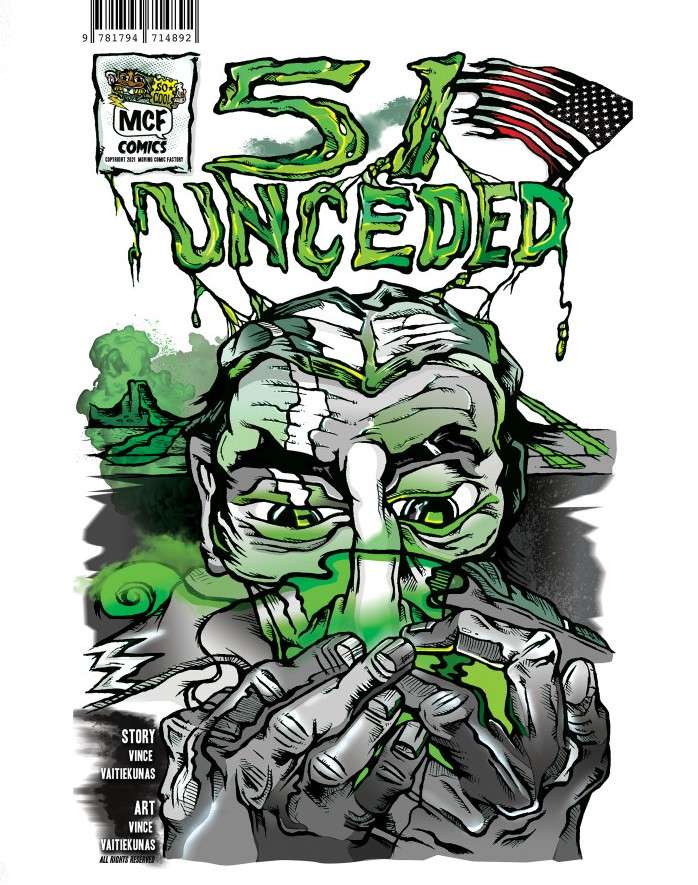 Grab a copy of this comic here!

Chris Braly: Welcome to Indie Comics Showcase, Vince. Tell me what 51 Unceded is about.

Vince Vaitiekunas: In the mysterious southern desert regions of Nevada, US Special Agent Tom Daniel is assigned to the ‘ETEP’ or Extra-Terrestrial Exploratory Program, seeking evidence of alien life on Earth. Agent Daniel thought evidence of alien life on American soil was never possible, until now. Ken Hoekkante, a local rancher and Tribal Elder, has been having dreams that are growing clearer as time goes by. What will happen next?! 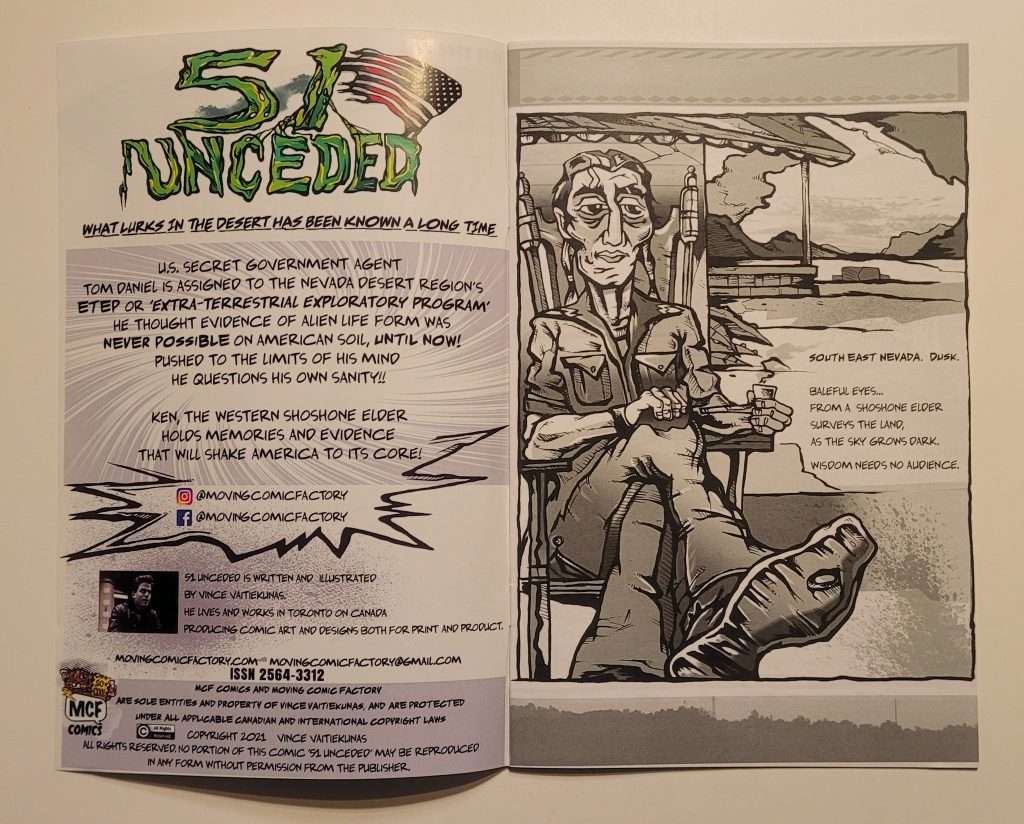 CB: Where did you come up with the idea for this comic?

VV: The emerging zeitgeist of our times is the change in the earth, humanities impact on it, as well as the legacy of history all collide together. The juxtoposition of the Native American, the aliens, and official U.S. government forces to deal with the threat are metaphors for where America is headed, her history, and the ‘outsider’ as a threat, or a blessing? The narrative is all about finding a future that will work. 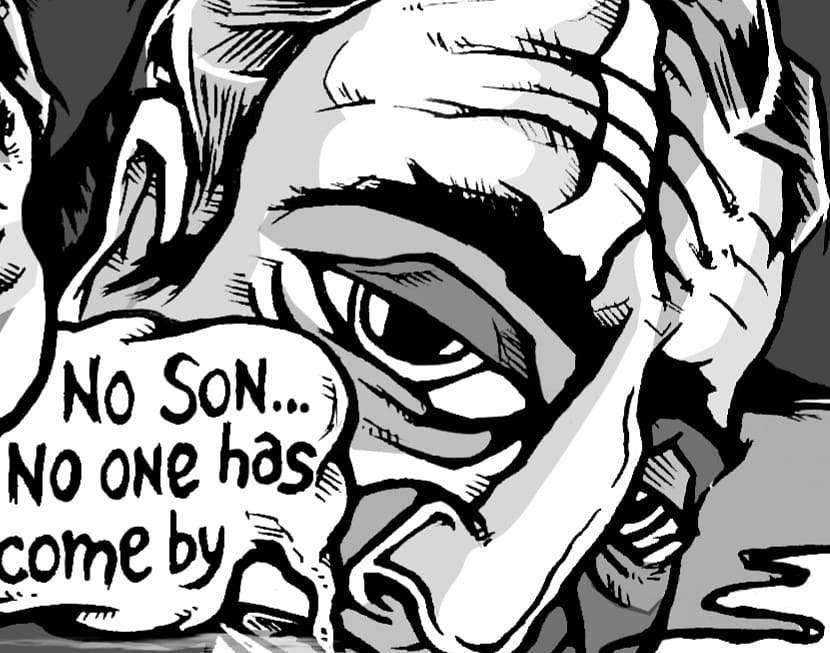 VV: Socially sarcastic savvy adults, disillusioned Liberals and everyone who agrees that we are in a collective mess! 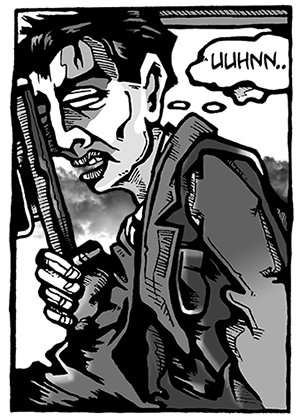 CB: Tell us about your style and creative process, and how you developed them — 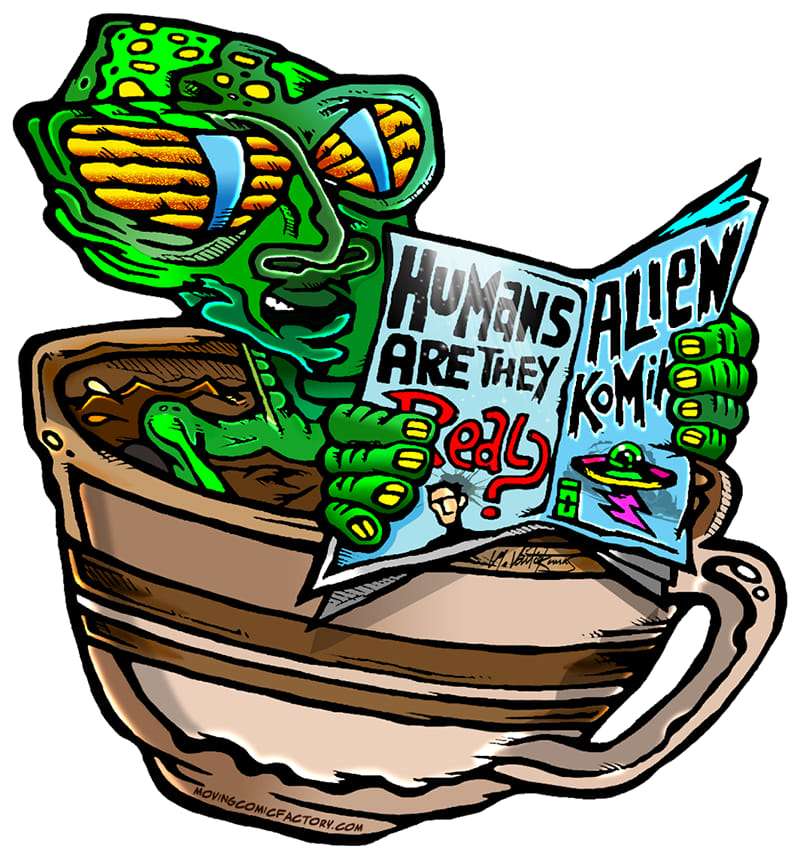 CB: Self-publishing isn’t easy. How are you distributing and selling the comic?

VV: Issue #1 is done, and available online through On Demand. As well, as a few direct retail stores in Canada & U.S. Search Poopsheet Foundation minimart for direct store as well. I jumped straight into just doing the first issue of the comic. Its an ISSN registered & copyrighted IP, so I’m in this for the long haul. Issue #2 due – end of May, 2022.  All the barriers to entry (printing, distribution) are gone for first timer comic creators. I believe creators must work very hard, to get to Issue #2, and also to pitching to next level publishers, or the Big Two, if its the superhero route as well. 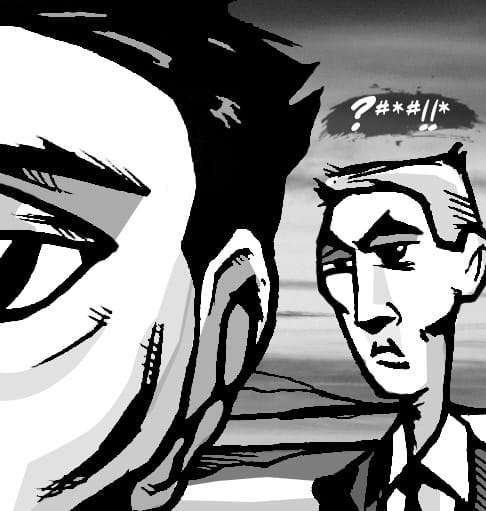 VV: Yup, I have a big graphic novel Magnus Opus project that I’ve been working on. 250 pgs easy. Black and white also. As well as animation projects and Blockchain stuff.

CB: Any last words before we wrap up, Vince?

VV: My intentions are to create edgy characters where their struggles, emotions, challenges within the story move the reader enough to care about them, good or bad. What else is there?

Grab a copy of this comic here!

Yiffing in Hell: (Not) Freak Squeal
by Pablo Rincón 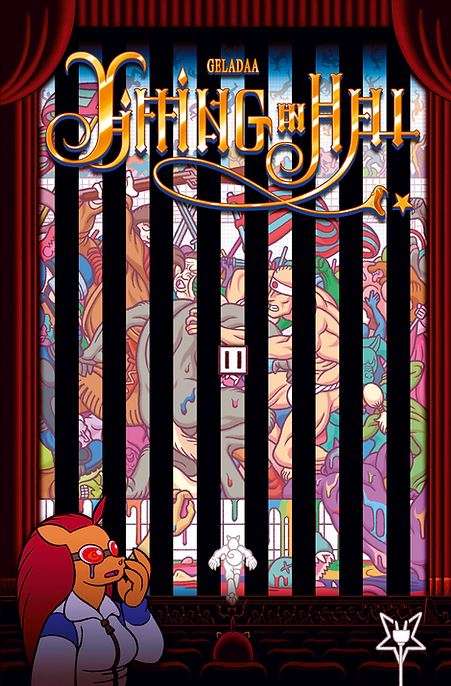 Get a copy of the book here!
Mature Readers

Chris Braly: Welcome to this edition of Indie Comics Showcase, Pablo. What can you tell me about your latest book?

Pablo Rincón: My comic (60 color pages) is about a machine goddess that, while investigating an ominous lead in the virtual dimension of her realm (a planet called LV-47), discovers a huge battle-royale among multiplying dream werewolves. Lovecraftian revelations ensue. It´s a comic built around the principle of “illustrating itself” like this: “the reader read the words, one by one, and thus reached the end of the sentence”

CB: Where did the idea for this comic come from, and what made you decide to self-publish?

PR: The comic is an attempt to create a visual machine that is as stimulating as possible, and reacts to the reader as he engages with it. I self-published it because I didn´t want to face any sort of censorship; the work is at times violent and conceptually ambitious. 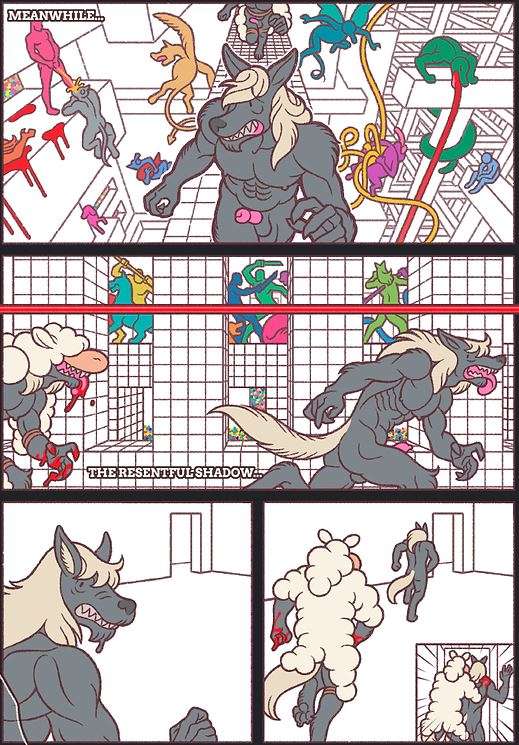 CB: Looks like something geared towards adults and furries. What sort of audience would you say it’s aimed at?

PR: Adults definitively, more so because of the complexity than the content really. It´s aimed that people that want more out of fiction, far more than mere “entertainment”. People that enjoy Criterion collection films, art such as the one produced by Takashi Murakami. It looks a bit like manga. 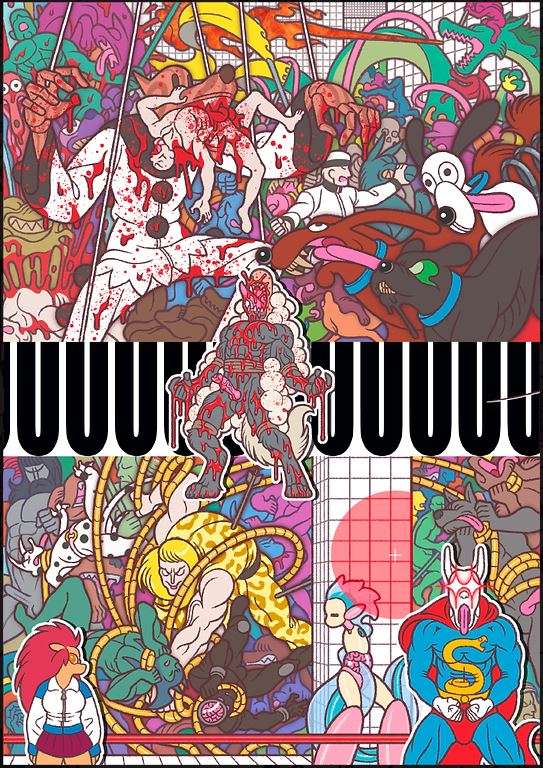 CB: Tell us about your style and creative process, and how you developed them —

PR: I went to art school for 3 years in France; I just worked on this non-stop for about 1/5 to 2 years. I build things to surprise myself, the most important thing is to do pictures that continue to teach me and show me things definitively. I work on the computer, a Cintiq tablet with Adobe Photoshop. I attempt to emulate somewhat the “ligne claire” style that Hergé developed in “TinTin” because I really value clean lines that illustrate clear thoughts. 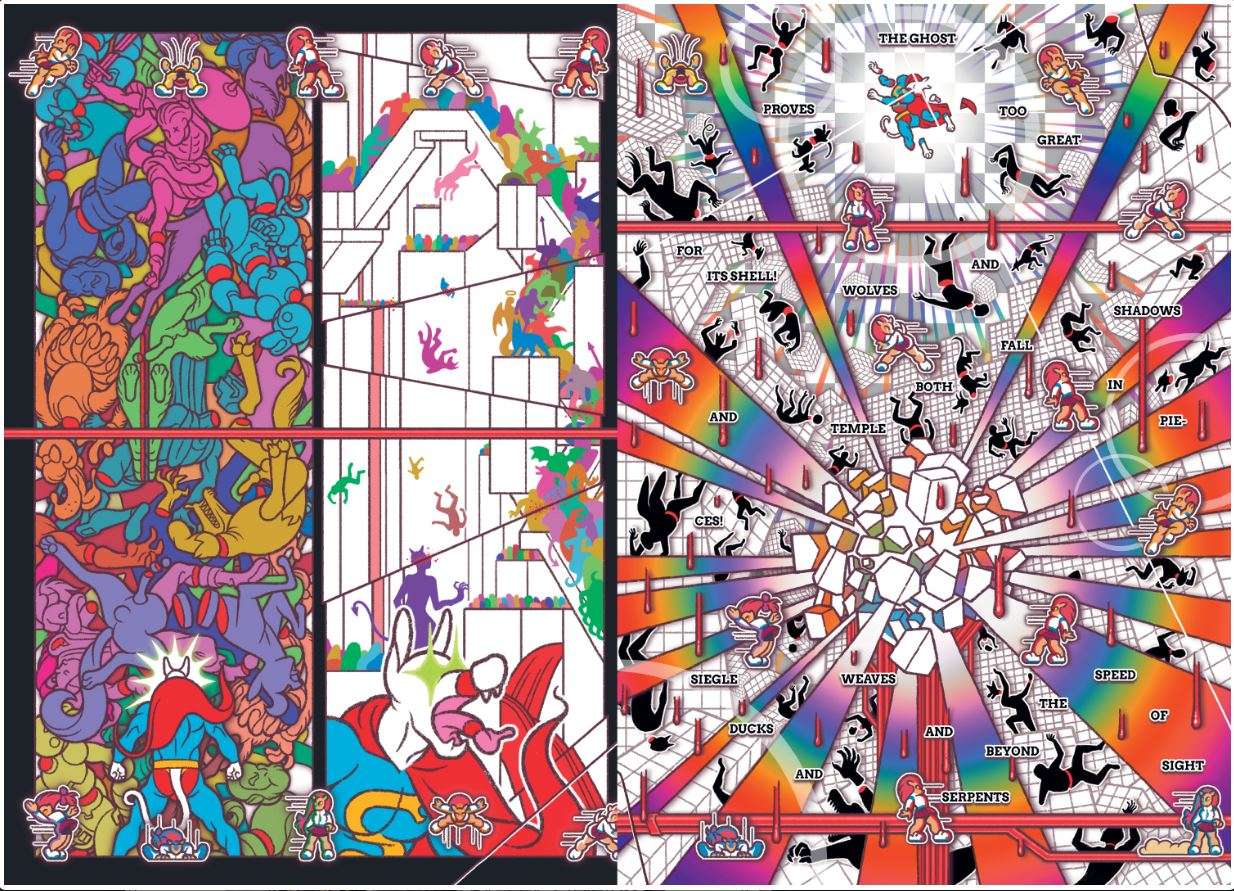 CB: You’re the writer, artist, and publisher. What are you learning from this process?

PR: To give an example, I have learned that there are few joys comparable to hearing a satisfied customer telling you via email that they “stayed up all night studying your book”. I have also learned a lot about ink percentages for printing and endless other technical things. I have learned I am terrible at “networking” 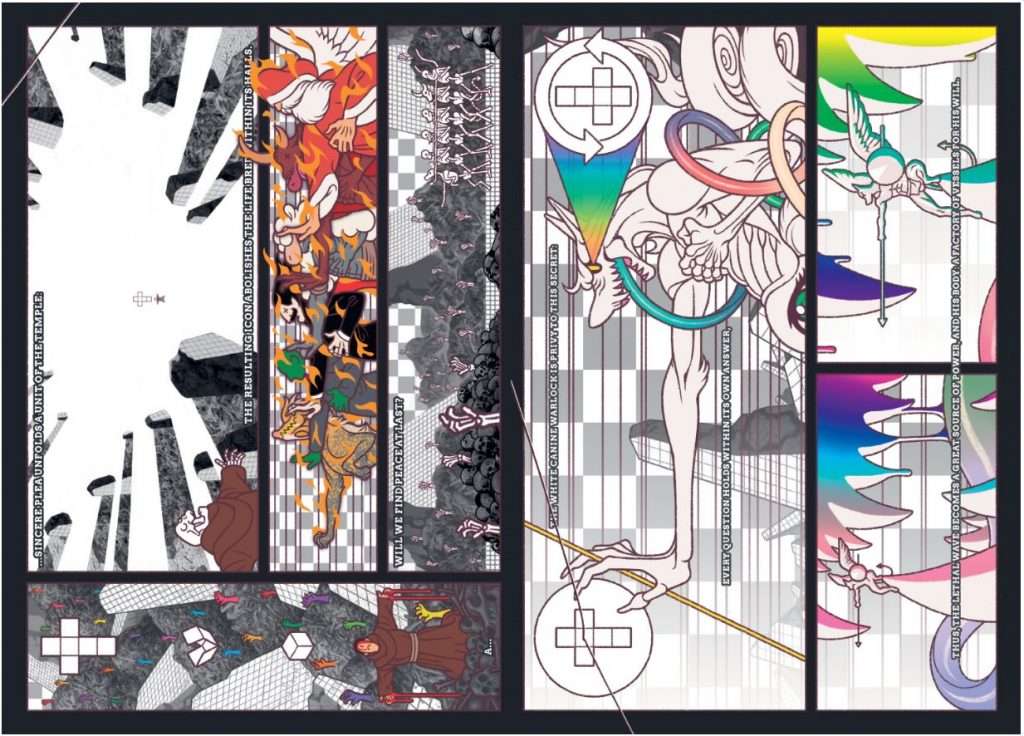 CB: Tell me about your plans beyond this book? Are there more stories to tell?

PR: The work is complete, I am working on another comic at the moment, I have a previous, much longer book as well available at my site also. I plant to continue to release stories set in the same universe as the one featured on my first two books, but I am also developing another fictional universe in my current work. 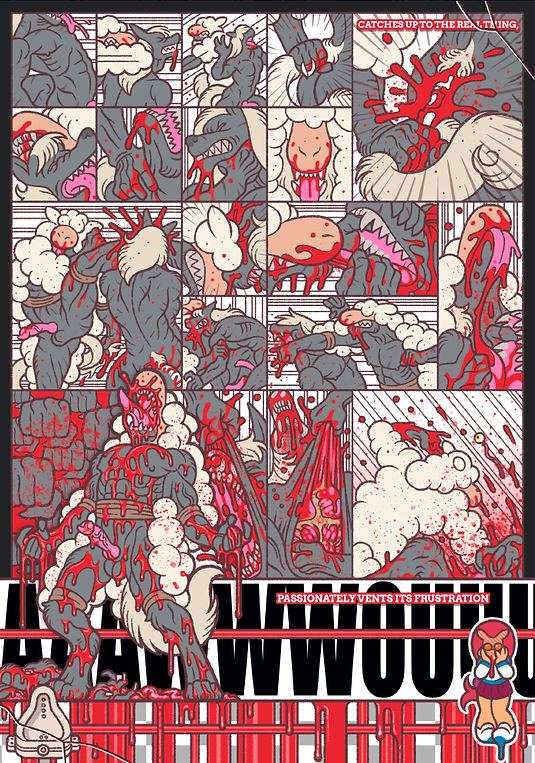 PR: I hope that even someone that fails to appreciate the work would grant me that it is both original and the product of a serious picture-making technique. I can guarantee my books will not leave you cold or indifferent, and there are big big ideas within that could really change both your outlook and your experience of life. I hope you take the plunge and engage with the content I have available online, if you do, you will discover a sincere effort to communicate on my part. I want to share with you the treasures of my spirit. I will bring a campaign to Kickstarter soon, a new project, so please look forward to that. 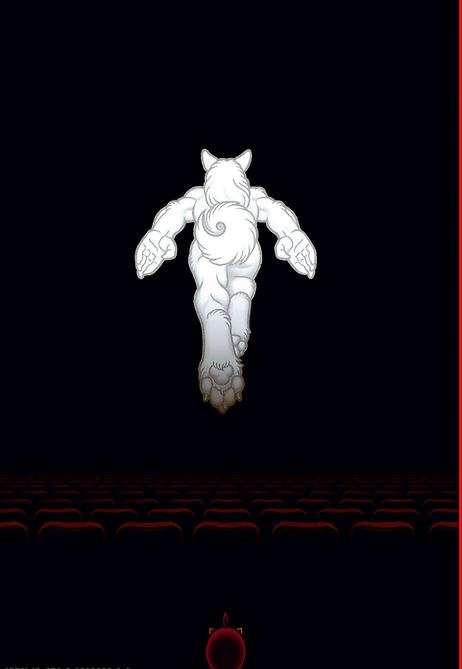 CB: Thanks and good luck, Pablo!

Get a copy of the book here!