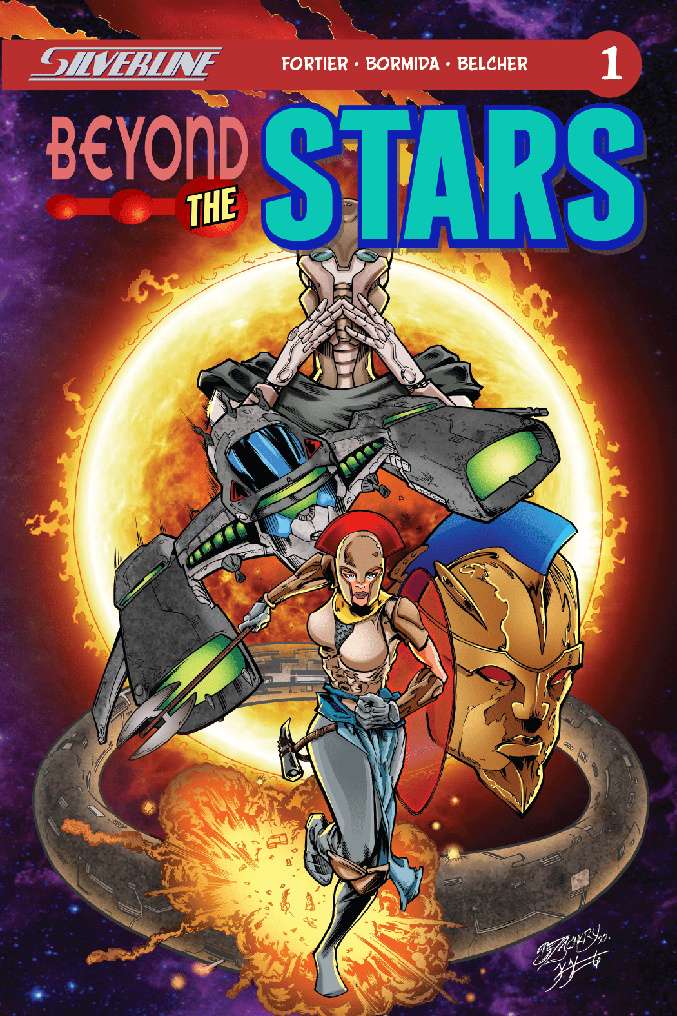 Chris Braly: Welcome to Indie Comics Showcase, Andrea. Give our readers the elevator pitch for Beyond the Stars!

Andrea Bormida:  It’s a six-parts graphic novel, sci-fi genre space opera. It’s a journey of self discover and evolution for its protagonists, set against light and darkness, in a revisited ancient greek styled atmosphere;  new bonds. Discovering more than physical world.  Every chapter is 22 pages long, full colour. In a watercolour-ish style, on classic inking. 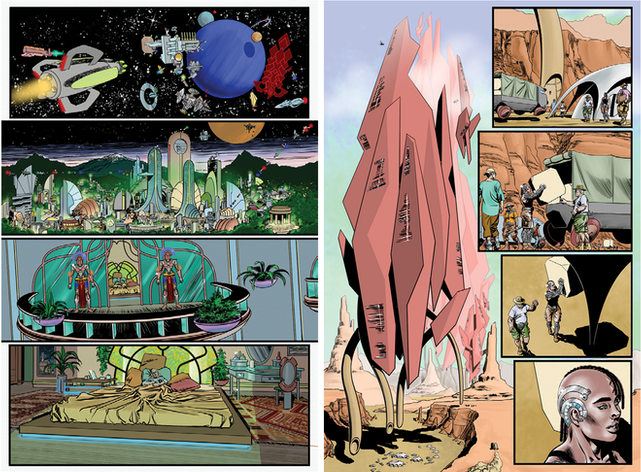 CB: I’m impressed that you’ve got it all planned out! Where did the idea for this comic come from?

AB: As an artist, it was an idea I had in the back of my mind for quite some time, but, because of deadlines from other projects, never got to working on it, except for a few pages; mainly for style evolution purposes. The basic script was then worked upon by the much better suited Ron Fortier, who also brought along Mike W. Belcher for the lettering, and Silverline Comics as publisher. 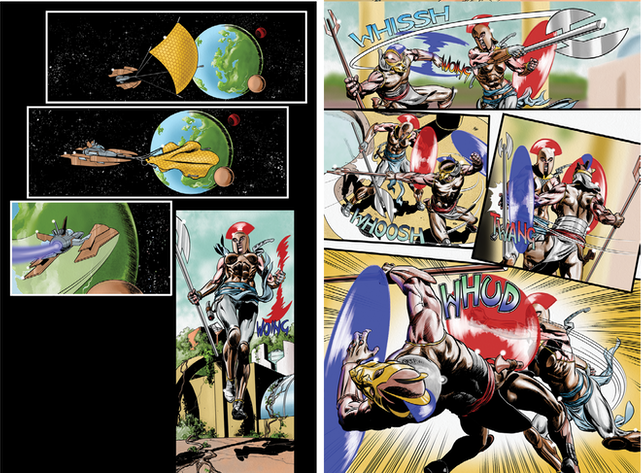 CB: What sort of reader is this comic series aimed at?

AB: Anyone who loves classic sci-fi, with some personal journey in it. Maybe someone who is curious about the graphic style, too? 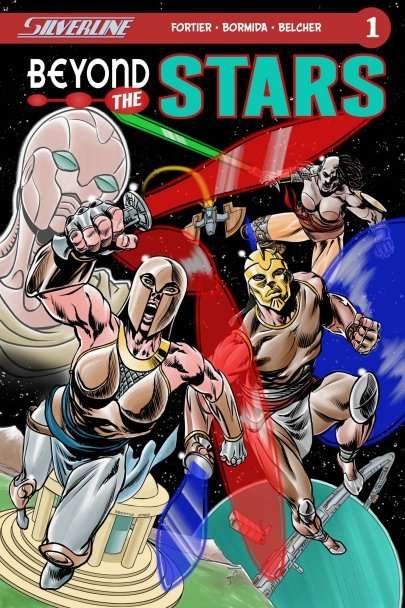 CB: Can you tell me a bit about your style and creative process, and how you developed them?

AB: My graphic style comes from a 30 years long professional comics journey. I grew up on American superhero comics, but worked for almost 25 years on Italian ones. Very different approaches. I like to think my style has evolved from both worlds. 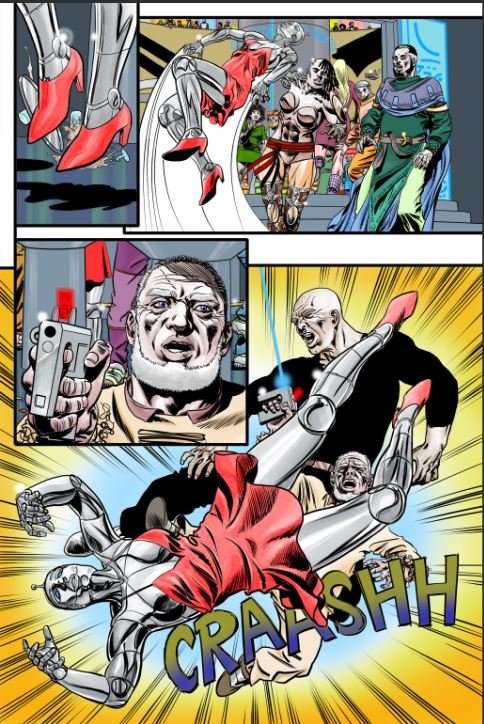 CB: You mentioned some of your creative team before. What can you tell me about them?

AB: Ron Fortier is an acclaimed American author, primarily known for his Green Hornet and The Terminator (with Alex Ross) comic books. Without forgetting  The Hulk, Popeye, Rambo and Peter Pan. Mike W. Belcher is an award winning freelance graphic designer, and  comics letterer; he publishes and creates the comic Man in the Mask with his son, Aiden.  Roland Mann is a writer, editor, speaker, and professor. As writer, he is best known for his work on Cat & Mouse, Tiny, Rocket Ranger, Miss Fury, Planet of the Apes, Battletech, Krey and Demon’s Tails. As editor, Roland is best known for his work as a Malibu/Marvel Comics editor. Now with his own Silverline Comics publishing house. And I am the artist, perhaps best known for working on Nathan Never, Legs, Videomax, Dragonero, Asteroide Argo, Heru, and Captain Luv. 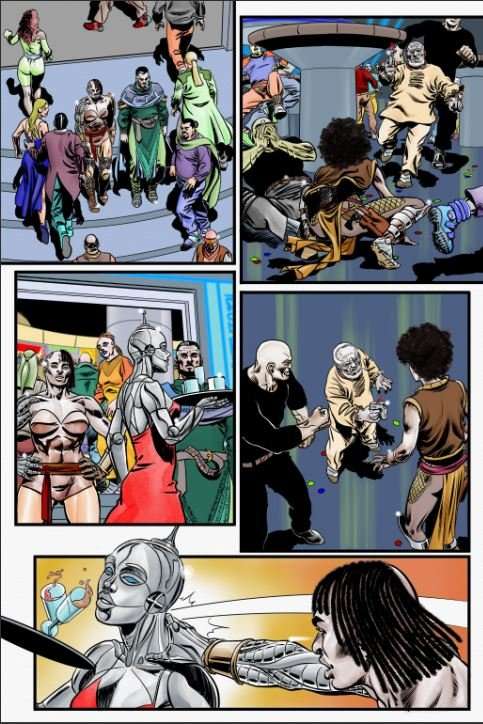 CB: Can you tell me what have you been learning so far from self-publishing this process?

AB: That drawing and promoting at the same time requires Superpowers. Mainly: superstrength and control over time. 🙂

CB: Haha! That’s something we could all use. Good luck on the campaign! Chris Braly: Welcome to Indie Comics Showcase, Jack. Can you give me your elevator pitch for Terminus Veil?

Jack Harris: Terminus Veil is an epic, action-driven storyline with a diverse cast of characters, Terminus Veil proves that heroism comes in all colors. Billowing explosions, shadowed figures, high stakes, and close calls – the Terminus Veil comic book gives you an adrenaline rush with gripping, immersive artwork. There has been a significant rise in the theft of cutting-edge technology, and one private security team is caught in the middle. In order to keep their clients happy and stay alive, they must discover who is responsible for these robberies and put a stop to the violence. Jordan Gunderson provides stunning line art with beautiful inks by Bee Rohlfs. The colors are masterfully done by Yuliia Shetsova. JH: I’ve been thinking about this story for about a decade.  It’s influences stem form 90s comics and cartoons such as X-Men and Wildcats and also anime like Ghost in the Shell and Naruto.   I decided to self publish because it’s a story I feel strongly about and I wanted to understand as much as I can about making comics. I want to over 30 issues of this book so I felt it was best to start at the ground floor. CB: Who is the target audience for Terminus Veil?

JH: If you like a lot of action and espionage this book is for you.  It’s not for kids as it does have adult elements in it. CB: How would you describe your style and creative process?

JH: This is my first book so I don’t have much experience. Overall I have been just jotting down ideas about the plot and characters for the last decade. When I started writing the script I came up with an arc outline and character profiles.  I started working with concept artists. Finally I wrote the full script for issue 1 and started to scour the internet for artists to work with.

I like to write the full script and then work with milestones with the artists. I try to let the line artist have a good bit done before I start passing pages to the inker. I do the same with the inks to the colors. CB: Who else contributed to this project?

JH: Jordan Gunderson did the line art on Terminus Veil #1. He’s worked on a lot books at Aspen Comics.  Bee Rohlfs did the inking on the issue.  Yuliia Shetsova did the colors on the book. CB: Self-publishing isn’t easy. What have you been learning from the process?

JH: The biggest things I’ve learned is how detail oriented you have to be during the editing process. It’s so easy for small thing like hair color or style to be missed. You really have to examine the pages when you are in production.  The second thing is how time consuming the marketing and PR process is.  Creating a comic is a like working 2 full time jobs.

CB: Are there more stories to tell? What is the long term plans for the series?

JH: I want to write Terminus Veil for at least 30 issues if possible. I know that I’ll be going up to issue 4 as it’s already in pre production. Issue 2 is set to be released in June.  Issue 3 is in production as well.

CB: Would love to see that happen. Good luck! 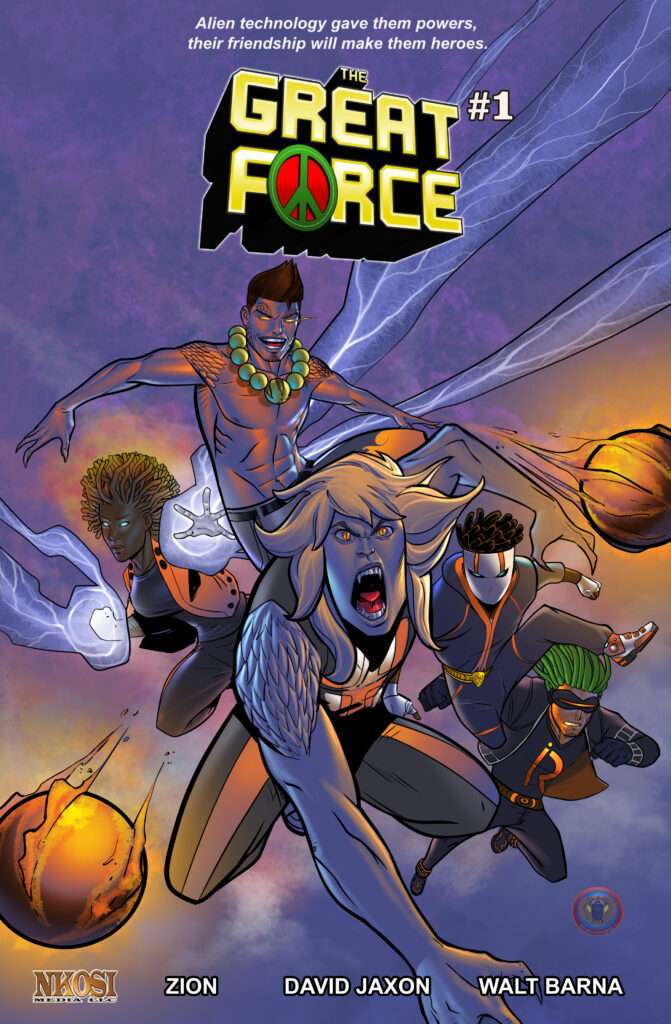 Check out The Great Force here!

Chris: Thanks for joining us on Indie Comics Showcase. What can you tell us about The Great Force?

Ced Pharoah: The GREAT FORCE is a full color 32pg comic book created and written by an 17yr.old. storyteller. It’s a superhero action/adventure about five teens who become test subjects. Alien technology gave them powers, their friendship will make them heroes. 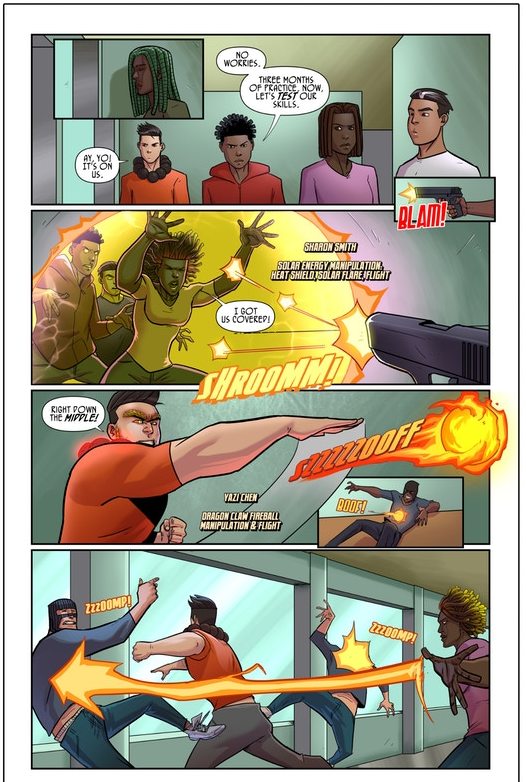 CB: So where did the idea for this comic come from, and made you decide to self-publish it? —

CP: As a Father, however, I felt a need to publish my Son’s idea and project, The Great Force. I wanted to be the steward of my Son’s ideas versus first having another company publish his dreams and possibly protect his best interests. Ultimately, he will decide how and where he takes his creativity and projects but through this process; he has learned the basics of publishing and how to bring his ideas to reality. I am the CEO of NKOSI MEDIA LLC and the publisher of THE GREAT FORCE! 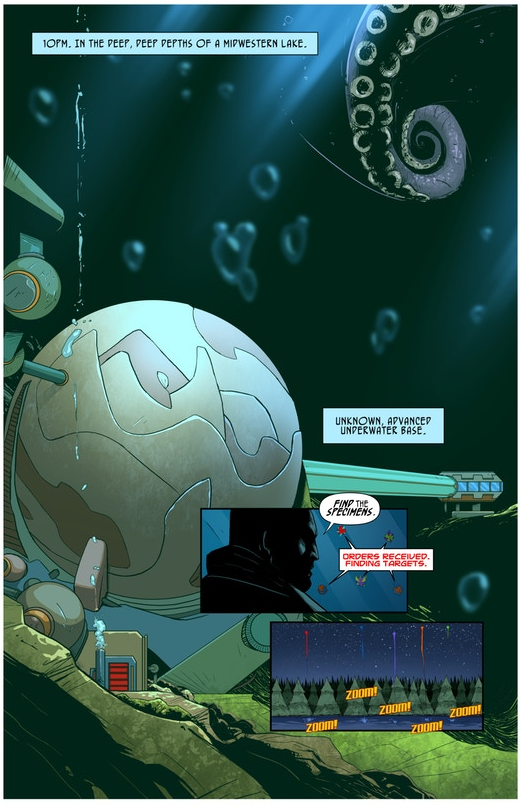 CB: So what kind of comic readers is this suited for and who is it aimed at? —

CP: I think that anyone who likes Teen Titans, Young Justice and great superhero stories. Ages 13+

CB: Talk about the creative team that contributed to this project.

CP: The creator and writer is Zion. We  have great art from David Jaxon and Gary Pope, with colors by Walt Msonza Barna and lettering from George Gant. The character designs and colors for the cover are from Mshindo Kuumba. And Vince White did our logo. 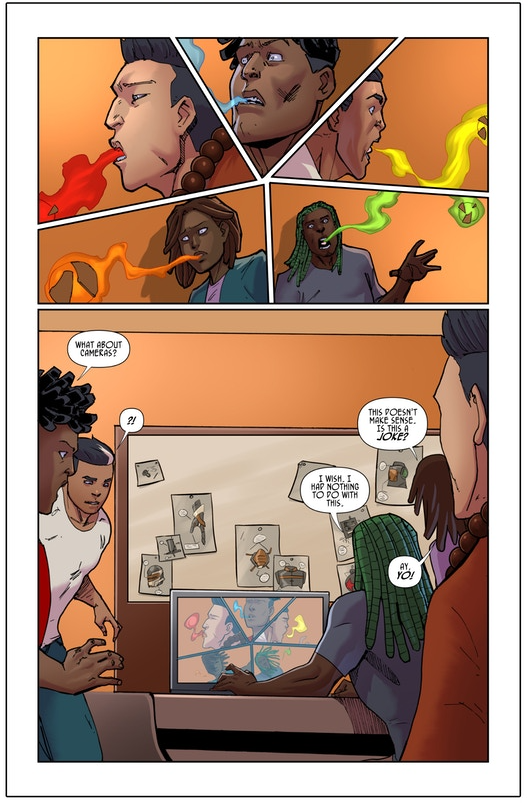 Zion is a young artist who had been working on the story, characters and initial artwork for a few years.  This has been a labor of love, a testimony of persistence  and patience. Zion and NKOSI MEDIA LLC are excited to bring his vision to reality.  Zion initially created/drawn the characters years ago. An illustrator named Hulk Daddy (Gary Pope) who we met via DeviantArt was the first artist to professionally visualize Zion’s ideas, inspired by Zion’s artwork.  After re-drawing several times, we passed Zion’s completed visual comic art to David Jaxon, who quickly re-drew the art to what is seen today. Vince White provided the logo, Walt Barna came in with colors, George Gant did letters, Mshindo Kuumba gave colors to David’s cover art. In additionally, we had several art pieces by talented artists for future pinups etc. Lastly, the book was printed by INDIE giant, Jason Reeves of 133art.

CB: You successfully crowdfunded this last year through a Kickstarter campaign. What have you been learning from self-publishing and crowdfunding and creating through this process?

CP: It is hard work but with strategic planning, budgeting, patience & creative professionalism with your network and peers; THE GREAT FORCE is ready for the world.

CP: Presently, there is plans for a second book ala graphic novel; this book and books 2 & 3 combined.  This will complete the ‘first season’ of THE GREAT FORCE.

CP: NKOSI MEDIA LLC is proud to make Zion’s project, THE GREAT FORCE its first project. He is just getting started..he is the FUTURE of Comics and Storytelling.

Check out The Great Force here!