ARACHNA 2:
The Most Dangerous Game
by Ai 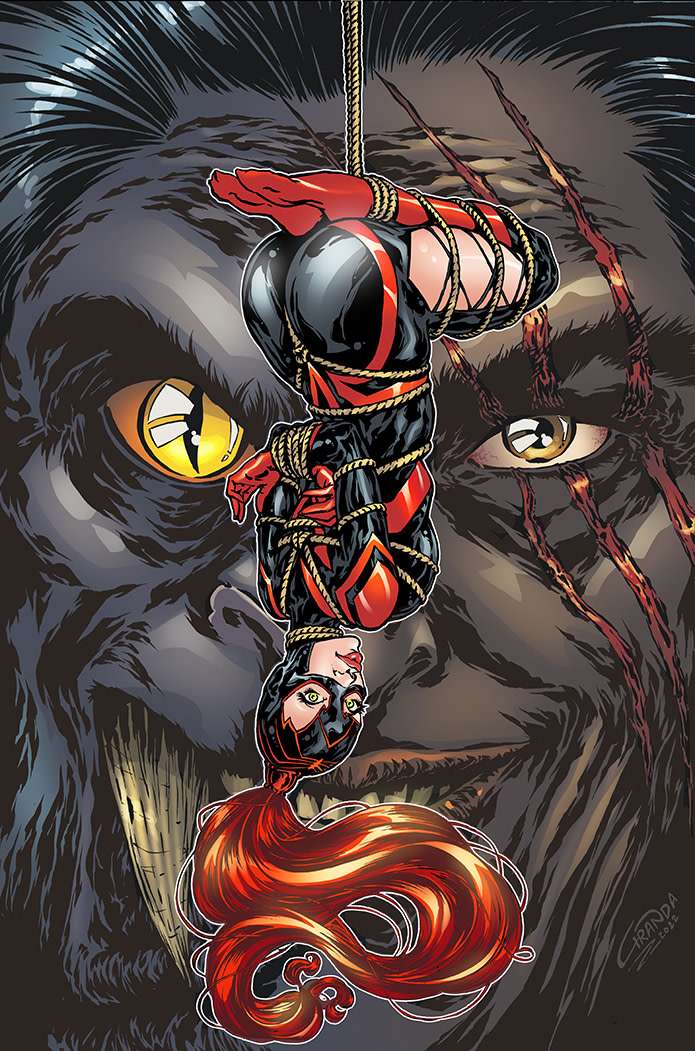 Check out the crowdfunding campaign here.

Chris Braly: Welcome back to Indie Comics Showcase! Let’s talk about Arachna 2! Catch us up from the previous installment. What’s the pitch?

Ai: Obsession. It’s a dangerous thing. Arachna is obsessed with hunting down Doc Diablolique after the events of her first adventure. She’s extended an olive branch by the mysterious amazon, Tayanna, who tells her that her boss has captured Doc and is willing to trade him to her if she agrees to meet him on his island. Arachna’s obsession gets the better of her and she soon discovers that not all is what it seems and the hunter has become the hunted. 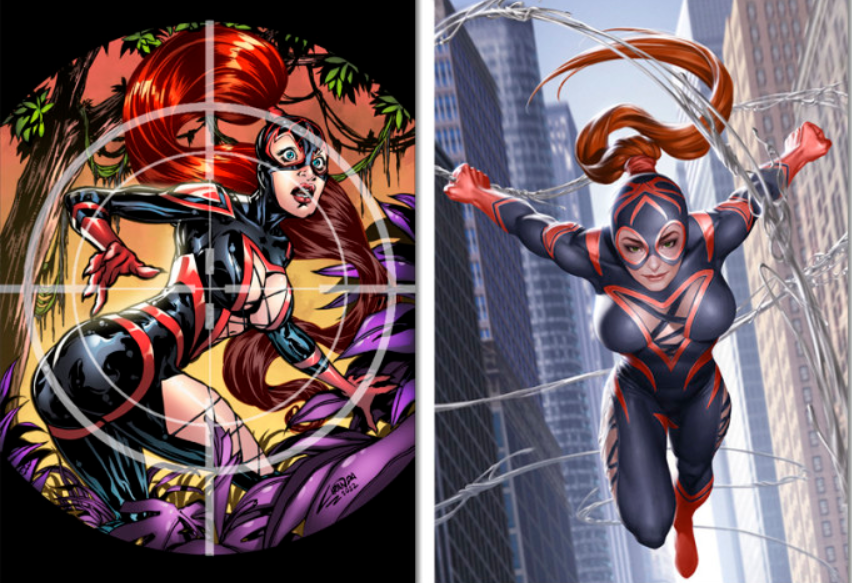 CB: Take us back to where the idea for this comic came from. What led to you deciding to crowdfund it?

Ai: The genesis for X53 Studios is the mediocrity of the mainstream comics industry. Whereas the 80s produced some of the most groundbreaking work in comics, I think the last 5-10 years have produced some of the worst capped off by Snowflake and Safespace. There are a couple of things you can do, you can complain about what these corporations are doing to these characters or you can create your own. I decided to create my own. The genesis of this story is the movie, “The Most Dangerous Game”, a 1932 film where a hunter likes to hunt humans. In this case, the hunter of this story likes to hunt superhumans. The success of Arachna: The Adventure Begins led us to crowdfund this sequel. 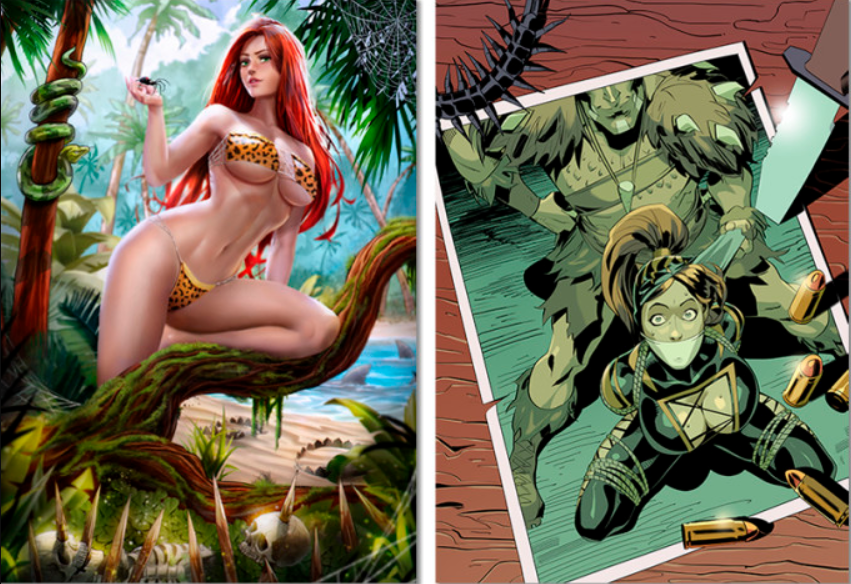 CB: What kind of comic fans is this book squarely aimed at? 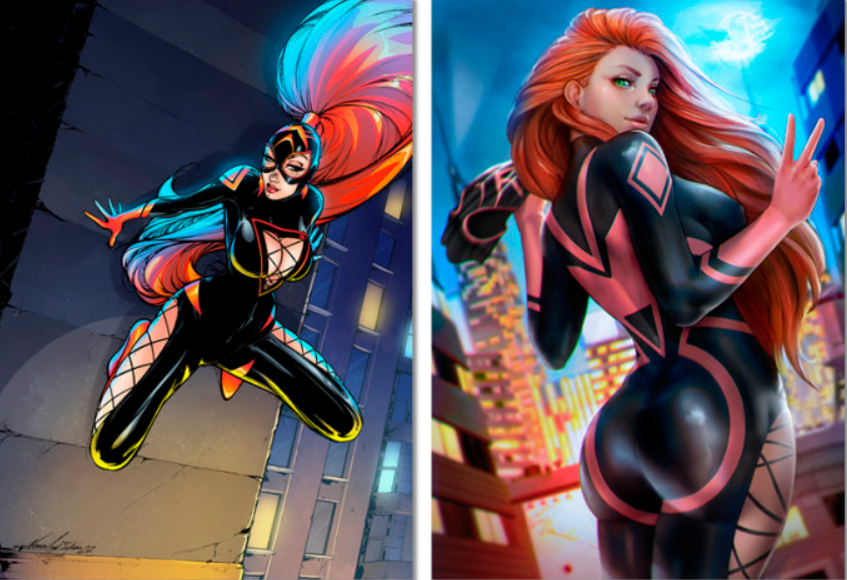 CB: Tell us a bit about your creative team that have contributed to this project.

Ai: We have Carlos Granda returning to do the artwork, he has put his stamp on Arachna and this is his book now as far as the look is concerned. Martti Kauppinen returns to write the book and some of the things that come out of his head are pretty amazing. Carlos and he make quite the team. Then we have two newbies to X53 Studios. Javi Laparra is the colorist on the book and Alex Simmons is the letterer. And as you can see from the preview pages, these two didn’t miss a beat. 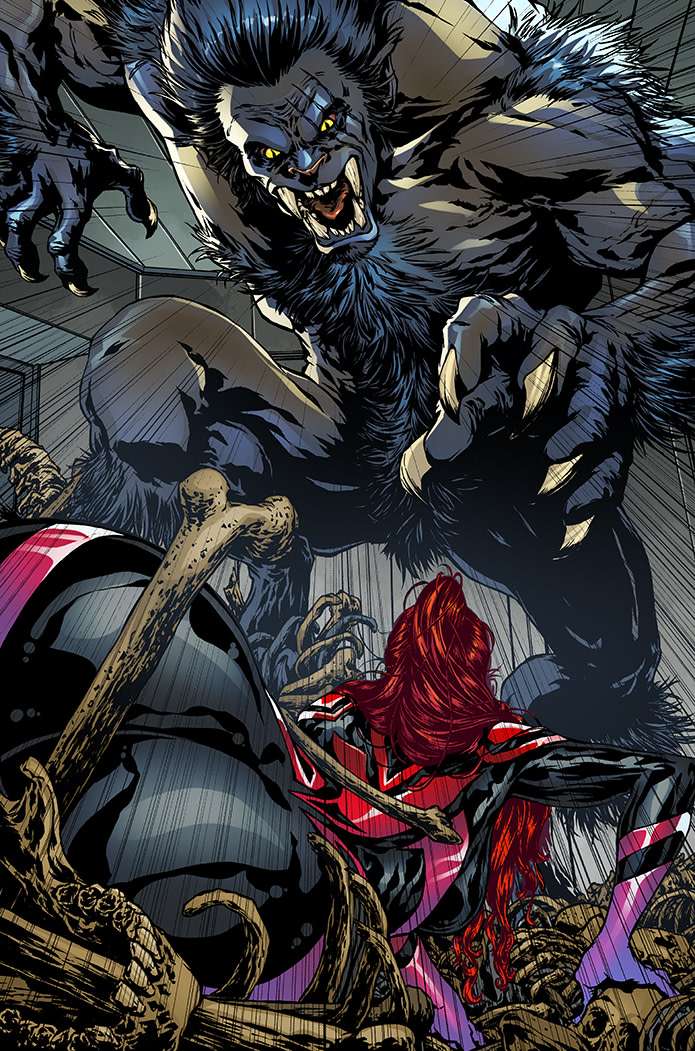 Ai: This is my second time around with crowdfunding and it hasn’t gotten any easier. It’s very nerve-wracking to look at the total every day and hope you get more sales than the day before. On the plus side, the best thing about crowdfunding is that it lets you find your audience and get your project funded. 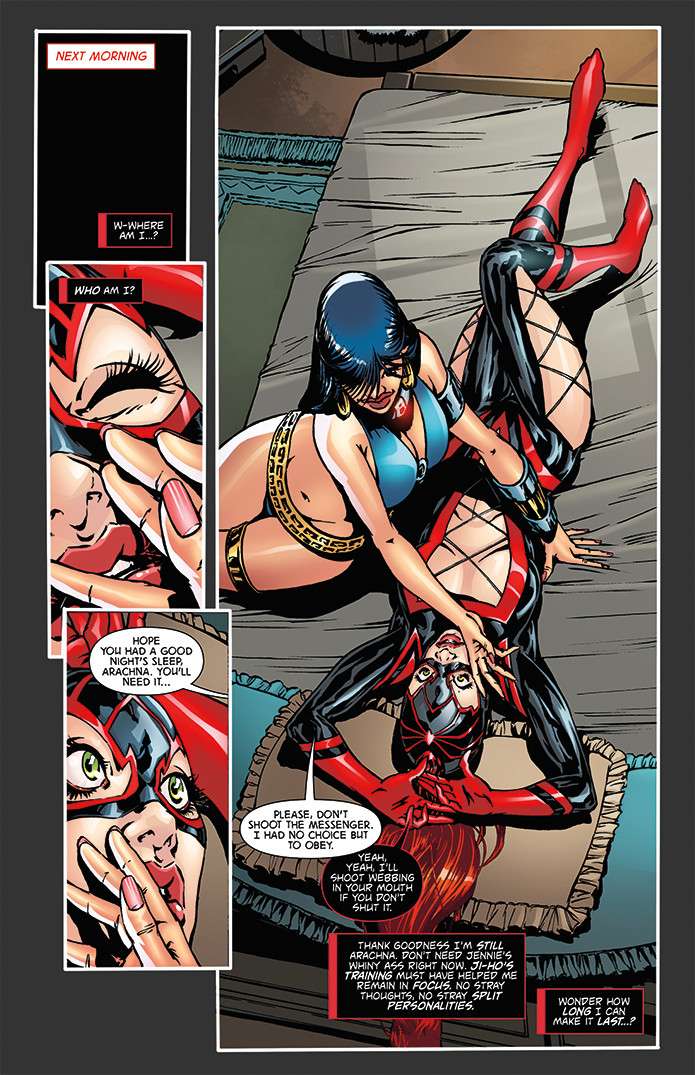 CB: What is your purpose for telling this story and what are your plans beyond this book? Will there be another installment?

Ai: There is going to be a shock ending to Arachna: The Most Dangerous Game that readers won’t see coming, so yes, there will be a volume 3. We will continue to publish Arachna as long as there is a demand for it. As for the purpose of telling this story, it goes back to the reason why I started this company; I just want to tell fun stories that people can lose themselves in. 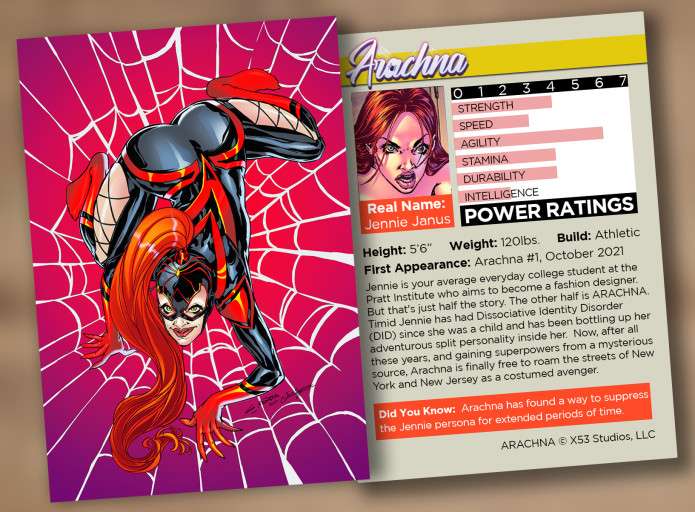 CB: Thanks for chatting and come back when you kick off the next volume!

THE LOST GARDENS
by Scott Humes 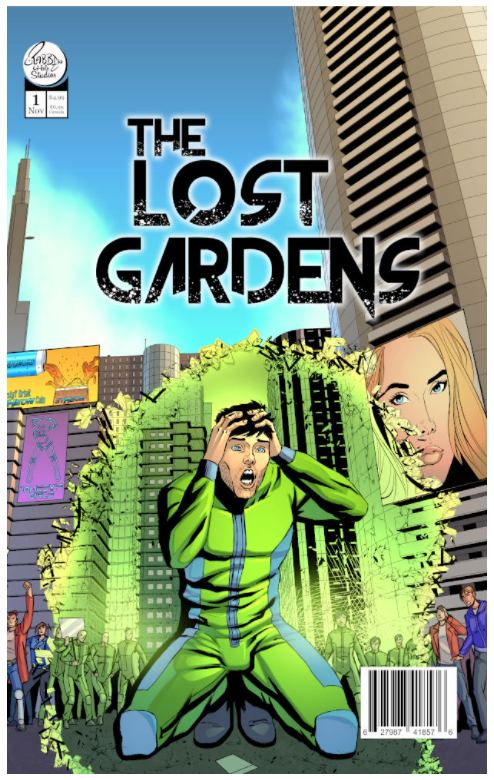 Check out The Lost Gardens here!

Scott Humes: The Lost Gardens follows the life of Shawn Myers, a meek employee of the Ministry of Parts. Set in a world that indulges in a false luxury brought to you by the Etheon Corporation. Shawn’s life begins to unravel as his own technology implants turn defective, spiraling him downward economically, and by a supernatural entity calling itself Fear. 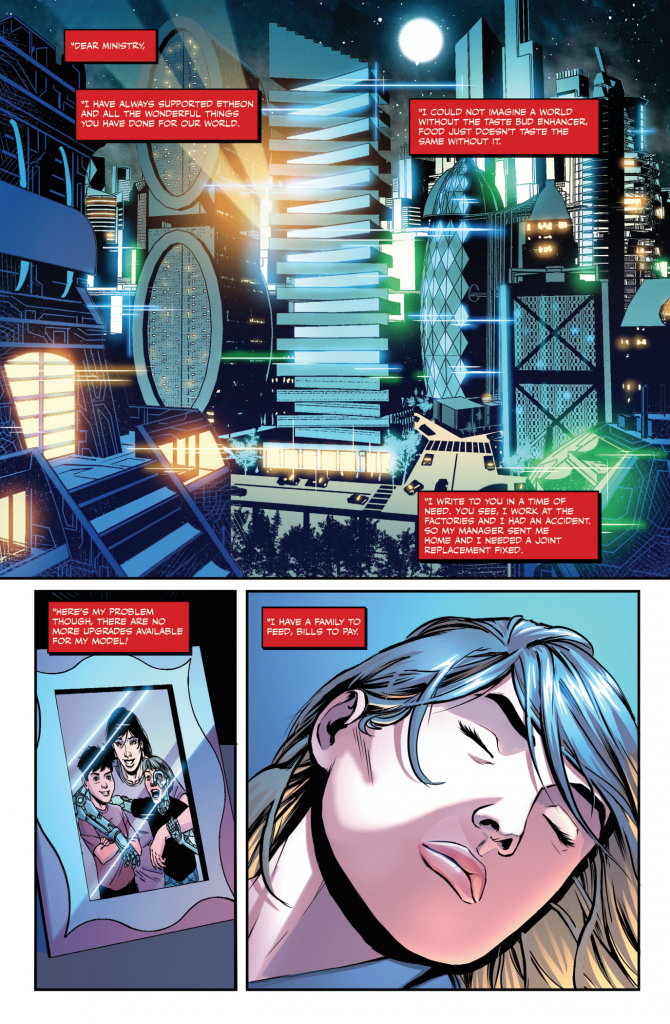 CB: Tell me how this went from an idea to prompting you to self-publish these comics?

SH: It was originally from a game of the same name we were developing. We thought creating a comic series that expanded the lore would be a fun project. I originally was a game designer (still am) and have had a lot of fun working on comics. I like to work with a relatively light touch and allow projects to evolve as characters and settings develop. on occasion I will push something in a direction I feel the story needs to go, but overall I like the team to flex their creative muscles as much as possible. 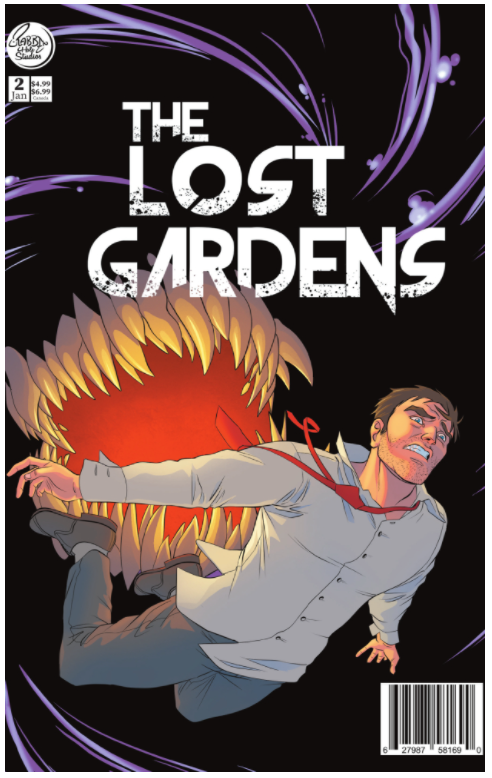 CB: Can you introduce your creative team? How do you guys work together?

SH: The team consists of myself as producer, James Babineau is the author. Debora Lancianese is the illustrator. Our colorist is Michael Woods, and Robin Jones is our letterer. We created a story arch to cover 40 issues. We then produce the script for each issue following that arch pass to the illustrator for review and edits, complete illustrations, coloring, and finally lettering. 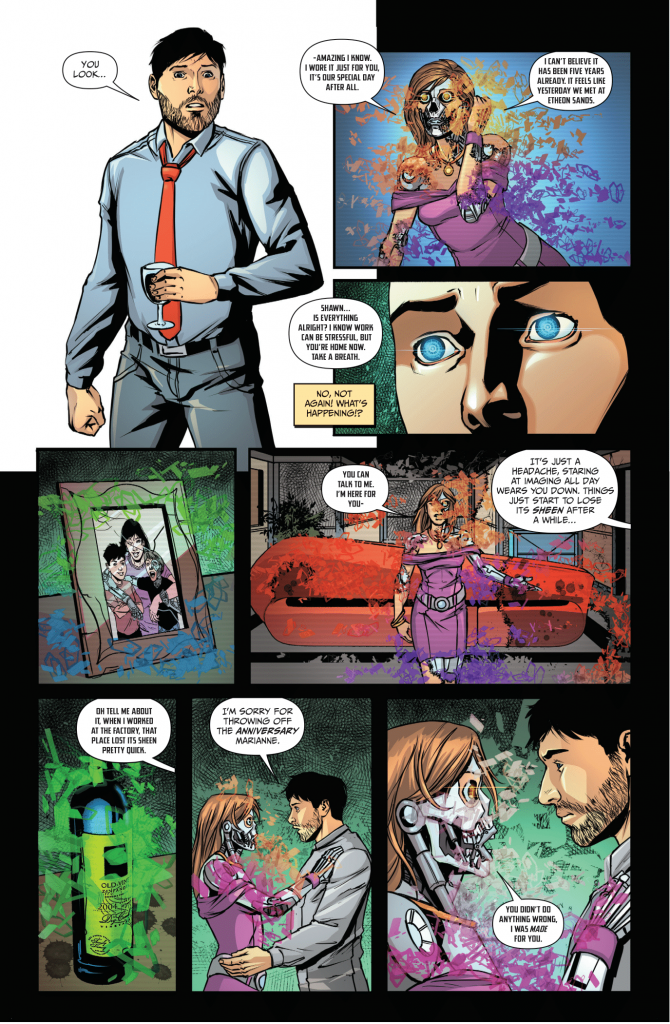 CB: What has been the biggest thing you’ve learned as an indie creator who is self-publishing?

SH: The biggest learning curve involved for me was creating a good way to distribute our books to stores while maintaining reasonable profit margins for ourselves and retailers until we are onboard with a major distributor. 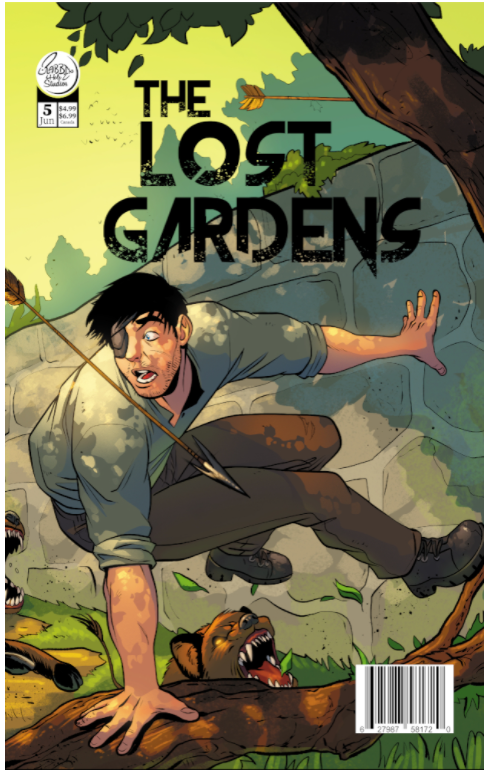 CB: What kind of comic reader might enjoy this the most?

SH: It’s a blend of a high tech universe with supernatural elements which will likely appeal most to males 20-34 who are interested in cyberpunk, fantasy, and dystopian settings.

SH: We really love working on this project. The Lost Gardens is going to be diving into some dark things and settings I can not wait to share. 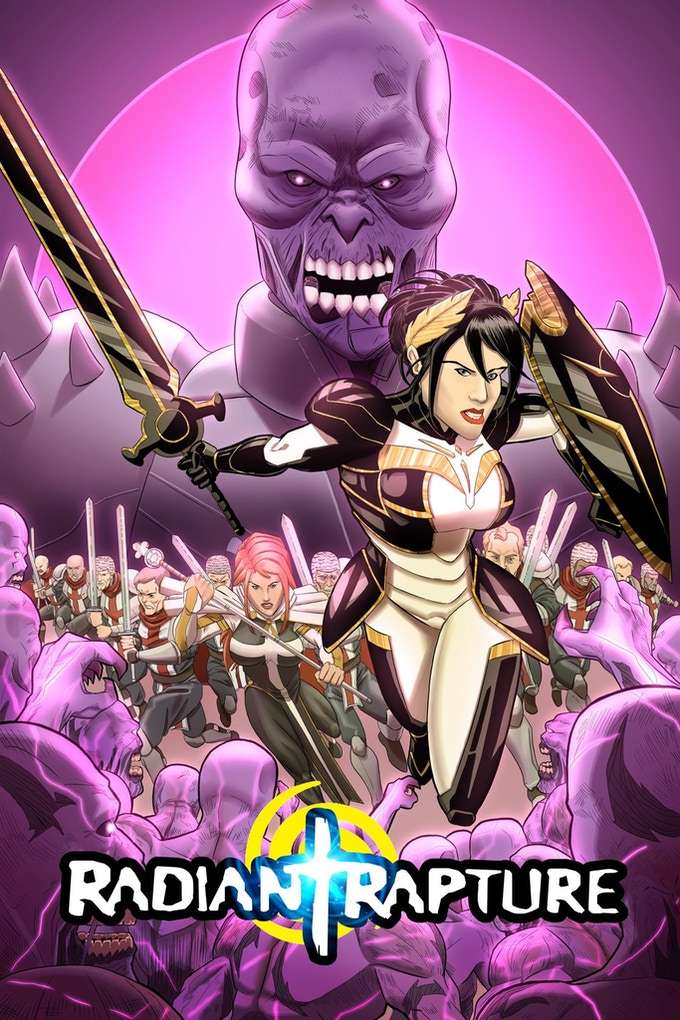 Chris: Welcome to Indie Comics Showcase, Nicholas! Briefly tell us about Radiant Rapture and how you came up with the idea.

Nicholas: Radiant Rapture follows Naomi, a nun turned demon hunter as she battles the Nocturnal King and his army. Radiant Rapture is a prequel to Demon Hunter Raven, and this summer’s Crusader series. It’s building into a large narrative story that effects all these characters, a very large story being told in the past and modern day. Each one effecting the other in various ways.

When I was working on Demon Hunter Raven, there was a large demon hunting organization called the Order. The Order is a paramilitary group in the church that protects people from supernatural threats. With this story I wanted to explore the history and foundation of this group. 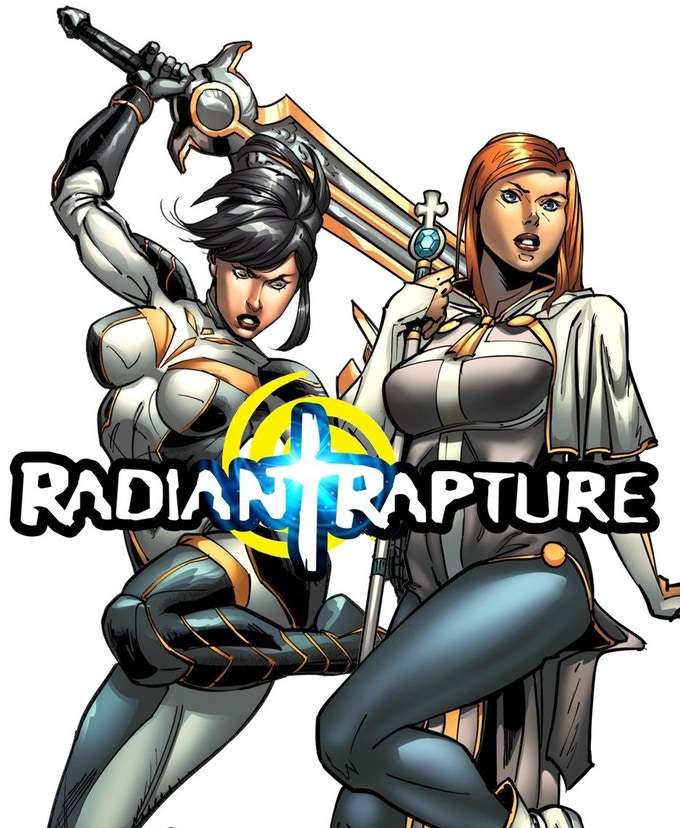 CB: What kind of reader would you say this is aimed at?

NM: This book is well suited for fans of action and adventure, with a touch of supernatural elements. The story revolves around the events of the Nocturnal King as he is conquering the area around him, enslaving those he captures and using them to dominate the land. 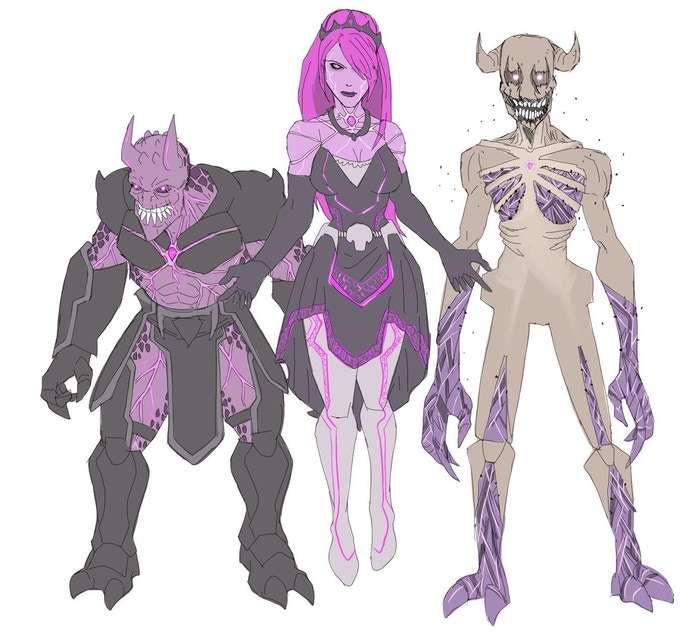 CB: You did this all yourself. That’s quite a feat. Can you tell us about your style and creative process, and how you developed them?

NM: My creative process closely mimics a movie production, from outlining the script, thumbnails and working on the book. I’m always tweaking the dialogue until it’s ready for release, and fixing art mistakes as well. For this project I decided to go alone, I wanted to challenge myself and see what I could produce on my own again. For other projects I assemble a team, but for this one I wanted to tell a very personal story about faith, ideals and confronting fears. 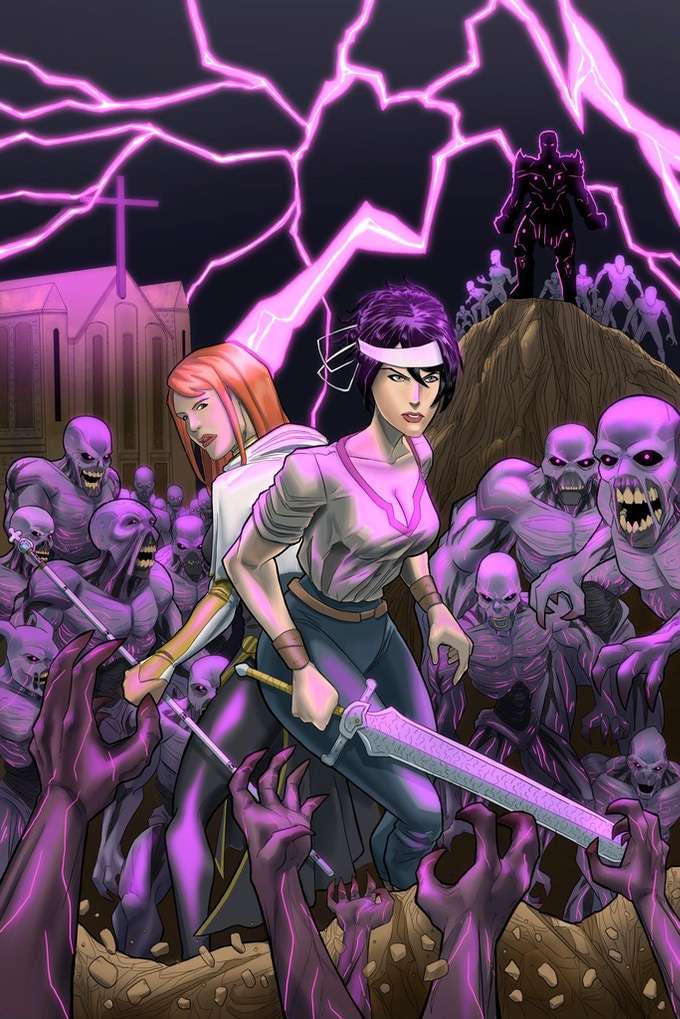 CB: How far along is the book?

NM: The book is currently 65% finished and projected to be done by the end of the campaign. My workflow can be a bit insane, while having 8 books in various stages of production I might have to shift gears throughout the day to get something to another creator I am working with. Before we launch a campaign, I try to have early work in progress versions up on our Patreon for our readers. 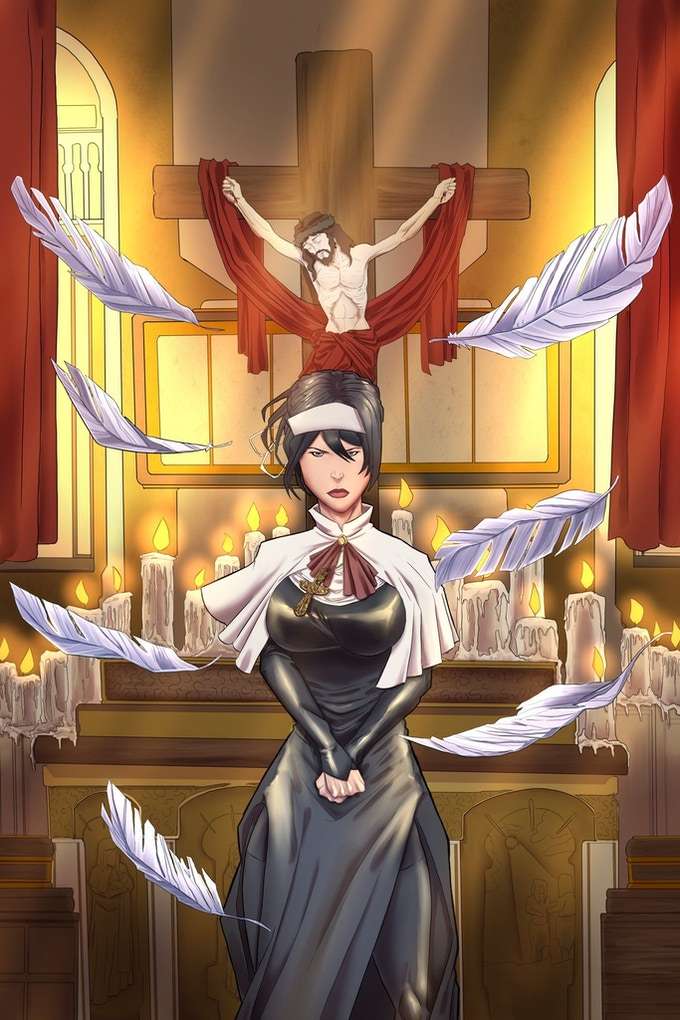 NM: Creating, marketing and everything is a marathon in this field. You can’t be afraid to market yourself or no one will hear about it, almost all of the time you are the only one advocating for it. 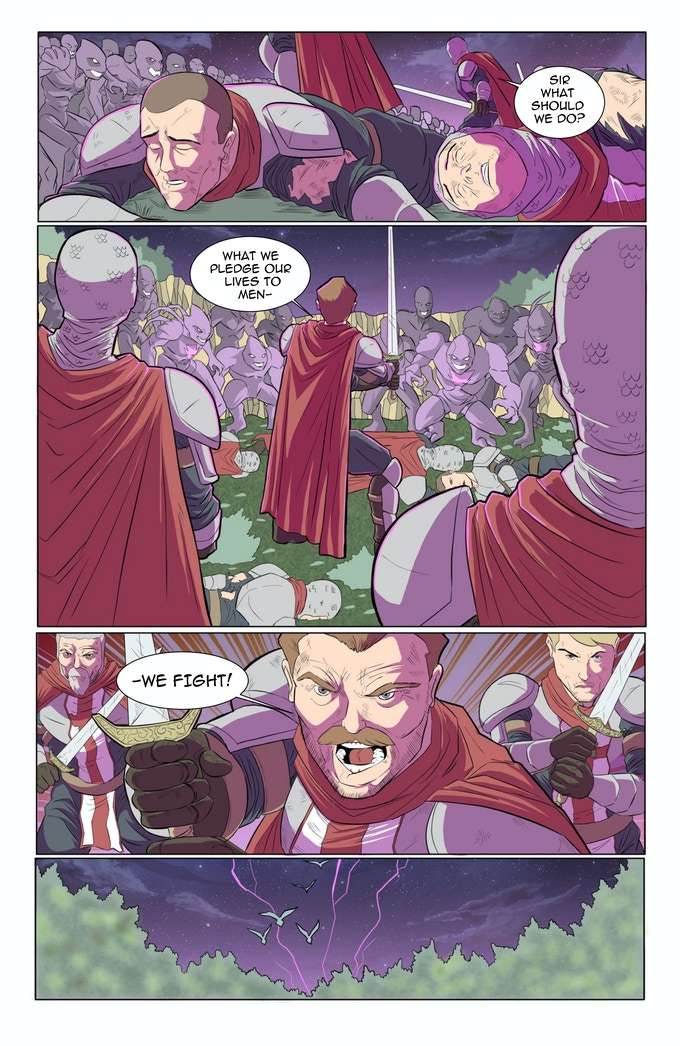 CB: So what are your plans beyond this book? Are there more stories to tell in this universe?

NM: This story takes place in the past, which follows Naomi as she establishes the Demon Hunter organization the Order. There are 5 volumes planned right now with room for more, but at the same time we will be following modern day characters of the organization this Summer with the launch of the Crusader. His story will show how they deal and operate with the same problems in todays world. 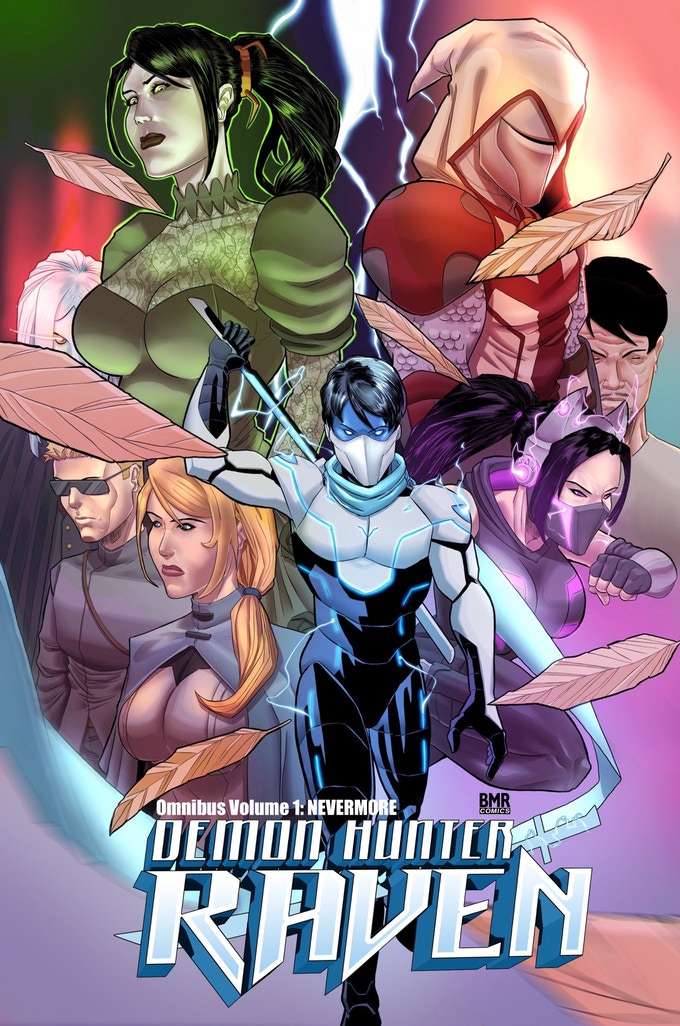 CB: Sounds great. Any last words about the project for our readers?

NM: I just want to thank everyone that has backed a campaign, bought a book directly or supported by sharing my work with others. My dream has always been to share stories with others, and because of my readers I’ve been very fortune to do that.