It’s time for another incredible installment of Indie Comics Showcase, the weekly blog where we signal boost a few truly independent comics that are currently crowdfunding their projects, crowdsourcing their funding in some way, or just completely self-publishing on their own. Every little bit of support for these creators matters, from a single dollar pledge to the twenty-five dollar bundle, and of course the higher tiers are usually fun too! Even if you can’t back a campaign or buy a book, you can share or tweet about these projects to your friends and followers. 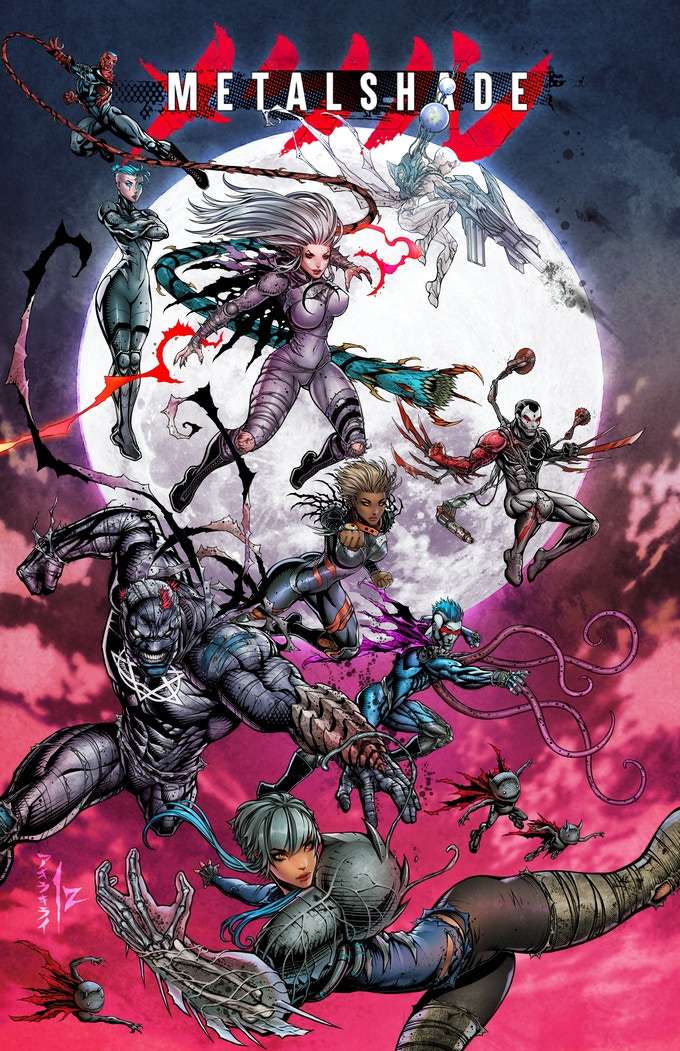 Chris Braly: Welcome to Indie Comics Showcase, Izik! Tell our readers about MetalShade and where the idea originated.

Izik Bell: MetalShade is an arcane strike force that becomes entangled in a war with ancient, dark gods. I’ve been working on this idea since I was about 17 (I’m almost 40 now) and it really sprung from my desire to make my own comic series. I grew up around the early Image era of comics and independent creators publishing their own IP’s was always what inspired me most. 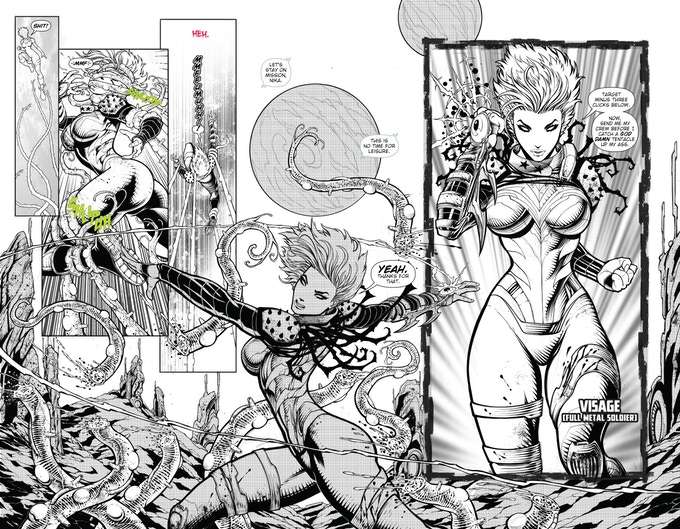 IB: MetalShade is a dark superhero/sci-fi comic full of violence and adult themes. It features highly detailed art, dark humor, and in-depth character building/story telling set in a dystopian world. If that sounds cool to you, you’re my target audience. 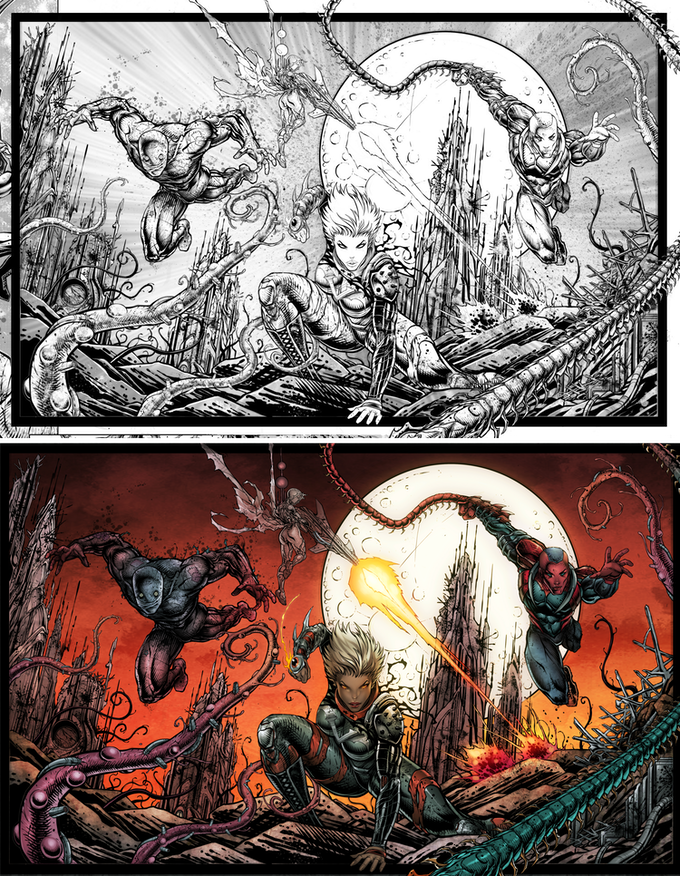 IB: I obsessively work on this comic 24/7. I jot down ideas, sketch out scenes and start to mold them into finished stories. 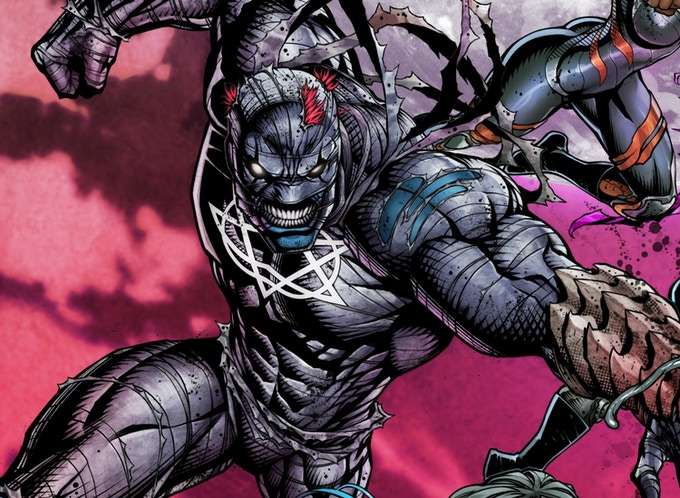 Talk about your creative team that contributed to this project

IB: My fiancé is the other half of MetalShade’s creative force. She provides all the colors, variant covers, edits my scripts and sets up our campaigns. Her name is Alexa Lo and she is a total badass. 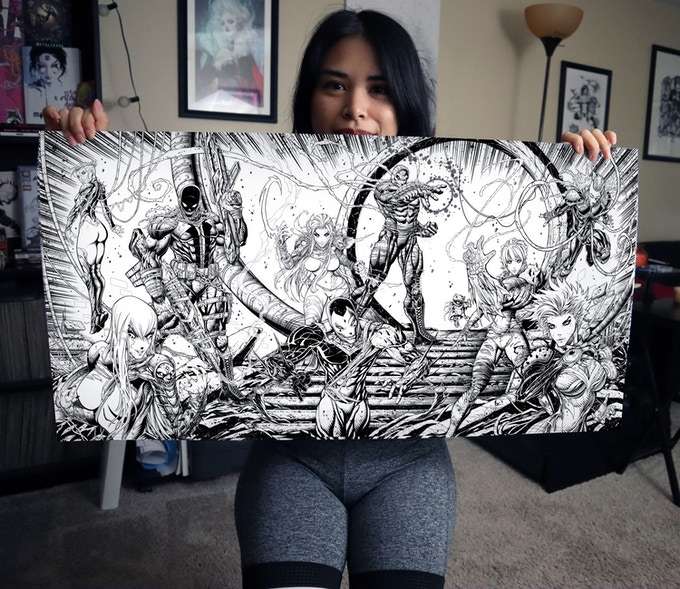 What are your plans beyond this book? Are there more stories to tell?

IB: Two issues are already in print, and we’re currently finishing up issue zero. The next big campaign will be “The Entire First Arc” and will wrap up the initial storyline with issues 3 & 4 as well as collect 0-4 in trade format. I also have been working with another artist on a spin-off solo title that we will launch late this year. I also want to get MetalShade on Indiegogo, but I’m not sure the right way to go about it. I’ve seen other big Kickstarter books flop on their, and MetalShade is so dear to me, I dont know if I can take that! 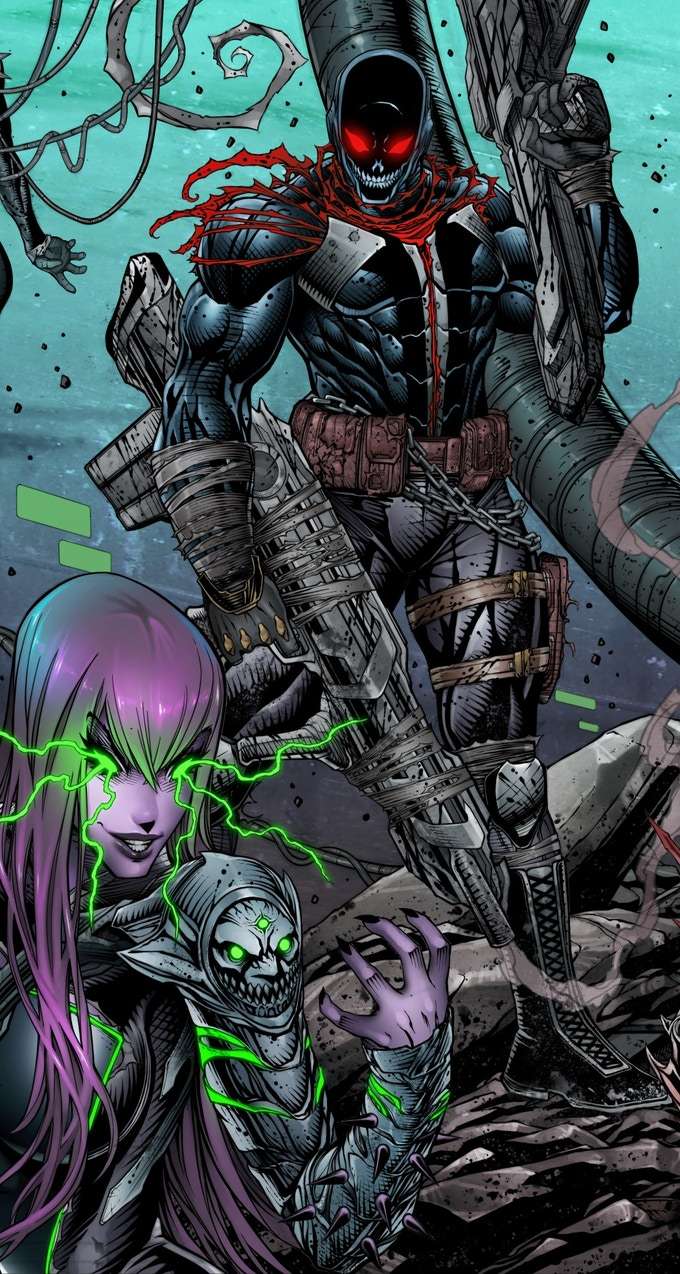 CB: Before we sign off, tell me how the campaign is going so far. It’s got two weeks left, right?

IB: There are a ton of extras that will come with the current issue on Kickstarter. We always offer stretch rewards and we have unlocked lots of them already! Come check us out online at akirakiraistudios.com. 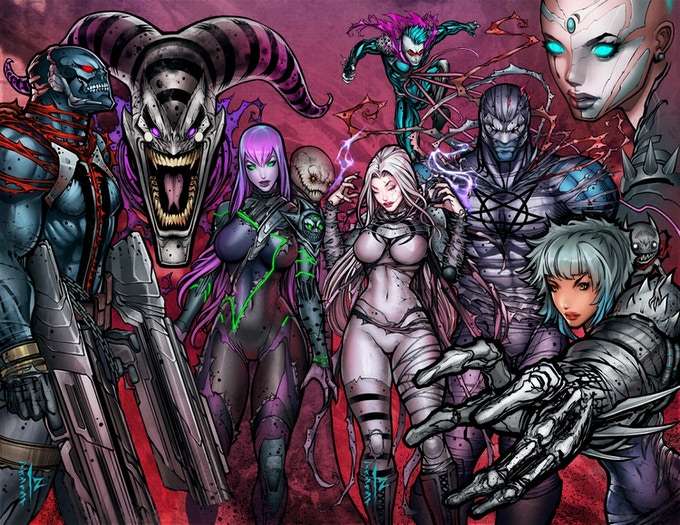 Check out the crowdfunding page for MetalShade here!

Tevin Fields is The Watchman
by Lyle Ringold Chris Braly: Briefly tell us the elevator pitch for your comic (what’s it about?)

Lyle Ringold: Tevin Fields Is The Watchman is about and young man returning home from serving his country, to find out his father died and that his city is being over run by corrupt politicians and thugs. Tevin takes up his fathers mantle as The Watchman to continue his work and make his city great again. Stay vigilant for this colorful 21 pager. 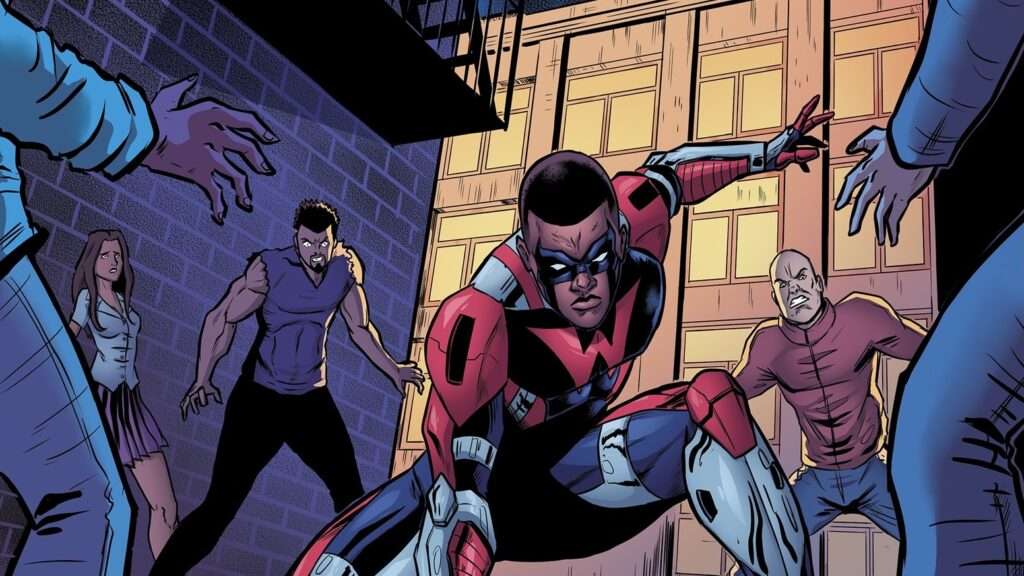 LR: The idea for this series came from me wanting to put more street level characters in the forefront, especially of color as well. Growing up I was in love with Nightwing/Robin – and still am. We do not see that many street level heroes leading the way anymore. Mine has a twist though, he is also enhanced. I chose to self publish because I found a great company in Konkret Comics and they believed in my vision. LR: This is my first comic I ever put out. I literally just sat down and started writing and the story just flowed from my brain to my pen, to the pad. I was always good and writing in school, I have a big imagination and it comes from my love of movies, books and TV. I also listen to my favorite musicians or have the tv playing as I write to calm my mind. CB: Talk about your creative team that contributed to this project

LR: I am with Konkret Comics, the main people of that team I communicate with us the owner Lonzo Starr, and previous editor and chief Daniel. They were big help on this book and did not hold back on criticism. They were my letterer, editors and calming factors while making this book. I met them online via twitter and Instagram and we have never even met in person yet and it’s been 3 years. 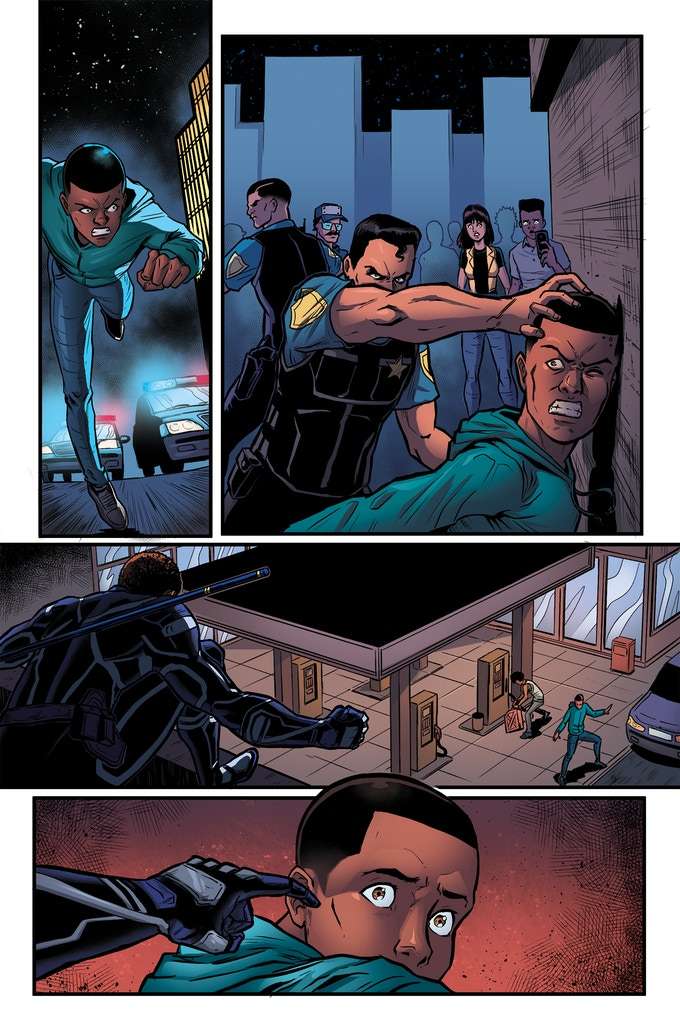 CB: What’s your production workflow like? And if it’s not complete, how far along is the book?

LR: The first issue of this series is already done and ready to buy from Konkret Comics online. I like to work at my own pace. Whenever a idea pops in my head, I jot it down somewhere and start expanding on it later. I like to write during my off days from my full time job. 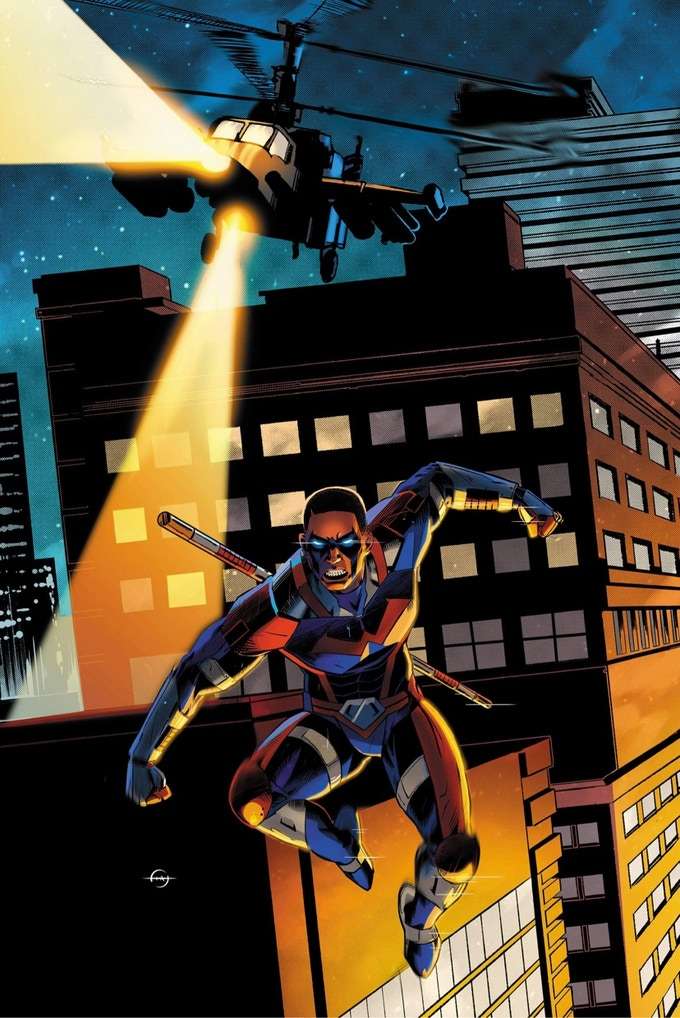 CB: What have you been learning from self-publishing and creating through this process?

LR: Self publishing is actually harder than I thought at first. You have to have an online social media presence and I was never one to stay on social media 24/7, but my team told me I had to learn how to do that. Also crowdfunding was hard for me seeing who would put money into my product and who wouldn’t. It made me think my work is good but at the same time not good enough.

CB: Are there more stories to tell after this book?

LR: There are many more stories to tell, many spin offs coming. New stories coming as well that won’t even be comics, some are graphic novels and manga. Then I’m breaking into the film industry.

CB: Thanks Lyle. The book looks good! Anything else before we sign off?

LR: Stay tuned for issue 2 coming this year with lots of perks for that next issue.

Check out Tevin Fields is The Watchman here! 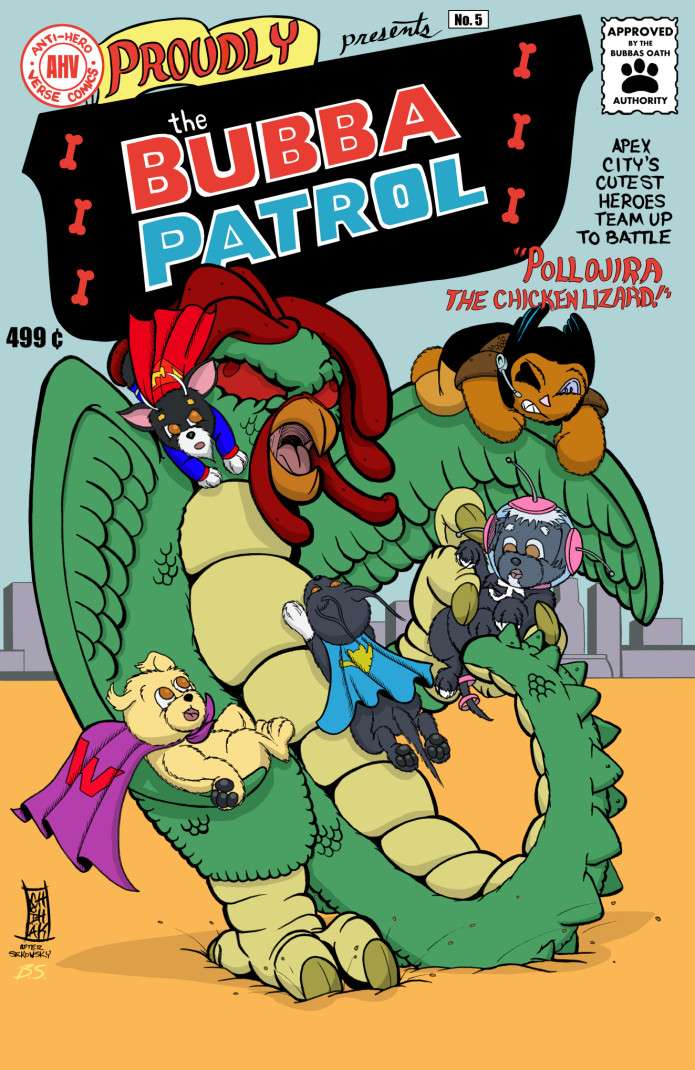 Check out the crowdfunding campaign here!

Chris Braly: Welcome to Indie Comics Showcase, John Anthony. Give me your description for The Bubba Patrol!

John Anthony: Bold and colorful, the Bubba Patrol is a throwback to the Bronze and Silver Age where comics didn’t have to be overtly violent and dark or a deconstruction on the genre in order to tell an amazing, comprehensive and quality story. The Bubba Patrol is a team of superhero dogs, protecting Apex City, who prove the greatest asset is the size of your heart and the best super power of all time, is hope. Issue 5 is 28 pages of full color action and heart, printed on good old school newsprint.

JA: The Bubba Patrol is based on my dogs. They’ve been my little superheroes since the age of 14, and have been with me through good times and bad. They never gave up on me. And while I had been creating comics since 2006, they were always darker, and edgier products. Due to a life altering change in 2016, I decided the Bubba Patrol had to get made. It’s easily the most personal project I have ever worked on. 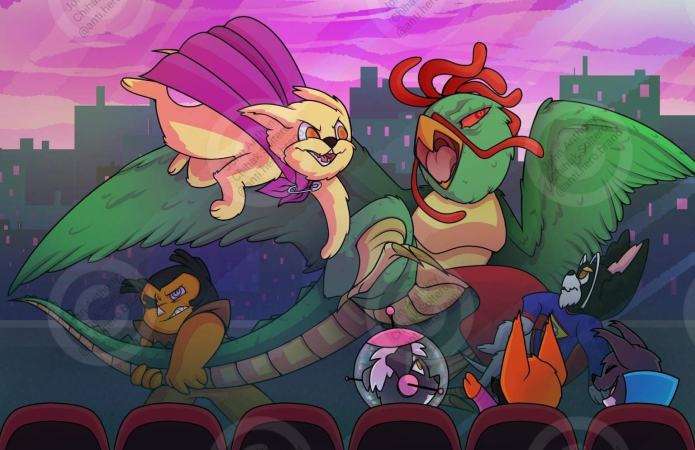 JA: It’s an all-ages comic book. And while a younger reader could easily pick it up, because of a lot of the references I use, it’s great for older reader/collectors. 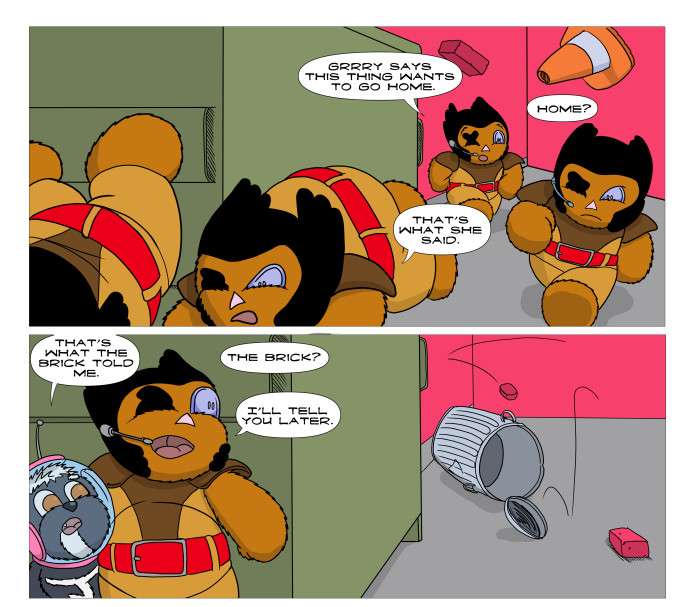 JA: The best way to relate the visual style is a simplified Don Bluth feel, with 2D animation style coloring. Part of how I developed the characters, is by talking out loud to the dogs, giving them very specific voices and powers based on their personalities. I have been using basic writing steps and outlines for the last several issues, and using small points from previous issues of the Bubba Patrol to contribute to the forward progress.

CB: Who else has helped contribut to this project? 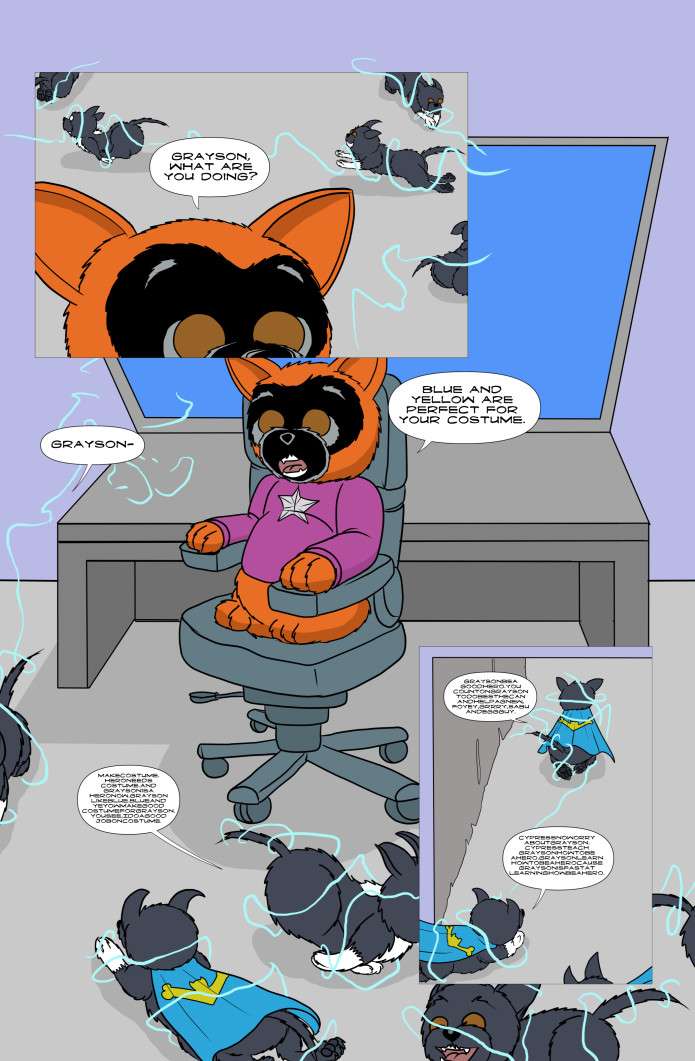 CB: What’s your production workflow like? And what are you learning through creating your own comics?

JA: Typically my creative process is working at night, with movies or YouTube videos in the background as I draw digitally. With issue 3 to current, all interiors on this project have been completed digitally, with the exception of the covers and the final page of interior work for this issue (issue five). The book has been sent to the editor and should be ready to send to the printer by April.

Through self publishing, I have learned so many things about the process from start to finish, including my shortcomings, which include self promotion and building my brand. This time around I made a prelaunch page and hired consultants to help with making my intro video, and with mid campaign notifications/promotion. I have also learned that starting with an outline, I can build a more dynamic story and working digitally greatly speeds up my production. 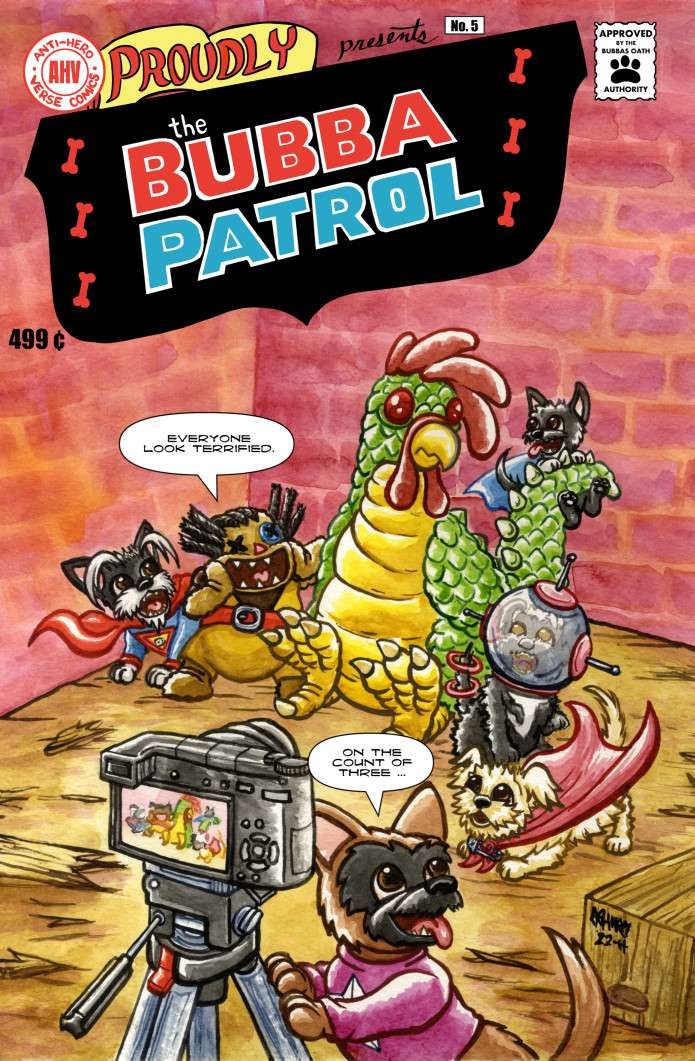 CB: Any plans beyond this book? What makes this comic unique?

JA: Following fulfillment of this issue’s campaign, I will take a break from the Bubba Patrol. There are a few projects I want to try while I recover from the emotion tied to the Bubba Patrol. The delivery of the product will change, as I will be producing any and all future projects in one shot or graphic novel formats. There are absolutely more Bubba stories to tell.

This series is printed on newsprint, in keeping with the Bronze/Silver Age feel. The campaign has sketch cover/original artwork perks and three super limited variant covers. I am also offering the option of going digital for the first time ever. And retailers can pick up bundles, ad space and even an exclusive cover that is totally their own.

JA: I would just like to say thank you for considering backing this project and I appreciate you all for supporting indie comics.

Check out the crowdfunding campaign here!