Welcome back to another installment of Indie Comics Showcase, the weekly blog where we try to signal boost truly independent comics that are currently crowdfunding their projects, crowdsourcing their funding in some way, or just completely self-publishing on their own without the benefit of an established publisher. Every little bit of support for these creators matters, from a single dollar pledge to the twenty-five dollar bundle, and of course the higher tiers are usually fun too! Even if you can’t back a campaign or buy one of their books, you can share or tweet about these projects to your friends and followers.

On Indie Comics Showcase, we interview the creators, show off some art, and tell you how you can check out the product for yourself. Below we have another outstanding selection to feature this week for you to learn about, enjoy, and hopefully support by backing one or more of them! Thanks for being the best part of Indie Comics Showcase. Let’s jump in! 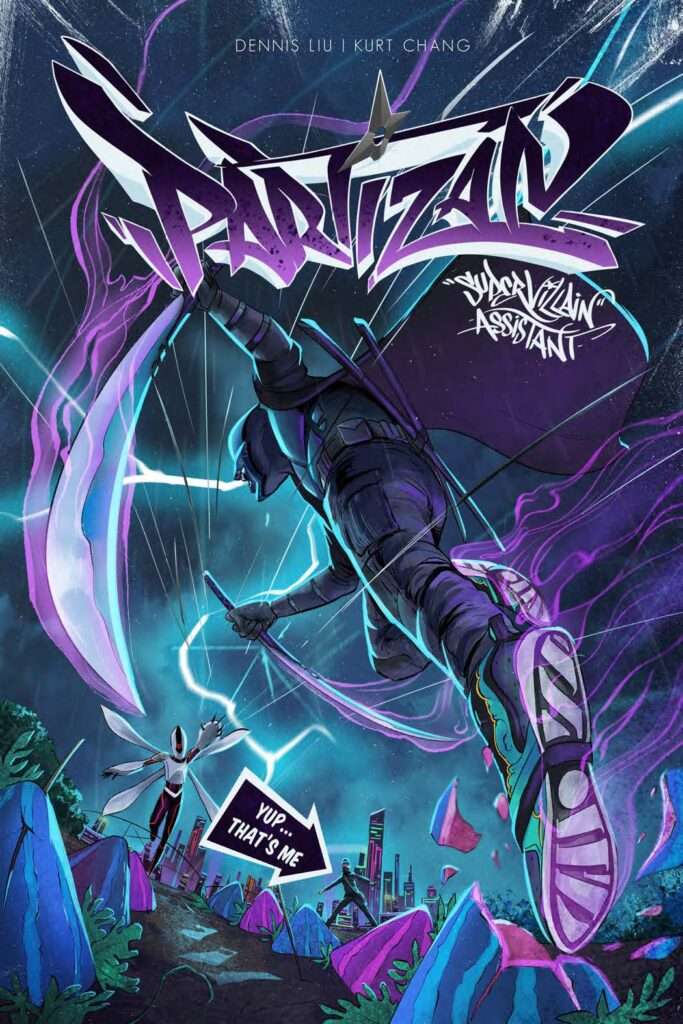 Chris Braly: Tell our readers your elevator pitch for Paritzan!

Dennis Liu: I always thought Jafar’s Iago, Gaston’s Lefou, and Hydra’s Henchmen were vastly underrated. They do so much to help their bosses, right? Like in Aladdin, would Jafar get genie’s lamp if it weren’t for Iago?? That sort of thing happens all the time in films – the overlooked second in command. So that’s where this story comes in — PARTIZAN — an Asian American supervillain series, told from the point of view of a villain’s assistant.

I love writing comics from a diverse and side character’s point of view. Partizan recognizes the power assistants have in organizations. Often passed over and underestimated, smart assistants are sometimes the most informed players in a company. So this is the story about JUSTIN JIN, the younger brother and assistant of a terrorist supervillain TAIHEI. Since Justin’s so good at his assistant job, his family assigns him to become a corporate spy, and things get complicated when he falls in love with his brother’s newest enemy, CEREUS. Justin is conflicted with pursuing the love of his life, while carrying out his brother and family’s commands to kill her. It makes for great drama, and a really cool comic. 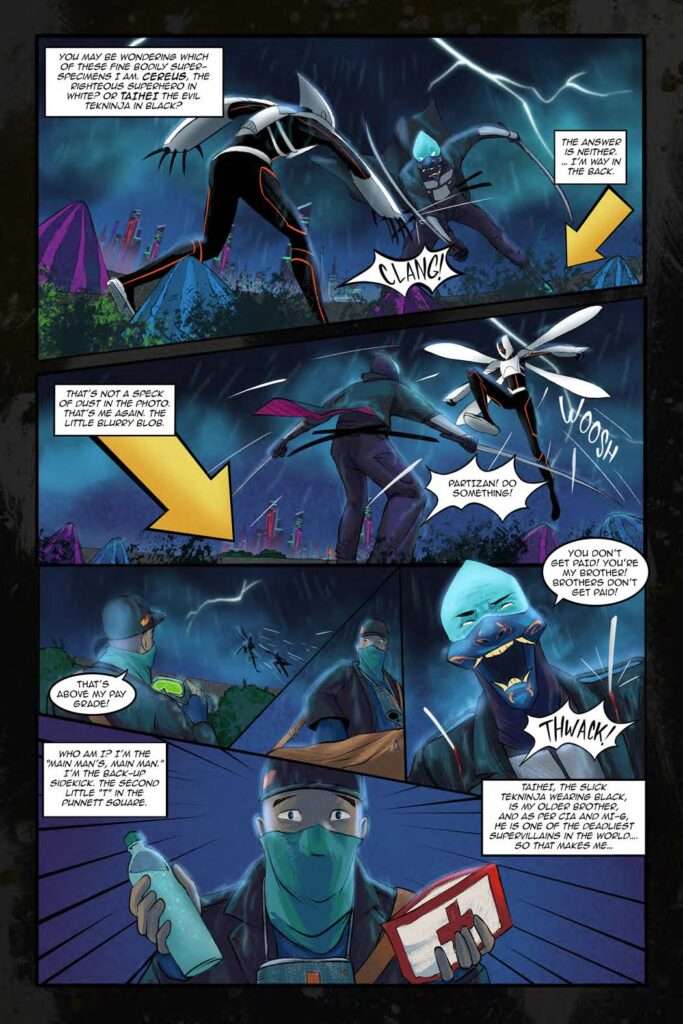 CB: Cool concept! It sort of reminds me a bit of Superior Foes of Spider-Man by Nick Spencer. What was the genesis for your project?

DL:  I still think we have a long way to go with Asian American representation in comics. Historically in film and media, we’ve been seen as “villains.” In boardrooms and in corporate America, we’re often overlooked for leadership positions and are dubbed second in command. There’s many papers written about it – it’s called the bamboo ceiling – the processes and barriers that serve to exclude Asians and Asian-Americans from executive positions on the basis of subjective factors such as “lack of leadership potential” and “lack of communication skills.” There’s a lot of “Asian Hate” going on out there since the pandemic began … and I wanted to challenge the idea of what a villain is.

This story touches a little bit about Japanese Internment camps and The Chinese Exclusion Act — these are things that actually happened. Obviously this is a fictional story, with superpowers and what not, but character motivations are based on things that really happened in US history.  I also love that this story explores farming as a major story point. I don’t think sci-fi has talked much about vertical farming and the advances in GMO and genetic engineering.   Drones are dispersing pesticides, robots are harvesting our crops – I think how food goes from farm to table is fascinating and changing rapidly. 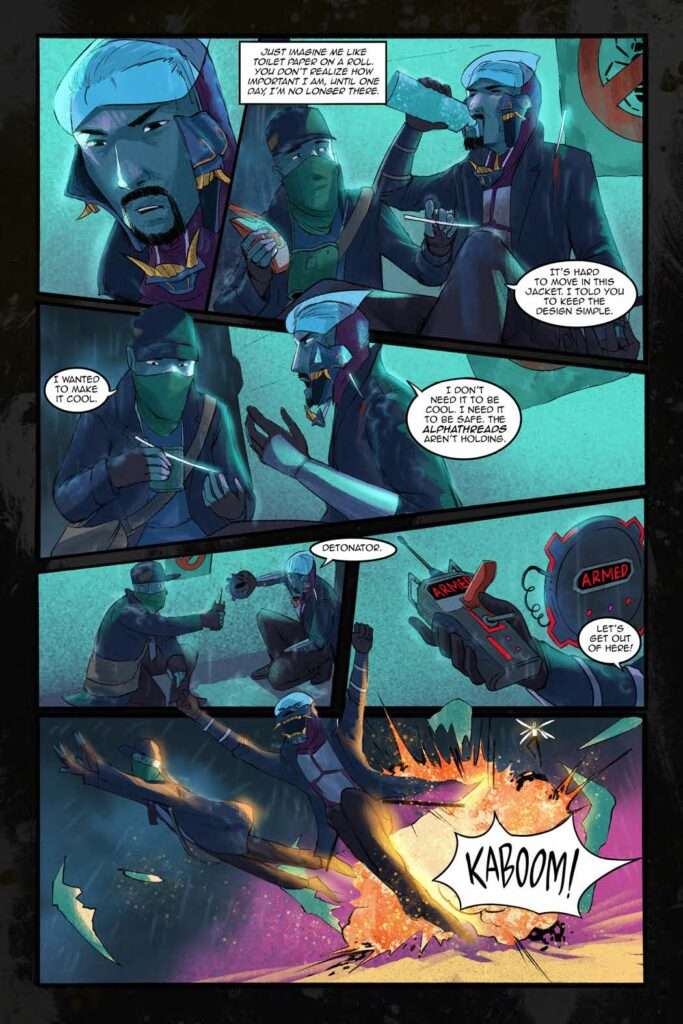 CB: Fascinating! What made you decide to self-publish?

DL: Kurt and I self-published because we got tired of waiting for publishers to get back to us. I think the tools are there to do great work, and you can go to market faster with your ideas. I’m tired of waiting for a yes. That being said, it’s an extremely crowded marketplace and you really have to have innovative work to stand out, and  That goes for the major publishers too. We’re all in the same fight for time and space for our audience. 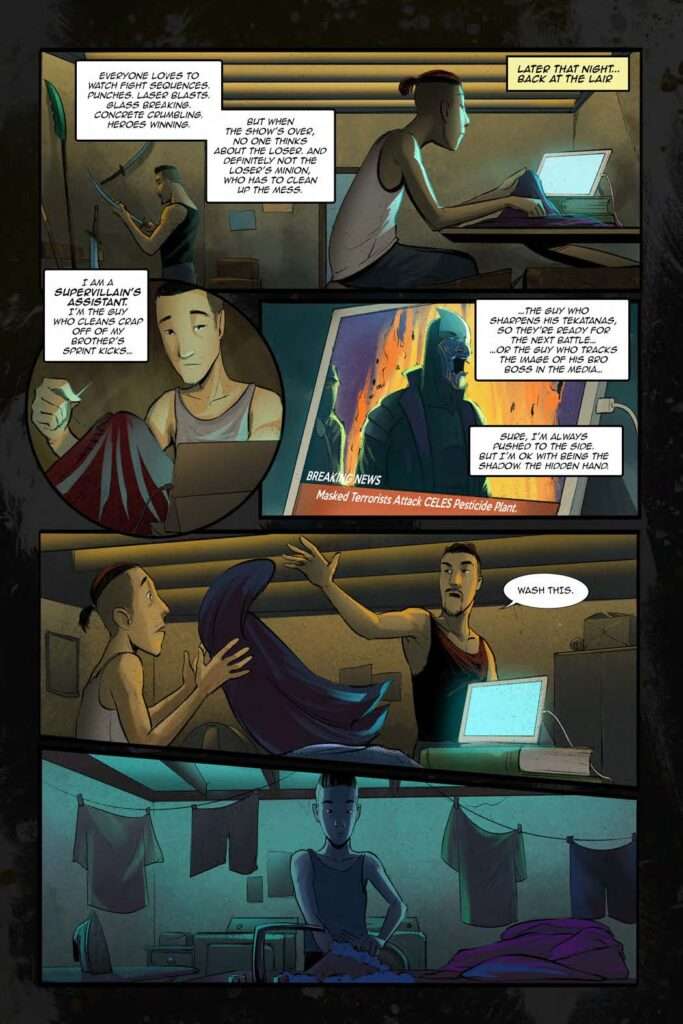 CB: Good for you! So what kind of comic fans are you aiming for, or rather who do you expect this comic will entertain the most?

DL: I think anyone who’s felt overlooked will love this story. Of course it’s Asian American, but this is a story about what it’s like to have a demanding boss. I hope other indie authors and fans look at me as someone who just keeps putting out content and it will work out. I mean RAISING DION started as an indie comic,  And Netflix took it straight to series. So it’s possible. But I think you need great art, a great story design, and a kick ass short film doesn’t hurt either. 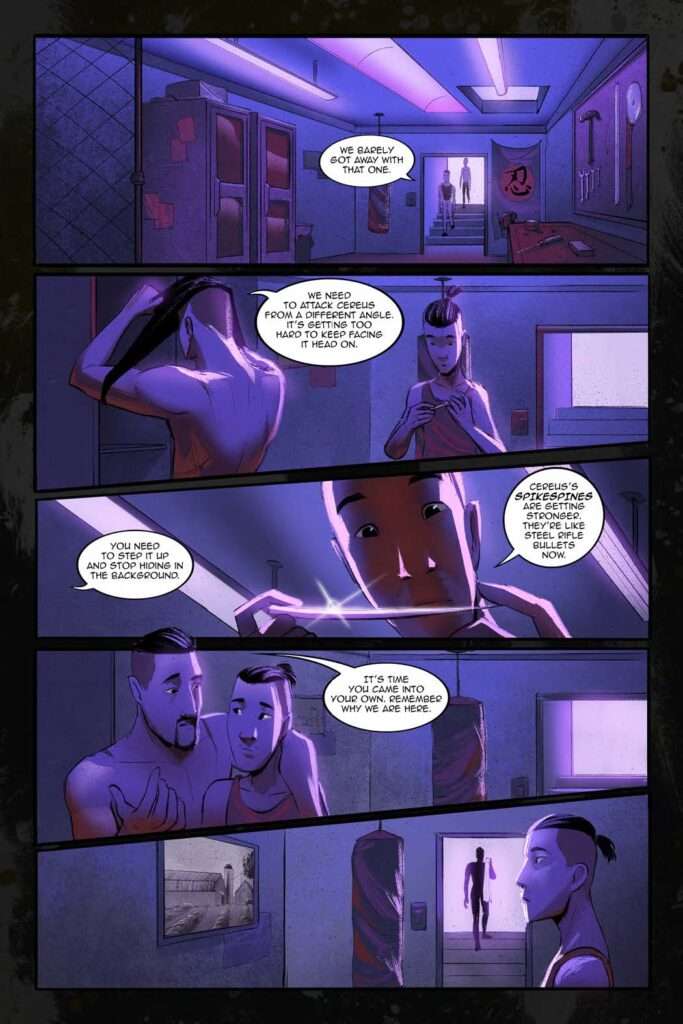 CB: Let’s get into the creative and production side a little. Tell us a bit about your creative team that have contributed to this project?

DL:  Like in my films, it’s important to have diversity both in front of and behind the camera. Kurt Chang illustrated these beautiful pages.  We would just do weekly calls and work on it. People don’t realize how long it takes to write even a 28 page book. Not only that, but the story has to make sense, with good hooks and turns.  I think it took us like a year. It’s crazy. I think each one of my indie books took a year. The story design takes a lot longer than people think. And the art of course, man  That’s really hard work too. Kurt is a saint. He does my storyboards for my films and commercials too, so we have a little bit of shorthand, which helps.  And he always picks up the phone no matter when I call. I wish all artists did that. That’s a plus! 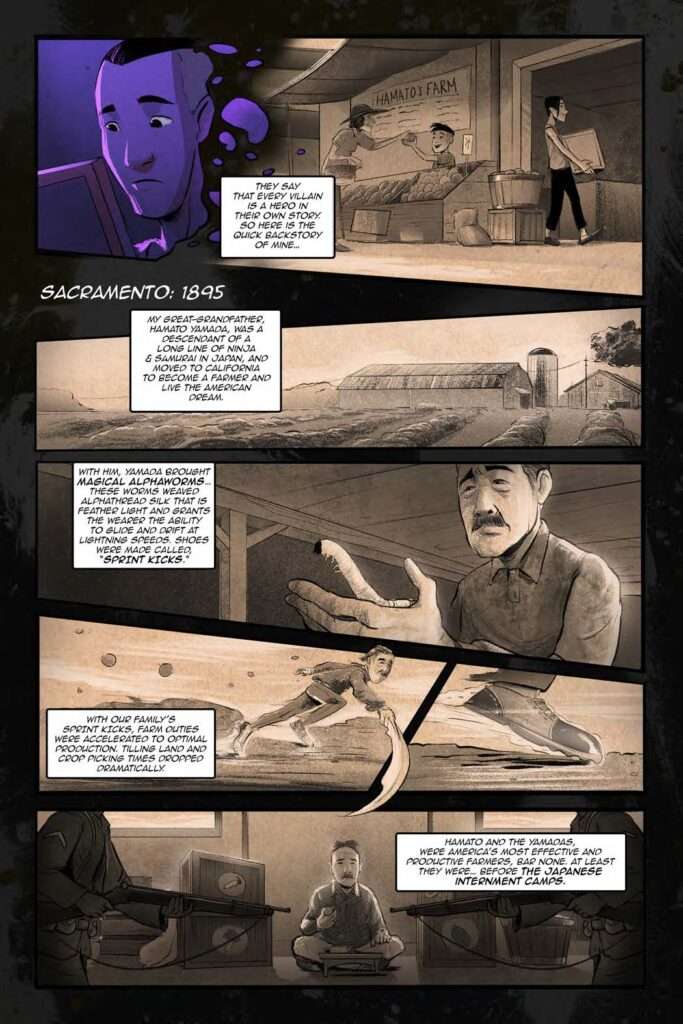 CB: Great sidekick. So how does this arrangement impact your workflow?

DL:  I write the comic and the panel instructions. I treat the first issue like a pilot of a tv show. I pick the wardrobe, I cast it, I pick the locations, and I pull tons of references. And Kurt goes off and draws it. I write character bios for everyone and try to design compelling conflicts between all the characters. I do a lot of research. So I did a deep dive in what I’m writing about.

For RAISING DION, I interviewed many African American single mothers. People sometimes wonder how a Taiwanese American dude wrote about an African American single mom, and I think it’s empathy, reading, and research. For PARTIZAN I read a lot about farming. Some of the genetics research on Raising Dion spilled over so that was useful. I think pencils are really important so you don’t make changes too late in the game. Get it all right early.

CB: What is your purpose for telling this story and what are your plans beyond this book? Are there more stories to tell?

DL:  We have a much longer series run. I’d like to do more! We’ve had an offer, which was exciting but it didn’t work out due to scheduling.  But there’s some great inherent conflict and storytelling here; I love watching characters squirm under immense pressure and challenges and I think moving forward it’s going to be fun seeing Justin juggle his family life and his life love and his work life. 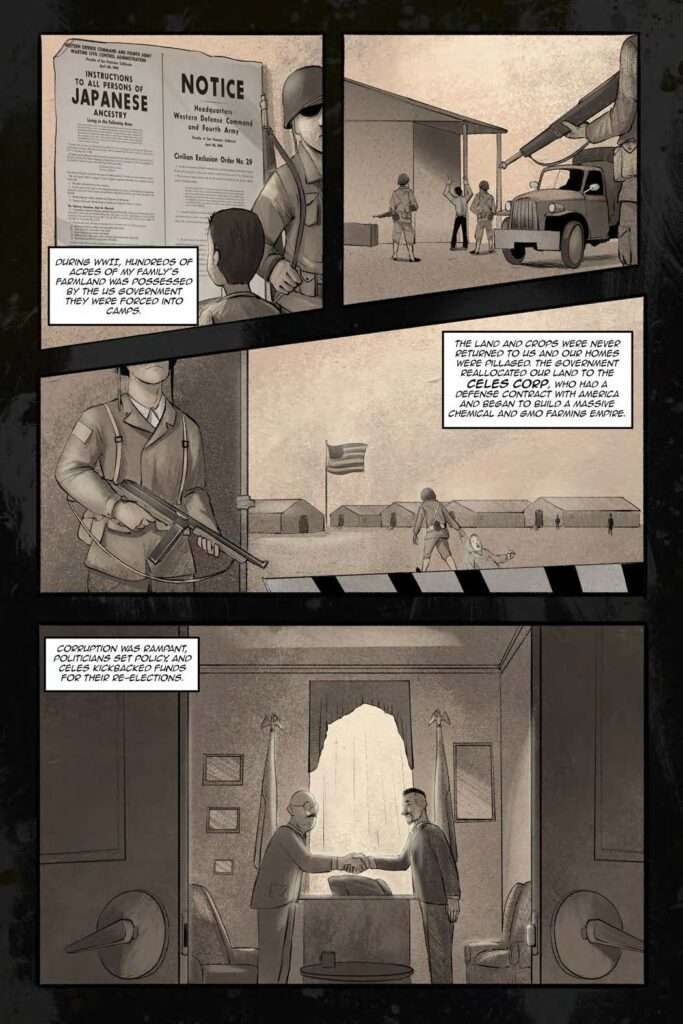 CB: What have you been learning from indie publishing and comics creation through this process?

DL:  Indie comics are challenging. I just love doing it. It’s like writing and directing music videos; I spent my 20s doing that, and it probably wasn’t the most lucrative thing, but it was so much fun.  I think marketing in indie comics is important. Blogs that support indie artists like Bleeding Fool is dope. We need more of that.

A lot of blogs are taking press releases from major media companies and are just publishing those instead of doing actual journalism. I’ve noticed that with streaming networks gaining more power — there’s been a bit of laziness with journalists. Where is the effort? Honestly — is that what running a good blog is? Just having PR contacts and publishing whatever they send? There’s all these complaints of a bottleneck of content coming from the major networks and studios — and we need better non advertising centered blogs to do good work and find the great indie gems out there. Blogs should not be run on clicks but they are slowly becoming all about that because of advertising. So I really appreciate Bleeding Fool still featuring projects like this. Because I know we need to diversify the content that’s being made out there or newer artists will never make it. 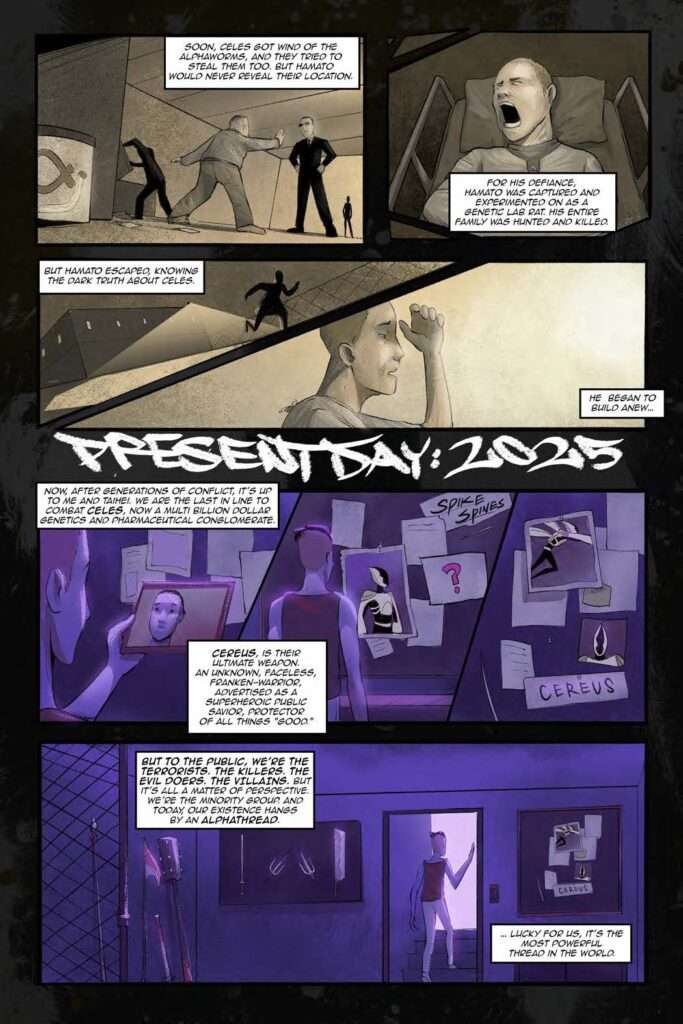 CB: Thanks Dennis. I’ve enjoyed the discussion. So how can readers grab a copy? I see you have digital books available. Will there be any physical copies available?

DL:  Right now we’re just digital, but hopefully we can move to tangible copies soon. Readers can grab a copy at my website: dennis-liu.com.

CB: Thanks for chatting with me, Dennis! Best of luck with Partizan!

DL:  Thanks so much!

That’s it for this week’s installment. Support indie comics!

Follow Indie Comics Showcase on Twitter at @Indie_Comics and reach out to them if you want us to consider featuring YOUR crowdfunding comic project! Or just drop us a line at contact@bleedingfool.com and request an interview for your indie comic.