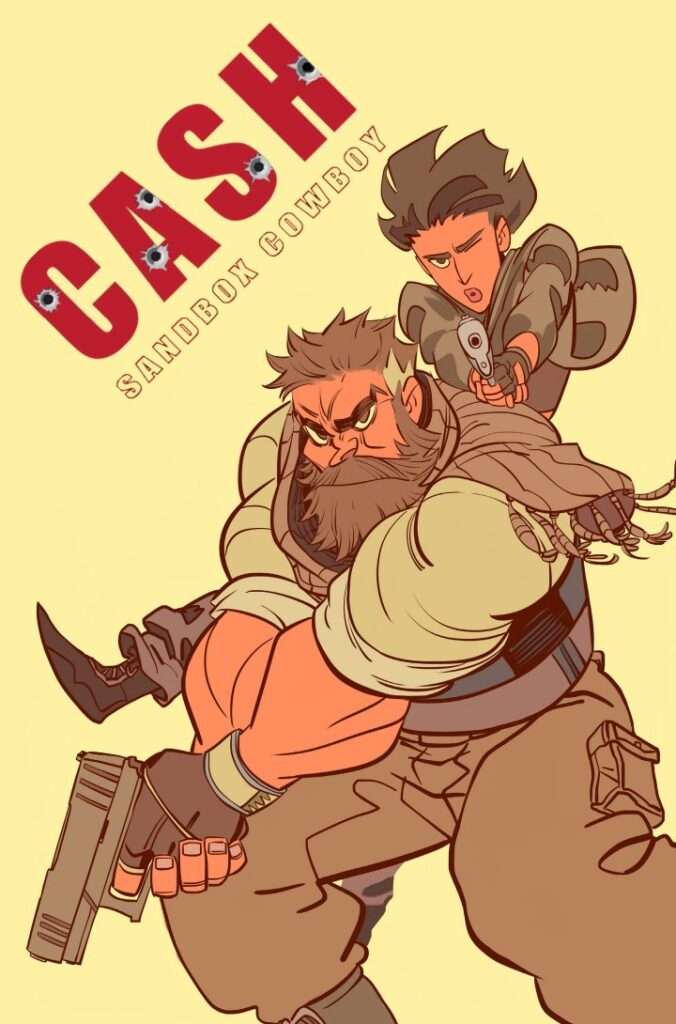 John Lemus: Thanks for being part of this week’s Indie Comics Showcase, Chad. Let’s chat about Cash: Sandbox Cowboy – your latest indie comic project with you.

Chad Halley: Thanks for the opportunity. I appreciate any chance I get to talk about Cash! 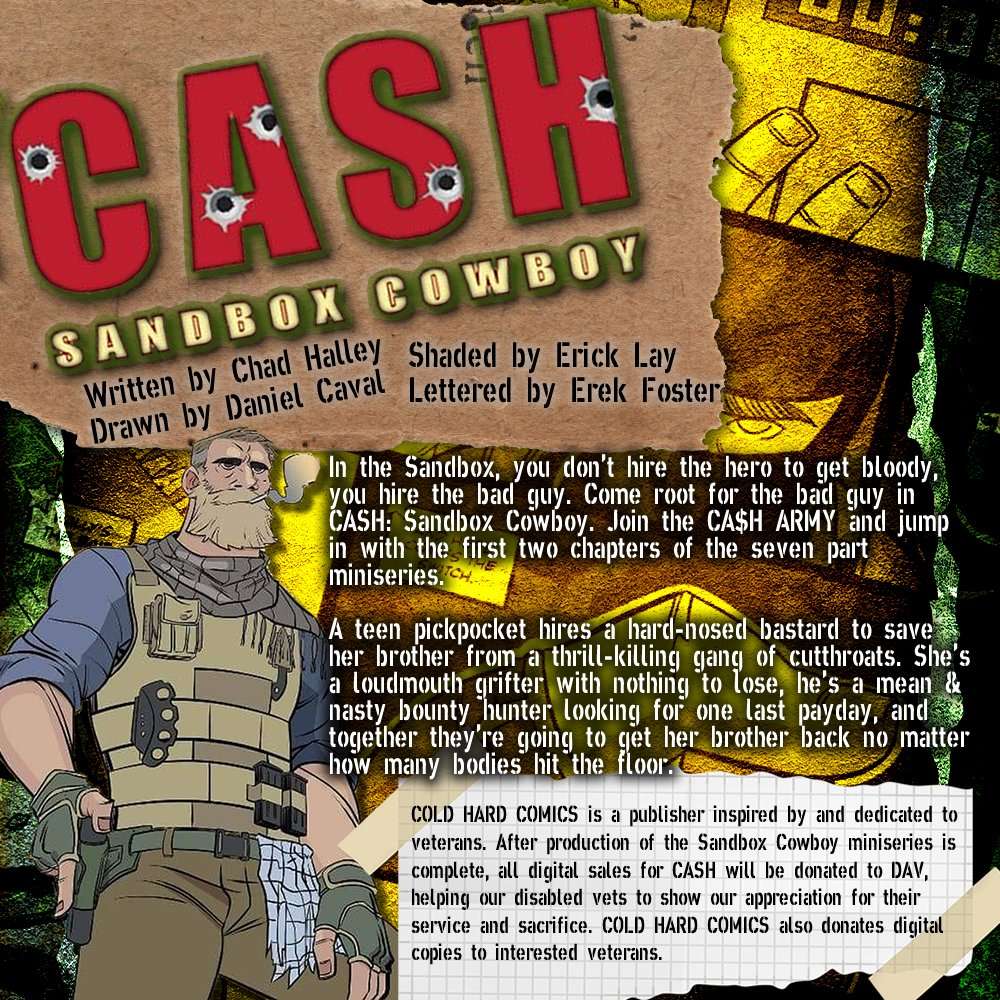 JL: Before we get started, introduce yourself to our readers, and tell us how you first got into comics.

CH: I’m a Rubber City rambler out of Akron, Ohio. Best two things to come out of Akron are me and LeBron. I grew up a smart kid from a poor family, my head buried in comics when I wasn’t trying to kill my brother. I don’t remember how I was first introduced to comics. I just know I’ve loved them for as long as I can remember.

By my 20’s, I was working in factories, the lumber yard, other enlightening blue collar gigs. My health took a dump on me and I ended up physically disabled, riding the 24/7 pain bus. Before I dropped out to focus on my love of eating and not being homeless, I had a college professor who really dug my writing. So, I started writing to deal with my crap existence. Eventually I realized I wanted to write comics, my first love. Here I am. 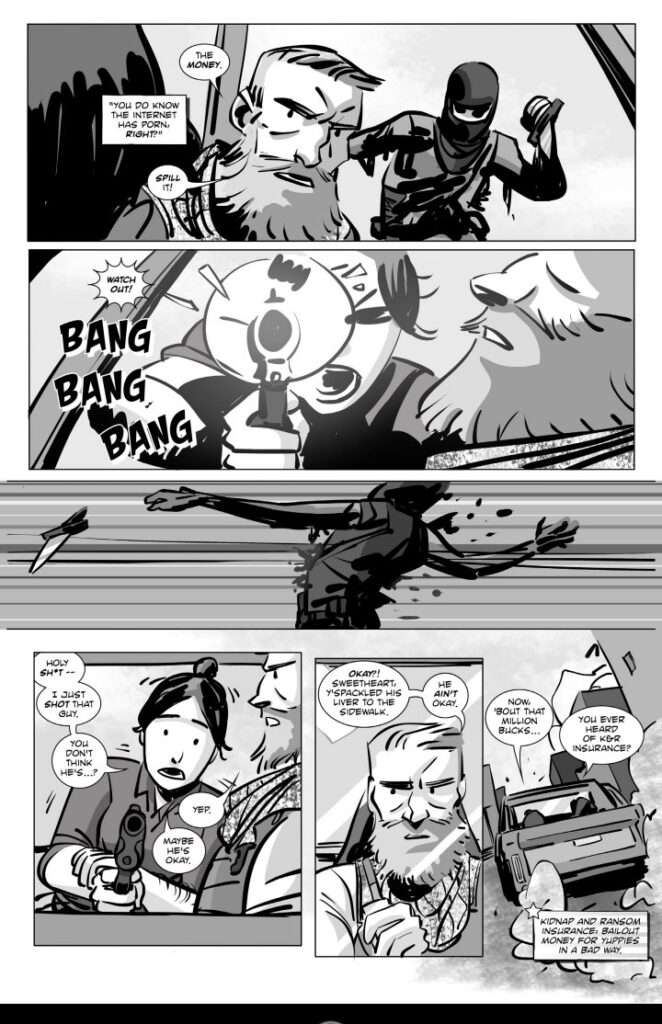 JL: Tell us the story without giving away any spoilers.

CH: A teen runaway, a street smart girl who survives by scamming and pickpocketing, comes to Iraq to find her older brother, a documentary filmmaker who’s been abducted by a nasty gang cutthroats who call themselves The Carnivores. She needs someone to help her and decides she’d rather that someone be a no good bastard who’ll get his hands dirty than some by-the-book do-gooder who won’t. In the SANDBOX, you don’t hire the hero to get bloody, you hire the bad guy. CASH is the bad guy. He’s the anti-antihero. Just when you think he’s going to show that creamy center below his gruff exterior, he spits in your eye. 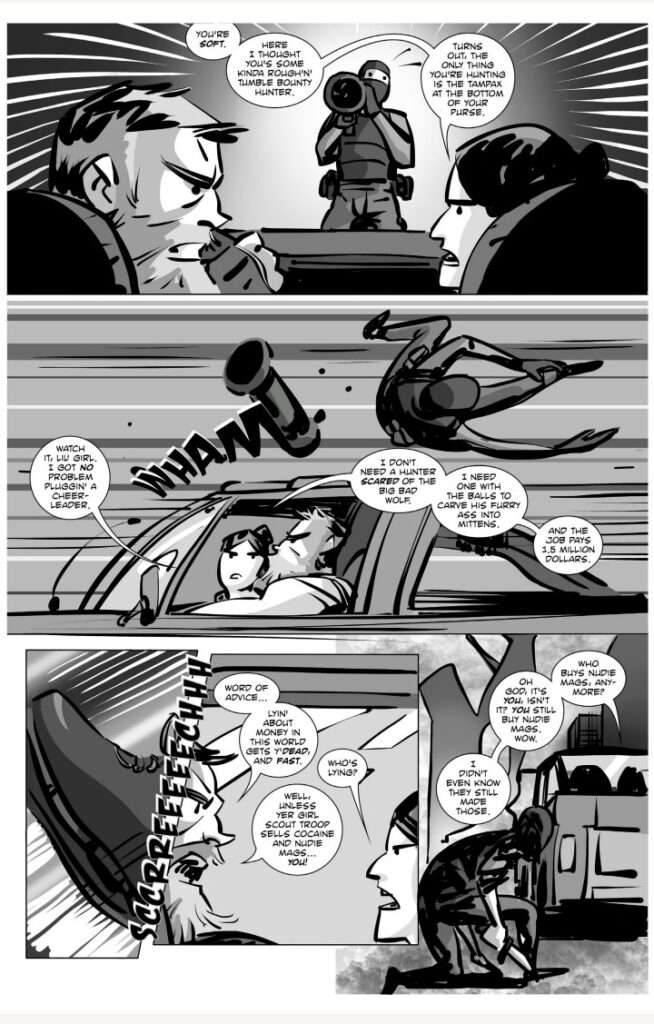 JL: How did you come up with story idea and your characters?

CH: Your mind really wanders in labor jobs. Mine used to wander in imaginary worlds. I used to imagine a world where all my favorite characters from the Westerns coexist. Imagine Rooster Cogburn hanging out with Butch Cassidy and the Sundance Kid. Hannie Caulder’s there too, along with the Magnificent Seven and the man with no name.  I dreamt up this story, the CASH story, including all those characters. Then I heard a veteran describe the “Sandbox” as the wild west, and that in ways it felt like they were playing cowboys & indians over there. Suddenly that story in my mind was happening in the Sandbox, in the backdrop of the war in Iraq. 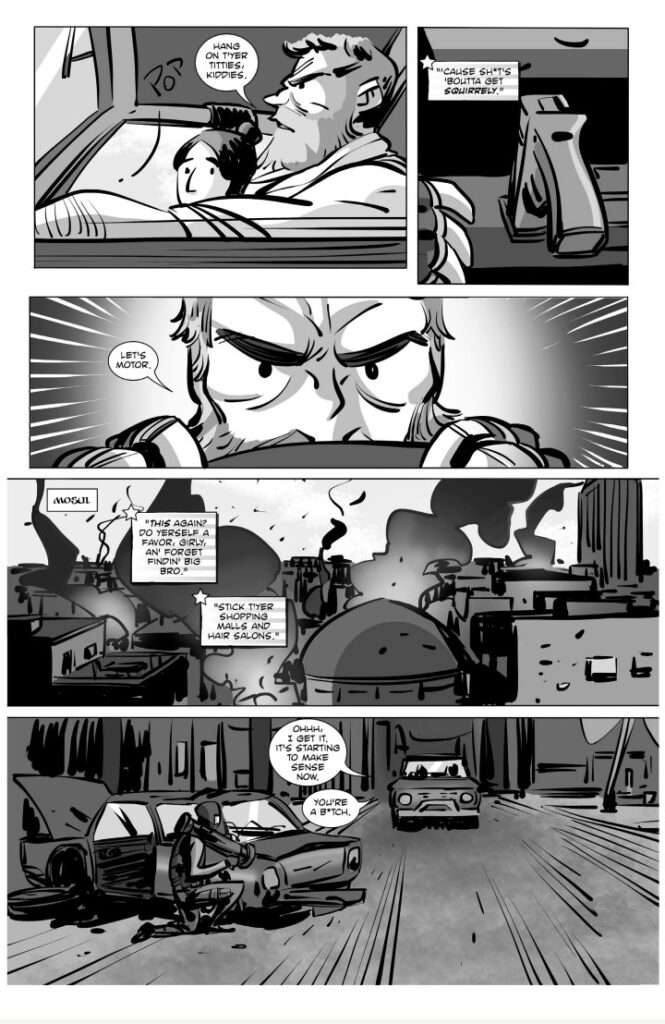 JL: Are there any comic creators who have inspired or influenced you, if so, how?

CH: I’m a Claremont guy. The Sin City stuff rocked my world. Surprisingly, two of my biggest influences in my comic writing is Tarantino, a filmmaker, and Elmore Leonard, the novelist.

JL: Cool. Tell us about your style, your creative process and how you developed them?

CH: My style is abrasive, cut you to the quick, and funny. That’s what I’m trying to do, catch your attention, knock you off balance a little, and have some fun. That developed naturally because it’s also one side of my personality. I’m a Gemini. You either love me or hate me, and this book is the same way. 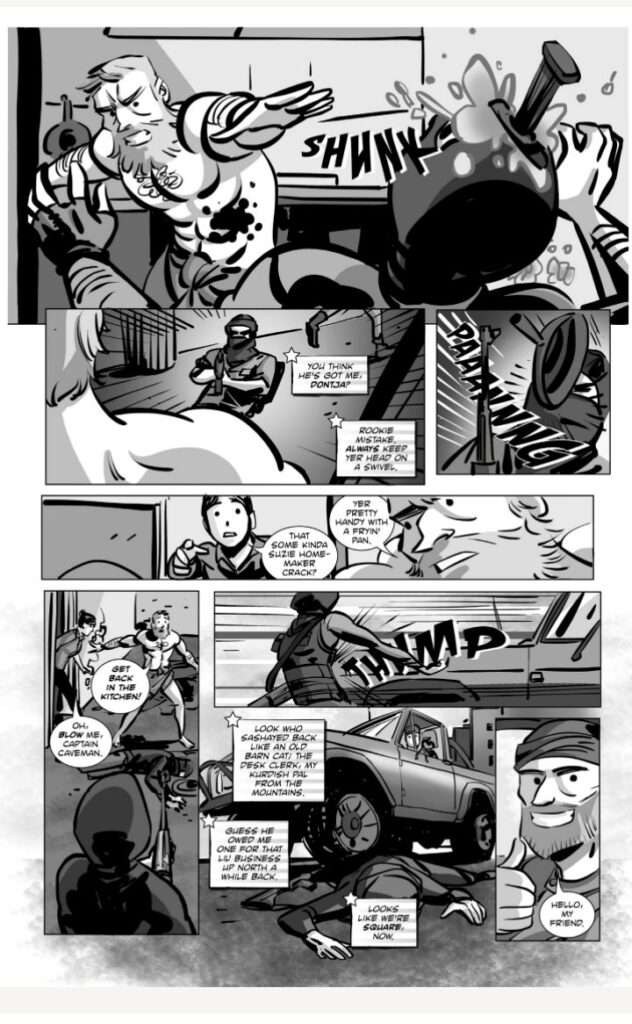 JL: What are your hopes for the project and for readers who pick up the book?

CH: Just have fun. Saddle up and take a ride with these characters, no strings attached. Right now we’re on Kickstarter for CASH part 1&2. CASH is a seven part miniseries, one overarching storyline that we’d love to have completed and in readers’ hands by the end of 2022. I think CASH might be retired after that, but there may be a few more CASH stories in the ol’ noggin I could pry loose if folks wanted ’em. We’ll see. 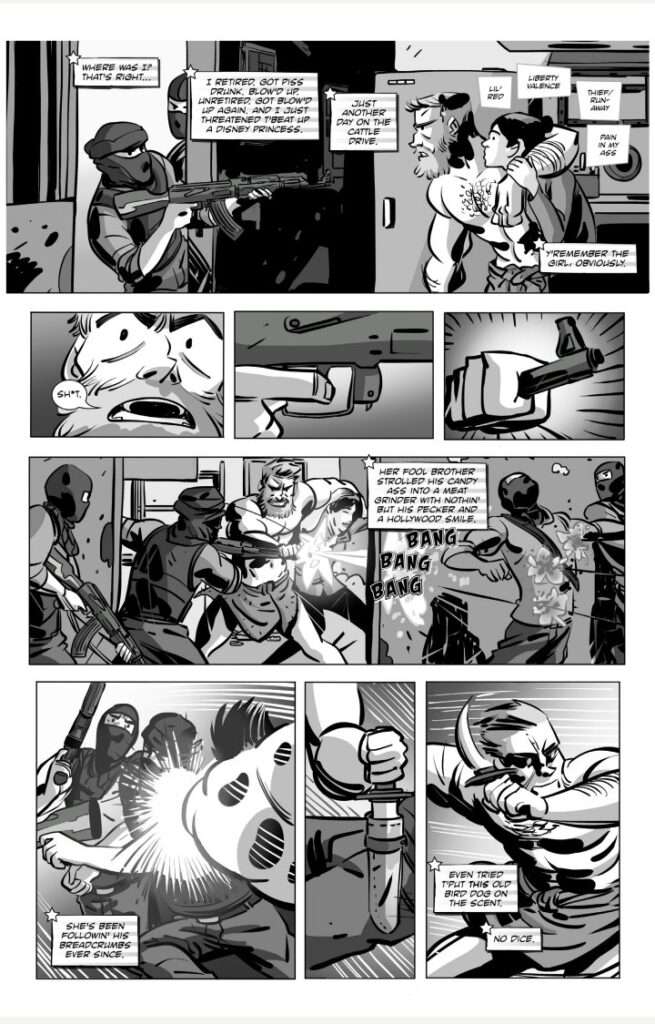 JL: What do you think is most important when working on a comic?

CH: For a writer:
1.) Figure out your dynamic with the artist and the letterer. Get on the same wavelength if you can.
2.) Find the joy in the mundane.
3.) Be yourself unapologetically. Unless you suck, then be someone else. 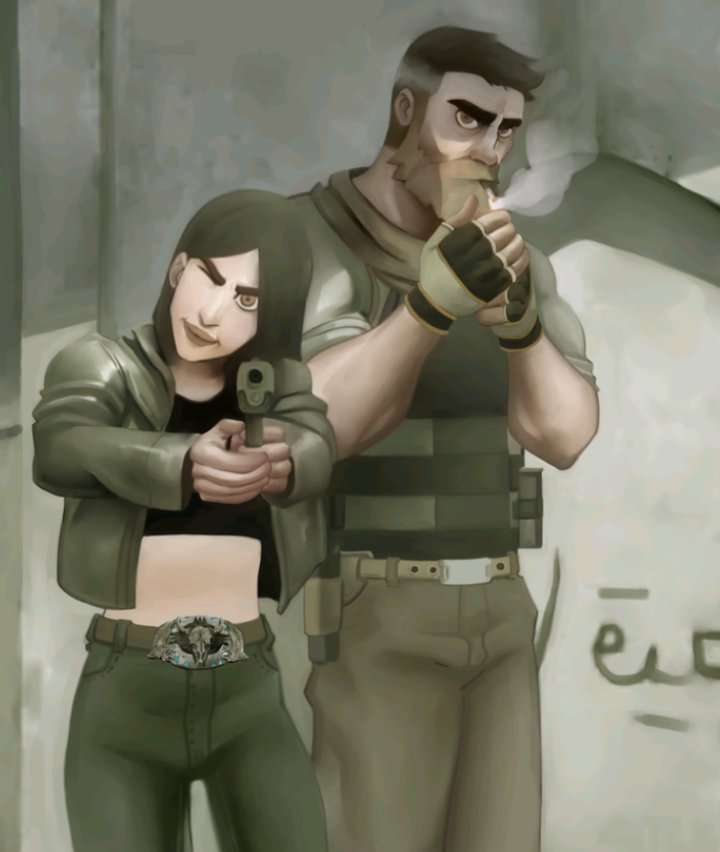 CH: Cold Hard Comics is inspired by and dedicated to veterans. After the Sandbox Cowboy miniseries is produced, all digital sales will go to vets in perpetuity. Our Kickstarter is LIVE right now; back the book and help some vets. It don’t get no better than that. If anyone wants to sample the comic, they can read the first issue FREE and see if CASH is your cup of TNT. CASH Vol. 1 is available FREE digitally at gumroad.com/coldhardcomics

JL: Wow! Thanks again for being a part of Indie Comics Showcase, Chad. Best of luck with Cash: Sandbox Cowboy and any future projects.

CH: We appreciate the opportunity to talk about CASH and shoot the bull about comics in general. So thank you.

Tweeter and the Monkeyman (Issue 71) 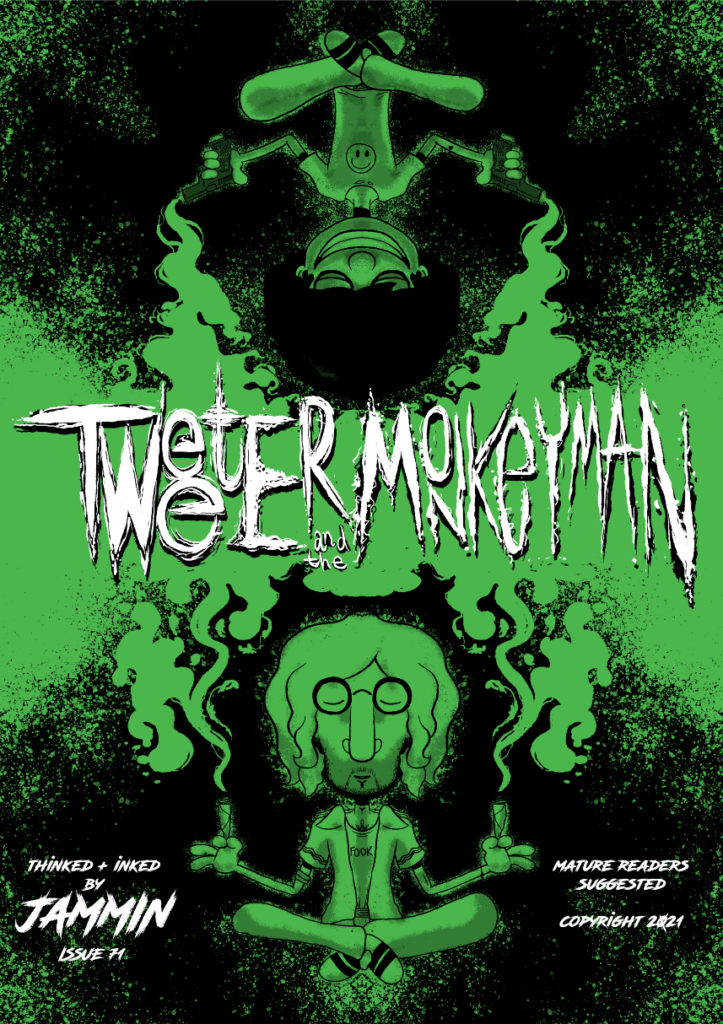 You can grab a copy on amazon

John Lemus: Welcome back to Indie Comics Showcase, Jammin! I see Tweeter & the Monkeyman is up to issue #71. Wow! Haha, what’s changed since we had you on the first time?
Benjamin (Jammin)  Wigmore: Good to be back, John! Well, I started off drawing comics as a result of the 2020 lockdown but now the world is a little more back to normal and the sensible folk amongst us are double jabbed, comics drawing has become something I do in my spare time. I became a Dad in February 2021 so I have less spare time than before. I started TM #71 in September 2020 and finished August 2021 but obviously I wasn’t drawing it all that time. At one point I had 15 pages and I just stopped… It was really weird. Then I took a small break, re-wrote the rest of the comic and ended up with 30 pages which is a fucking miracle to be honest! 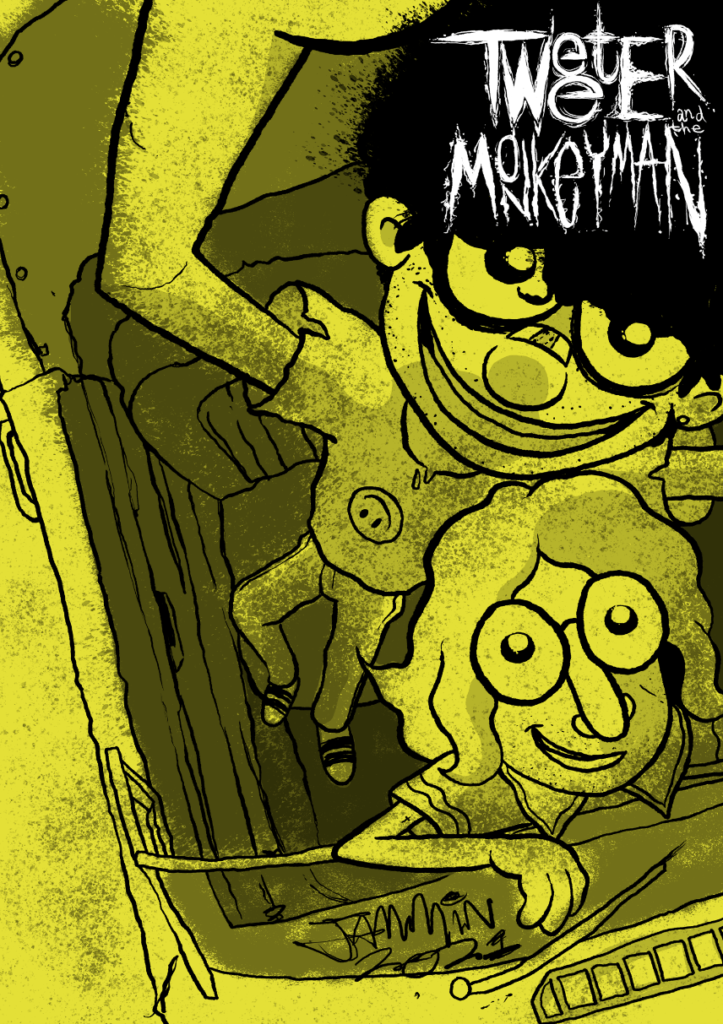 JL: Without Spoilers, what can you tell us about TWEETER AND THE MONKEYMAN? Where it’s been, where it’s going, and your plans for the future?
BW: The first comic was extremely angry, violent and with a lot of swearing. This issue is more laid back in places and I actually made an effort to make the characters likeable. I use flashbacks to give you more of an idea about Tweeter and the Monkeymans past. You get to see their experiences in the Vietnam War and how they were as youngsters. 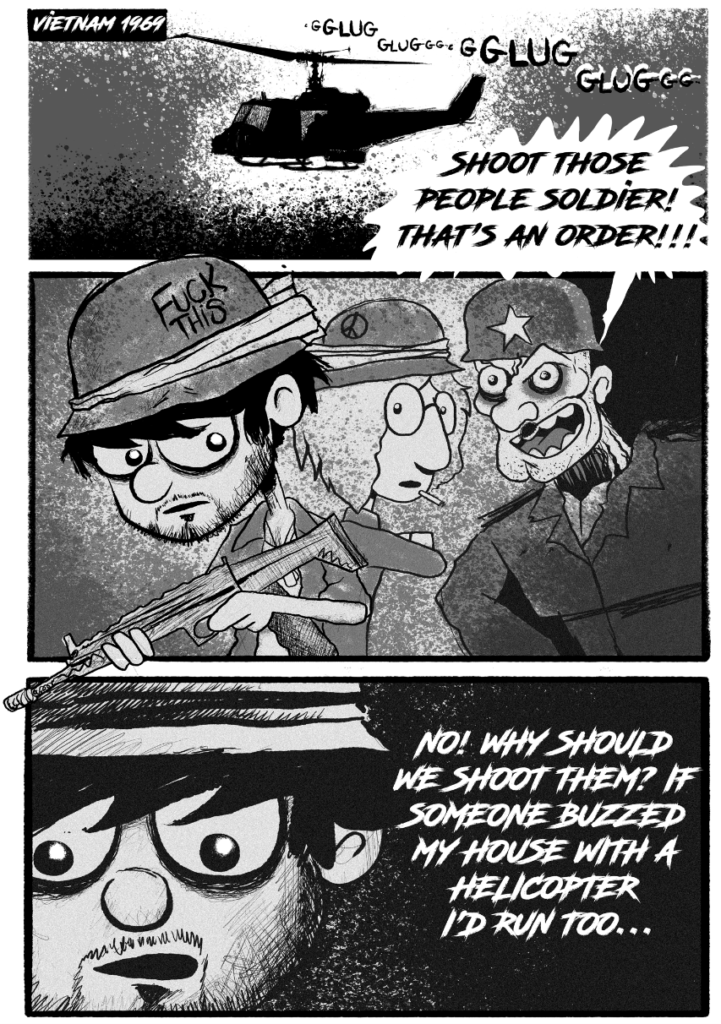 JL: Can you tell us a little bit about how you tackle each instalment? How do you keep the story fresh and interesting?
BW: I’m not worried about planning too much in advance. I don’t really have time… I don’t really write a lot of the story down. It’s all in my head, and I tackle each page and try to make it as interesting as possible. I’m trying to have fun with this and not make it stressful. As far as drawing style goes I don’t worry too much about a consistent style because anything you draw over the course of a year is going to alter from page to page. 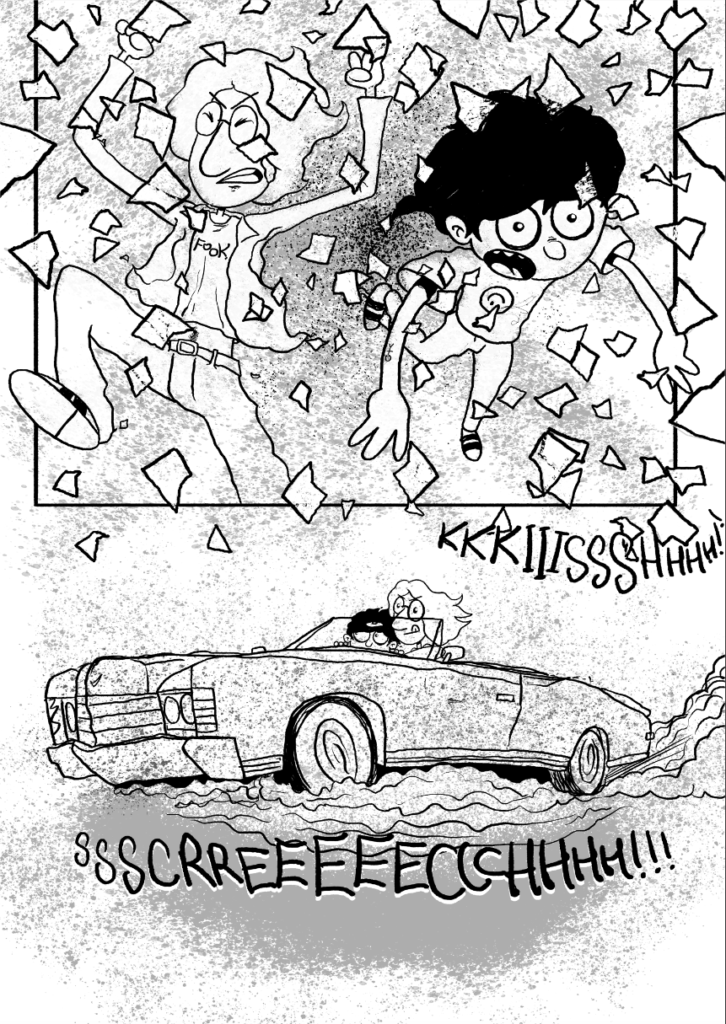 JL: Can you tell us a little bit about how you tackled this campaign as compared to your previous ones?
BW: As I said I got to 15 pages and just stopped for a while. It was strange, I’m pretty sure work and the birth of my son had something to do with it. 😀
JL: Have you been reading any mainstream or indie comics recently?
BW: Not really if I’m honest.  Being a Dad takes up quite a lot of my time. 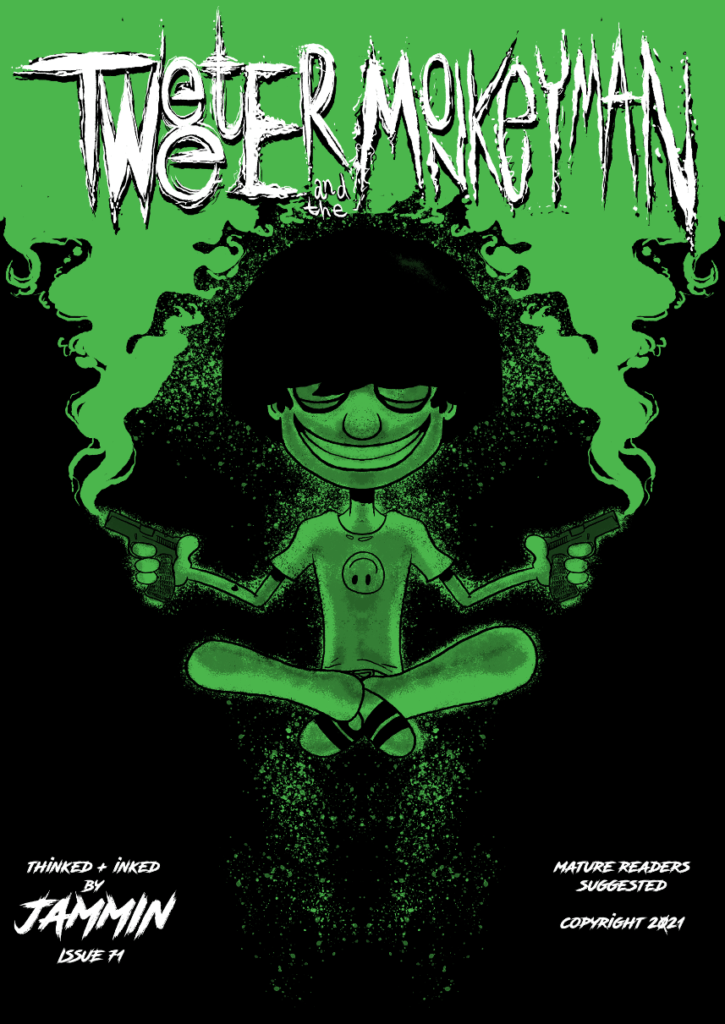 JL: What are your hopes for TWEETER AND THE MONKEYMAN in the future?
BW: I’d love to do another TM comic of TM. Who knows? Because I decided to tell the TM story out of order I could go all the way to the end. 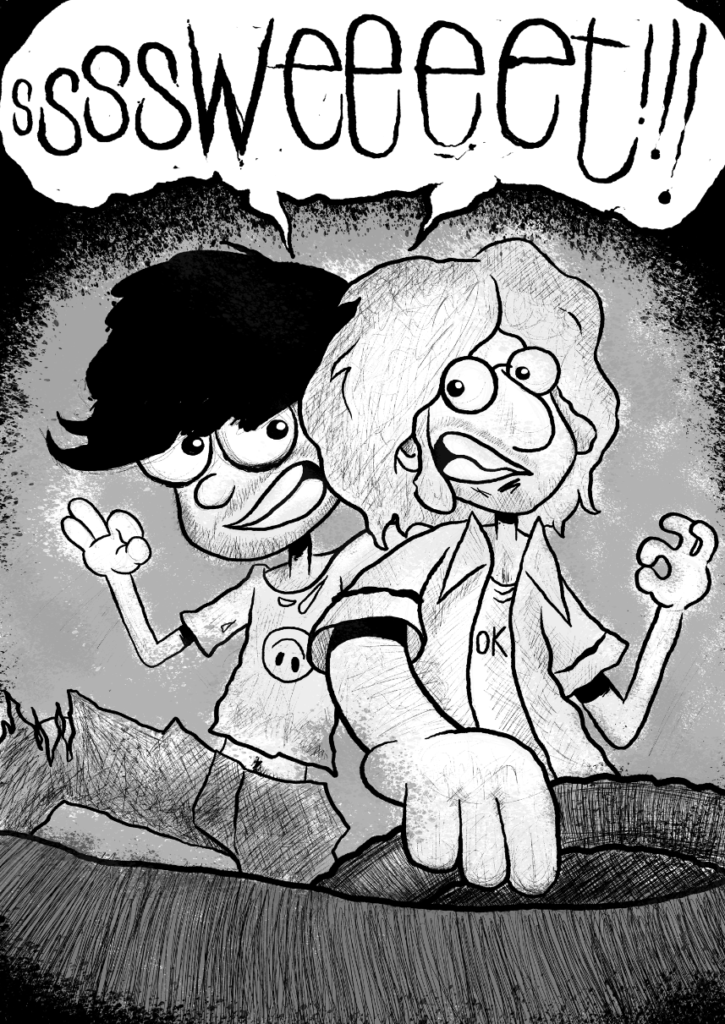 JL: Is there anything else you want to share with us before we sign off?
BW: I have an art book on Amazon called Eyemann Cometh that I didn’t promote much when I published it, but I’d like to mention it here. People can check that out. It’s super weird! I’d also like to say a big thank you to the love of my life Sophie. She is awesome! 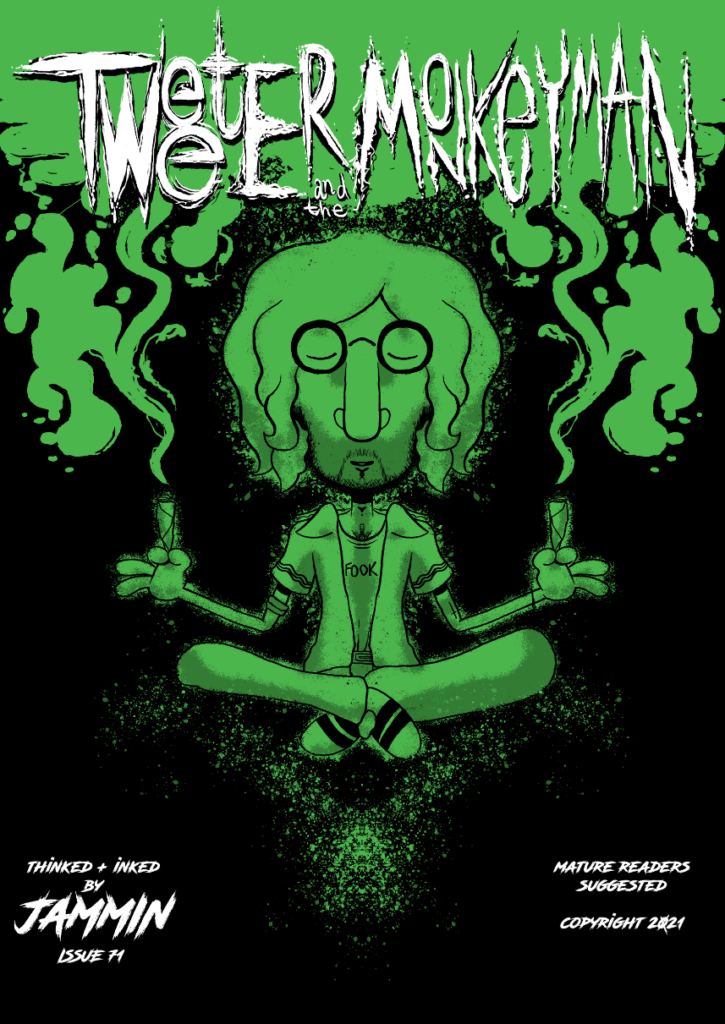 JL: Once again, I’d like to say thank you for being a part of Indie Comics Showcase. Best of luck on the latest campaign!
BW: Thanks John!

You can grab a copy on amazon

Follow Indie Comics Showcase on Twitter at @Indie_Comics and reach out to them if you want us to consider featuring YOUR crowdfunding comic project!