As 2022 draws to a close, IDW will bid farewell to its long-running series of G.I. JOE comic books with the publication of G.I. JOE: A Real American Hero #300, written by indispensable visionary Larry Hama with art by legacy fan-favorite contributor SL Gallant, inks by Maria Keane, colors by J. Brown, and letters by Neil Uyetake. The final, overlength issue of the IDW comic will be published in November, and one of its sensational cover variants—illustrated by Jamie Sullivan—sets a new world record for the most characters featured on a comic book cover!

G.I. JOE: A Real American Hero #300 marks the culmination of a culture-shifting 40-year franchise helmed throughout by industry legend Hama. Nearly every issue of the original 155-issue run was written by Hama until Marvel Comics ended publication in 1994, and when IDW acquired the license 15 years later, Hama was welcomed with open arms to continue the storyline right where he left off!

Hama, who was recently recognized for his lifetime of achievements as an inductee of the Will Eisner Award Hall of Fame, was emotional as he looked back on the 40-year legacy of the series, which has been guided and shaped from its inception by Hama’ own indelible contributions:

“I handed in the plot to G.I. JOE: A Real American Hero #300, which is the final issue of the series for IDW, with a mix of sadness and amazement. Sad, that a storyline I began in 1982 is coming to an end, and amazement that it has lasted this long. “Back in 1982, it was common knowledge that a toy licensed comic lasted one to two years at the most, and toy companies were reluctant to let a series based on a toy line run longer than three years, lest they get stuck with warehouses full of unsaleable Cabbage Patch Dolls or Beanie Babies. Every year that G.I. JOE and Transformers made it to the next season seemed miraculous.

“I remember finishing the very first G.I. JOE story, and thinking to myself that that was it, those were all the ideas I had. I had no clue what to do for the next issue.

“So I did what I’ve been doing now for forty years: I jumped into the deep end of the pool and wrote page one without any idea about what would happen on page two. Then I slogged ahead, page by page, until I got to the end.

“I’ve never been concerned about ‘plot’ or ‘continuity.’ Most of G.I. JOE is a long, continuous ret-con. My main concern has always been the characters, getting them to stand up and walk around inside their own universe. My second concern is visual storytelling—making sure the story is carried along in an impactful way by the succession of images. The words always come dead last, and that’s why I don’t identify as a ‘writer,’ but as more of a ‘penciler with a word processor.’

“I did 155 issues at Marvel, and they pretty much gave me free reign to do what I pleased. When IDW got the license, they wisely chose to turn me loose with my own methods, and I happily produced a run that is only five issues short of my Marvel run. The editors and staff at IDW have been incredibly understanding and supportive. In particular, they’ve been highly respectful and considerate of all my odd working methods and peccadillos. I’m thankful to all of them. Now, however, I have come to the end and it truly feels like leaving home, leaving characters that have been my friends for four decades—many of which are, in fact, based on my actual friends and acquaintances—and I can feel a real emptiness looming.

“Somehow, though, I suspect the story doesn’t completely end here, that the story will go on and the PIT will not be in mothballs for long. See you in the next incarnation!”

In the bombastic conclusion to IDW’s G.I. JOE: A Real American Hero, Cobra is on the verge of creating its deadliest army ever by resurrecting both dangerous villains and heroes. Will the warriors of G.I. JOE foil their archenemy’s evil machinations before it’s too late? Or will the devious Revanche robots have the last word over both the Joes and Cobra?

“Issue #300 marks a milestone for a property that has been an enduring cornerstone of nostalgia for many, many fans,” says Gallant. “From the start, my goal was to create new books that felt like lost treasures from the original run, continuing the adventure for devoted, long-time fans while also working to expand the universe so those fans would enjoy sharing these stories with their own kids. The fight for freedom hasn’t ended—G.I. JOE is still here. Yo, Joe!”

“I recently finished a 100-issue run writing IDW’s Teenage Mutant Ninja Turtles, and whenever folks ask me how it felt to write all those issues, I just smile and humbly remind them that I edit for Larry Hama on G.I. JOE. 100 issues is a neat feat, but 300 issues? That’s Hall of Fame-worthy, my friends,” says IDW Group Editor Tom Waltz. “It’s been an absolute honor and privilege to be even a small part of Larry’s phenomenal run, and I couldn’t have done it without Diana Davis, our ever-faithful Research Specialist who helped keep the series firmly positioned within the proper continuity lanes that comprise the expansive canon which Larry has built over the years.”

In honor of the final issue, A Real American Hero #300 will feature a record-shattering cover image by artist Jamie Sullivan that pays tribute to the scope and impact of the 40-year-old franchise. Sullivan’s cover sets a new world record, featuring a total of 313 unique, named G.I. JOE characters together in a single image. 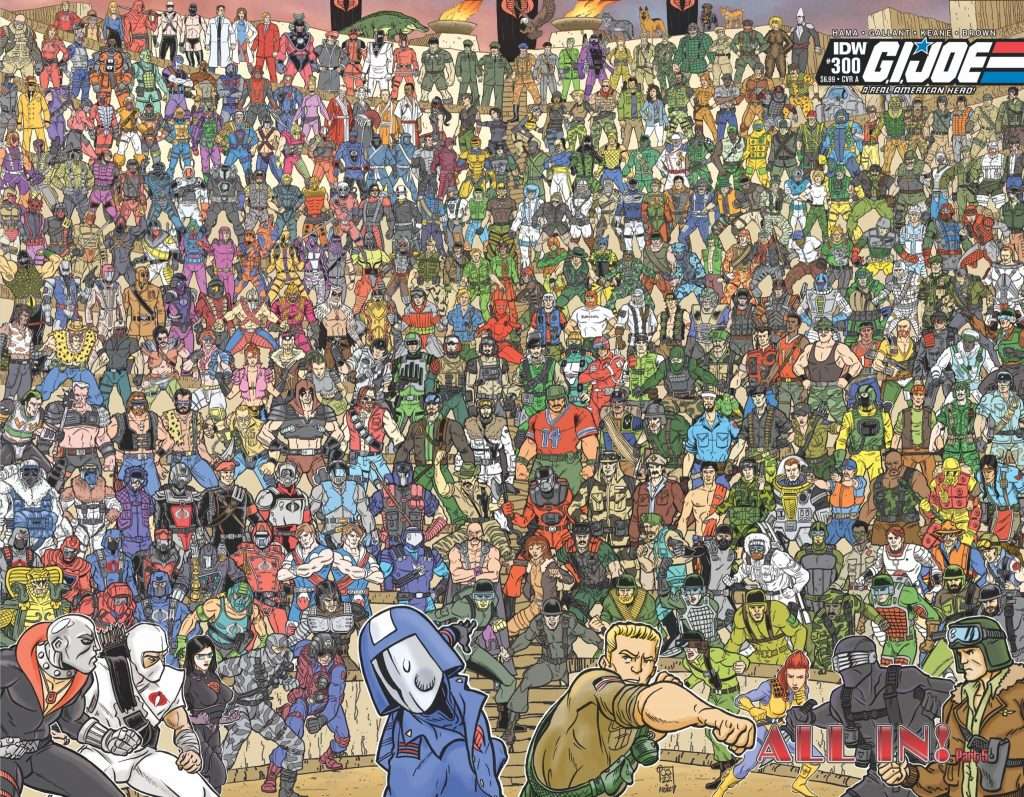