Sequential art has had many faces throughout the ages. After oral communication, this graphical way to express ideas is the oldest used by our ancestors and ourselves. Evidence of this are the Chauvet-Pont-d’Arc cave paintings in southern France, dating from between 32, 000 – 26, 000 years.

Even today—in a rather discrete fashion—this art form is part of our daily routines. For example, we see it all the time in the infographics in airplanes and buildings. These safety materials work in just the same way older informative books did, like medieval medicine tomes. Not many people could read properly back in the day and visual information has always been the easiest way to reach human brains efficiently, our species is very good at figuring out these ideogrammatical abstractions called “cartoons.” 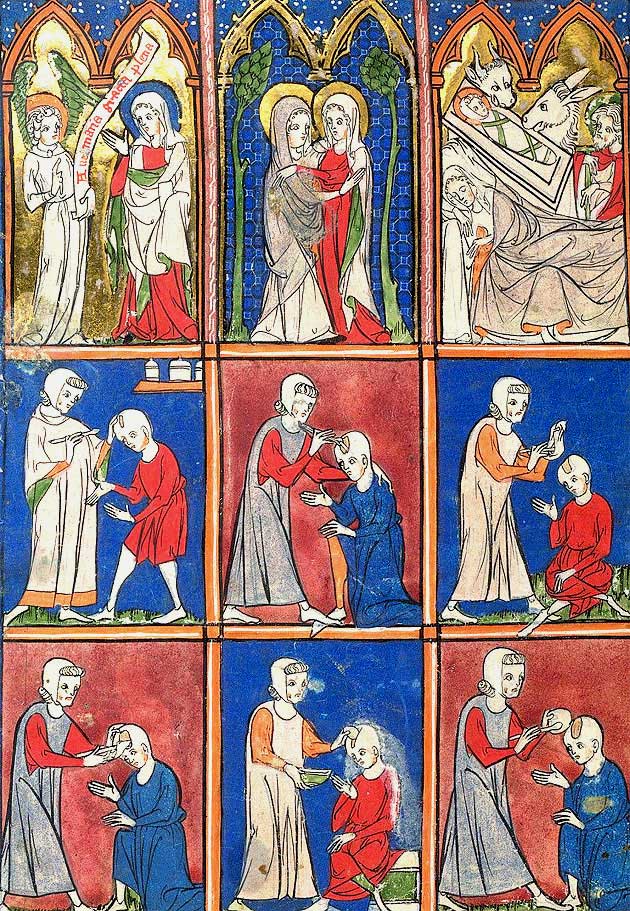 There are plenty of schools of thought about this, for this article I’m going to consider a “modern comic book” sequential artworks created with the intention of making an aesthetic experience to entertain the reader, setting the table for the strip composition, the magazines and the compilation books we enjoy today.

This publication has been proclaimed by many sources “the oldest comic book of all time” since it was first published in 1825 by William Heath. The Glasgow Looking Glass certainly was a political cartoon magazine and quite possibly the oldest example know of this kind of periodical, but it lacked sequential art. It didn’t really have panels, but unrelated illustrations depicting the Scottish society back then. When it changed its name to The Northern Looking Glass with the fifth issue, a “Litho Album” subtitle was added to its name, hinting at how it was planned & produced. It was a collection of memes just like the ones we see all the time in our social media, probably the very first one. 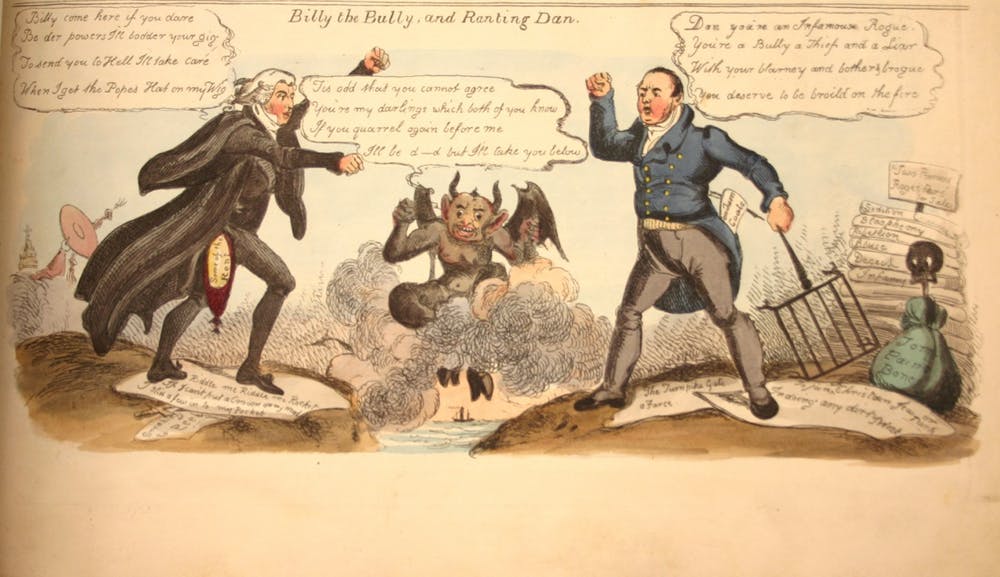 It’s important to acknowledge this publication because even if it didn’t have the essential ingredient of comics, it did bring to the table the very first formal word balloons in a magazine. It probably took hints from religious art like the one found in John Foxe’s The Actes and Monuments, a 1563 martyrology treaty with very narrative engravings which included speech banners that completely mirror the role of lettering word balloons & caps in modern comics today. This text was almost as popular as the Bible itself among UK protestants back in those days. 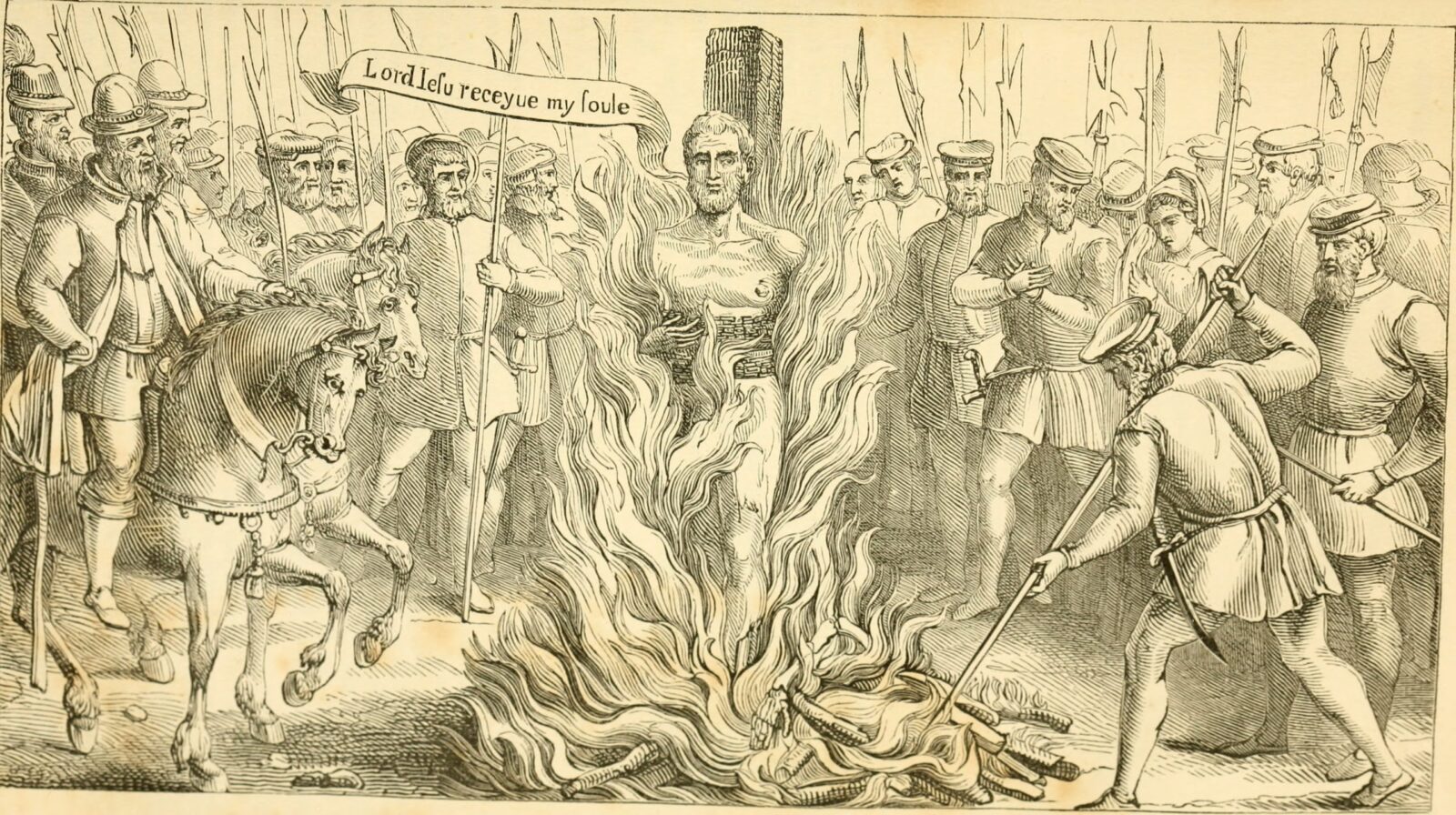 Johann Wolfgang von Goethe, the celebrated author of The Sorrows of Young Werther and Faust, had a Swiss cartoonist friend who loved entertaining his social circles with little sequential stories. His name was Rodolphe Töpffer, a Paris-educated teacher who ran a boarding school in Geneva. Goethe and other acquaintances, such as the boarding school students, convinced Töpffer to publish these comic strips of his in 1831. This was finally accomplished in 1833 with Historie de Mr. Jabot, the first commercial literature work made with sequential art to tell a story in its entirety. It had sequential panels and some gutters, displaying some understanding of momentum in graphic narratives already. There were no dialogue balloons but it contained literary prose at the bottom of the panels narrating the misadventures of a high-society wannabe, just like graphic novels do nowadays. 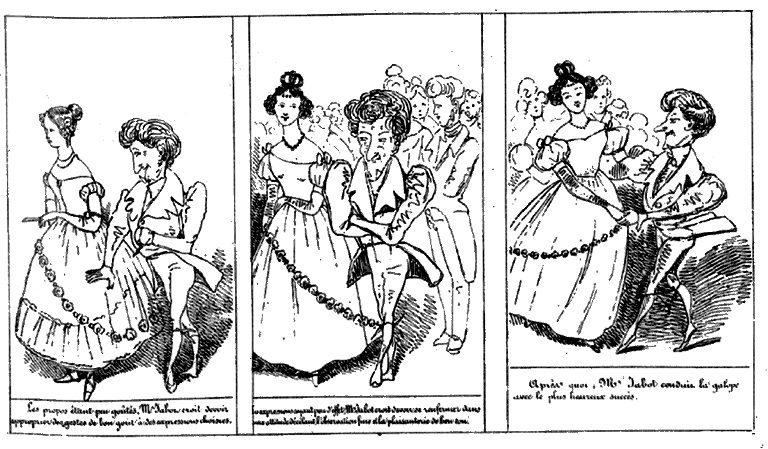 Originally known as Histoire de Mr. Vieux Bois in Switzerland, The Adventures of Mr. Obadiah Oldbuck was originally produced in 1827 but it didn’t receive publication until 1837. it was a very important milestone not only because it technically pre-dated Historie de Mr. Jabot, but it became a smash hit that was translated into English without permission and published in England in 1841. Later, it was published as probably the first newspaper comic printed in the United States through Brother Jonathan Extra supplement No. IX in 1942. Later, in 1949, this graphic novel would be published as the 40-page album known in the European market.

The Adventures of Mr. Obadiah Oldbuck has been said to be a direct influence for the first generations of cartoonists through its reprints. Töpffer was also, probably, the first academic of the medium. He called it littérature en estampes—roughly translated to “graphic literature”—and produced essays studying the art form; Essais d’Autographie and Essais de Physiognomonie. These were translated and republished in 2017 as Inventing Comics by the Sergio C. Figuereido through Parlor Press. R. Töpffer really was Will Esiner before Will Eisner, and Rodolphe probably influenced Will as well amongst other heavyweights such as the celebrated French master artist & engraver Gustave Doré, who made his debut in the world of graphic novels with 1854’s Histoire pittoresque dramatique et caricaturale de la Sainte Russie or The Rare and Extraordinary History of Holy Russia. 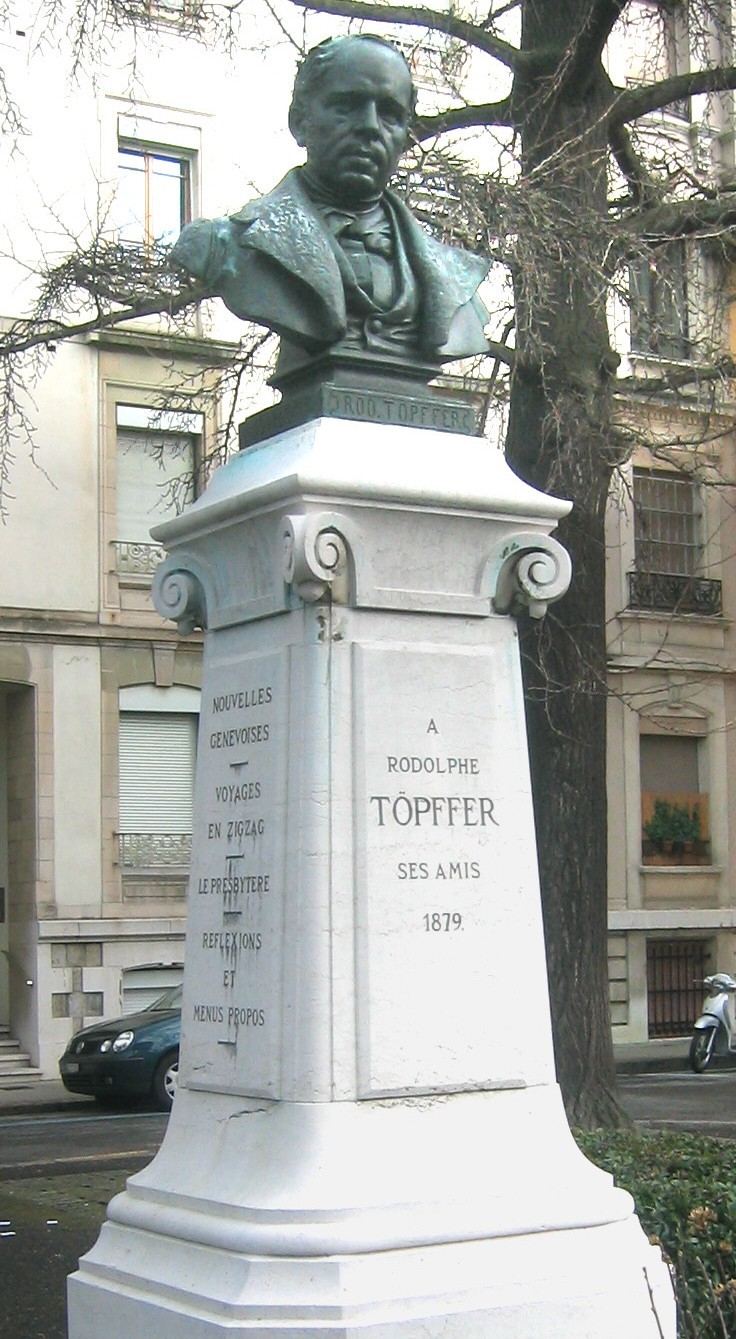 But, obviously, these kinds of publications had gotten a lot of traction by this point in time.  La Caricature (France, 1830), Le Charivari (France, 1832), and Punch (England, 1841, a precursor for Judy) are some examples of what the European society was consuming from newsstands in the Victorian era. But something happened in 1884 when Gilbert Dalziel, Judy’s engraver and publisher, acquaried the rights of the character. He released Ally Sloper’s Half Holiday, a weekly 8-page tabloid-sized magazine featuring a flagship mascot—though not necessarily the main character since the publication had a variety of stories & topics—very similar to what Alan Moore did in some of his later comics when evoking the late 19th. Century editorial style. People tend to think this is the “penny dreadful” style he is employing, but, in reality, penny dreadfuls were the precursors of pulp fictions; these didn’t contain a lot of visual aids, mostly narrative prose. Putting images on paper industrially was pretty complicated and expensive back then, mostly done through engravings, an art form in its own right.

Alley Sloper’s Half Holiday, the direct precursor of the modern comic book pamphlet, was published uninterrupted until 1916 when the paper rationing policies implemented in England because of the Great War hit the funny books, even though the character was used to proselytize English policies (sounds familiar?). It had under its belt 1, 679 issues produced by an army of collaborators. Most notably the letterer James Gibbins, a man who also helped the British justice system to analyze the calligraphy found in the alleged ‘Jack the Ripper’ correspondence. This editorial model also sounds very similar to how mainstream comics operate today. The franchise even made it to the big screen in 1898 with a movie trilogy, just like any other modern comic book franchise does nowadays! However, it wasn’t the first comic book cinematic universe. That honor goes to The Katzenjammer Kids with The Katzenjammer Kids in School, which predated Ally Sloper’s film debut by a few months. It appears comic book movies were all the rage in 1898! 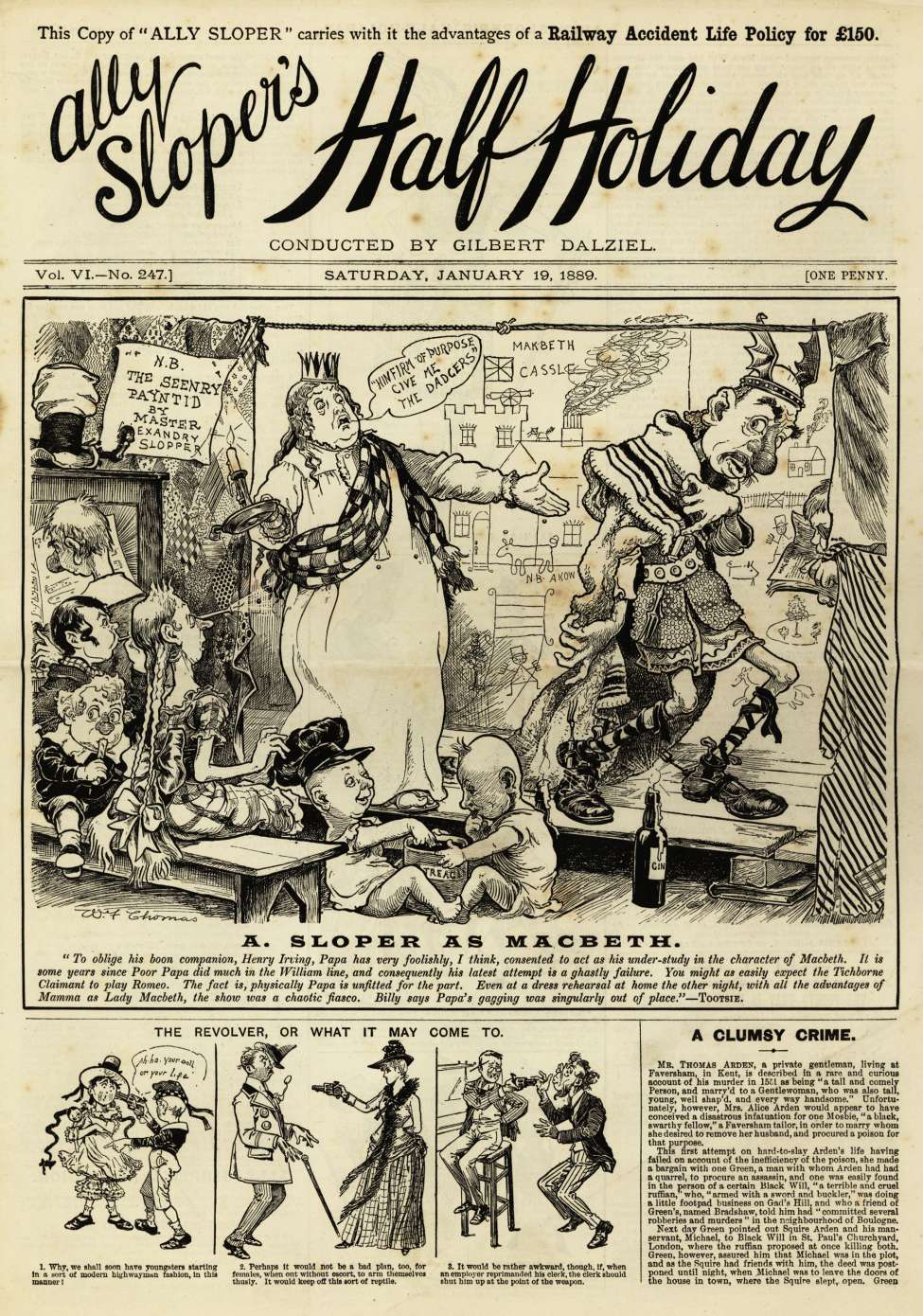 Ally Sloper had many revivals; in the ‘20s, ‘40s, and the ‘70s; but it never reached the level of popularity it had a century ago. The character was too tied-up to Victorian sensibilities.

I’ve been scratching the surface of this topic since 2014 when I wrote an article for the Mexican comic book digest Comikaze #24. Needless to say, it doesn’t stand up to scrutiny today. Ironically, this old history is still an academic work-in-development on a global scale and an exact science it is not, as you can see. It wasn’t that long ago The Yellow Kid was championed as the first modern comic. Little did we know, but I read the entire thing available online and it is still an interesting, beautiful step in the comic book evolution and American history. And I took great pleasure browsing through Little Nemo in Slumberland‘s archives just to see how far ahead of his time Winsor McCay actually was. I really suggest you make it a yearly tradition yourself to see what you can discover. 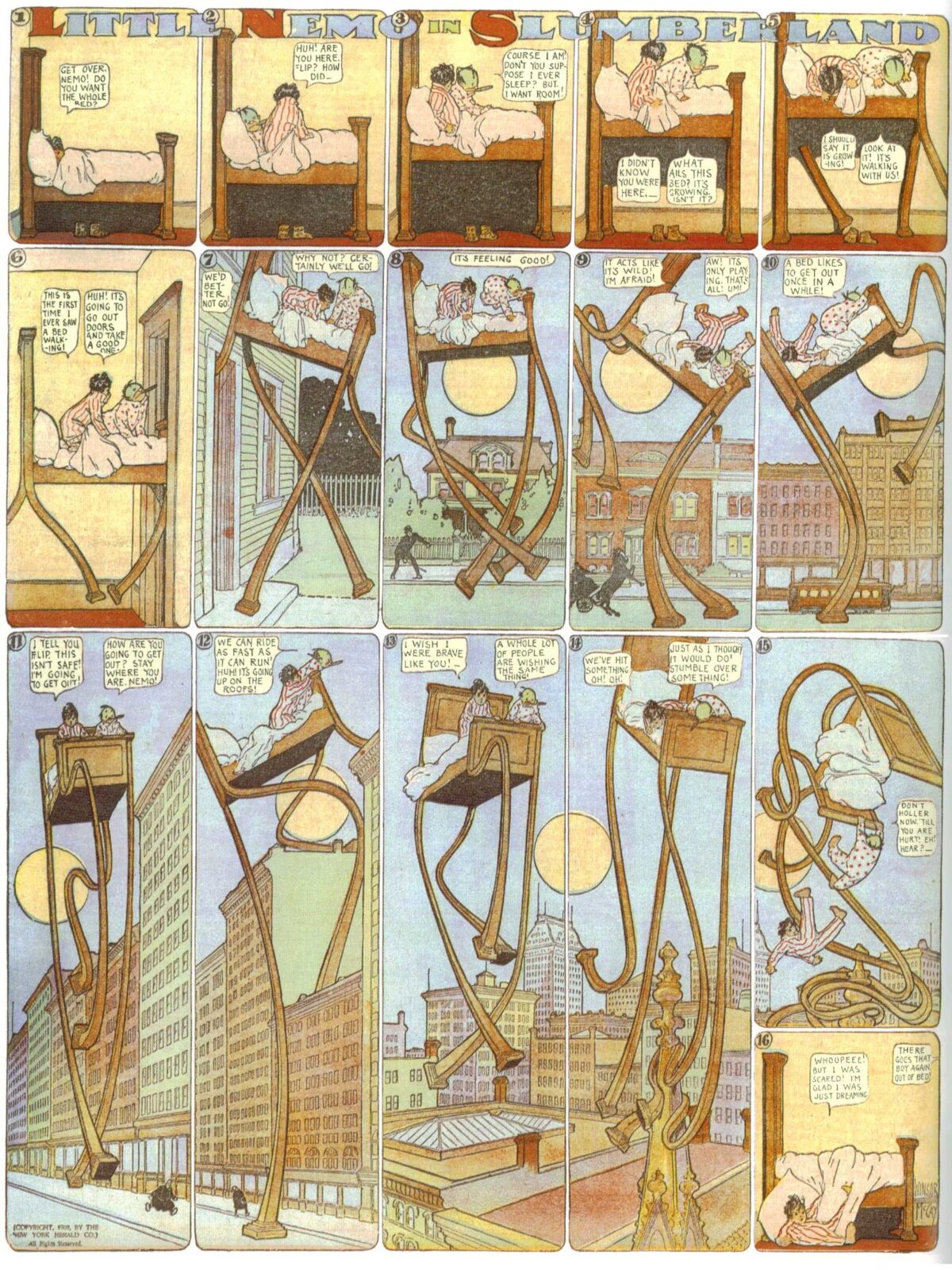