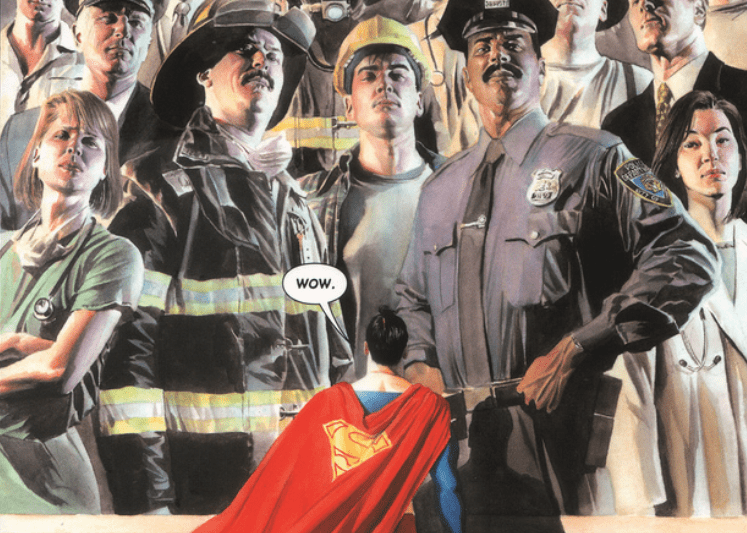 This week, I looked around to see if any artists and writers have written posts for the 20th September 11 Memorial. It wasn’t easy, but here, for starters, is surely one of the most positive examples I could find, from Billy Tucci:

#September11 Never Forget the fallen innocent and our gallant heroes still fighting today from 9/11 related illness. We will forever remember their names and honor their sacrifice. #NeverForget #NeverForget911 pic.twitter.com/BuIRVmbPQc

Drawing I did on my porch on #September11 of my comic book character Ana Ishikawa (aka, Shi). I remember that afternoon waiting, enraged, & feeling helpless to do anything. So many friends & family worked for the #NYPD & #FDNY & we didn’t have any word on anyone. #NeverForget pic.twitter.com/Q2dn37Tq1z

On this day. As a company based in #NYC. We take this time to honor those who fell and the heroes that rose up. #911NeverForget pic.twitter.com/sLGSzv0ePH

To Honor the Heroes of the September 11th Tragedy, a commissioned marker piece of Superman holding up the American Flag. This was a piece drawn in 2019 by the Dude. #911Anniversary #911NeverForget #11Septembre #911Day #911Memorial #Superman #Heroes #SteveRude pic.twitter.com/DsGgAIyBu1

And I gotta say, the image of Superman waving a USA flag is certainly impressive, making this one of the best contributions that could be made for the 9-11 Day of Remembrance.

If there’s something disappointing about the rest, it’s that none of them take a meat-and-potatoes stance, condemning al Qaeda for the tragedy and mass murder they caused, not to mention the aid the jihadists had in Saudi Arabia at the time, and don’t even acknowledge the disaster Joe Biden and company caused via their withdrawal from Afghanistan, which was a shocking example of caving to the same horrors, and destroyed hard work built up 2 decades ago. How can you send a message if you don’t come up with some kind of a statement or illustration that’s damning to the monsters who committed the heinous crime that took place on September 11, 2001? 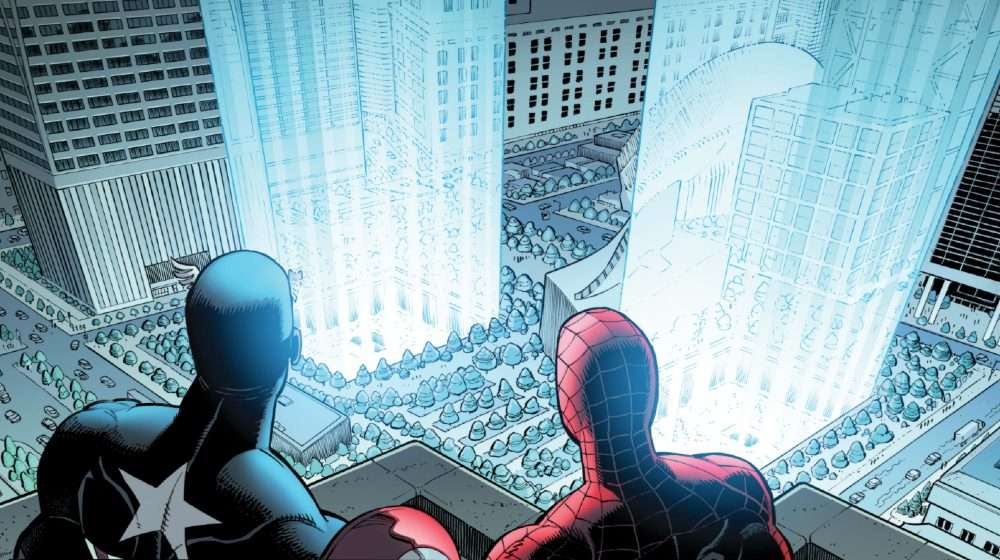 In addition to that, the mainstream comics industry itself almost entirely forbids any criticism of Islam, and practically excuses it, nor do they pay any tribute to movements like 9-11 Families for a Safe & Strong America, and the French victims of the jihadists who murdered staff members at Charlie Hebdo. If they’re not willing to deal with specific issues like these, is it any wonder justice will never truly be served? For now, I’d say Captain America is one of the biggest victims of this PC mentality, and has been for nearly 2 decades already, seeing how Marvel would rather publish stories depicting average Americans as white supremacists. This is the sad state we’ve reached over the years, due to a lot of terrible communist-style indoctrination that’s going on in many liberal establishments everywhere.

And lest I forget, there were quite a few artists and writers who sadly didn’t address the subject at all. That too says quite a bit how far we’ve fallen. 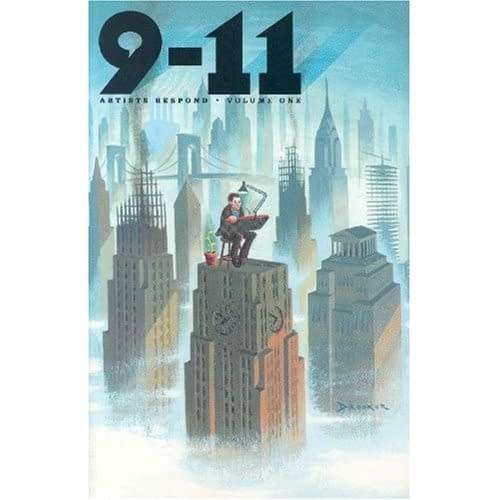 The Valdosta Daily Times did a brief retrospective on veteran comics editor Sid Jacobson’s 9-11 Report graphic novel from 2006, probably one of the very few in the industry proper to ever deal with the subject. It begins with a fishy part:

Two years ago following the investigation into the Trump-Russia connection, someone asked if I would like to borrow a copy of the Mueller Report, I only partially joked, “I’m waiting for the comic book adaptation.”

Which was finally released later that year as “The Mueller Report Illustrated.”

And just how honest or dishonest was that? The whole “connection” was phony, all concocted by the Democrats to create drama for attacking a man who’s now been unfairly ousted from office for the sake of installing a politician who’s not fit for the job into it, which has since led to the horrific disaster in Afghanistan. It wouldn’t surprise me if the illustrated take on the topic was biased against President Trump.

But several years ago, the 9/11 Commission Report was published in book form. People purchased it as they are purchasing the Mueller Report. I read a copy of the 9/11 Report like many other Americans.

I also read “The 9/11 Report: A Graphic Adaptation” by Sid Jacobson, the man who created Richie Rich, and legendary comics artist Ernie Colon.

I think the part about Richie Rich is inaccurate, but what else could you expect from such un-dedicated reporters? I believe Alfred Harvey, Warren Kremer, Larz Bourne and Steve Mufatti were the creators of the character in 1953. Jacobson may have been the writer/editor for a lot of the Richie Rich stories, but he was anything but the creator per se. 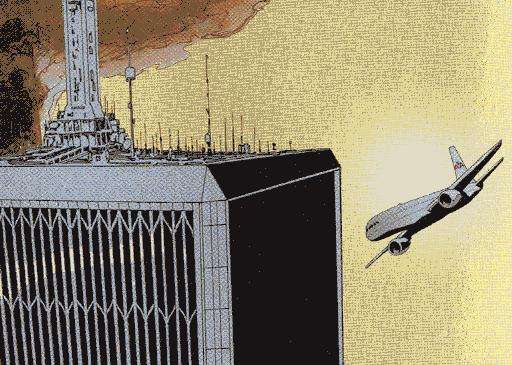 Yes, there was a comic book adaptation of the 9/11 Report. There was nothing disrespectful about it. Jacobson and Colon took a serious look at a serious subject.

From the history of Al-Qaeda’s rise to the history of terrorism in America to the training of terrorists in flying but not landing planes to the awful events of Sept. 11, 2001, the details of the 9/11 Report lent themselves to adaptation in comics form.

Though when reading the original report in text book form, the thought would have never crossed my mind to adapt it into a graphic novel.

What’s really sad is that, if you take a look at the atmosphere since, much fewer in the industry proper want to touch upon the subject. That aside, I’d written about this subject 15 years ago, and found the graphic novel has a lot of ups and downs, so it’s a very mixed bag for anybody hoping to see a tour de force look at a serious topic. As a result, can it be considered the most serious look at the issue?

Jacobson and Colon created a tremendously readable version of the 9/11 Report as a comic book. There were graphic interpretations for data and loads of information boiled down to a hundred-some pages of masterful comic book storytelling.

“The 9/11 Report: A Graphic Adaptation” even received a promotional blurb from comic book legend Stan Lee: “It will surely set the standard for all future works of contemporary history, graphic or otherwise, and should be required reading in every home, school and library.”

It was and remains a milestone in graphic storytelling both in terms of displaying what the comic book form is capable of achieving and better understanding the history of an era.

Still worth finding a copy these many years later. Or pulling from the shelf and reconsidering again.

I had looked over the material provided years before, and a lot of the sample pages originally provided by Slate are still online. But as I said before, there are many strengths and weaknesses to the graphic novel, so I wouldn’t go so far myself to say it’s the numero uno best book on the subject. However, I do wonder how well it’s going to hold up now in view of what George W. Bush did wrong in his time, and now that he’s made divisive statements on the 20th anniversary of 9-11, that were throughly inappropriate, and soiled what should’ve been a moment of unity. It’s enough to make one wonder if there should be another graphic novel produced about what’s gone wrong with the war against terrorism in the years since, including in France and Britain, but again, if past history is any indication, there’s only so many comic writers and artists today who refuse to associate themselves with the subject, and that’s why a serious issue like this is unlikely to be explored further, if at all.

Political correctness has injured creativity and seriousness only so much. Who knows if even Jacobson and Colón are still willing to tackle all these issues?

More The Next Battle For Freedom