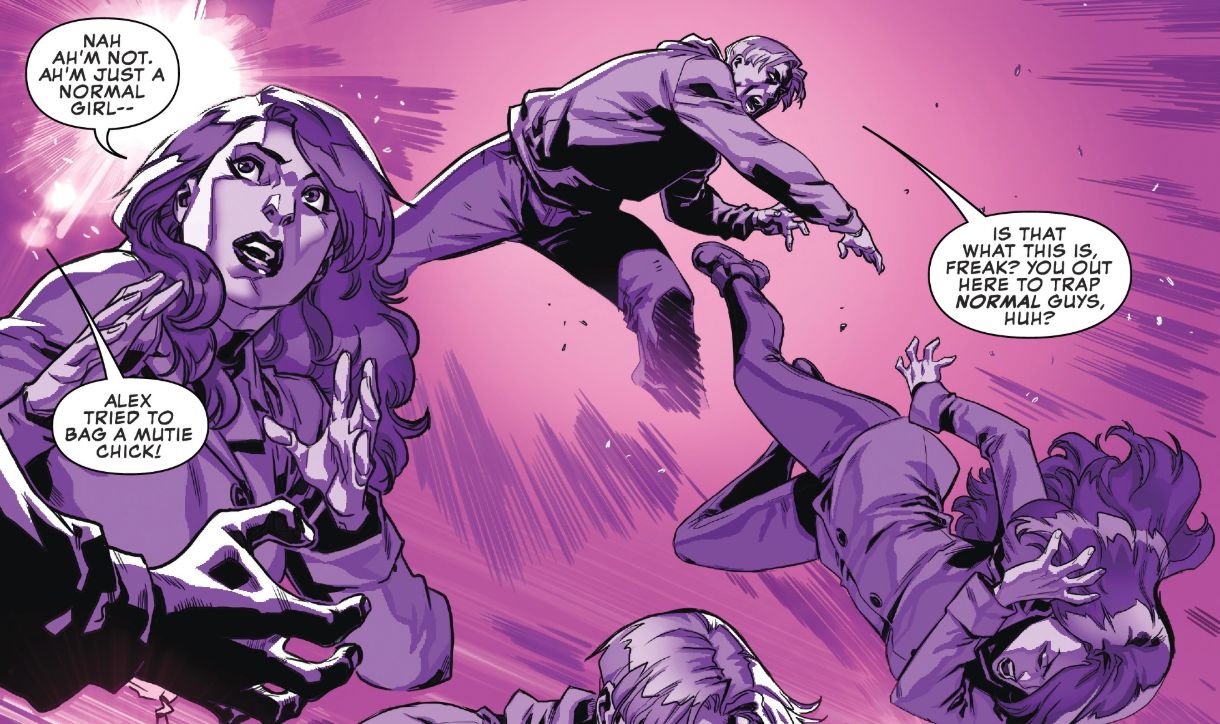 I have already  written a piece covering the X-Men story where Wolfsbane was murdered without fighting back, if at all. The writer, Matthew Rosenberg has since apologized for it, but not because he terminated Rahne Sinclair. Rather, because LGBT supporters believe his story is transphobic:

Marvel writer Matthew Rosenberg has apologized for some content that’s been deemed insensitive and inciting transgender-panic in the latest issue of Uncanny X-Men.

Uncanny X-Men #17 revealed how Rahne Sinclair, the mutant Wolfsbane, died in a flashback that depicted her being accosted by a group of men in a park. After she rebuffed one of the men’s advances, the group began aggressively harassing her. After she revealed her mutant powers by briefly shifting into her werewolf-esque form, her attacker insisted that she was trying “to trap normal guys” as they began beating her to death.

In the wake of the issue’s release, commentators at Women Write About Comics, The Beat and elsewhere said that the scene was an insensitive depiction of transmisogony that trivialized the kinds of violence that trans individuals experience in the real world.

Umm, is there any documented proof transgenders suffer violence, or that nobody can figure them out? Point: tall men who pretend to be women don’t shrink, and men’s arms are usually larger and have broader shoulders than women’s, so it’s not like they can’t be told apart. But all that aside, the reaction to this story from such leftists is most fascinating: if this story had been written over a quarter century ago, at the time Scott Lobdell wrote his heavy-handed Alpha Flight tale where Northstar’s homosexuality came to the fore in a clash with Major Maple Leaf, chances are it would’ve received huge praise for citing an allegedly severe problem with how homosexuality is received by wider society. Today, however, it appears we have a case of SJWs who don’t want what they consider serious issues brought up, even in metaphorical terms. My, how the times have changed.

If anything, the scene, at the least, appears to allude to the AIDS epidemic of the past 30 years (and the Legacy Virus was Marvel’s allegory for it), with the creep who struck Rahne indirectly accusing her of trying to poison them. So it’s another classic overreaction at work. Yet this is what Rosenberg’s now apologizing for:

Also, if you’ve been reading our book and enjoying it, or disliking it I guess, I’d urge you to consider making a donation to @TransLifeline and help support the vital work they do.https://t.co/9PYNTF2HMF

So this is what he sees fit to say he’s sorry for, not for terminating Rahne in the poorest of ways. And it looks like he’s got plans in store to wipe out at least 2 more X-Men, with the excuse being that they’ll be men this time, as if that makes the cliche any more justified. The point is, these X-Men killings have become to commonplace for the sake of short-term sales spikes, and have to be ground to a halt. As do these boring outrages by social justice screwballs.