In May 2016, Geoff Johns and DC Comics launched DC Rebirth. Wally West’s return was a symbol of hope and new beginning following the failed New 52 initiative championed by Publisher Dan DiDio. The New 52 led a wide-spread reader exodus from DC Comics. The New 52 was a dark, hopeless version that barely resembled the DC Universe. 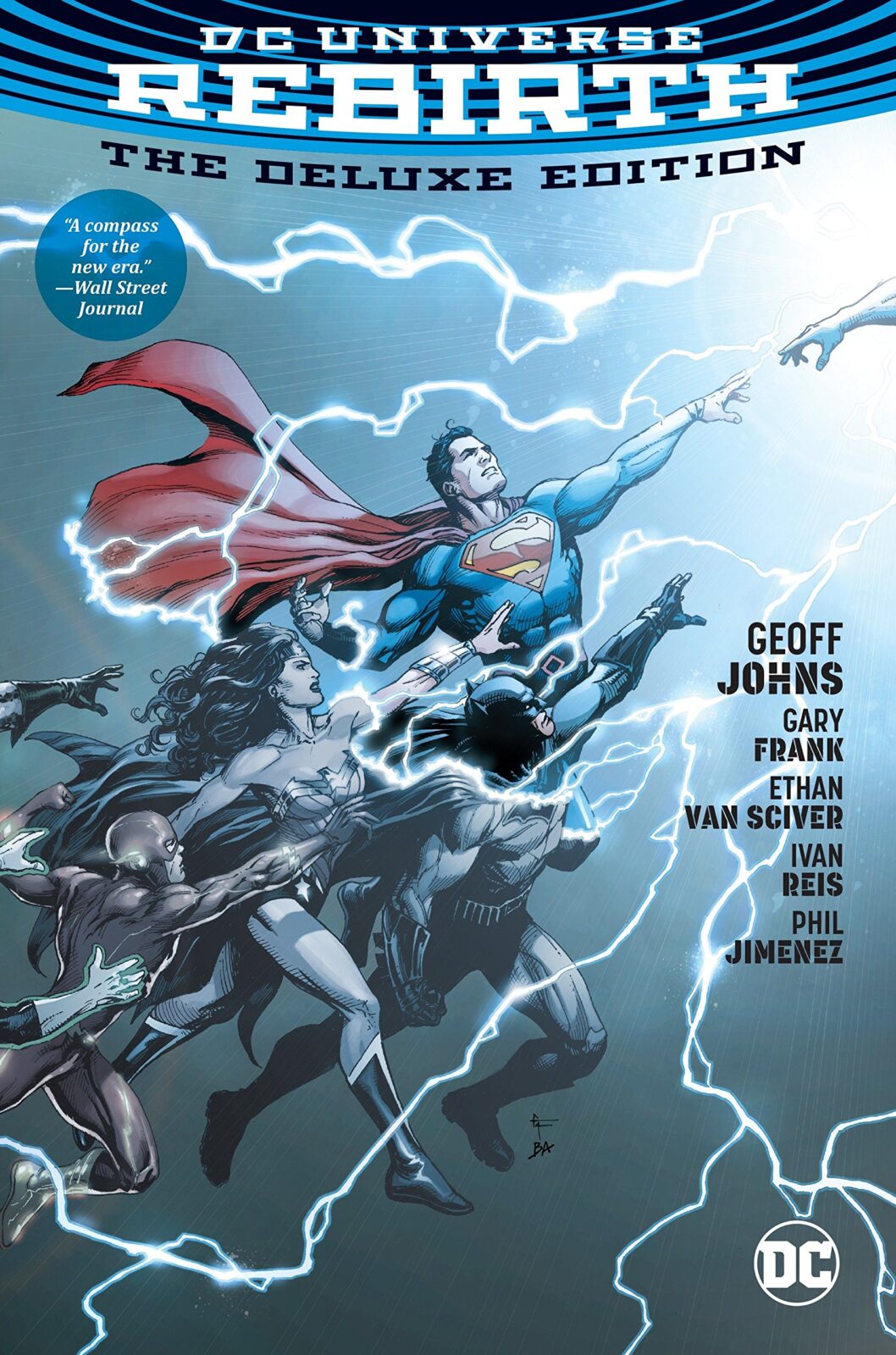 Geoff Johns and DC Comics Rebirth rejected the dissolution of the New 52. The relaunch was an enormous success. Customers returned to DC’s optimistic universe led by virtuous heroes. Diehard Marvel Comics fans, in the midst of their own self-inflicted crisis, jumped aboard. DC Rebirth featured brilliant series and characters led by the best creators in the industry. DC Comics identified their issue, addressed it and brought readers back.

How did DC Comics lose sight of their own customer base? This is at the direction of the three key creative directors at DC Comics. Co-Publishers Dan DiDio and Jim Lee and EIC Bob Harras. Dan DiDio also holds the title of President and believes heroes can’t have happy lives. Jim Lee, who assumed the CCO title vacated by Johns, is a beloved industry figure who seems above reproach from many readers. Bob Harras is a longtime industry executive who has a distaste for Mark Waid.

At San Diego Comic-Con 2019, Dan DiDio proved his ignorance of DC’s reader base. He said, “We do these Facsimile Editions where we reprint older issues of comics including all the old ads and stuff…and in some cases these are selling more than the new comics with these characters. People are more interested in buying the stories from 30 or 40 years ago than the contemporary stories, and that’s a failure on us.”

DiDio continued, “We should be focused on moving things forward, always pushing the boundaries and finding new stories to tell. That’s how we’ll survive and grow this industry.”

Pushing boundaries away from DC Comics core competencies, character history and hope-filled universe is their biggest failure. DC leadership are oblivious why reprints of 40 year old comics sell better than new books with the same characters. It’s all about quality and the message of their stories. Few modern comics tell the heroes journey or other tried-and-true storytelling methods.

DC has once again dropped their hopeful universe of virtuous heroes in favor of a dark, hopeless universe featuring character deconstruction. Expecting to catch lighting in a bottle with the next Watchmen or Dark Knight Returns.

A major issue at rival Marvel Comics is creators using established characters as mouthpieces for personal ideology and grievances. A practice becoming more common place at DC Comics. Mark Russell used Harley Quinn to denigrate customers. YA author Cecil Castellucci utilized Jack Kirby’s New Gods for her take on the #metoo movement. Greg Rukka is using Lois Lane to express his personal distaste towards President Trump. Does anyone believe this is what “The King” Jack Kirby, Bruce Timm or Paul Dini had in mind when creating their characters?

Brian Michael Bendis’ time at DC Comics is a complete disaster. His terrible sales on Superman and Action Comics are the least of DC Comics issues. He’s a major force behind internal DC Comics politics. Since his arrival his sphere of influence has grown exponentially. He brought David Walker and an assortment of artists with him. Kelly Sue DeConnick, G. Willow Wilson and Matt Fraction arrived soon after. He added the previously mentioned Mark Russell to his stable of DC followers.

Bendis sold Dan DiDio on the idea he could bring Marvel Comics success with him. He’s actually importing the internal culture rot plaguing “The House of Ideas”. Bendis himself is rather benign but most of his followers are fiercely anti-consumer and pro-political indoctrination. I’ve heard accounts of Fraction and DeConnick contacting industry critics directly for expressing dissenting opinions about their works. Russell is one of the most anti-Christian creators in the industry.

DC leadership anointed Brian Michael Bendis and Tom King the most important creators at the comic book publisher. Creators with a better feel for the DC Universe and readership like Peter J. Tomasi, Dan Jurgens and Robert Venditti sit underused. Stuck on mostly low profile titles. While Bendis and King destroy character legacies in order to curry favor with Co-Publisher’s Dan DiDio and Jim Lee. They are the primary weapons of mass character destruction and chief architects of DC Comics dark, hopeless Universe.

During his brief time on Superman and Action Comics Brian Bendis destroyed Clark and Lois’ idyllic relationship. Hinting Lois cheats on her husband. Depicting Superman as an incompetent father who allows his pre-teen son Jon to travel space alone with his psychotic grandfather. Jonathan Kent was lost on an alternate Earth, tortured by evil versions of his parents for seven years. Readers are supposed to forget the implications of Bendis’ disgusting writing. Perpetrated so DC Comics can shatter Superman’s image as a competent, loving father and husband. 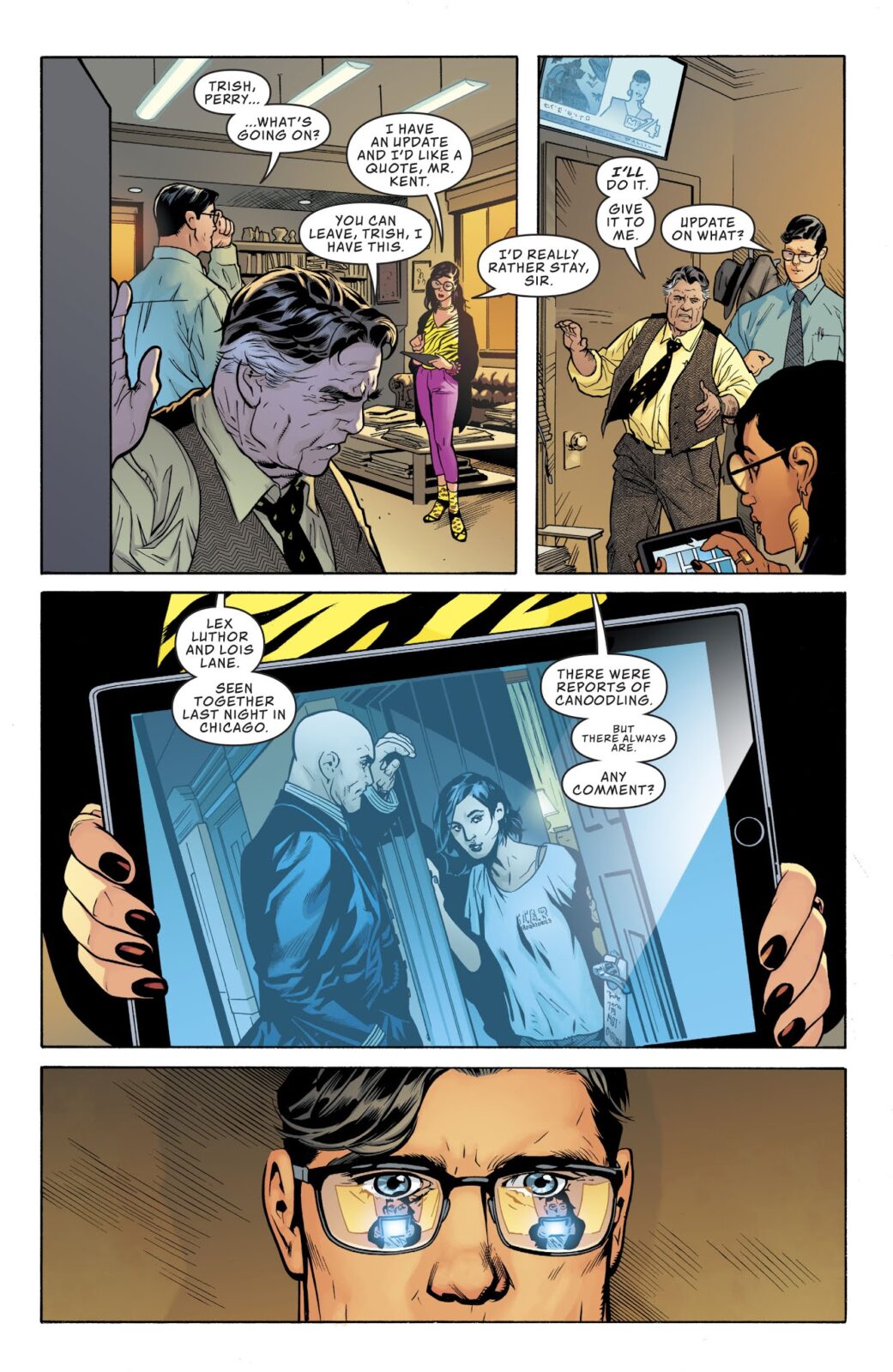 Tom King’s actions are even more destructive. Prior to Batman’s emotional breakdown following Batman #50 King exposed “The Gotham Knight” as an inept fool. Batman allowed Joker to murder multiple families and shoot him in the head. In Batman #55 Dick Grayson was shot in the head by KGBeast. Resulting in amnesia, dropping his Nightwing persona and worst of all going by Ric Grayson. The Nightwing series, at the time one of DC’s consistent sellers, is virtually dead now.

Tom King presented DC Comics with a story about trauma and PTSD called Heroes in Crisis. DC leadership handed King Wally West’s legacy on a silver platter. By the time the Heroes in Crisis completed dozens of heroes were dead including previously redeemed Roy Harper Arsenal. Wally West, the symbol of hope in DC Rebirth, is now a mass murderer who frames innocent people for his crimes, plots to take his own life and is currently in prison for his murders. The story never adequately addressed issues of trauma or PTSD. There was no hero’s journey or redemption for anyone. Only pointless death and a continued path that nearly ruined the company during the New 52.

Dan DiDio has long maintained superheroes can’t experience happy lives. Not surprisingly Superman’s marriage was at the top of his now infamous “hit list”. Transforming Bruce Wayne into an emotionally fractured weakling supports his repugnant views on superheroes. DiDio’s also on record explaining his hatred for “legacy” characters like Dick Grayson, Roy Harper or Wally West. All victims of DC Comics weapons of mass character destruction. Tom King and Brian Michael Bendis aren’t the only writers removing names from DiDio’s “hit list” and spearheading DC’s return to the dark side.

Scott Snyder led 2017’s smash-hit Dark Nights: Metal event. The end of DC Comics Rebirth era and reentry to New 52’s dark themes and hopeless ambiance. Most notable is the emergence of extremely popular Batman Who Laughs. A mash-up of Joker and Batman from the dark multiverse. The character resonated with DC readers. Snyder and DC launched a Batman Who Laughs miniseries leading to the “Year of the Villain” event. The boundary shattering evolution of New 52’s “Month of the Villain”.

Scott Snyder leads a group of creators including Greg Capullo, James Tynion IV and Joshua Williamson that make up a third competing faction at DC Comics. Snyder is a far superior writer than King or Bendis but is said to have far less interest in political gamesmanship. That hasn’t stopped his crew from collecting scalps from Dan DiDio’s “hit list”. Tynion IV killed off Martian Manhunter in Scott Snyder’s Justice League #28.

“Year of the Villain” features six evil DC heroes infected by Batman Who Laughs’ pathogen. Previews of the Joshua Williamson led Batman/Superman series that spins out of the Batman Who Laughs miniseries reveal Billy Batson Shazam is one of the infected. DC Comics most inspiring hero is front and center on Dan DiDio’s “hit list”. 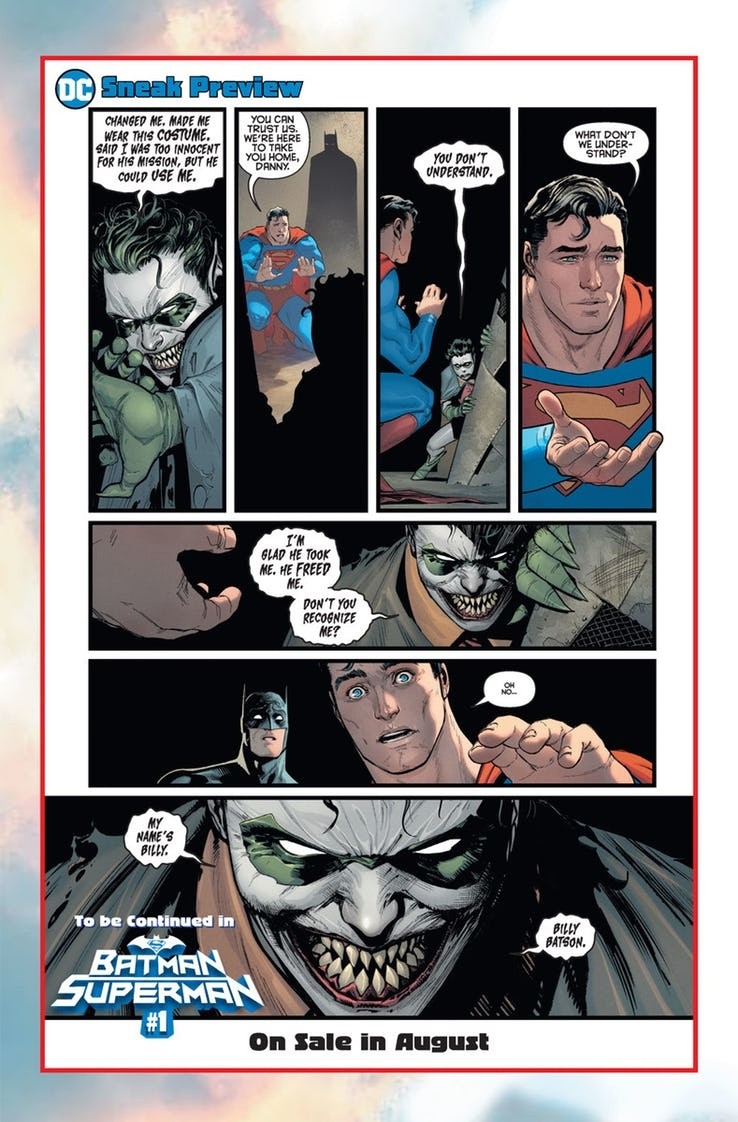 DC Comics hired Comics Alliance EIC Andy Khouri as editor in 2015. Comics Alliance is patient zero in the ongoing culture epidemic in the comic book industry. They’re push to promote fringe ideology and identity politics in comics are a major reason Marvel Comics is a dysfunctional mess to this day. Dan DiDio and Jim Lee gave him the keys to the iconic Vertigo imprint to celebrate its 25th anniversary.

Within seven months of announcing the Khouri led Vertigo relaunch DC Comics suffered three major scandals and two series cancellations. Almost all Vertigo series were cancelled prematurely. Two never even published a single issue. 12 turbulent months after DiDio and Lee handed Andy Khouri the keys to Vertigo. His team of ideological extremists killed iconic Vertigo for good. Khouri should have been fired for incompetence, but it appears he’s been shuffled to DC’s newest imprint.

“Many of our perennially best-selling, critically acclaimed books were produced when we unleashed our top talent on standalone, often out-of-continuity projects featuring our most iconic characters, a prime example being Frank Miller’s The Dark Knight Returns,” explained publisher Jim Lee. “Creating DC Black Label doubles down on our commitment to working with all-star talent and trusting them to tell epic, moving stories that only they can tell with the highest levels of creative freedom.”

DC Comics quickly changed their tune after Vertigo folded. They restructured their lines along age demographics. DC Black Label is now focused on content aimed at readers 17 and up. Black Label was one of the hottest properties in all of comics at the time of Vertigo’s closing. Andy Khouri’s name is resurfacing, attached to many new Black Label projects.

It’s a watered down version of what customers were sold. Instead of the very best writers in the industry the imprint now features Kami Garcia. Co-author of YA novel Beautiful Creatures with Marvel Comics failure Margaret Stohl. Stephen King’s son and creator of IDW’s Lock and Key Joe Hill has an entire line of horror comics under DC Black Label. It’s infested with “edgy” Joker and Harley Quinn projects in preparation for the upcoming Joker and Birds of Prey films.  Black Label appeared to be the next evolution from DC Comics. DC Black Label became “can miss” comics within months after launch.

DC Comics leadership didn’t learned from past mistakes. As soon as Geoff Johns exited his CCO position the publisher reverted right back to the dark themes and hopeless ambiance of the New 52. DC Comics don’t respect the creator or character histories that makes the company an American institution. They’re importing the culture rot that’s been eating away at Marvel Comics for years now. The list of victims on Dan DiDio’s “hit list” is growing rapidly. Andy Khouri collapsed Vertigo under the weight of fringe ideology and identity politics. DC leadership rewarded him with a position at DC Black Label.

The question is who is to blame for all of this. Brian Michael Bendis and Tom King play large parts in the beleaguered state of DC Comics. Creators can only do what leadership and editorial allow. DC Comics recent failures fall equally on the shoulders of Co-Publisher’s Dan DiDio and Jim Lee and EIC Bob Harras. Dan DiDio may be the chief architect of the dreadful decision to move back to the New 52 but Lee and Harras are complicit. It’s time for Time Warner management to clean house and find some new blood with an understanding of what makes DC Comics great. And ultimately what DC readers want from their comic books.

For a more in-depth look at DC Comics current woes please watch the video below.

Who is to Blame for DC Comics Current Woes?