Creator Jon Malin Thrilled to Be Working the ‘Graveyard Shift’

Jon Malin is a self-taught artist who started his comics career in the independent market starting out on Digital Webbing Presents #1 followed by some cover work and various pin-ups in Image Comics. His first high profile break came when he was picked up by Rob Liefeld and asked to launch the Nitrogen and Supreme Sacrifice series, written by Robert Kirkman for Liefled’s Arcade Comics imprint. He then went on to illustrate a Youngblood revival for Liefeld in 2012. He was eventually acquired by Marvel Comics to illustrate Cable Deadpool before going on to illustrate New Warriors, Thunderbolts, and soon Cable.

Jon eventually parted ways with Marvel and returned to independent comics working on Jawbreakers from Richard Meyer on Splatto Comics, and also doing some cover work. Now that he’s caught up on his contract and freelance assignments, Jon is finishing up his most ambitious project yet, his very own property ‘Graveyard Shift‘ which is launching a crowdfunding campaign on Indiegogo.

I spoke to Jon over the weekend about this project and since today is the day the crowdfunding period kicks-off, decided to publish our interview today.

BF: How long have you been illustrating comics, Jon?

JM: I started in the early 2000’s in an independent comic called Digital Webbing Presents #1, it was my first step into getting serious about comics. This is where I met Ryan Ottley who came on in issue 2 or 3 and was clearly destined for big things. 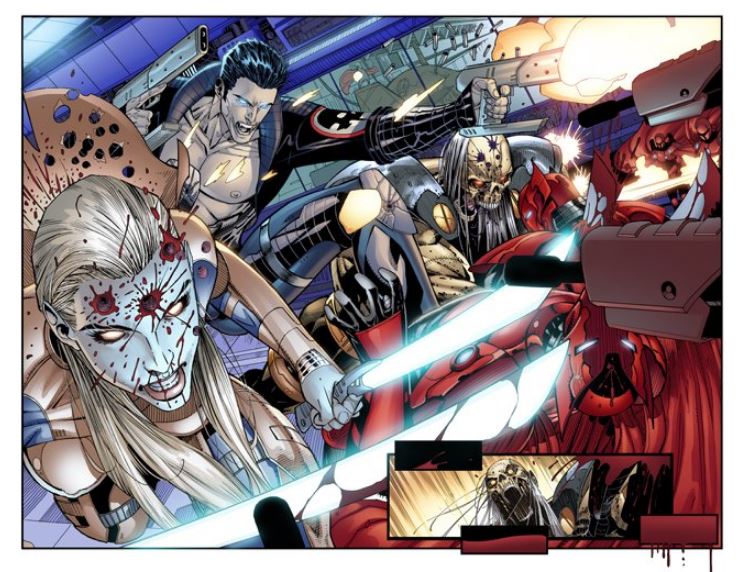 BF: You’ve got an Indiegogo campaign for your own comic, Graveyard Shift, which is a creation that was integral to how you got your first gig at Marvel. Tell us the pitch:

JM: It’s the Universal Monsters if they we’re the X-Men. It’s basically superhero action spun around horror and sci-fi genres. It’s meant to be exciting and fast, not a slow burn. We use the classic superhero/sci-fi trope of science gone awry as different scientists are murdered and forced into their own regeneration experiments. Finding they’ve been given supernatural strength, speed and healing abilities, they must wage a war to save the Earth from those who betrayed them and also seek to enslave humanity. 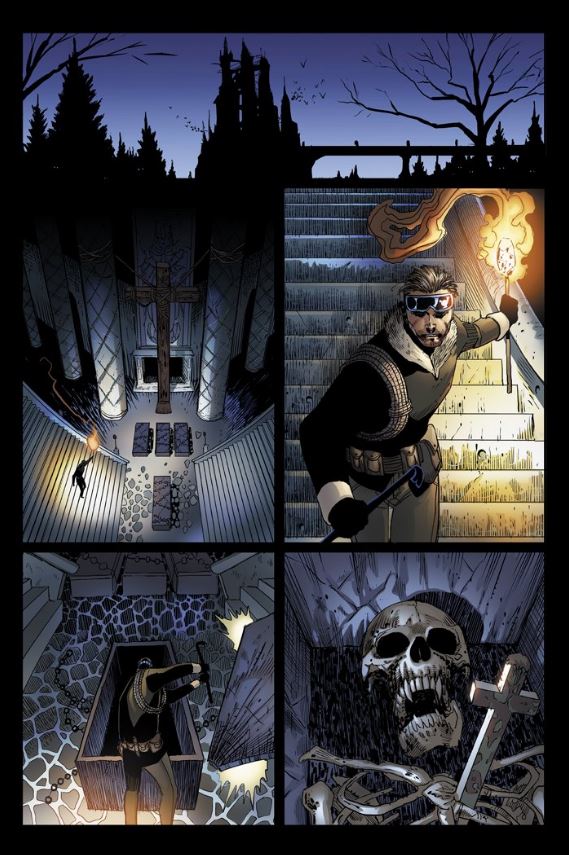 BF: Awesome! How long have you been working on this project?

JM: Mark Poulton and I started way back in 2010! Every time I got rolling on it I would get hired, once for Youngblood, and then by Marvel. Of course, paid work always comes first, but I kept coming back. We had 46-pages fully drawn and colored (by ZEE!), before I was hired at Marvel. 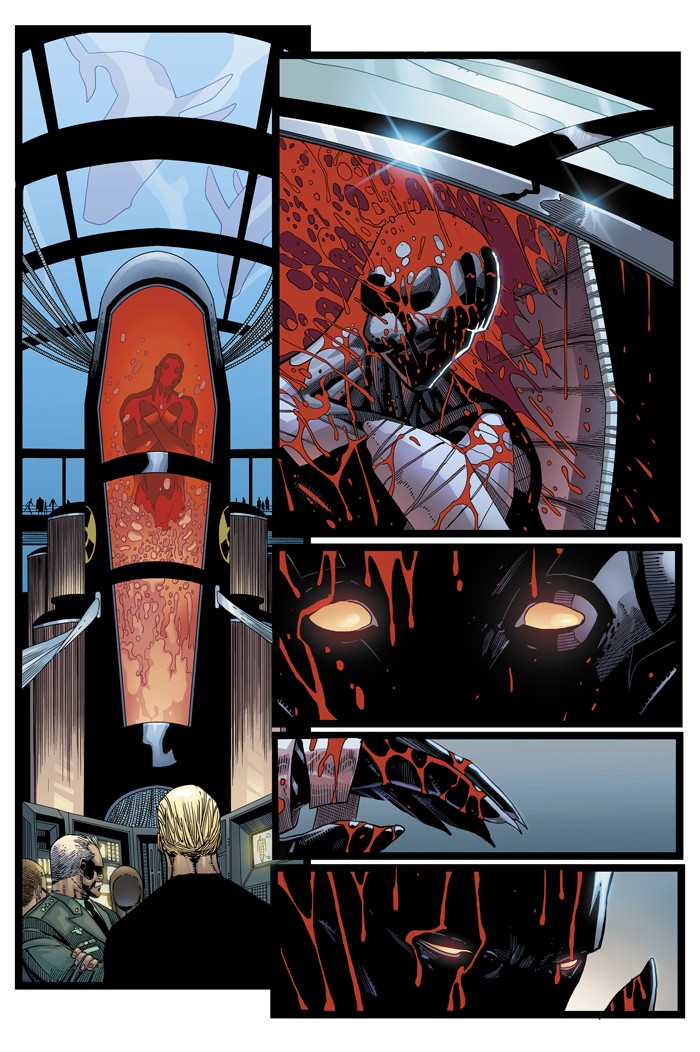 BF: You’ve become involved in some other independent comics that are successfully crowdfunding, most notably handling art chores on Jawbreakers with Brett R. Smith on colors. What’s the current status of that project and when can backers expect to have a copy in their hands?

JM: I wrapped Jawbreakers around August 3rd. I even backed it at the $50 tier myself! I expect they’ll ship in September, but it depends on where Richard has them printed. When I finished the art, I immediately turned my attention to GRAVEYARD SHIFT. I’m just like everyone else who supported the project – happily waiting for JAWBREAKERS to be delivered at my home.

BF: Would you say the success of Jawbreakers is what made you decide to go forward with Graveyard Shift, or was this already on your schedule?

JM: I had already gone back to working on GRAVEYARD SHIFT when Richard reached out to me for JAWBREAKERS. It’s my passion project! The success of JAWBREAKERS, CYBERFROG and RED ROOSTER showed there is a strong community ready for new stories and characters. Right now we are ending what I consider the 1st major wave of Comicsgate projects as everyone moves to fulfillment. So I think the timing is right for us to see what this project can do. 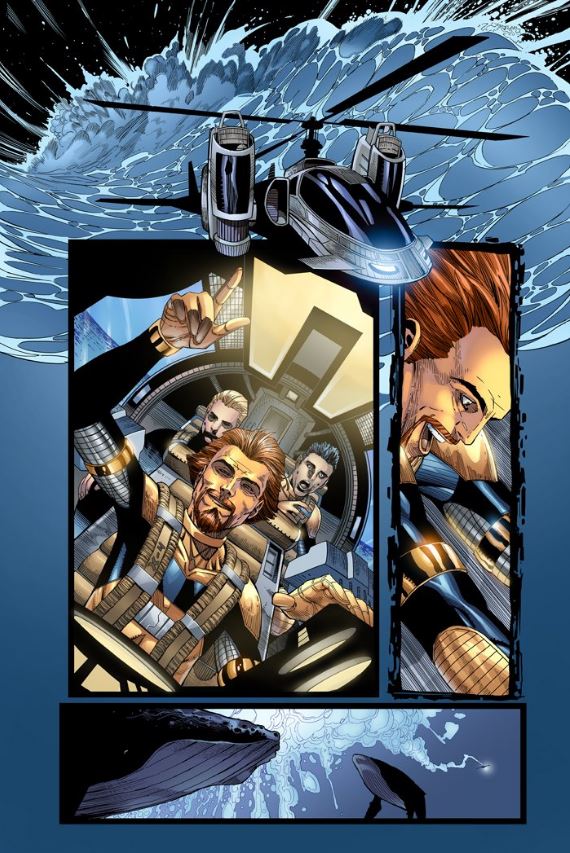 BF: Back to the story. What else sets Graveyard Shift apart?

JM: GRAVEYARD SHIFT is a superhero team of the undead! It’s meant as a high action piece with somewhat familiar characters. We have stand ins for Dracula, Frankenstein’s monster, the “Bride” of Frankenstein, haunted castles, the Creature from the Black Lagoon, all reinterpreted as superheroes! Along the way, we have many more homages to superhero, horror, sci-fi genres. I don’t think any other comic book looks like this, or feels like this. 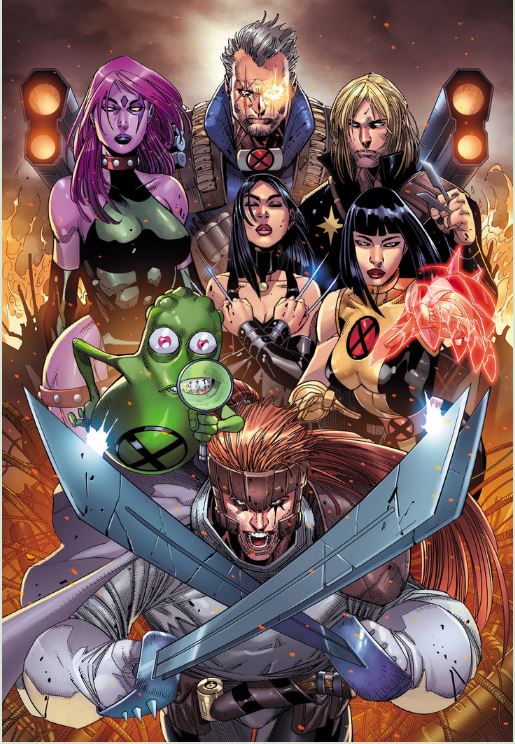 BF: You left Marvel several months ago after your fan favorite run on their Cable title citing a discomfort dealing with the politics of some of their editorial staff. Do you feel any differently about that decision and do you think anything has changed at Marvel since then?

JM: I don’t feel any differently at all. It seems like Marvel Comics has become too afraid about causing any microaggression online or doing anything that would allow a creator to express themselves through their art and stand above the crowd when it doesn’t fall in line with their social justice politics. For instance, Marvel editor Tom Brevoort doesn’t think white people can wear dread locks! Both he and Sana Amanat seem to have a bone to pick with white people and Republicans. She actually wants to expand a failing Marvel into becoming a “Lifestyle Brand,” doing internet cooking shows. I guess she’s concerned about MARVEL being a “boy brand.” Not a great call for a “superhero company” that should be targeting HARD for every fourteen to ninety-nine year old male on the planet. And if that targeting happens to bring female readers along because the stories are engaging them as well, then GREAT! Or just let Barbie do the same for girls. Let them create Barbie fanatics! Let a female superhero driven comic company rise-up and build that market instead of trying to infiltrate and dilute Marvel’s well-established  “boy brand”. 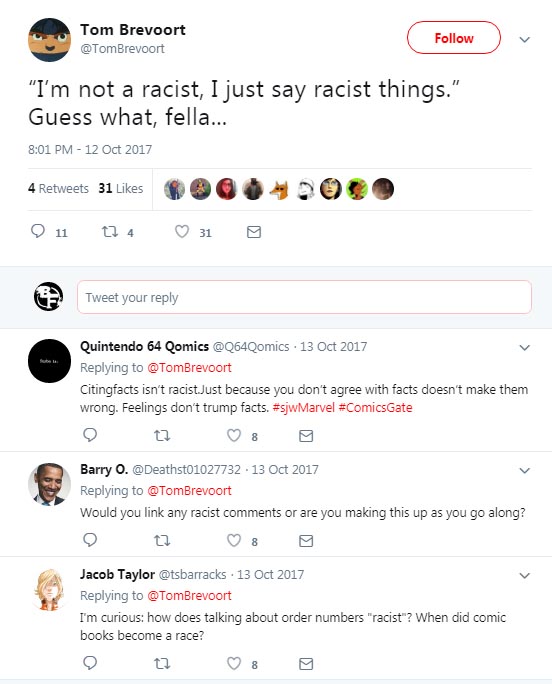 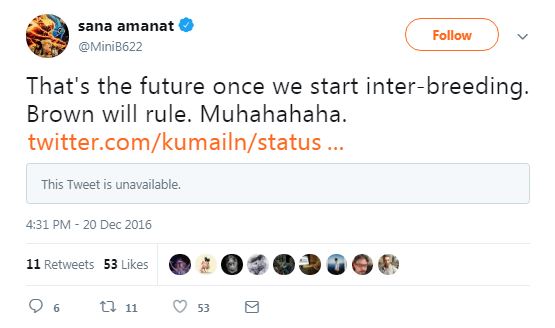 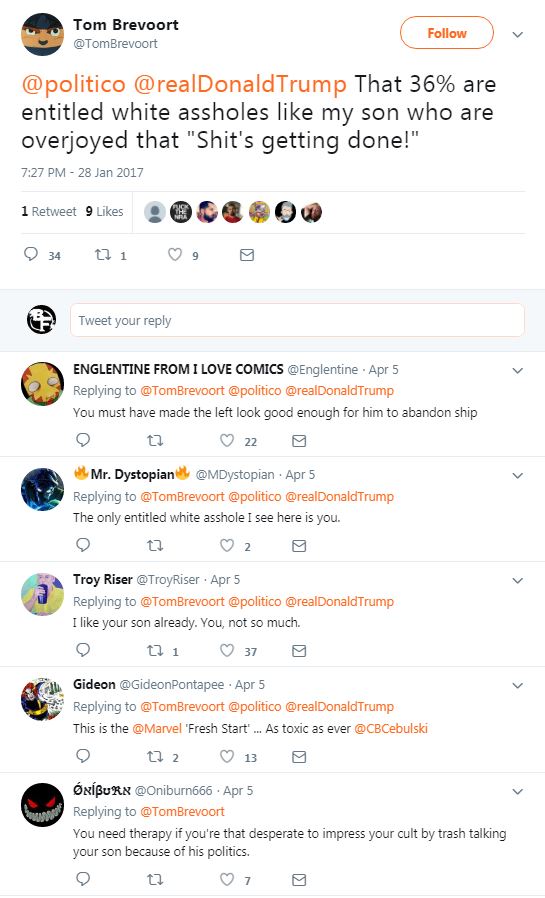 Don’t get me wrong. I encourage women to work at these companies. Many great female creators have worked at Marvel and kicked all types of butt. But those women knew the brand, knew their audience, and above all had actual talent—

(sarcasm alert) I mean, they may not be up to the level of a VERTIGO SUPERSTAR comics writer every bit deserving to be in this industry because she worked her whole life to write comic books like DC’s Zoe Quinn…..but they’re up there!

But seriously, editorial and Cebulski’s allowing identity politics and bad business practices has chopped out fans, both male and female dollars, by the truck-load. This is leaving local comic shops with no other choice but to close their doors because of a radical push for some softer, gentler, gender-neutral driven audience that has never quite emerged. It’s beyond sad. It’s laughable. No one takes Marvel seriously at this point, not even Marvel themselves…

But Marvel’s ever evolving PR disaster is our gain. The Comicsgate creators are not afraid to tell stories that are geared to entertain that 14 – 99 year old male audience. And of course, I certainly hope women are attracted to the work every bit as much as the boys, but I’m going to play to my “gender strengths” of remembering what that 14-year old Jon Malin was into. While the big publishers cut apart their audience, we will do our best to offer something for EVERYONE to still be entertained by.

BF: Geek culture from comics to movies to television to gaming seems to be infested with social justice warriors (SJWs), toxic fandom, gatekeeping, and many other industry-killing ailments these days. Do you see any solution to healing the division that this has caused?

JM: They’re in a cult like behavior. So many anti-capitalists running these companies. If you ever want to fix the problem, you have to first admit that there is one. Drastic change MUST happen from top to bottom. And I mean drastic. 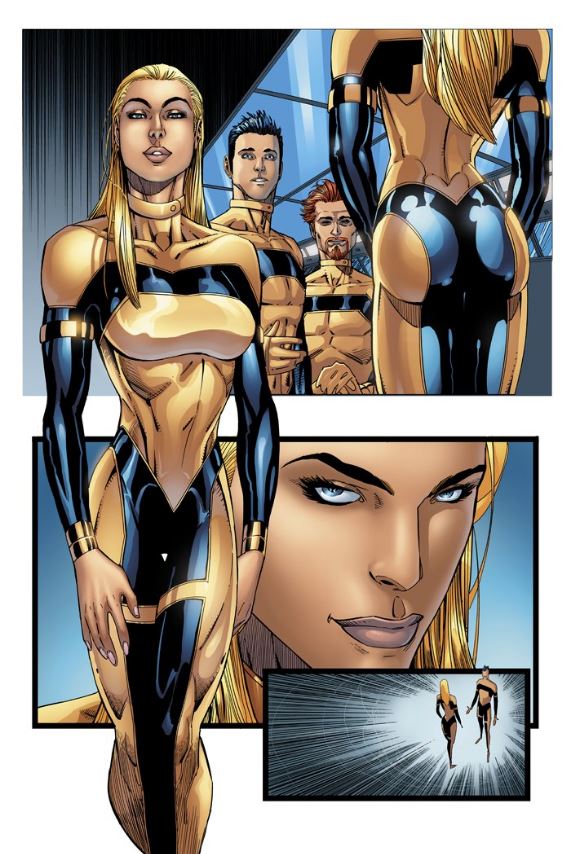 BF: Are you looking beyond Graveyard Shift towards your next project?

JM: Yes! I’m working on setting up my next art project right now, and if all goes well I’ll have more to say to Bleeding Fool at some point in the near future! I’m trying to reach out and expose as many people as I can to comic books and hopefully make them more aware of the modern comics market that is often called “Comicsgate“.

BF: Presuming your campaign hits its goals, (and we bet it will the first hour), when do you think your backers can expect to start seeing their books?

JM: I’m putting the estimated date for February 2019 just in case something crazy happens, but I am aiming to deliver MUCH sooner and be the first Comicsgate project to beat it’s delivery date! 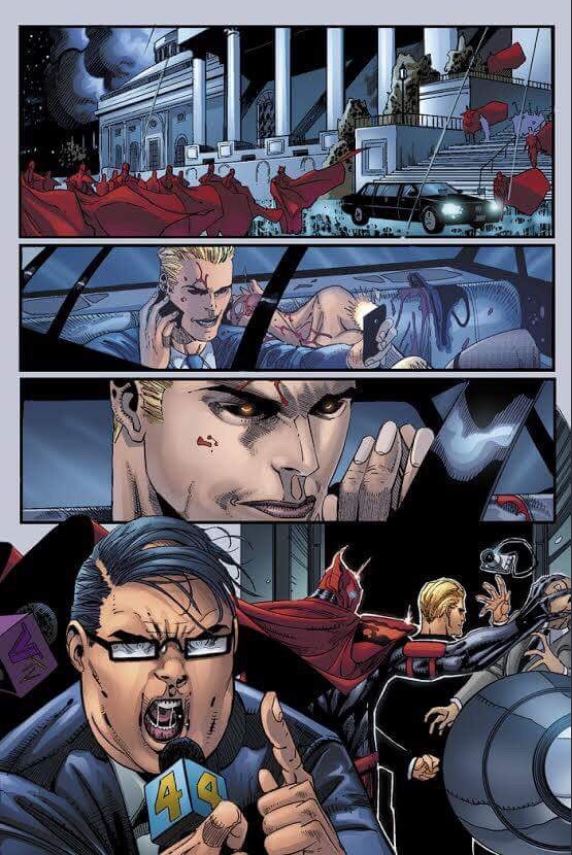 BF: How does it feel being an independent creator?

JM: The Comicsgate fans have made it so myself and others can work hard to offer them new comic characters like Image Comics did for me in my youth. We ARE the next revolution in comic books because of their support and I couldn’t be happier with what the future holds.

BF: Thanks for taking the time to speak with us Jon. We’re rooting for you!

JM: Thanks so much, I’m rooting for all of us!

Check out the Graveyard Shift Indiegogo campaign which kicks off today!