by Jamison Ashley
|
In January, it was reported that comics shops were down five figures in sales in 2017. When Diamond released their December and year-end numbers, they confirmed that periodicals (floppies) were down 10.4% in 2017, and graphic novels were down 9.38% for a total decline of 10.09% in the comics market.
Now, when combined with the graphic novel market and digital sales, overall the market still slipped 6.5% in 2017, with sharper declines in comic store and newsstand sales mitigated by stronger sales in the book channel and digital, according to a new joint estimate by ICv2’s Milton Griepp and Comichron’s John Jackson Miller.  Total comics and graphic novel sales to consumers in the U.S. and Canada remained above $1 billion at $1.015 billion in 2017, a $70 million decrease from sales in 2016.

“After a multiyear growth run, the comics shop market gave back some of its gains in 2017, with lackluster response to new periodical offerings and, consequently, graphic novel sales,” Miller said.  “The third quarter of 2017 saw the worst of the year-over-year declines, leading into what has turned out to be a stronger spring for stores in 2018.”

“While there was some softness to the market in 2017 (which we attribute to cyclical rather than secular change), there were positive signs,” Griepp said.  “The relative strength in the graphic novel and digital markets, especially the growing market for kids titles across print channels, bodes well for the future.”

Digital sales were flat, the strongest performance of any channel in 2017.  The book channel (mass and specialty retail chains, online, independent bookstores, book fairs) was the strongest print channel, with only about a 1% decline, helped by booming sales of kids’ graphic novels.  The comic store channel, the largest channel overall, dropped around 10%, while the smallest channel, newsstand, shrank to a size not seen since the dawn of comics as the last remaining DC comics left newsstands in August. 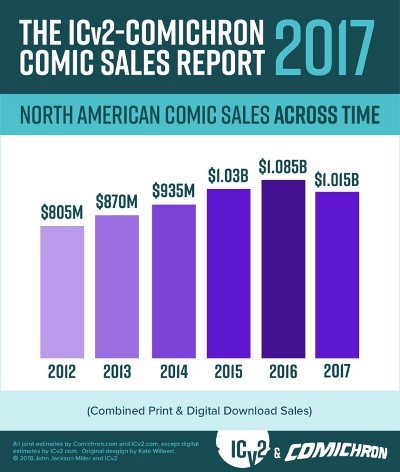 As presented above and in the accompanying infographics, the analysis by Comichron and ICv2 was divided up between periodical comics, graphic novels, and digital download-to-own sales.  All print figures are calculated based on the full retail price of books sold into the market, and do not account for discounting or markup.  Digital sales do not include subscription or “all you can read” services. This is the fifth joint market size analysis from ICv2 and Comichron; the first was for 2013 sales. 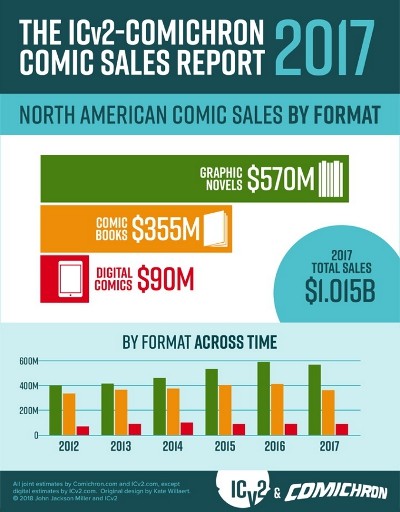 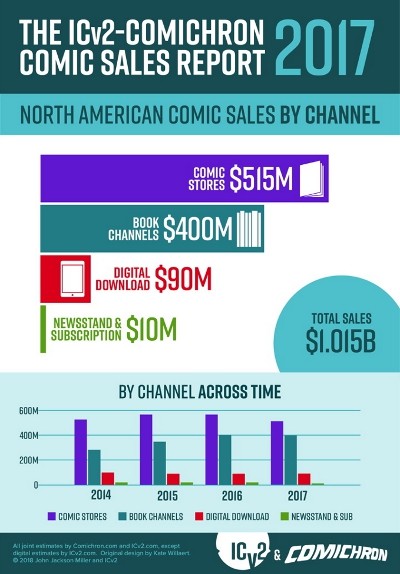 While this joint effort doesn’t disclose units sold, they are also not accounting for discounting — meaning that this is presuming that all this is basically what revenue the market would have generated if everything were sold at cover prices. Then again, they are also not accounting for markups either, and there are quite a lot of variant comics that are likely sold for more than what Diamond invoiced for them. Comichron regularly reports periodical units sold by Diamond; showing 89.44 million copies sold in 2017, versus 99 million in 2016, which is nearly 10% drop in units. Also interesting to note that sales were actually below 2015 numbers, so this is a serious step backwards.
Some might argue that book fairs aren’t reported by Diamond, and that they are likely taking up the slack, but the fact is that most schools who host a book fair only host one per year due to the difficulty in planning and organizing a book fair. Furthermore, the books sold at book fairs are usually sold at cost or heavily discounted. Pretty much a non-entity in comic book and graphic novel sales.
Comic book writer, Ron Marz, took a break from writing (**yawn**) another anti-Trump tweet to show that he was taking the news of another comic book sales slump in stride. Here’s his take from from safely inside his meticulously curated echo-chamber. 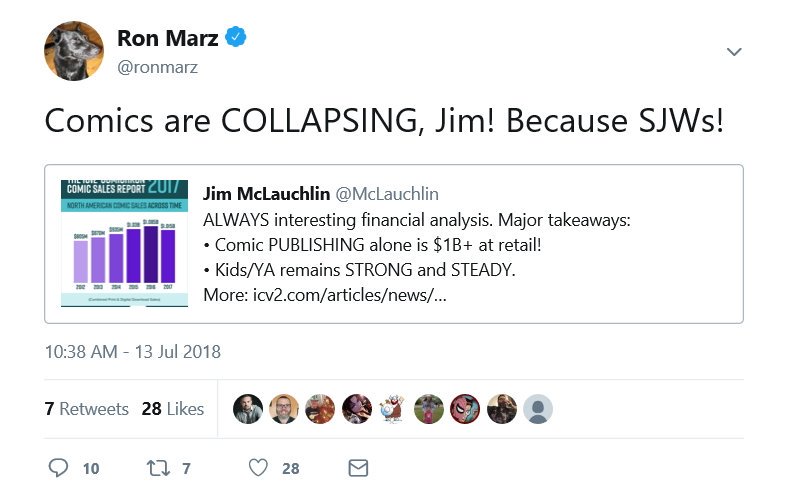 Others weren’t as upbeat. 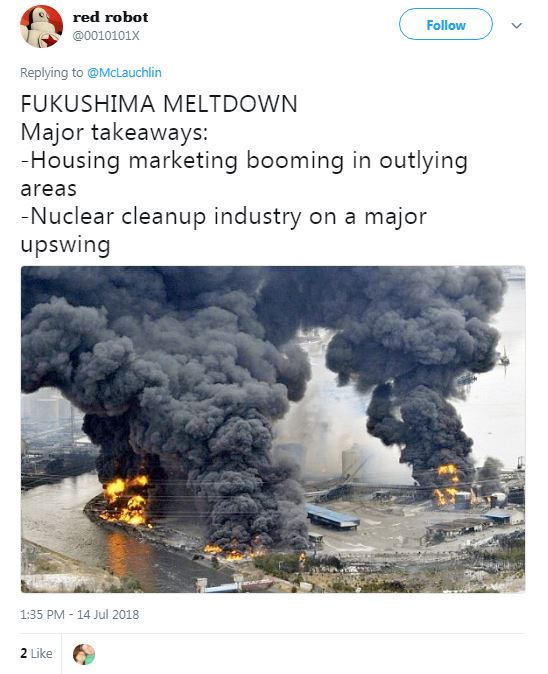 What are your thoughts on these numbers?

ICv2
ICv2 is the #1 industry source on the business of geek culture, including comics and graphic novels, hobby games, and showbiz on its website, www.ICv2.com, and in its magazine, Internal Correspondence.  For the people on the front lines of the geek culture business, staying ahead of the trends isn’t something that can be left to chance-it’s a basic necessity for being successful.  That’s why ICv2 is the #1 source of news and information for the buyers, gatekeepers, and tastemakers on the front lines.  ICv2 is where trend-watching is a science.

Comichron
Comichron is the world’s largest public repository of comic-book sales figures, featuring data from the 1930s to today about comic book and graphic novel circulation, cover prices, and market shares on its website, www.comichron.com.  With data and analysis on the distant past as well as the present, Comichron serves as a trusted resource for academics studying the historical reach of the medium and for collectors seeking accurate information about how many copies of a comic book originally circulated.