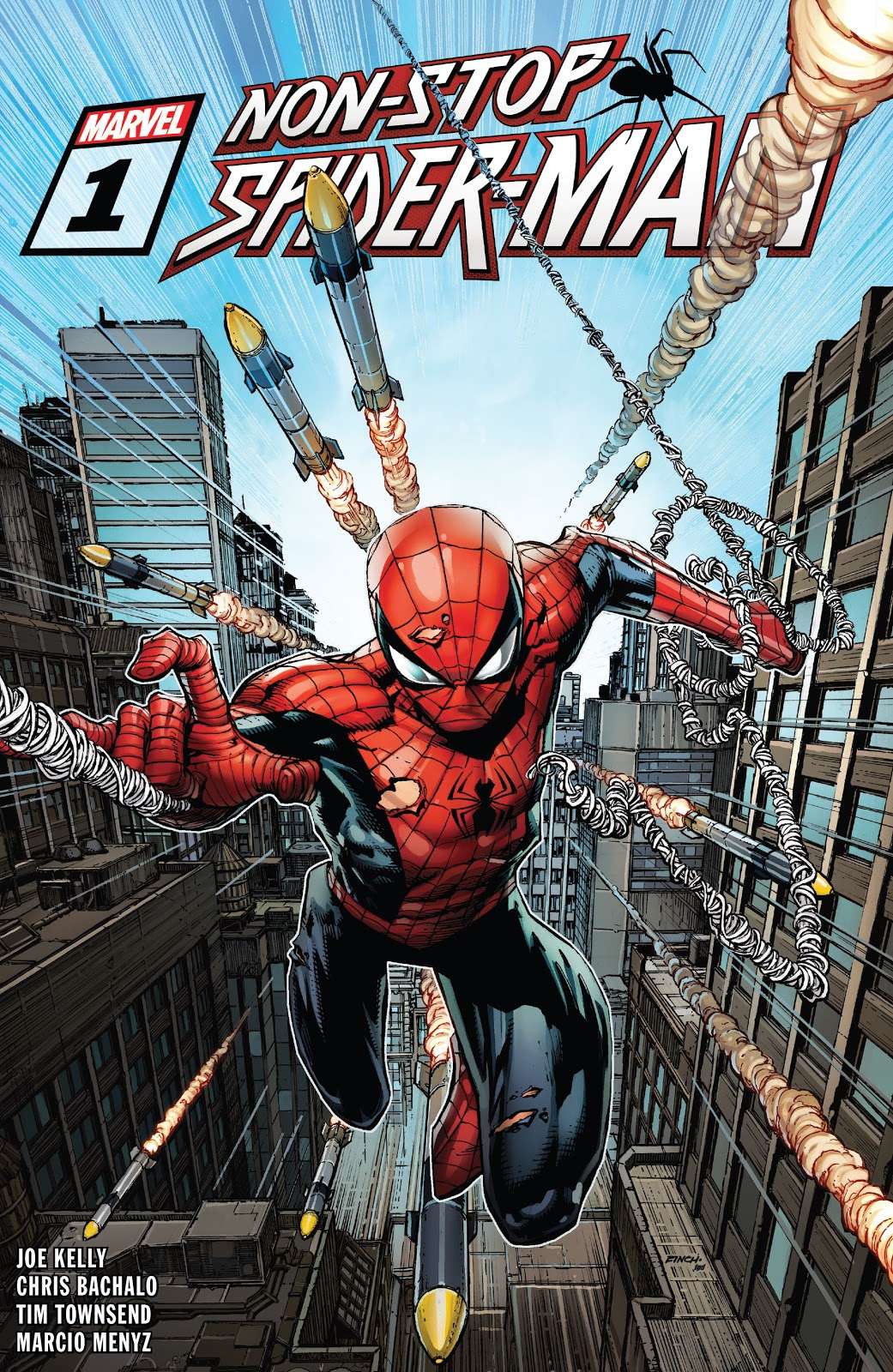 A mystery at Empire State University thrusts Spider-Man into an adventure that starts in uptown Manhattan and will take him around the world, pitting him against Marvel Universe villains old and new and give you a Spider-Man adventure (and Spider-Man) the likes of which you’ve never seen. It begins with the death of a friend and fellow student that sends Spider-Man on a non-stop mission to find the cause of death. What starts as a simple mystery for the web-slinger escalates into an explosive chase through the city with high-tech thugs and drugs. 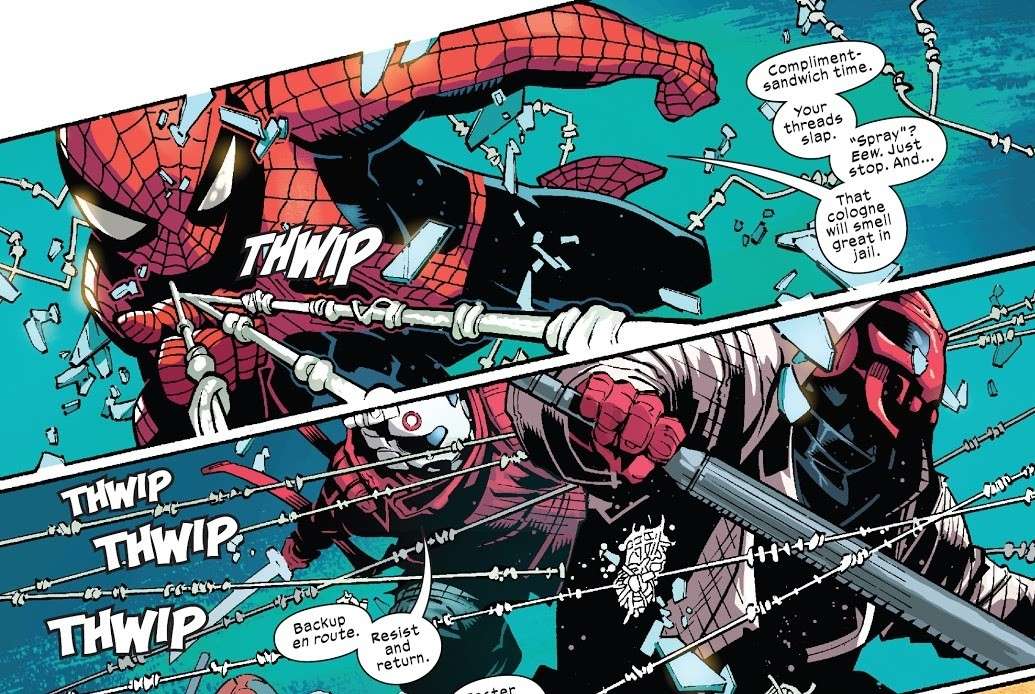 Billed as a non-stop action-packed adventure this comic does indeed deliver on the action. Page one thrusts you out a window and into a fight in the NY city streets. Peter’s inner dialogue even fits this fast-paced concept. This proves to be a double-edged sword though. Most comic readers like action, but it always depends on how it’s executed. Artist Chris Bachalo can do action well, but in this, it doesn’t really show.

The constantly tilted and small panels really confuse what’s happening and actually make the action less dynamic. You can see the hits and dodges, but it doesn’t really flow in a way that your eye can follow. It’s far more static when compared to his other work on titles like Dr. Strange and X-Men. So yes, it’s very action-packed, but it’s hard to follow every panel feels like they are posing with each other and not really fighting. Compared to Dale Eaglesham’s art in the back-up story Chris’ sticks out as disjointed and static. Again, the tilted panels don’t help this either. When the panels aren’t tilted though it’s far better. This is a shame because the best part of Spider-Man comics is watching him swing and fight as an acrobat. 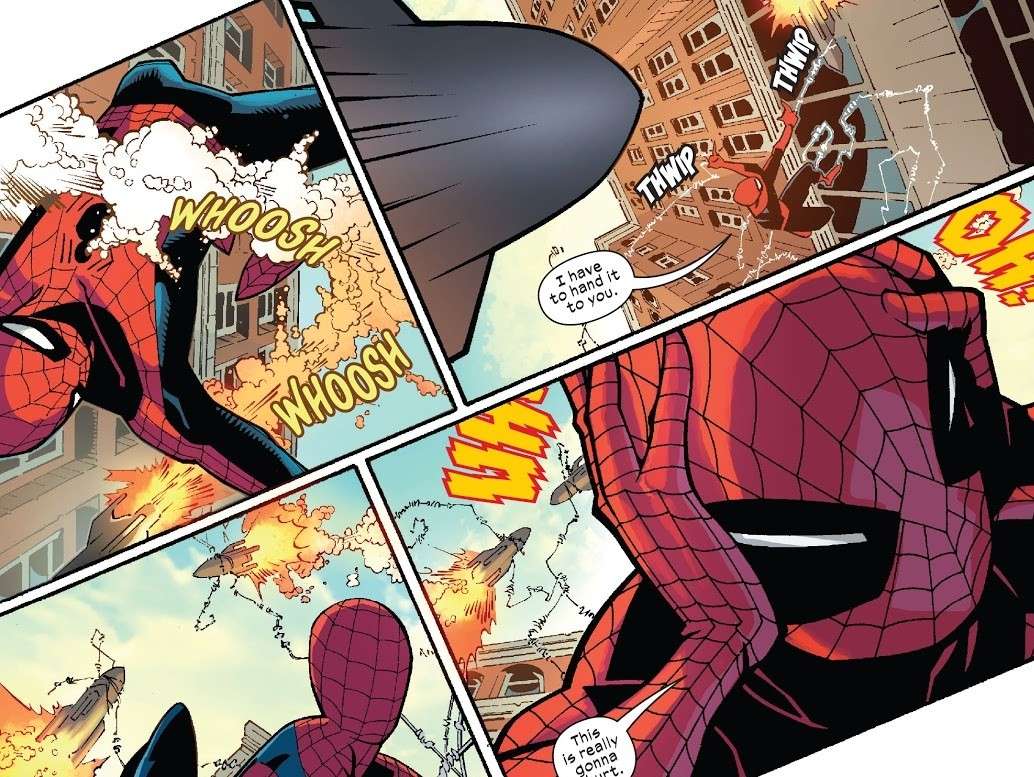 With Joe Kelly writing this, there is some hope for the story. He is really good at creating a strong narrative with dialogue that wraps it up in a nice bow. The catalyst for this story is a new drug students are taking which may be responsible for his friends’ death. This takes us down the path of Pete using that famous underrated genius to do some detective work and solve the mystery. This is the first issue, so it’ll be interesting to see how they balance a mystery with action.

Normally when a story focuses on solving a mystery there is less action. so it’ll be a balancing act for sure. it’s very clear this is for a younger audience though. There is some dialogue that makes you cringe, but as a grown man reading this maybe I cringe where a younger person wouldn’t. The famous “drugs are bad m’kay” comes through loud and clear too. There is even a helpful number in the issue to call for substance abuse help. A nice touch that really smacks the message across your face. but in a time where not many people talk about the dangers of drug abuse anymore, it’s nice. Hopefully, someone uses it to get help if they need it.

With a strong leaning towards a younger audience, I can safely say this isn’t a comic that older readers will likely enjoy. It’s indeed heavy on the action as promised, but the messaging and the dialogue are ham-fisted. Not recommended.