Classic ‘Iron Man’ Story Would Be Ruined By Today’s SJWs 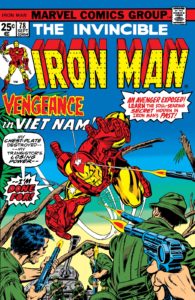 We all have a few — or maybe just one — single-issue comic book(s) that truly stand head and shoulders above the crowd. As a life-long Iron Man fan, one favorite issue isn’t a David Michelinie/Bob Layton tale like something from “The Armor Wars” (Iron Man #225-232) or the sensational “Demon in a Bottle” (Iron Man #128). Indeed, the best single edition of the Golden Avenger is Iron Man #78 — 1975’s “Long Time Gone” written by Bill Mantlo and drawn by stalwart George Tuska.

I’m not the only one who feels this way; it was voted one of the best by fans and included in the volume 3 “monster” issue of Iron Man, volume 3 #46.

Incredibly, this was a fill-in issue; back in the days when deadlines actually mattered, if the scheduled story wasn’t ready Marvel would rush in a stand-by story. Mantlo’s tale may be the best of such.

Told in flashback format, Tony Stark reminisces about a return to the country which birthed his superhero alter ago — Vietnam. Keep in mind that at the time this was written, the United States’ involvement in that country had recently come to an end after a decade of war … and 58,000 dead American soldiers. Nevertheless, Mantlo doesn’t overtly take sides — he merely asks questions, the same ones that many Americans (and Vietnamese, and others) grappled with since the early 1960s: Why were we (the US) there in the first place? Was the manner in which we fought the war wrong?  Who was Stark to design weapons for such a war?

Certainly, Mantlo’s take is quite different from that of Stan Lee in the early-mid 1960s. Lee’s early tenure at Marvel featured the much more black and white, “good vs. evil” democracy vs. communism paradigm, and his superheroes reflected that. Stan’s Tony Stark from Tales of Suspense #39 (Iron Man‘s first-ever appearance) is markedly different from Mantlo’s because the latter’s Stark has had over a decade to reflect … as we all did.

In “Long Time Gone,” Iron Man is back in ‘Nam to supervise the field test of a new Stark weapon — a satellite-assisted super gun “able to fire a 50-pound shell into an enemy encampment at a distance of over 20 miles.” Things quickly go awry, however, as the gun is destroyed by the North Vietnamese shortly after it’s fired. The troops on both sides of this particular battle are all slaughtered, and in the process Iron Man‘s armor is gravely damaged by an enemy missile. 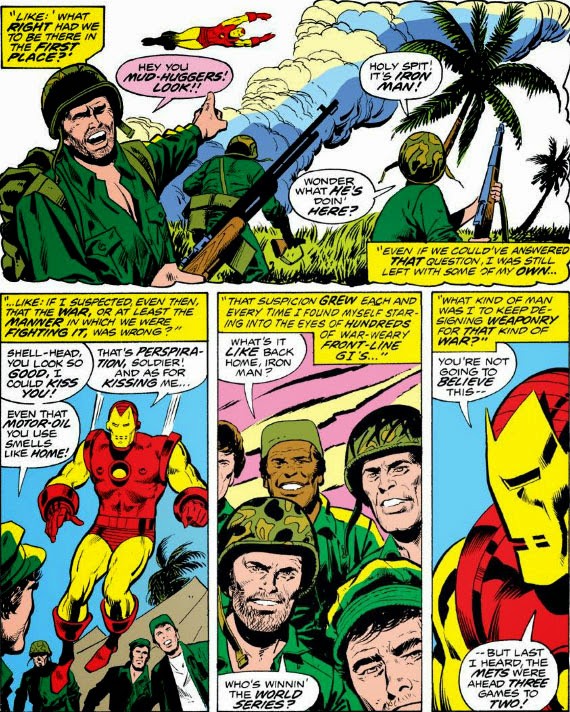 When Iron Man awakens after several hours of unconsciousness, he encounters a young Vietnamese boy who begins firing at him with his rifle. Enraged by what had befallen the U.S. soldiers, Iron Man lashes out, wacking the youngster clear across a field. When he goes to grab the youth to make him look at the carnage his side has caused, he discovers the boy is blind. He had only fired at Iron Man because he had heard English, thus believing it was a US soldier. The boy pleads with Iron Man with the only English word he knows: “Please.”

The issue from here on out features a long soliloquy by Stark from inside his iron shell. The boy now hoisted upon his shoulders, Iron Man eventually encounters the utterly destroyed target of his super gun, the youth’s village. In a series of incredible panels by artist Tuska, Iron Man digs a mass grave for the dead with his repulsor beams. But that’s not all: After the grave is dug and covered, Shellhead uses his repulsors to carve a huge “WHY” into the ground adjacent to the burial ground.

As AV Club notes, “as the Vietnam War became more unpopular, so too did Marvel’s superheroes stop trying to win it,” and this issue of Iron Man is proof of that. In 1968 Stan Lee told an audience “I would never defend the war in Vietnam. I think it’s an utterly indefensible war. I think it’s a ridiculous war.” But this didn’t mean he or other Marvel employees would begin proselytizing an anti-war stance in the company’s books. Why?

According to Marvel Comics: The Untold Story, “the letters coming in were almost evenly split between support for and opposition to the Vietnam War.”

Does anyone think something like this would happen today?

If a contemporary creator had penned Mantlo’s story, consider the following panel: 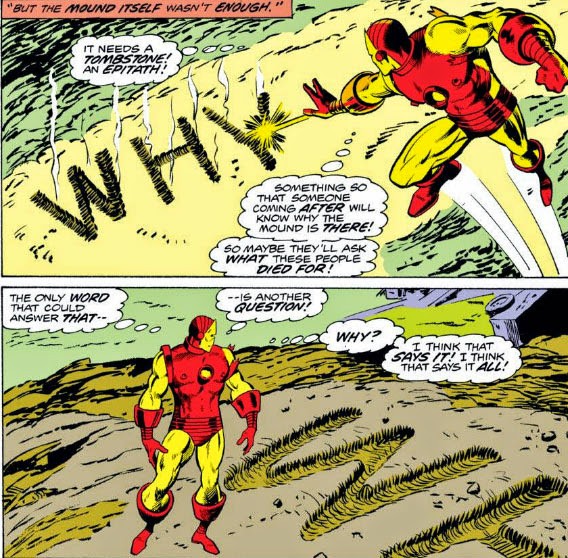 –The “WHY” carved by IM’s repulsors would be replaced “FUCK the U.S.”

—Iron Man thinking: “Nixon needs to be buried — with this as his epitaph! So people know that it was HE who is responsible for all this death and destruction! The only phrase appropriate for this is just what I wrote. I think that says it all!” 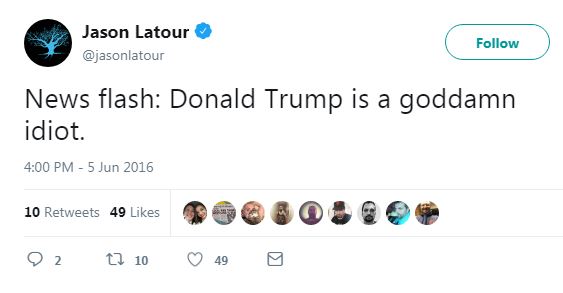 Meanwhile, on social media fans would be asking, among other things, why there was no mention of Lyndon Johnson in the book, only Richard Nixon. In response, the creator(s) would lie through their teeth that Johnson “wasn’t nearly as bad as Nixon” (because he was a Democrat) … much like how Marvel (and DC) treated Barack Obama like a god (remember the fist-bump with Spider-Man?) despite the fact that some of his actions were the same illegalities in the never-used Nixon articles of impeachment. 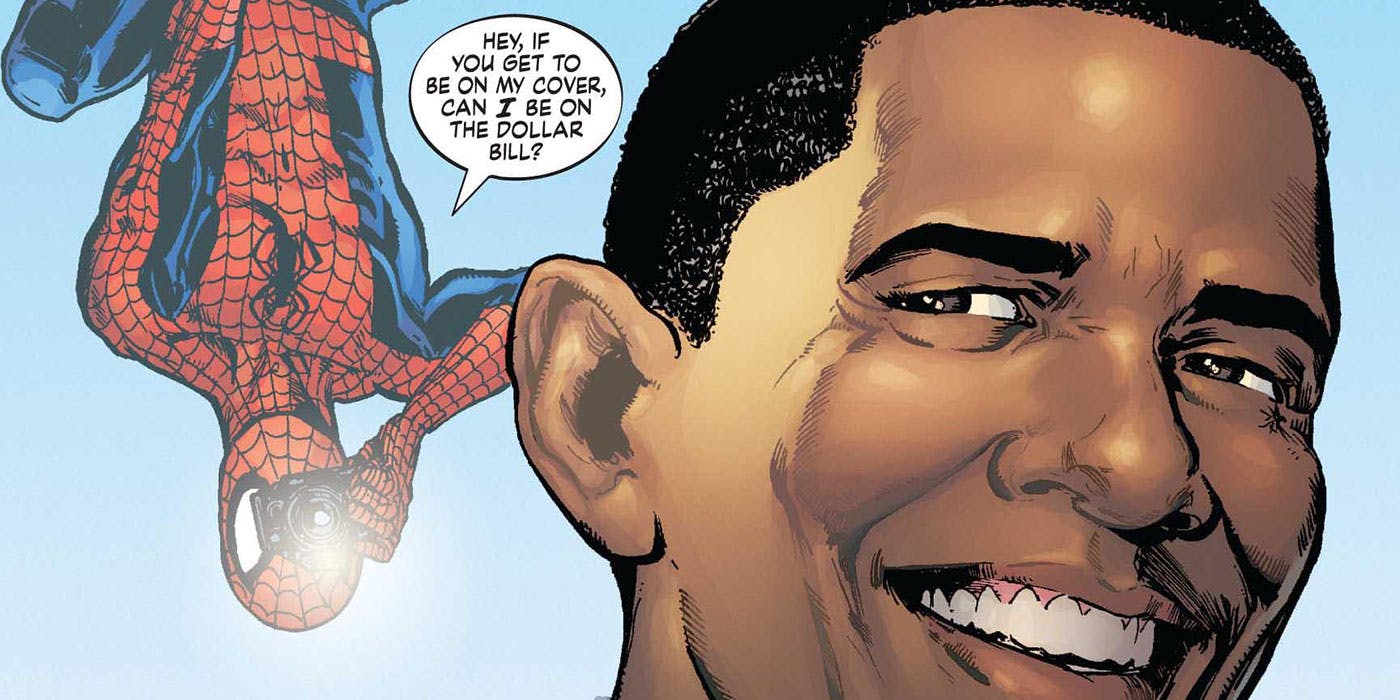 Let it not be said that modern Marvel writers are well-versed in history. For instance, during his tenure on Iron Man in the early 2000’s, Joe Quesada wrote that the United States had “extensively” tested nuclear weapons in the South Pacific during World War II. Yours truly wrote a letter (printed in IM a few issues later) reminding Joe that we had tested just one A-bomb — in the New Mexico desert — before nuking the two Japanese cities to end the war. The former Marvel editor-in-chief also claimed in an interview regarding the controversial series The Truth that the majority of the US military is African-American. (It’s not even close.)

Captain America going after the Tea Party (for what? Complaining about federal spending and the outrageous cost of ObamaCare?). Writer Mark Millar comparing the Batman character in his Elseworlds tale Red Son to al Qaeda (he was fighting against Soviet tyranny!) Former Spider-Man artist and now-Image bigwig Erik Larsen stating that George W. Bush was “worse than Richard Nixon.” Captain America wondering if the US “deserved” the hatred of Islamic radicals … and if Allied bombing of Dresden, Germany during World War II was akin to the 9/11 World Trade Center/Pentagon attacks.

Comics in the years 2009 through early 2017 saw none of this regarding the American chief executive and American foreign and domestic policies. Contemporary creators are just like other political social justice warriors: They’re completely convinced of their moral righteousness, and as such their critics aren’t just people who disagree — they’re evil. Don’t believe me? See for yourself. 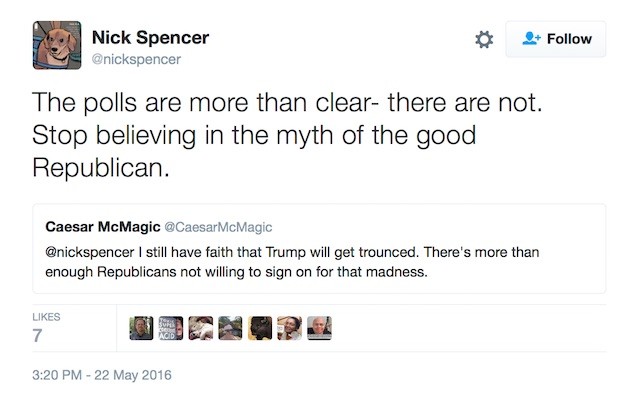 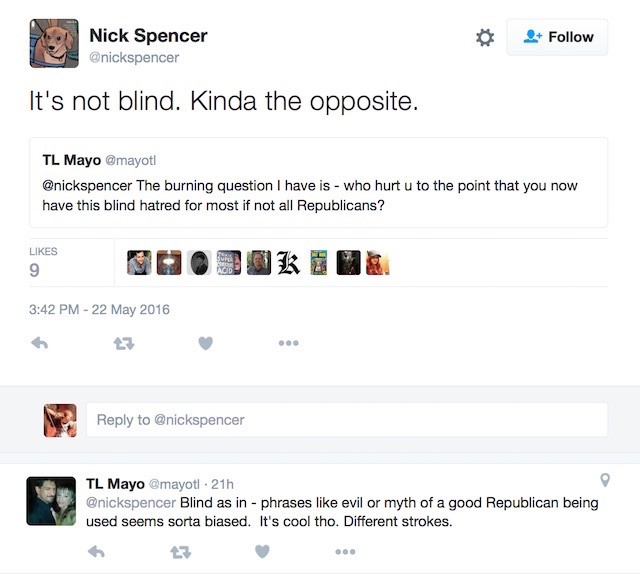 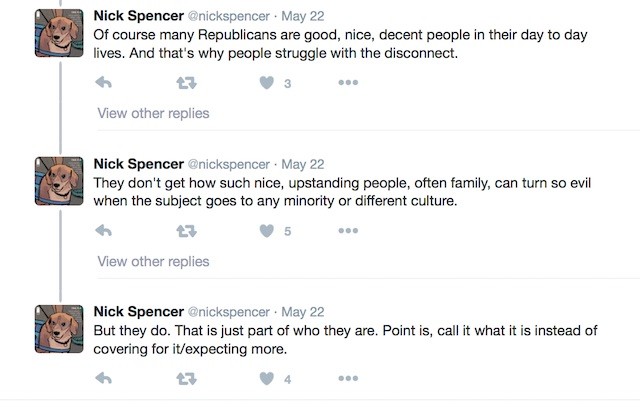 Always remember: They hate you.