“In speaking with Cecil, neither one of us realized the cover would be so polarizing. We discussed and are not moving forward with the cover or the campaign.” – Nick Barrucci, CEO & Publisher of Dynamite

Those that were so disturbed by a @dickandcomix cover from @DynamiteComics should just take Kelly Sue Deconnick’s advice.

She’s one of their approved creators, isn’t she? pic.twitter.com/PO2sWiJXmQ

Dynamite Entertainment, the comic book publisher of Vampirella, Red Sonja, The Boys, Bettie Page, and other popular titles, is being harassed online by outspoken comic book creators who moonlight as activists over the publisher’s support of any creators who are associated with the Comicsgate consumer movement. Yesterday, writer Mark Russell, writer of comic books that sexualizes the Wonder Twins for DC and his  ‘Son of God‘ Jesus-parody announced he plans to end his relationship with the company as long as Dynamite was associated with Comicsgate.

Comicsgate is best described as an online consumer movement promoting the idea that the comic book industry is overly saturated in promoting political messaging that is meant to appeal explicitly to only one demographic that is not interested in the medium, to the detriment of the existing consumer base and the industry as a whole. It also addresses the lack of professionalism, inclusivity, objectivity and accountability of the publishers and their employees when dealing directly with the customers. Although the group’s message is about ‘making better comics,’ they are repeatedly accused of harassing marginalized creators or being Trump supporters because they don’t treat any of the “marginalized” creators any differently than any other creator. They don’t want politics in their comics, they just want to be entertained.

Many openly hard left activists (who also work in the comics community) have ridiculously denounced the loose-knit group on multiple occasions and are supported by the shill media, but when Dynamite Comics recently tweeted support for ‘Cecil’ and planned to put out a variant cover featuring Vampirella, Red Sonja, and Cecil via an Indiegogo campaign, many creators lost their minds. Cecil is a Youtube comedian provocateur that openly brands himself as Comicsgate, and was present when CEO Nick Barrucci supported artist Billy Tucci on a live stream hosted by Ethan Van Sciver (Green Lantern, Cyberfrog). When leftist Twitter trolls started tweeting about it, many social justice minded creators were flabbergasted and cried that they no longer felt that Dynamite was a safe space for them. 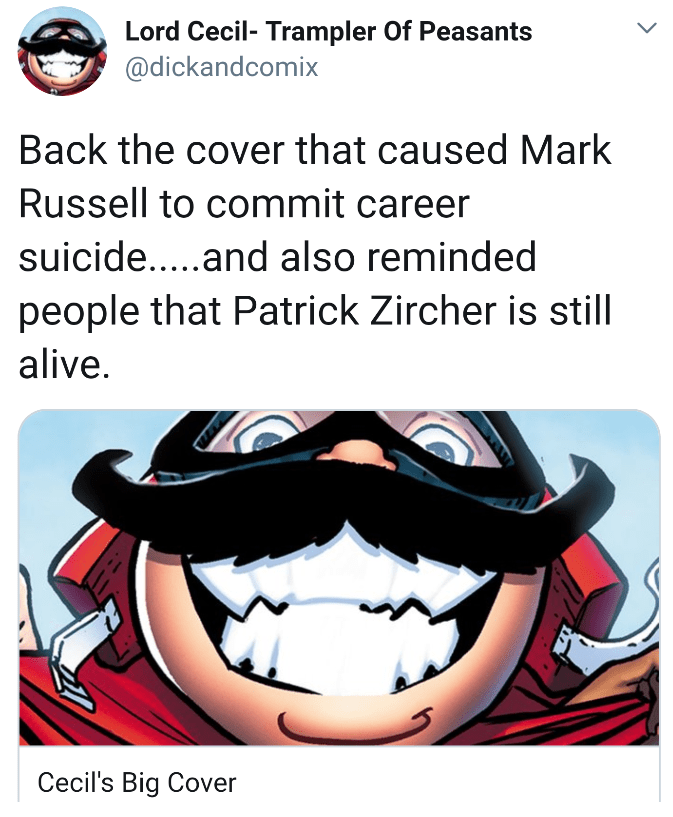 Once the usual suspects started crying about the retweet, many creators who both have and have not done work for Dynamite quickly virtue-signaled on Twitter that they would no longer work for the publisher until their association with the group was ceased. Gail Simone, who’s run on Red Sonja increased Dynamite’s visibility, said she was very disappointed and saddened that Dynamite would publish anything she didn’t approve of.

I’m taking a minute to process something personally very disappointing and sad.

If I’m not doing that on your timer, don;t know what to say.

Mark Russell, the current writer on Red Sonja, said he won’t be continuing his relationship with Dynamite as long as they promote Comicsgate projects. Looks like 2021 is going to be a tough year for Mark. Or not, if Dynamite bends the knee.

As I write this, I am finishing work on Red Sonja #24, which concludes my contractual obligations to @DynamiteComics. After which, I will no longer be accepting any further work from Dynamite for as long as they continue any affiliation whatsoever with Comicsgate. 1/

Karla Pacheco ended her relationship with Dynamite and said she would donate proceeds from her work on Bettie Page to the Trevor Project, Trans Lifeline, and the Okra Project. A weird flex since many gay creators actually support or align with the ComicsGate movement and there is no evidence that any CG related creators have ever harassed gay, lesbian, or trans creators, unless you count criticism as harassment these days.

The proceeds I made from the series will be going to the @TrevorProject, @TransLifeline and @TheOkraProject

That's all I have to say about that.

There were also tweets from more creators, comic shops, and comic websites revealing they were ending their relationship with Dynamite unless something changed. Here’s an ironic tweet since this is the same person ready to cancel Antarctic Press comics a couple of years ago over the Jawbreakers comics.

I will no longer be stocking Dynamite Comics titles at the store. https://t.co/llpL77t5a7

I would encourage readers to look through the Twitter timelines of these people to see what really matters to them and notice that they certainly spend a lot of time marginalizing people they disagree with. Gail tweets 5000 times a day, so don’t go too far down that rabbit hole. Most of the creators making a stink online are C-listers at best. If Dynamite Comics can simply ignore Twitter, the self-righteous SJWs will be moving on to their next target in a week.

There’s always someone else to destroy for wrongthink, even if your opinion has no bearing on the matter.

Dynamite Entertainment hasn’t commented on the backlash and that is their best strategy. Perhaps if they will ignore this manufactured “controversy” and let all their inferior interior artists exit the company, Dynamite can hire some of the very talented Comicsgate artists I’ve been seeing while looking into this story. Dynamite’s covers are always great, but most of their books’ interior art could use some improvement. Let’s hope that’s all that comes out of this dust-up.

UPDATED: We have just been informed that Dynamite is prepared to pull the cover and bend the knee to Cancel Culture. What a shame.

“Who dares not offend cannot be honest”- Thomas Paine

And now I present to you the “leader of Comicsgate.”