UPDATE: Jae Lee has responded below

DC Comics creator Tom King must be bored this weekend with San Diego Comic Con going to Zoom meetings instead of people paying him for autographs in person. On Friday, he confirmed that his White Male Privilege™ is real by taking to Twitter to cry over a cover that comic artist Jae Lee had done several months ago for Ethan Van Sciver’s self-published Cyberfrog: Rekt Planet which was revealed publicly well over 6 months ago. Van Sciver debuted the cover in a tweet that included a #Comicsgate hashtag and remarkably that comic book crowdfunding campaign has raised over 1 million dollars so far. 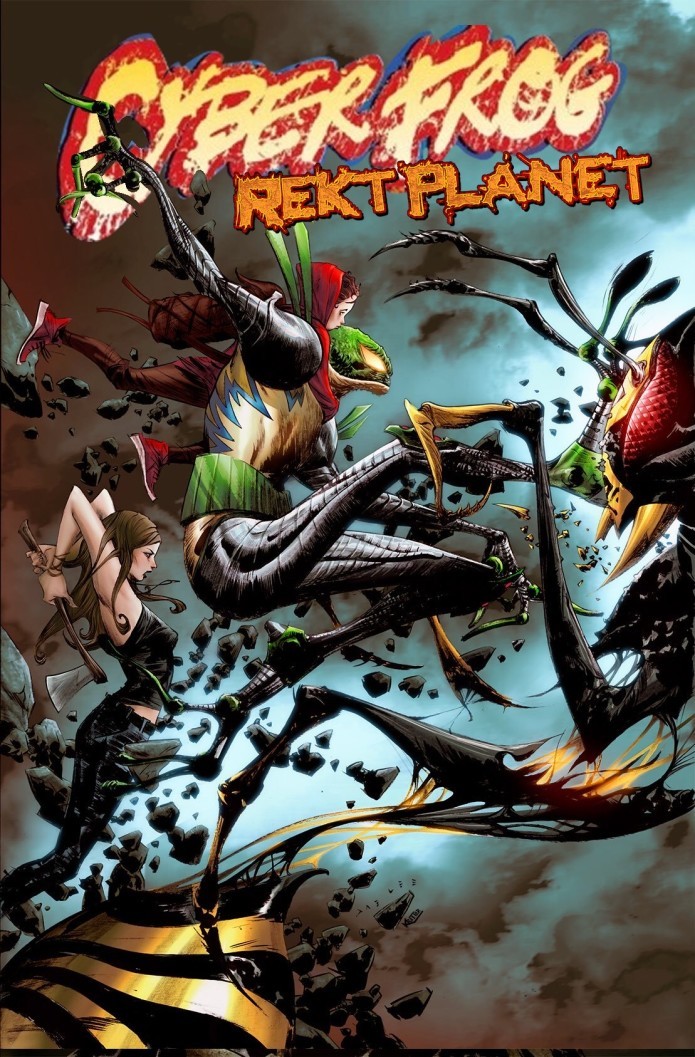 Now, six months after Jae Lee did a cover for an Ethan Van Sciver comic, Tom King thinks it’s the right time to throw his fellow and former DC creators, along with publisher DC Comics, under the bus for what King considers the crime of Jae Lee’s alleged ‘wrongthink’ over having any association with a consumer movement that King disagrees with. In fact, he and many other progressives and misinformed readers and retailers have labeled ComicsGate a “hate group.” Nothing could be further from the truth, but he’s not alone in his willful ignorance.

It looks like Tom King has become another member of a hateful “Cancel Culture” that we’re hearing about more and more these days. Is this just another example of slacktivism, or better yet – attacktivism? Why couldn’t Tom King confer with his fellow creator before trying to destroy his career? I guess his empty pledge to the Whisper Network just wasn’t enough. He has to go after other creators that don’t even work for him over things that are none of his business. Oh, but don’t worry comic book fans. Tom ended up having a conversation after trying to ruin Lee’s career, and Jae apparently explained that he neither knew nor cared about the childish, Twitter, cape drama that Tom is clearly thirsty for. King reports that they’re “all good” now and Tom has confirmed that Jae never supported “hate of any kind”.

Does that include Tom’s hatred too? Because you must really have to hate someone to try and publicly destroy their career without cause or confirmation.

I spoke with Jae. He’s not on Twitter, didn’t know comicsgate existed, and doesn’t support hate of any kind. We’re all good. Best possible outcome.

In spite of Tom King’s opinion, shared by many other politically progressive comics creators, Comicsgate is actually a movement involving several comic creators and fans who have spoken out against what they feel is an overabundance of progressive politics, forced diversity, disrespect for legacy characters, hiring practices based on identity politics rather than merit, and blatant social justice activism in both the comics as well as the modern comic book industry at large.

The ComicsGate movement has developed its own loose knit community, with former DC-exclusive creator Ethan Van Sciver being one of its loudest voices.  One look at the Twitter feeds of King’s fellow white male activists like Dan Slott, Nick Spencer, Mark Waid, Tom Brevoort, and their allies in the Whisper Network, and it soon becomes very clear why thousands of fans have been turned off and are now putting their money towards things like Cyberfrog and other CG adjacent projects instead of mainstream comics.

You’d think a guy who is always bragging about how he once worked for the CIA would have accurate information, so he’s either an assclown, or just another typical black hat spook engaged in a disinformation war against his perceived enemies in #ComicsGate pic.twitter.com/pzAa3tNl2H

All this begs the question, did Tom King only just now find out about Jae Lee’s ‘problematic’ artwork? Was he informed by other political activists in the ComicsHate movement (the nickname for those who are anti-ComicsGate)? Does he just hate Asian people? Is he a proud member of ‘Cancel Culture’? All of these could be true, but if even just one of them is true, which seems likely, Tom King is another big let down, just like his Batman run.

Jae Lee was sadly dealing with a family loss and is barely on social media, but responded on his Instagram to say that he and Tom are in fact “not all good.” And he sets the record straight.

Two weeks ago, June and I took Loki to San Diego to see a specialist. He did not survive due to complications from the surgery. This past Friday was supposed to be a day of mourning. We were back in San Diego to pick up his ashes. We were going to take him to the beach and comfort each other by sharing our favorite stories about our little boy. Instead, a part of the internet I avoid like the plague came barging in. I had companies I'm working for calling me, friends reaching out to me. I'm seeing hate pouring out of strangers' mouths, accusing me of things I have no knowledge of. I'm seeing first hand how fast lies are spreading. Let me be clear, I'm not part of ANY group. We never made it to the beach. We spent the entire six hour drive back home on an emotional roller coaster. I'm writing this because I'm angry. These irresponsible tweets are not harmless. They do not just go away. They have real world consequences. They can take away your job. Your life. Your memories. June and I were robbed of a special day. So, no, we're not "all good." This isn't the start of a conversation. This is the end. So please, don't drag me into a world I never wanted to be a part of, nor will I ever want to be a part of. I want to honor Loki by going back to producing art made with love. For people who enjoy it for what it is. Something that hopefully brings joy into their lives. Mommy and Daddy miss you so very much, Loki, our love.

Don’t even get me started on his embarrassing attack on former Superman actor Dean Cain.

Ah the “MF” was an insult because you used your platform to discourage people from wearing masks, which will cost lives—the opposite of what Superman would do.

I don’t know if I’m tough but I did fight for my country overseas and didn’t just wear a cape in front of a camera. pic.twitter.com/58Dvi9s6Fx

Seriously folks, who is demonstrating that they are “full of hate”? Maybe it’s time DC started enforcing their social media policies for creators again. This has gotten out of hand.

Just Some Guy and Captain Frugal both responded:

Tom King apologizes. Perhaps the best possible outcome for his foolishness. Let’s see if he dials it back from now on.