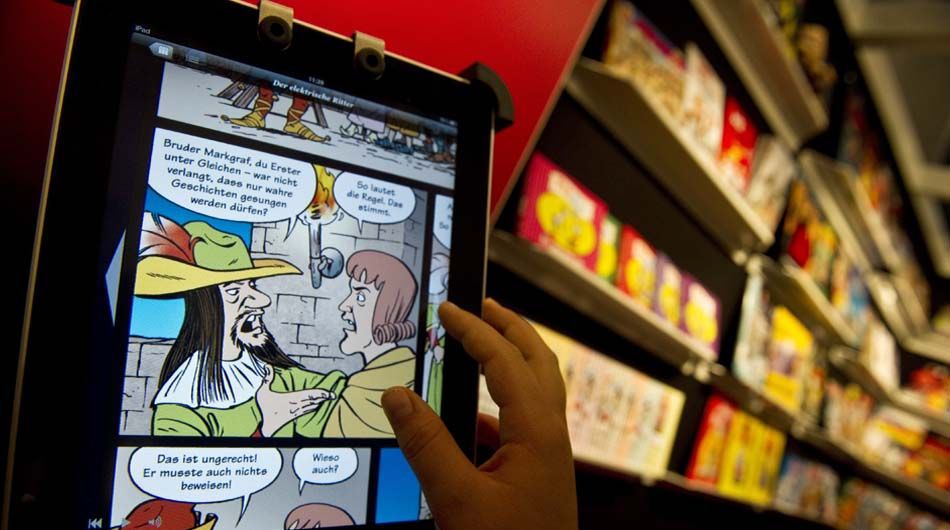 There’s been a lot of discussion lately of the value of digital comics. Many comic retailers are acutely aware that there are hardly any young comic buyers and they recognize that a large number of “millennials” haven’t been exposed to comic books in a tangible form. With this, and the falling sales figures of floppy books, the future of the comic industry is looking pretty bleak.

Kids these days are not as attached to “stuff” as previous generations. Most use their electronic devices to play games, watch movies, surf the web, read books, and chat with each other. Oh sure, some of them do collect “stuff,” but it’s collected digital items found in video games — the tangible aspect isn’t necessary. Will an appreciation for the tangible ever return?

In the meantime, digital comic sales are slipping.

“… digital copies of comics that you can buy and read online don’t have the same clout with publishers as sales of physical copies from traditional retailers — comic book companies like Marvel don’t release the digital sales of their individual comic books, making it hard to know how much of a difference they make.”

By all accounts, it doesn’t seem to be much. The digital comics market seems to have plateaued, along with the digital devices, such as iPads and other devices. If you’re not already a digital comics reader by now, it isn’t likely that you’re going to suddenly become one. That’s not to say the publishers aren’t trying.

Unlimited reader services, sometimes referred to the “Netflix of Comics” have stepped in to try to squeeze out a few more pennies from those back issues. Comixology Unlimited ($6 per month) and Marvel Unlimited ($6 to $10 per month) target slightly different audiences, but readers looking for cheap, simple ways to stream more comics have these services that offer an even more comprehensive experience.

But have these “unlimited” services begun to hurt regular issue per issue sales? With Marvel steadily publishing around 70-80 titles per month, how easy is it for those who may be “all-in” to stay caught up? And if you can pay around $7 to have a near unlimited supply of back issues, and even newer comics were on store shelves only a few months ago, why on earth would any digital comics reader pay full-price for even two comics (about $7.98)? So many readers tend to “trade wait” these days, meaning they wait a few months for a story arch to be collected in a single trade paperback or even a digital collection, that single issue sales have suffered because of it.

Marvel is now frequently cutting their digital collections to absurdly low prices in an effort to squeeze a bit more out of those books. As Rob Salkowitz writes at ICV2:

“If you’re a sharp-eyed shopper, you’ve probably noticed that Marvel has been running some crazy deals on digital trade collections for Kindle and comiXology, blowing out collections for 99 cents that are list-priced at $19.99.  Other publishers run the same kind of doorbusters on a regular basis, and subscription programs like comiXology Unlimited or Marvel Unlimited offer access to thousands of titles for a single monthly fee.

All this discounting means the effective price of digital back issues has crashed way under the “magic number” of 99 cents, the price point that everyone in the industry seemed fixated on just a few years ago.  It’s also fulfilled the prophesy that programs like Humble Bundle, which led the way in dumping piles of digital issues on the market for ridiculous prices, would eventually erode the perception of value for non-current material, permanently lowering the ceiling for profit margins on publisher back catalog in exchange for the sugar-high of short term revenue.

New release digital issues have, for the most part, held the line at the cover price of print editions.  But with so much cheap content floating around out there, including a lot of stuff from the last year or two that is still being talked about and is still relevant to continuity, how soon before we start seeing price cuts on new material that has to compete with the publisher’s own recent backstock?

And more fundamentally, is the current shape of the digital market a sign of health, maturity and evolution, or should we be concerned that the model is failing?”

As any fan of funny books knows, buying comics can be a prohibitively expensive hobby. Individual issues cost up to $5 for less than 30 pages of content, and especially when dealing with superhero stories, you may need to buy five or six issues per month just to keep up with big events. Collected editions aren’t much cheaper, often knocking only a few dollars off the total cost. Subscription comic services may not give you the newest issues, but they’ll give you thousands of stories you’ve never read before at about the price of a takeout lunch each month.

“Now that the market model for digital comics has settled and matured, with sky-high expectations marked down to reality, all the advantages of digital still remain to be properly exploited.  It’s just going to be a slightly different measure of success than what we first thought.”

However, as long as readers can just wait a few months and Marvel will discount the digital collections, as seen above, how many are really going to continue to pay retail, even at a slight discount, for new books? Why not just wait? There’s plenty of other material to consume while they wait. Furthermore, the concern of digital rights (DRM) of comics and other books is also a factor. You don’t actually OWN the digital comic you just paid for. Marvel can edit it or even remove it at their discretion. A lot of readers have avoided digital altogether once they realize they can’t share or resell those books, in addition to knowing they may not even be able to keep them in the long run.

Personally I have hundreds of digital comics in my “collection.” Most of those are from the free copy offered by Marvel when you purchase the physical copies. Several others are from Humble Bundle offers. But try as I might to read my books on the iPad, I still prefer a tangible copy in my hand. As the great Stan Lee is claimed to have once said in regards to digital comics: “Comics are like boobs. They look great on a computer, but I’d rather hold one in my hand.”