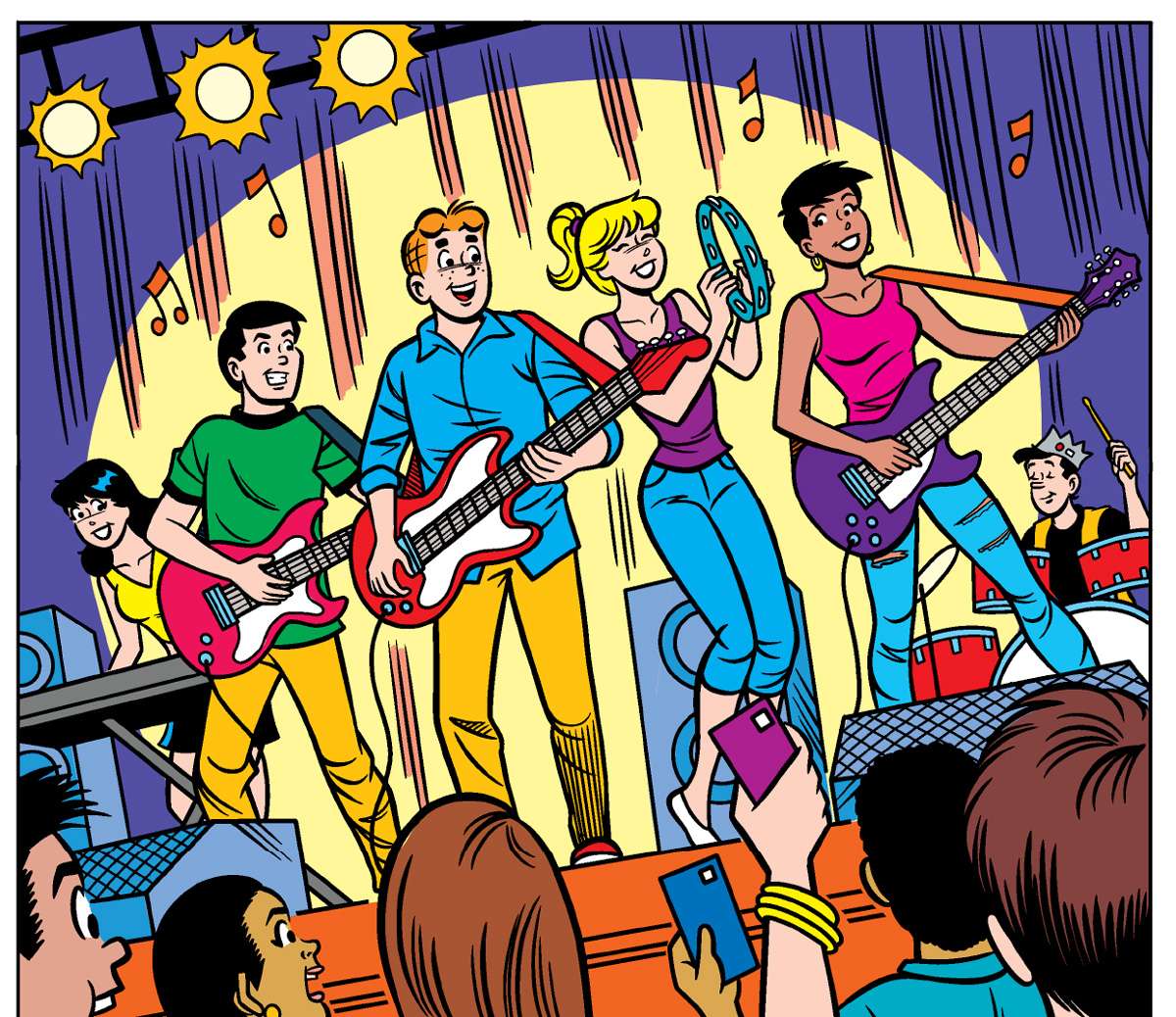 Archie Comics and The Children’s Tumor Foundation (CTF) are pleased to announce that the latest issue of ARCHIE JUMBO COMICS DIGEST will introduce the first hearing-impaired member of Archie’s iconic cast of characters. Meet Grace Alondra, who also marks the first time a character living with neurofibromatosis (NF) or schwannomatosis has appeared in the pages of a comic book from a major publisher. Grace will make her debut in an eight-page short called “Sounds Like Music” that will appear in ARCHIE JUMBO COMICS DIGEST #329, available today everywhere comics are sold.

Archie Comics worked with the Children’s Tumor Foundation to create this character in order to shine a light on the many individuals living with NF2, a genetic disorder that causes tumors to grow on nerves in the body, and which often leads to hearing loss. The disease affects 1 in 25,000 births of all populations equally. The comic is part of the Foundation’s global awareness campaign that launches at the end of April and continues throughout May, which is NF Awareness Month. 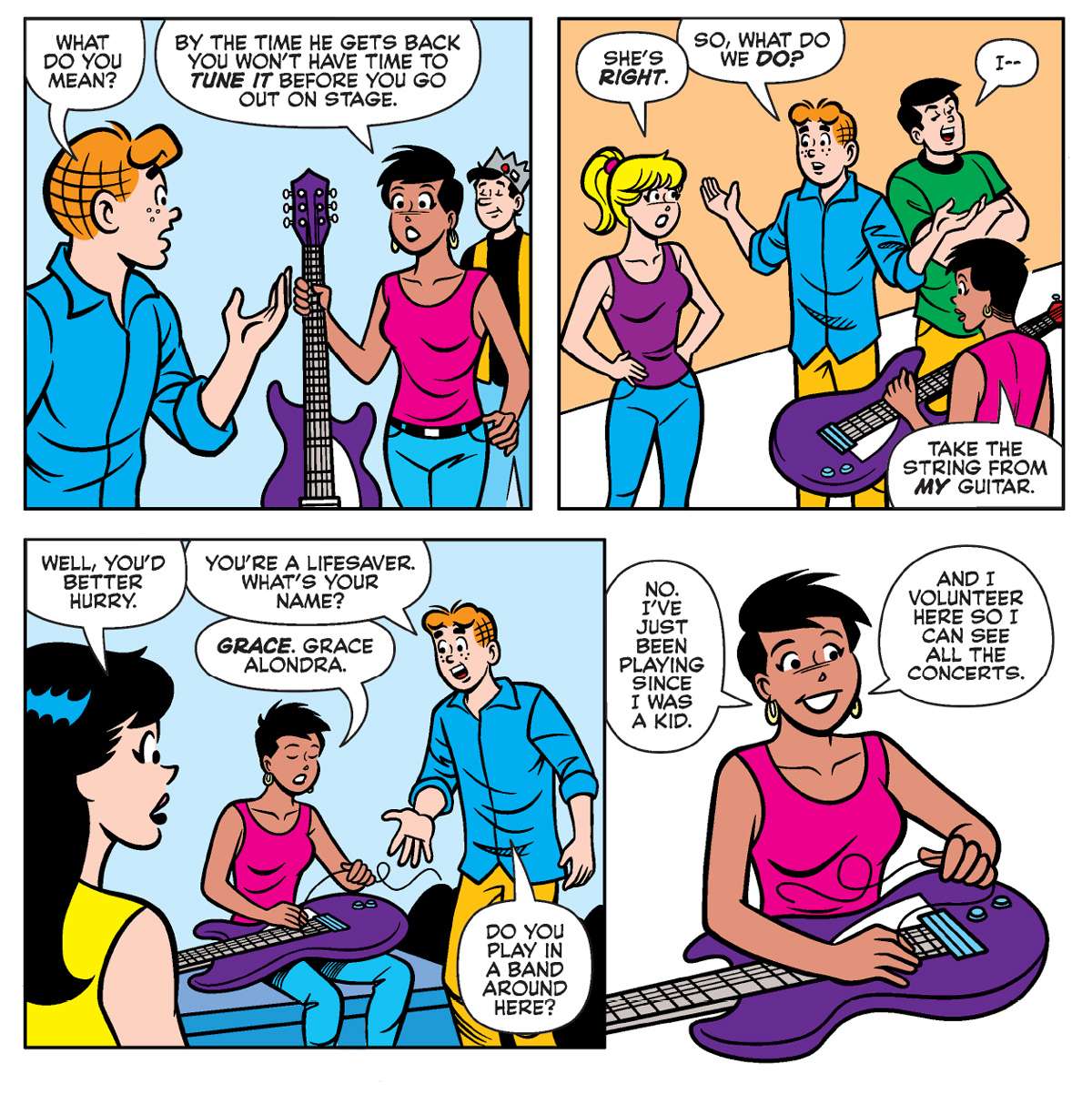 In “Sounds like Music,” Archie and the gang meet Grace, a young Latina woman who loves music — especially her favorite band, The Archies. Spunky and smart, Grace isn’t letting her journey toward hearing loss define her. Instead, she is eager to hear all the great music she can, while she can.

Grace’s journey is all too familiar to individuals with this diagnosis, which is most often discovered in the teen to young adult years. “As a long-time music fan, I first learned that I would lose my hearing in college, so I set out to listen to all the music I could so I could keep it deep in my memory,” said Matt Hay, who lives with NF2. “I was creating a soundtrack for a life I had not yet lived.” Matt was diagnosed in his early college years and eventually lost all hearing due to NF2.

The inclusion of Grace continues Archie’s commitment to introducing diverse and differently-abled characters in its various ongoing comics series. Archie Comics Editor-in-Chief Mike Pellerito is enthusiastic about bringing this character into the classic Archie Universe. “Grace is a talented and whip-smart teenager,” he said. “The fact that she’s experiencing hearing loss is only one part of her story. To me, this is the stuff that really matters, and we’re proud to be working with the Children’s Tumor Foundation on an important story like this.” 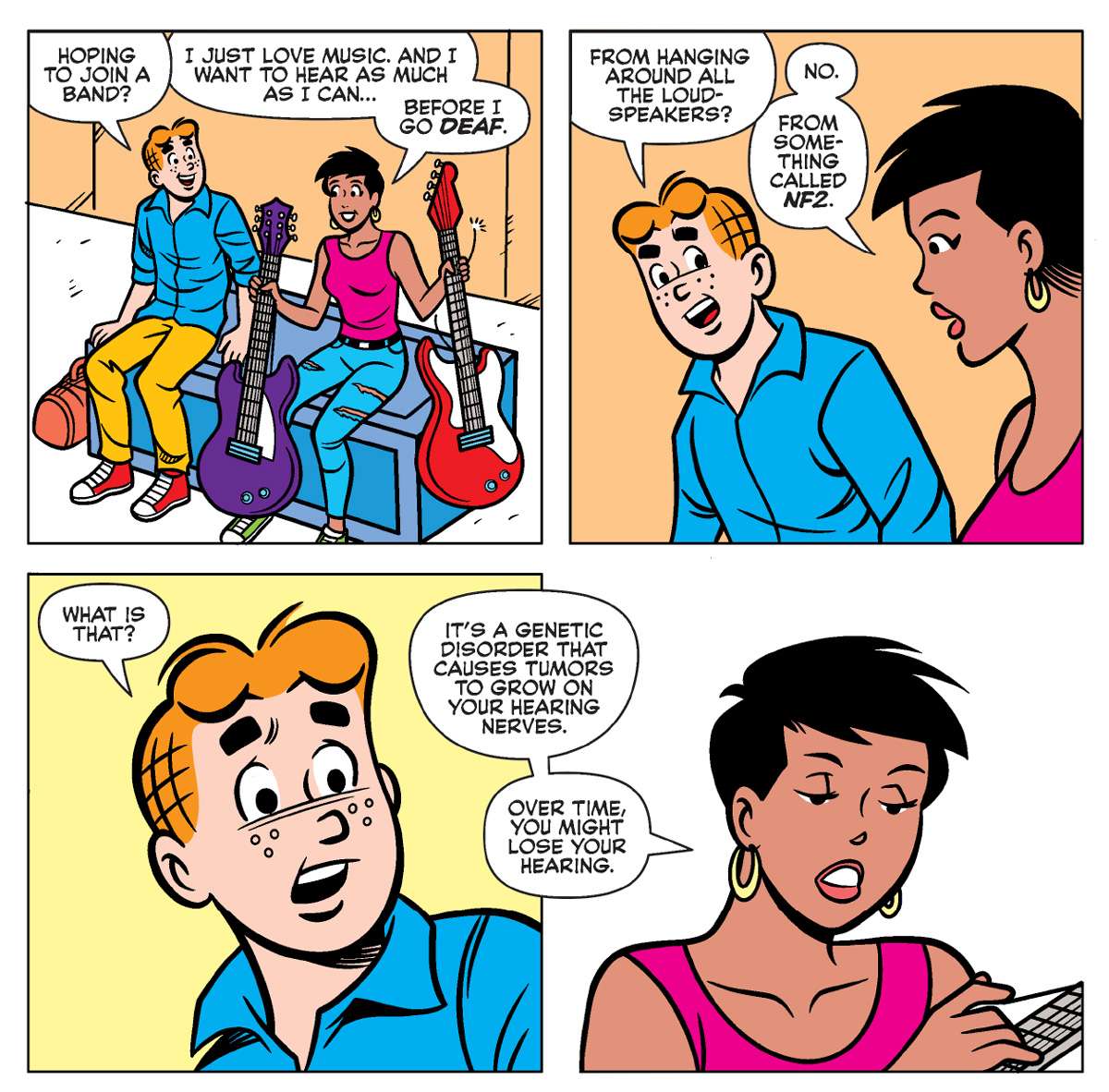 “Sounds like Music” was written by veteran comic book writer Alex Simmons whose Archie Comics work has been hailed as both entertaining and educational. Art is by Bill Galvan, Ben Galvan, Glenn Whitmore, and Jack Morelli.

“We’re incredibly grateful for the support of Archie Comics in our mission to increase knowledge of NF to new audiences, particularly readers of comic books,” said Simon Vukelj, Chief Marketing Officer of the Children’s Tumor Foundation. “In addition to the health challenges NF patients face in their day-to-day lives, they also find that many people simply have never heard of NF. This partnership with Archie will go a long way to changing that, and will help give voice to all NF patients.”

The Children’s Tumor Foundation has developed and released three previous comics stories independently, with three more currently in progress. “Comics are an ideal medium to create awareness, education, and representation for people facing all kinds of challenges, including neurofibromatosis and other rare disorders,” said Vanessa Younger, Communications Director at the Children’s Tumor Foundation, who oversees the Foundation’s comics program. “The inclusion of a character living with NF2 in this Archie story is the next step in this initiative, and we are actively working on more.”

CTF’s current “NF Comics” titles include “Understanding NF2,” “Moxie and Sparx Explain NF1,” and “Moxie and Sparx Introduce the Accelerator”; the Foundation’s comic books, including Archie’s “Sounds Like Music,” are available to freely download or read on the CTF website at ctf.org/comics.