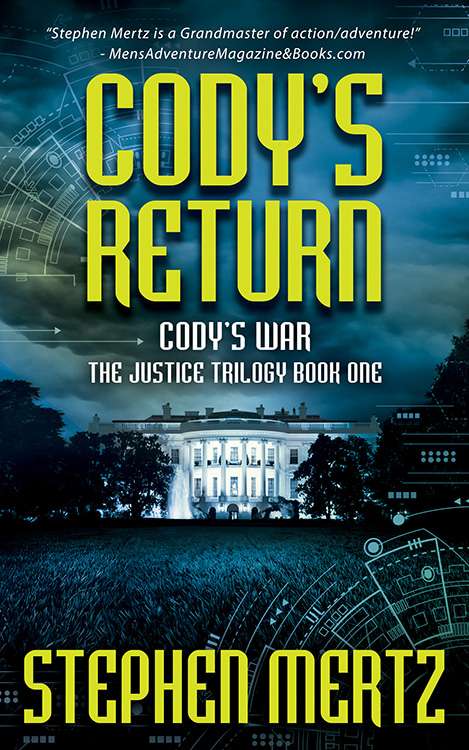 Who would feature a “crazy feminist” as a villain in today’s woke world? Author Stephen Mertz would in Cody’s War, book one of his new action-adventure trilogy.

On May 15, MensPulpMags.com did a Q&A with Mertz and talked about Cody’s Return and The Justice Trilogy. And Mertz summarized what the novel and series are about.

When I created the first book in the trilogy, CODY’S RETURN, I decided to lighten the series up with a sort of pure action vibe like back in my Mack Bolan days. I’ve been a fan of super villains since I grew up reading about super bad guys like Dr. No and Fu Manchu. But I wanted a super villain that hadn’t been done before. I came up with Thelma Justice, a global media megastar who happens to be a crazy feminist who wants to blow up the world so she can rule what’s left. I teamed her up with a rogue Russian general who deals in black market nukes and is about to make her dream come true. They’re a match made in Hell! I’m happy with the result.

That is one unique villain for today’s world. Actually, it’s unique just to have a villainess as the villain. (Of course, he did team her up with “a rogue Russian general,” so who knows if he was consciously trying to go against the grain.)

And although Cody’s Return came out this March, readers don’t have to wait for the release of books two and three to find out what happens and how it all ends. Lethal Assault and Final Strike are already here.

If you want even more thrilling adventures featuring hero Jack Cody after that, Mertz has a separate series going called Cody’s War. Afghanistan Payback is book nine and was just published on May 22.

America’s disorganized military evacuation from the Hell on Earth called Afghanistan left ace CIA field agent Jack Cody with a bitter, dissatisfied fire in his gut. Maybe it was strategically viable, but too much good was being left undone in a country that had fallen into wholesale slaughter and savagery following America’s withdrawal.

Now, the Taliban is in power, and no one is safe.

But when the US government learns that a handful of American military personnel may have been left behind and are being held prisoner by a cruel Taliban warlord somewhere in that godforsaken country, nothing can stop the man they call Suicide Cody from launching a one-man dark-op mission to locate their people and bring them home . . . or die trying!

So if you’re looking for a good action-adventure series with an un-woke villain, you might want to give Cody’s Return and the rest of The Justice Trilogy a try.

Chris Pratt Set for Revenge in ‘The Terminal List’ on Prime Video
Will ‘Don’t Worry Darling’ Strike Another Blow Against the Patriarchy?
Wow, Just Wow: Netflix’s ‘Interceptor’ Looks Laughably Bad
Roku’s ‘Weird: The Al Yankovic Story’ Indeed Looks... Weird
From Sci-Fi to the Battlefield: How Autonomous Drones Are Becoming a Reality
Gabe Eltaeb Finds Comics Success after Leaving DC on His Own Terms
New Site Will be a One-Stop-Shop for 'Un-Woke' Fiction