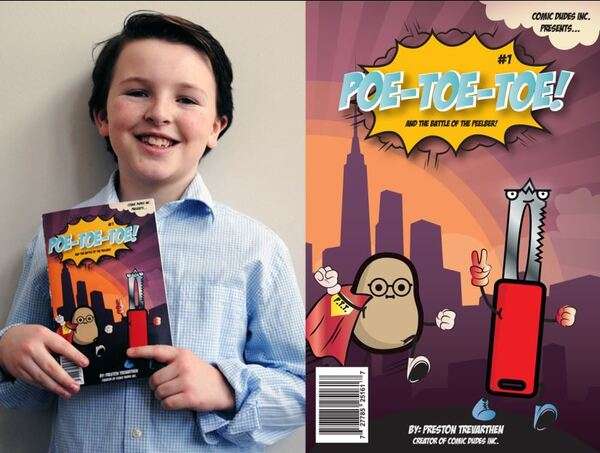 In honor of Dr. Seuss’ birthday, March is designated as National Reading Month – a month that aims to motivate people of all ages to read every day.

9-year-old Preston Trevarthen attends Charyl Stockwell Academy. He recently wrote and designed a comic book about a potato that becomes a superhero titled “POE-TOE-TOE And The Battle Of The Peelber”.

The description online reads: “POE-TOE-TOE – He was just a regular old spud until one day bird droppings made him a hero. Make Sense? Ya, We’re still not sure either. But we are sure that you’re gonna love this little fry. Join POE-TOE-TOE on his adventure as he takes on Peelber with the help of his Tato Army”.

Preston told WHMI he came up with the idea for a funny, entertaining story, which he plans to be the first of a continuing series. He said he likes writing comics and decided to re-arrange the letters of the word potato and came up with “poe-toe-toe”. Once he started writing different versions, Preston said it got a lot easier because he had a better picture of the story and what he wanted it to be about.

Preston loves reading and ultimately aspires to become a young author in comics. When he got the first proof of his comic book, he said “joy just flooded all over him and he felt so happy that it was actually printed on paper”.

Physical copies are in the process of being printed but the comic can currently be downloaded on Kindle from Amazon.