All-New Wolverine is back and with a new costume!

Laura Kinney aka the All-New Wolverine has been featured in the cast of Dawn of X spinoff Fallen Angels carrying on the X-23 moniker. However, in preview images for the upcoming X-Men #5, Kinney is back and is seemingly assuming the role of Wolverine once again.’

Laura Kinney first debuted in NYX #3 as a clone of Wolverine who’s designed to be a killing machine for an organization called the Facility. She took on the name X-23 and had the same powers as Wolverine, including a healing factor, retractable adamantium claws, and superhuman reflexes and strength. In Tom Taylor and David Lopez’s All-New Wolverine, Laura assumes the mantle of Wolverine from Logan. Since that arc concluded, Kinney has been in the role of both X-23 and Wolverine, but in the X-Men spinoff Fallen Angels, she’s reassumed the role of X-23. 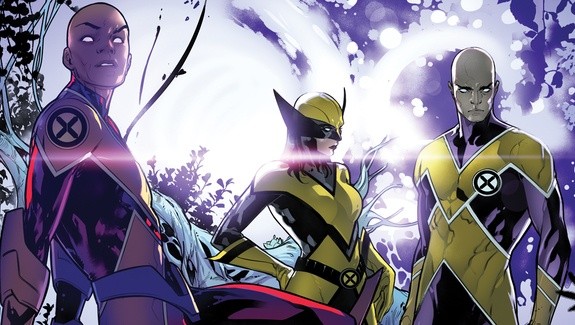 In a preview image for X-Men #5 by Jonathan Hickman and R.B. Silva, Kinney can be seen in a new Wolverine costume on Krakoa alongside fellow mutants Synch and Darwin. And by the look of things, the trio’s costumes suggest they are some kind of team.

Is Kinney is back in a Wolverine costume for good?

X-Men #5 will be released at comic shops on January, 29th.