Why We’re Skeptical of That Lucas/Disney ‘Royalties Rumor’

This rumor comes to us from Midnight’s Edge, Doomcock and Nerdrotics, all very fine individuals.

Geeks + Gamers also commented on this rumor, after Bounding Into Comics reported on it.

The rumor basically states that as part of the deal Disney made with Lucas when they bought Star Wars, Disney still has to pay Lucas a certain amount of royalties.  Because of this, Disney is veering away from material in the OT and the PT, and remaking things in an effort to avoid paying Lucas anything.  Supposedly this rumor comes from anonymous insiders.  The recent insight into the redesign of alien species might seem to support that rumor.

But I’m skeptical of this rumor for several reasons.

First, Obi-Wan Kenobi dies in the very first Star Wars film.  Qui-Gon Jinn dies in The Phantom Menace.  A character that would have prominence in the Prequel Trilogy.  So killing off legacy characters in and of itself really isn’t a problem.  The problem was the lackluster anti-climactic way in which the characters were killed.

Second, one of the pieces of information meant to support this rumor is the changes to the Millennium Falcon’s radar dish.  But as fans know, the Falcon’s radar dish was knocked off during the attack on the Death Star 2.0.  Plus, the ship was always a work in progress under Han’s ownership.  So this doesn’t really ring any alarm bells.

Next, there was Rogue One.  A film with digital recreations of Princess Leia and Grand Moff Tarkin, both original trilogy characters.

Also, the title of Episode IX is The Rise of Skywalker.  If they needed to stay away from all things Original Trilogy, I doubt that they would have titled the next movie this way.

So there isn’t much to this rumor that makes sense to me.  But there’s something else.

When I hear rumors coming from anonymous inside sources, I immediately think back to what we already know about Jason Ward from MakingStarWars.com sending out fake spoilers to rival websites in an effort to discredit them.

A thread at the milleniumfalcon.com forums from April 2015, shows information taken from The Comlink, a sub-forum from MakingStarWars.net.  Apparently milleniumfalcom.com had some informant or mole that gave them this information, and as a result, they put together a dossier which can be read by anyone as of this writing.  The dossier details Mr. Ward’s history of engaging in doxxing activities earlier in March 2015.  In particular, the contacting of workplaces of individuals that he had online conflicts with.  The thread has been archived here, and it’s definitely worth a read.  There is more information there than I’ll be able to post here, so you’ll have to click on the thumbnails at millenniumfalcon.com to see these posts in full size and in their full context. 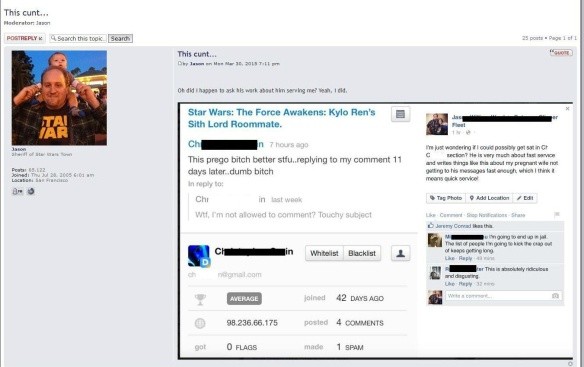 There is also discussion of efforts by Ward and his associates to pose as Lucasfilm insiders, and feed false spoilers from Star Wars productions to rival websites including Star Wars News Net, in an effort to discredit them publicly.

According to the information at millenniumfalcon.com, it appears that Jason Ward had rival competition such as Rebel Force Radio in his sights since at least 2015, and was waiting for an opportune moment to strike. For Ward, it was about “entrenchment.”

I see no reason why Jason Ward, or another entity, wouldn’t try the same tactic with YouTubers.

So from my perspective, this stinks as a concerted effort to discredit The Fandom Menace only a few months away from the opening of Episode IX: Rise of Skywalker, by feeding them false rumors.  But I could be wrong.

Star Wars Only is also skeptical of this rumor: