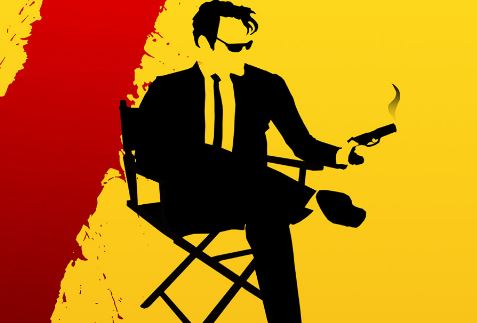 The Los Angeles Times interviewed moviemaker Quentin Tarantino, who now says he’d rather not direct a Marvel/DC adaptation. Along the way, he told them:

Asked if there were any movies that maybe he should not have seen as a kid, Tarantino recalls asking to leave the theater during “Bambi” after Bambi’s mother was shot and the forest fire began.

“I think ‘Bambi’ is well known for traumatizing children,” Tarantino says. “It’s a cliché, but it’s true. The only other movie I couldn’t handle and had to leave was at a drive-in in Tennessee. I was there alone, sitting on the gravel by a speaker, watching Wes Craven’s ‘Last House on the Left.’ So for me, ‘Last House on the Left’ and ‘Bambi’ are sitting on the f— shelf right next to each other.” He laughs. “Both take place in the woods, and both had me saying, ‘I gotta get out of here!’”

That’s pretty weird coming from somebody whom the paper lets us know earlier has a whole collection of horror thrillers in his personal library, including The Sentinel from around 1977. And somebody who came up with a torture scene in Reservoir Dogs that reportedly prompted Last House on the Left‘s late director, Craven, to walk out of a screening. Bambi may have traumatized children (I vaguely recall my own mother once admitted she found that part insufferable when she saw it in her childhood), but while Tarantino’s crime dramas may be aimed more at adults, who’s to say they aren’t traumatizing in a different way, when you take their mayhem into consideration?

The movies in “Cinema Speculation” have a fair amount of blood-splattering moments, as you’d expect from the filmmaker who created “Reservoir Dogs,” “Pulp Fiction,” “Once Upon a Time … in Hollywood,” “Kill Bill” … I could keep running through the filmography, but you get the point. But there are also — and this is equally true to his oeuvre — plenty of laugh-out-loud jokes. Tarantino calls them “snarky little asides out of the corner of my mouth,” and they usually arrive in a parenthetical, such as when he muses that, just as ’60s antiestablishment auteurs rejoiced when studio musical adaptations fell out of favor, today’s filmmakers “can’t wait for the day they can say that about superhero movies.”

“The analogy works because it’s a similar chokehold,” Tarantino says.

But when can we expect the tide to turn? “The writing’s not quite on the wall yet,” he says, “the way it was in 1969 when it was, ‘Oh, my God, we just put a bunch of money into things that nobody gives a damn about anymore.’”

And yet, so many auteurs have made superhero films. I ask him why he never has raised his hand for a Marvel or DC Comics flick, even though I know the answer. Sometimes it’s just fun to hear him say it.

“You have to be a hired hand to do those things,” Tarantino says. “I’m not a hired hand. I’m not looking for a job.”

Which is quite okay, because Disney likely wouldn’t give him creative freedom to do much of anything impressive (and creative freedom has become all but extinct in the mainstream nowadays), and simultaneously, his style is way too violent, as the interview makes clear. But The Cinema Spot argues he’s a bit hypocritical, and the info they provide does seem to suggest they’ve got a point:

As a youth, Tarantino was an avid dork. He loved Saturday morning cartoons, enjoyed action figures, and collected comic books. He shared with Amy Schumer’s “3 Girls, 1 Keith” podcast that his favorites were Luke Cage: Hero for Hire and Shang-Chi: Master of Kung-Fu. That iconoclast fascination of his led him directly to Hollywood to become one of those most prolific storytellers on screen. But he was still a dork.

He even tried making a Luke Cage movie when his star was at supernova status but was unceremoniously denied the opportunity. Why? “My comic book geek friends talked me out of it.” Wait, what?! He let someone talk him out of something? Must have been one hell of a persuasive debate.

The point is Quentin Tarantino loves nerdy things, so when he sat down recently with the Los Angeles Times to talk down on the comic book movie genre…yeah. Uh, sanctimonious much?

People get older, and opinions change, but this is elitist babbling. Like no one will hit the rewind button on the Interwebz and find a few things the avant-garde director has said on the topic. […]

Yes, it most certainly is silly of Tarantino to obscure past information. But even if he did direct a superhero flick tomorrow, I won’t be at the theater, and if I do see it, I’d rather it just be on video. The guy’s movies already made are in such questionable taste, as Reservoir Dogs makes clear, and as a result, who knows what kind of vision he’d apply to a superhero adaptation, if he were allowed specific range? And recalling much of Hollywood’s got its own problems with hypocrisy, what if they didn’t allow Tarantino to script sex scenes, but did allow longer range with jarring violence? I’d rather not think about what the finished product would be like.

There were two remakes of Richard Roundtree’s Shaft that fell victim to this PC direction, and the Marvel/DC adaptations have already proven vulnerable in similar ways too. A comic film directed by Tarantino is not what we need either.