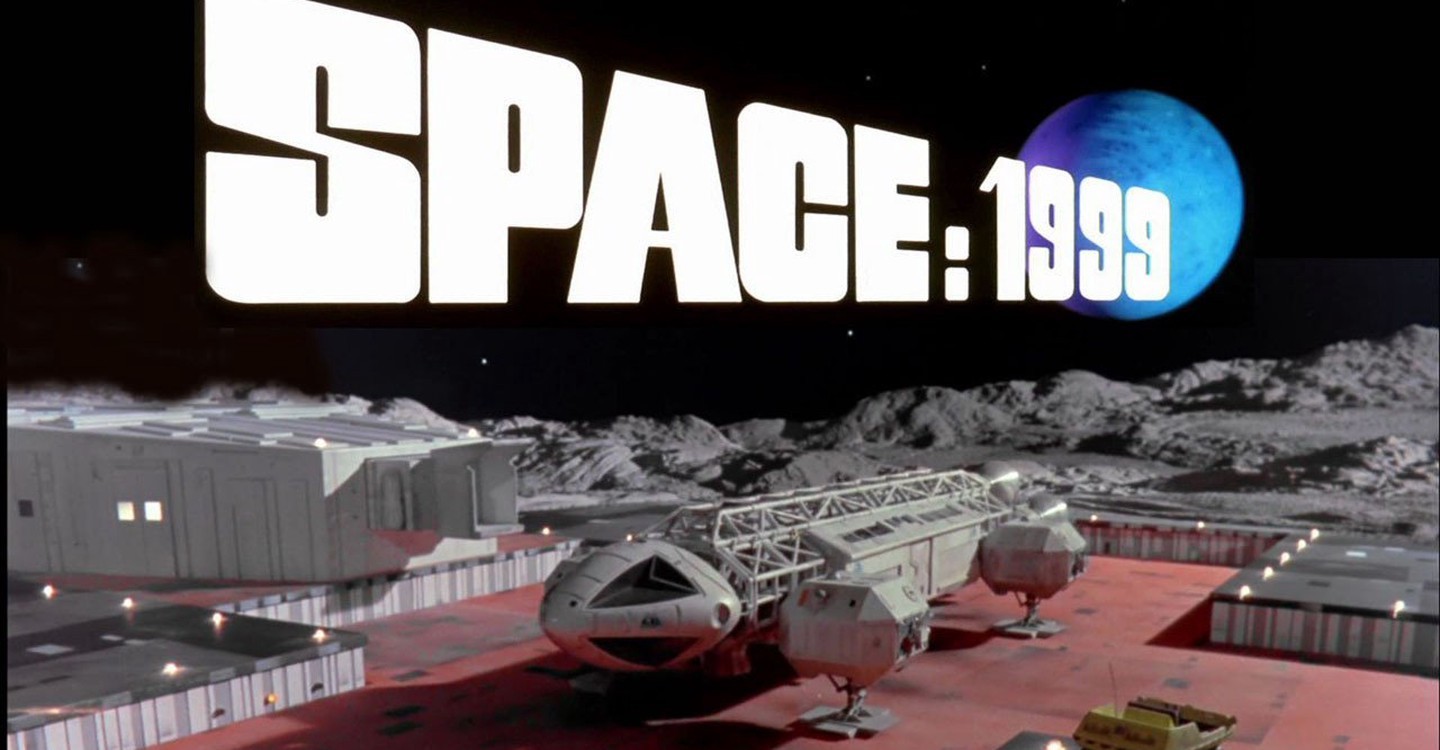 The anniversary of the moon landing reminded me of an almost completely forgotten show that once hit the airwaves just as the Apollo missions drew to a close.

Wait, the Moon is the Spaceship?

As the name implies, Space: 1999 wasn’t set in some distant future with fabulous technology like Star Trek.  Instead, it was what one might call “the near now,” so its tech and gadgets are much less advanced.  There was a clear effort to keep the show within plausible limits, but I’d have to say they all failed due to the premise of the show, which combined 70s environmental concerns with popular post-Watergate mistrust of government institutions.  Hmmm, maybe it isn’t so dated after all…

Anyhow, our show begins in September, 1999, and Moonbase Alpha’s job is to take in tons of nuclear waste from the Earth below.  And let’s be clear – there’s a lot of waste.  So much so, that it’s getting packed ever more tightly.

Despite the warnings of archetypal British science nerd Dr. Victor Bergman (Barry Morse), the whole stack of fuel goes critical, in effect creating a massive rocket engine that propels the moon, as well as the 311 inhabitants of Moonbase Alpha, far away from our solar system and into strange new worlds and new civilizations (to borrow a phrase).

The show makes a few vague attempts to explain how this could actually work with real-world physics, but basically it’s given a handwave because while documenting the new culture that might emerge in the isolation of the moonbase could be a fascinating show, that’s not what creators Gerry and Sylvia Anderson wanted to do.  They wanted a successor to Star Trek’s audience and for once, weren’t willing to use marionettes to get it. Incidentally, Space: 1999 was the last production by the partnership of Gerry and Sylvia Anderson and was the most expensive series produced for British television up to that time. 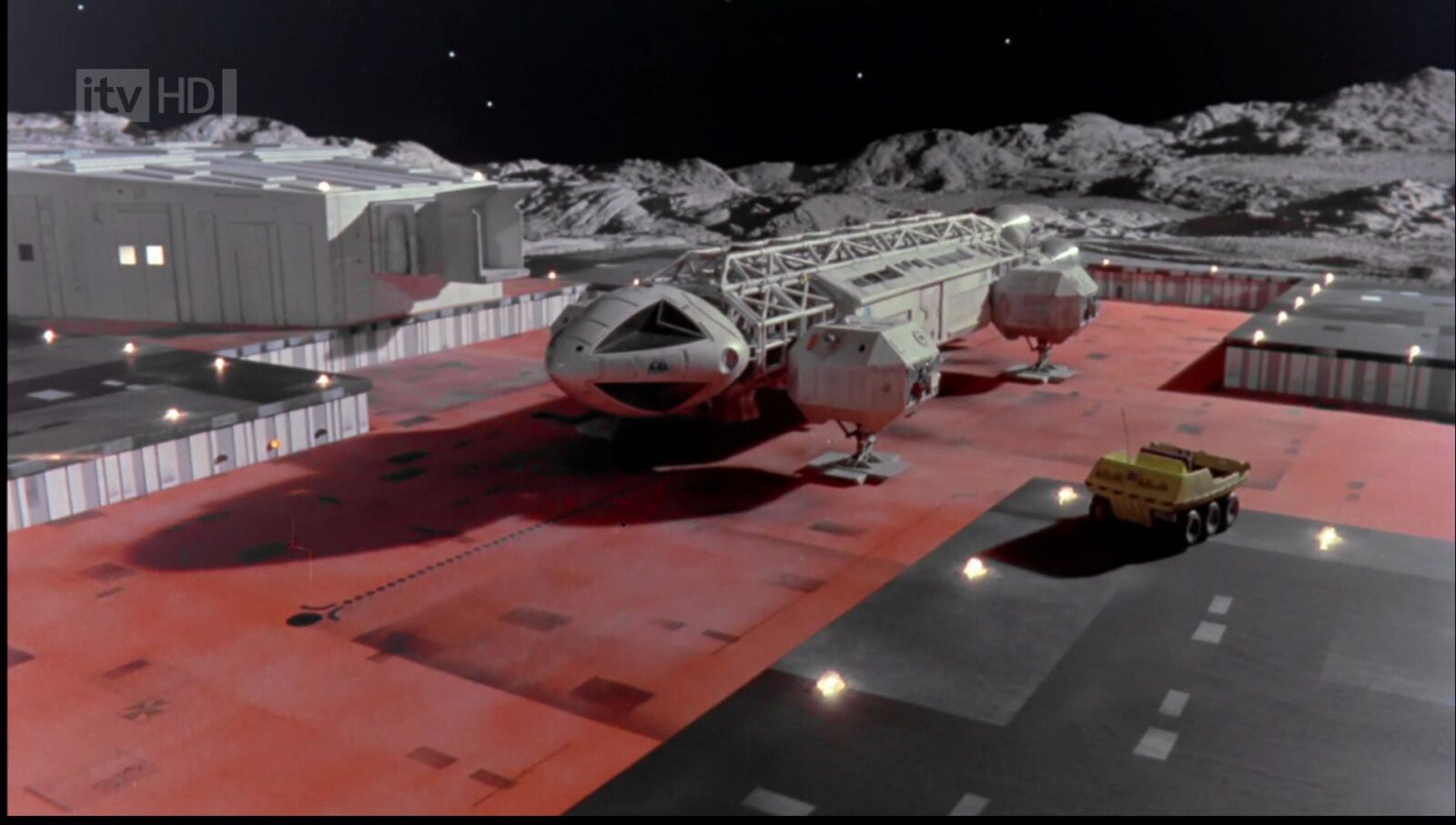 Presenting the Eagle – the “Red Shirt” of Spaceships

Hurtling through the void on a renegade moon puts one in a pretty passive state, but happily Moonbase Alpha was amply provided with short-range spacecraft known as “Eagles.”   Eaglers are modular, short-range craft, so you can have cargo haulers, passenger versions, and of course warships depending on what you need.

It is the Eagles that go out and make contact with whatever British actor is filling the guest star slot for the week.  Some of these are quite amusing, as you can see Christopher Lee, Peter Cushing, Brian Blessed and even Joan Collins slumming around on the set.  David Prowse does a turn as the Cloud Monster in Season 2 that demonstrates his mastery of being a tall guy in a suit.  Darth Vader was definitely a step up.

As the front-line defense for the Alphans, the Eagles serve the same basic purpose as the “security team” did on Star Trek – getting beaten up or destroyed to demonstrate how tough the adversary of the week is.

Of course, losing a couple of guards to the salt-sucking monster is a lot different than having multiple scout craft blown up, especially when it keeps happening again and again.  Season One gets around this by letting the viewers know that even though the Earth is far behind, there are plenty of spare parts and equipment to build new Eagles as the losses mount.

Still, with their cage-like supporting structure and utilitarian hull, the Eagles are one of the coolest sci-fi ships ever designed.  As a kid, I always looked forward to watching some of them fly around and (usually) blow up.

Two, Two Shows in One!

It’s not uncommon for TV shows to make major changes during the course of their run.  Since I mentioned Joan Collins earlier, it’s worth noting that her late addition to the cast of Dynasty at the end of the first season turned a middling prime-time soap opera into a ratings juggernaut. 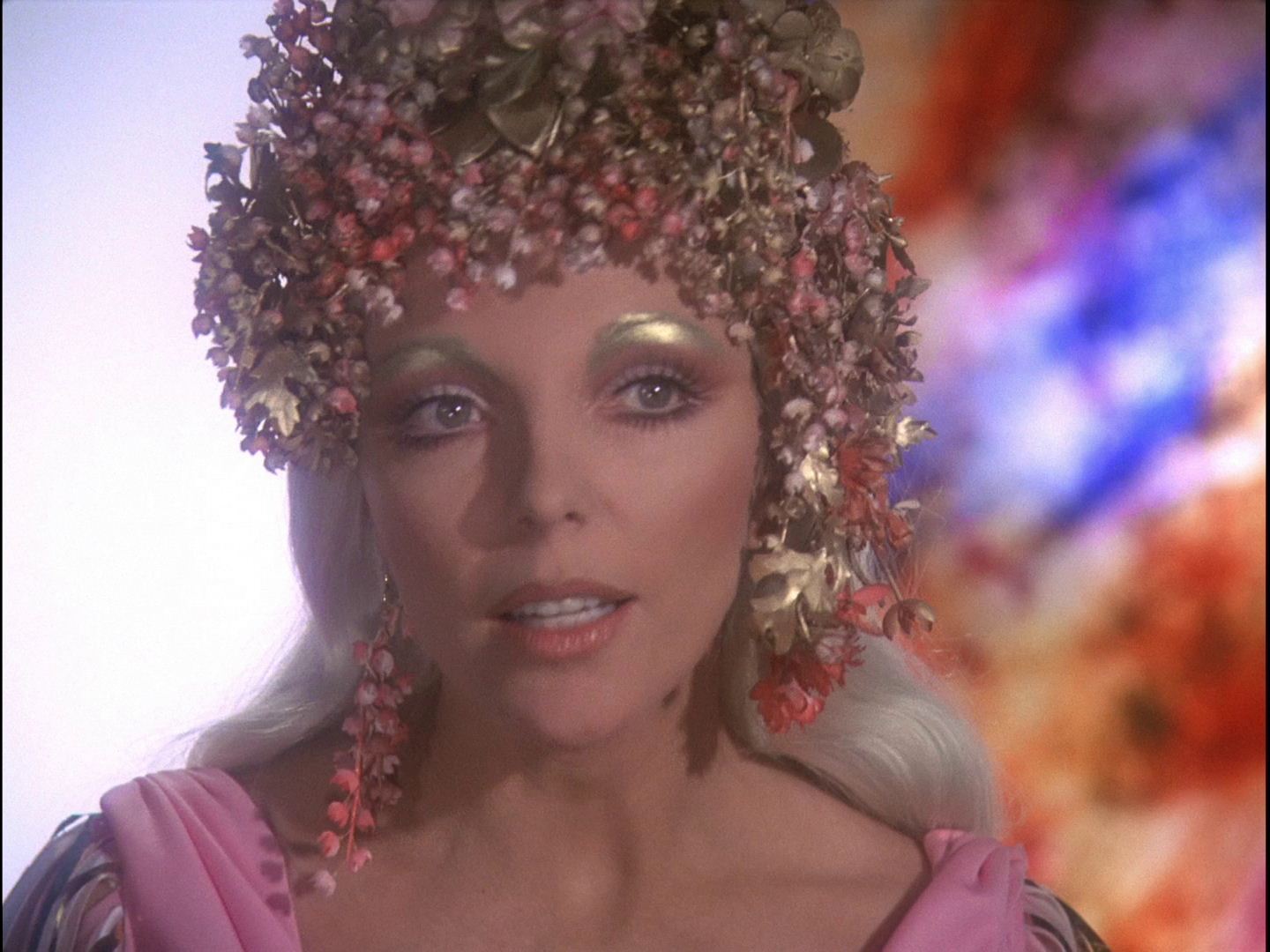 Space: 1999’s first season did not do well.  The sets were dull in the extreme – antiseptic white, with all the charm of a modern art museum lobby.  The casting choices were also peculiar.

While Martin Landau is a very good actor, his Commander John Koenig is almost devoid of anything approaching charisma.  His signature move, such as it is, is to frown.  A lot.

Landau’s wife at the time, Barbara Bain, played the medical officer, Dr. Helena Russell.  She appears heavily sedated.  Combined with Dr. Victor Bergman, the trio offered little for the viewer to relate to, or really care about.

The second season therefore got an extreme makeover, starting with the title credits.  Gone was the majestic Kubrickian theme and in its place was insistent bombast with striking visuals.

The moonbase got new, more interactive (and less expensive) sets and a splash of color.  The cast no longer seemed under the influence of Quaaludes, allowing the use of emotion and the emergence of interpersonal relationships.  Koenig and Russell went from distant professionalism to passionate lovers.  Morse left the show and the science officer part was assumed by Catherine Schell’s alien shape-shifter Maya to add an element of sex appeal. 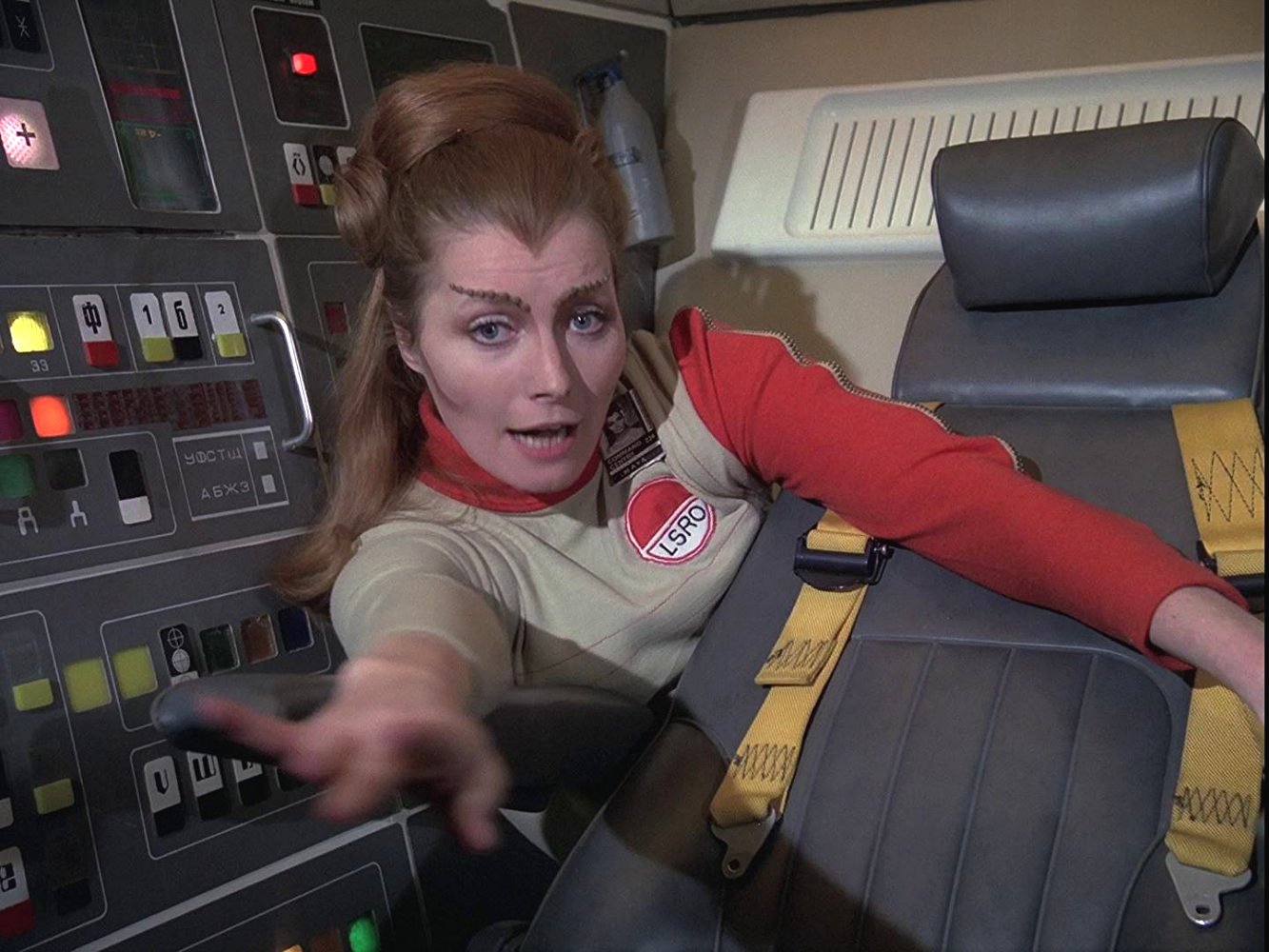 Instead of cool and cerebral discussions, things were now action-oriented, and if the show had a stronger Star Trek vibe, that’s because third-season Star Trek producer Fred Freiburger was now the producer and script editor.

Freiburger has been unfairly blamed for burying shows, but Space: 1999 was clearly already a lost cause when he got involved.  It was only a matter of time.

Despite being picked up by the Canadian Broadcast Company, the show never really found an audience and was cancelled. 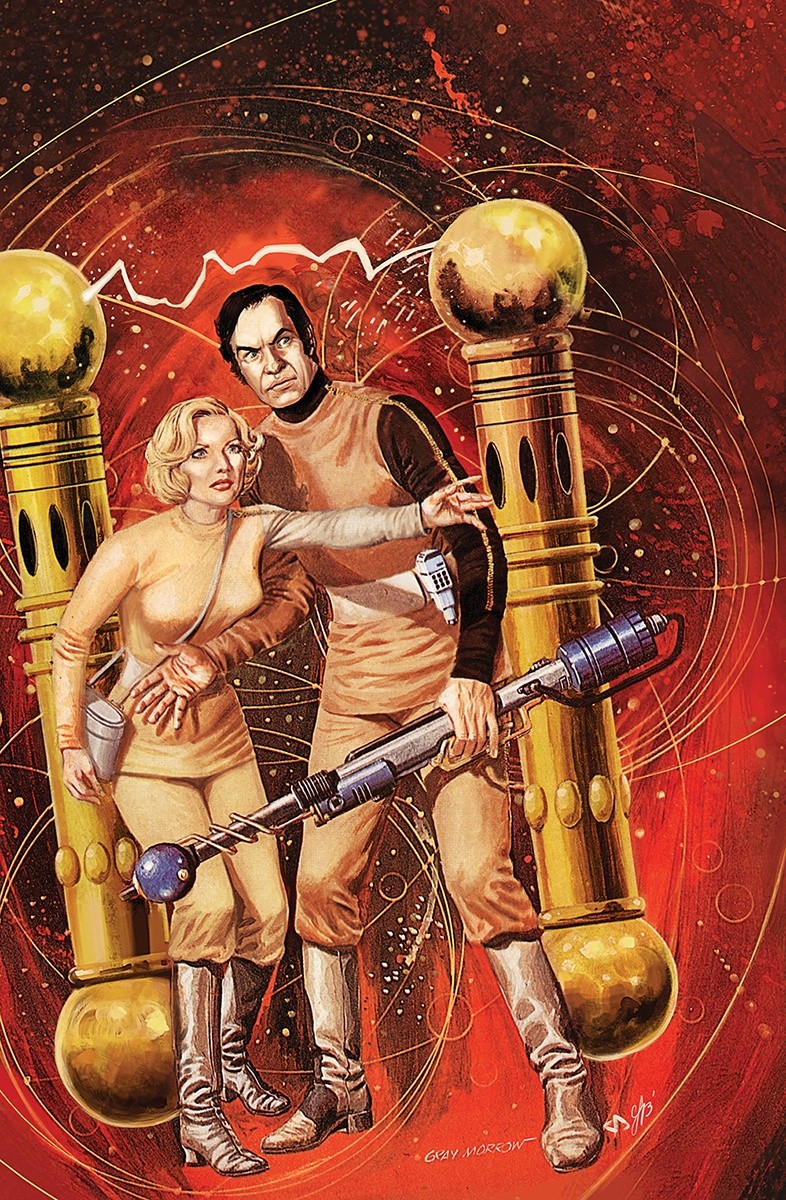 The Stinky Cheese of Space Opera

Despite its flaws, Space: 1999 has its pleasures and can be quite enjoyable in small doses.  I tried to binge-watch it a couple of years ago and it’s tough sledding.

In a sense, it’s like one of those artisan cheeses – worth a few nibbles, but not something you want to make into a meal.

It’s one of those 70s artefacts that you have to see to get the groove, and awfulness is part of the charm.  It’s similar to its close contemporary Phantom of the Paradise, except that the latter shifts its tone around the midway point to become a legitimately interesting film (and which also has excellent music). 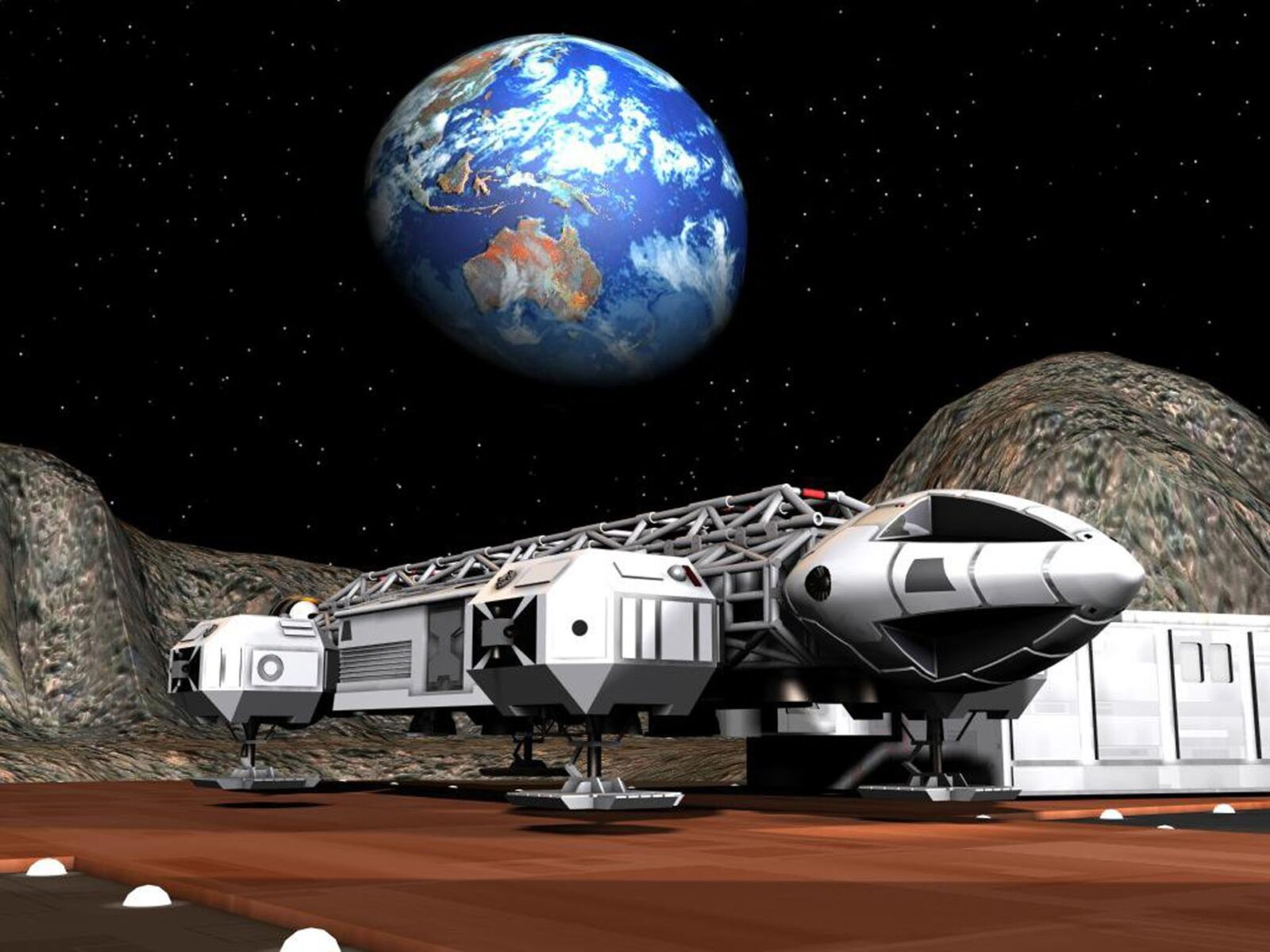 There’s a fan film called Message From Moonbase Alpha made with the co-operation and involvement of Space: 1999 script editor  Johnny Byrne, who penned the script. Filmed inside a private house on a working replica of a small section of the Main Mission set and utilizing the original prop of Koenig’s Command Center desk and Sandra Benes’s original Year Two Alpha uniform, the short film was first shown at the Space: 1999 Breakaway Convention in Los Angeles on September 13, 1999—the day the events in episode 1 of the series were supposed to take place. With the permission of (then) copyright owners Carlton Media International, the film included brief clips from seven episodes to illustrate the deserted Moonbase Alpha and the Alphans’ exodus to planet Terra Alpha.

Previously unused footage shot for the Year Two title sequence and The Last Enemy was used to create a sequence showing the Moon being affected by a gravitational disturbance and thrown into an unknown solar system. Short excerpts from 12 other episodes appeared in a montage as Sandra Benes recalls her life on Alpha. The seven-minute film features Zienia Merton reprising her role as Sandra Benes delivering a final message to Earth as the only crew member left on Moonbase Alpha while a massive exodus to a habitable planet, Terra Alpha, takes place with the rest of the crew.

Around the same time ‘Message From Moonbase Alpha’ was being filmed, Johnny Byrne and Christopher Penfold attempted to revive the franchise as a movie series, similar to the way Star Trek had been revived cinematically in the late 1970s. The first film would have picked up the story several years after the series ended, and would have featured a heavily redesigned Moonbase Alpha. Ultimately the project failed, and nothing came of it. There have been rumors of a reboot since 2012, but even an ironic one would be a tough sell.  As noted above, the premise stinks and the “brand” has zero resonance.  Doing an Austin Powers send-up would likewise be pointless because the original is pretty much a laugh riot with the right people watching it.

Still, it provides a perfect distillation of the state of sci-fi at its time, and after watching it, you can understand why Star Wars was such a big deal when it was released a year after the show was cancelled.

Watch a full episode and decide for yourself!