Make what you will of Bill Willingham from Fables fame, but with the announcement he’s working on a Batman/Bigby Wolf crossover, Heidi MacDonald of Comics Beat (who may not have spoken about him for 5 years until now) has done a hit piece on Willingham, attacking him for the cheapest of reasons, in what’s obviously a subtle form of cancel culture mentality:

It was one of the most beloved comics series of the Aughts, with a 150 issue run, a highly regarded video game, multiple awards and even its own convention. And just in time for its 20th anniversary, Fables is coming back….to a very different world where its author’s politics (and the book’s not so subtle expression of it) are being heavily scrutinized.

[…] But now, creator Willingham’s politics – which he often injected not so subtly into the book – are now being scrutinized, along with his some of his more questionable actions along the way. Willingham has never been shy about his conservative politics, although in the naïve bipartisan paradise of 2002, liberals and conservatives working on a comic together wasn’t as much of a political statement as it is now. In particular, a pro Israel storyline and an anti-abortion statement from Snow White were among the more obvious expressions in the pages of Fables. In 2009 Willingham wrote an essay for the conservative site Breitbart complaining about “superhero decadence” which could be a blueprint for some of the more strident comics culture wars that followed – and stirred up a storm of controversy at the time.

In addition to MacDonald’s hints at her hostility to the homeland of Stan Lee’s ancestors, she’s also implying it’s inappropriate for liberals to cooperate on a project with conservatives. Why, if she thinks it’s a political statement today, it’s a forgone conclusion she believes it should’ve been considered such 2 decades prior as well, and so did others. I’m actually surprised a publisher that’s had its share of stories that could be considered anti-Israel since the end of the 80s (such as Gerard Jones’ early propaganda) would be willing to host Willingham’s creations under their now defunct Vertigo imprint, but I suspect it’s simply because it was an otherwise creator-owned product, not connected to the DCU proper, and the chances they’d do it today are regrettably far less.

And while Willingham did make mistakes that could be considered objectionable in the past, MacDonald’s citation of a 2015 convention panel doesn’t seem altruistic (the Mary Sue article she’s linked to actually sounds expectedly exaggerated). Mainly because nobody’s taken him to task for his repellent mistreatment of Chuck Dixon’s creation, Stephanie Brown/Spoiler, in the Batbooks Willingham was writing at the time (and why specifically does Batman matter to him, rather than Superman? Again, I think somebody missed a huge opportunity). Which just shows they never cared for such creations in the first place.

MacDonald continues to babble the following:

Willingham’s Wikipedia page quotes him as being “rabidly pro Israel,” a quote from an interview that seems to be lost to time. However he was open about it in a 2007 interview with the AV Club:

I may have read in the comments section of a video about this shoddy hit piece that the interview she speaks of came from The Comics Journal in 2016, but this still does not speak well of her MO if she really can’t cite an actual source as a “professional” (besides, Wikipedia’s a site anybody can edit on considerable sums of pages). Now, since we’re on the subject, we may as well take a look at the interview itself:

AVC: You’ve come under fire for the series’ politics at times, like that Snow White line, or having Bigby Wolf lay out the parallels between Fabletown and Israel. Does it surprise you when people get upset about these things? Do you see them as controversial when you’re writing them?

BW: The wedding-vow thing, I didn’t think was going to be controversial. That did surprise me, simply because my point was that these are immortal, traditional people, and they’ve been alive for thousands of years, and we’ve shown already that they tend as a community to cling to old ways. So I assumed every reader was going to see that and say, “Well, that’s not the way we would do weddings today, but these are folksy, old people. So, okay, I guess that’s what they’re doing.” Having readers actually upset about that did come as a surprise. 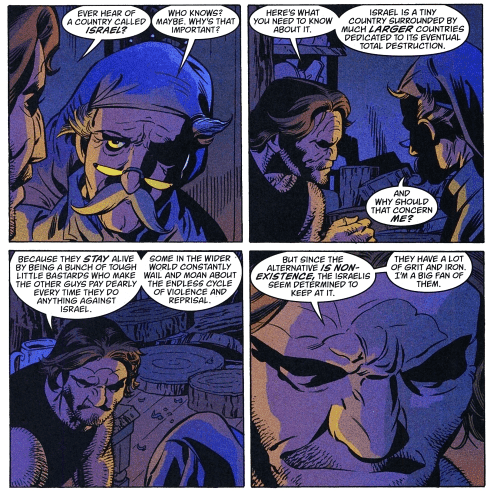 The Israel analogy, probably at the time I was writing that, I thought it would be controversial, because just the mention of Israel in any context is a hot-button issue. But once again, I thought even the people upset that that analogy was used understood the analogy. Bigby made his point of the little guy with vast forces arrayed against him. Some wackos online who don’t sign their name to what they write have said that I’m a mouthpiece for Israeli propaganda, and things like that. A paid mouthpiece, which would be wonderful. I haven’t gotten any pay yet, but if any of my Israeli commanders are listening, the checks arriving would be a nice thing. So, yeah, the controversy on that didn’t surprise me, the Israel thing. A little more heated than I expected, but then most things are.

AVC: You’ve said in the past interviews that you’re unequivocally pro-Israel. Do you think of Fables as communicating a political message, or as being persuasive in any way?

BW: No, I actually thought that that would be the best example in politics today to use as an example. Maybe my fondness for Israel helped in deciding that that was a good example to use, but no, Fables is not didactic in any way. At least, not intentionally. I don’t expect people to read that issue, bop themselves in the head, and say, “Oh my God, I’ve been so stupid about my politics in Middle Eastern affairs. I’m going to change my tune right now, because, Bigby would want me to.” I don’t expect anything like that, and I wouldn’t put that line in almost any other character’s mouth, just because I couldn’t imagine other characters thinking along those lines. Whereas Bigby was a guy who we’ve already established that historically, he went to war several times, and was involved in World War I and II. He would be the type of character who would think along those lines.

Nothing wrong with this viewpoint. Definitely not after all the damage Islamofascists in Lod caused this past month. But neither MacDonald nor some Twitter creeps she speaks of think the same:

So rather than a joyous, open-armed reunion, comics twitter came out with a strong “read the room, DC!” reaction, and the general realization that what could be overlooked in 2007 is not acceptable now.

In some ways it’s like a comics version of Buffy the Vampire Slayer – something once lauded as progressive that must be reassessed in light of revelations about the people behind the stories.

How exactly does a man making pro-Israeli statements compare to a man who’d committed adultery? Actually, even adultery’s not the worst thing that can happen. No, it’s when somebody like Harvey Weinstein or Charles Brownstein commits sexual violence that something serious occurs, and certain phony “journalists” refuse acknowledge it’s a serious issue. In any case, this woman has once again demonstrated where her loyalties lie, with tyrants. The reason Willingham’s viewpoint is now unacceptable is because she doesn’t want it to be, and surely never did. At the end, she says:

But the ongoing discourse about this book and Willingham’s politics is likely to be anything but pretty.

And that’s because she’s obviously got no problem with any of the vitriol that we all knew was bound to ensue. All by people who couldn’t give a damn about the harm Hamas did to Arabic residents of the region. To think, that MacDonald would actually want to associate herself with a medium whose founders were Israeli descendants! It’s just plain repellent.

I’ve said this before, and will again, that MacDonald should be making a grand exit from comicdom and never come back. So, when is she going to pack her bags already? Nothing of this sort she says or allegedly reports should be taken at face value. And no comics creators who consider themselves realists should associate with her either. After all the damage she’s done as a Whisper Network ally, she has really scraped bottom here.

I hate to tell Heidi this, but fake quotes and personal opinion threaded into the story with a side of character assassination is not journalism. Is this her revenge for news leaking out that she shielded her buddy Stephanie Cooke after Willingham filed charges of embezzlement against MacDonald’s friend?  Comics MATTER w/Ya Boi Zack‘s Richard Meyer takes this line of questioning even further: