When PC Goes Too Far: Marvel Tampers With Artist’s Artwork 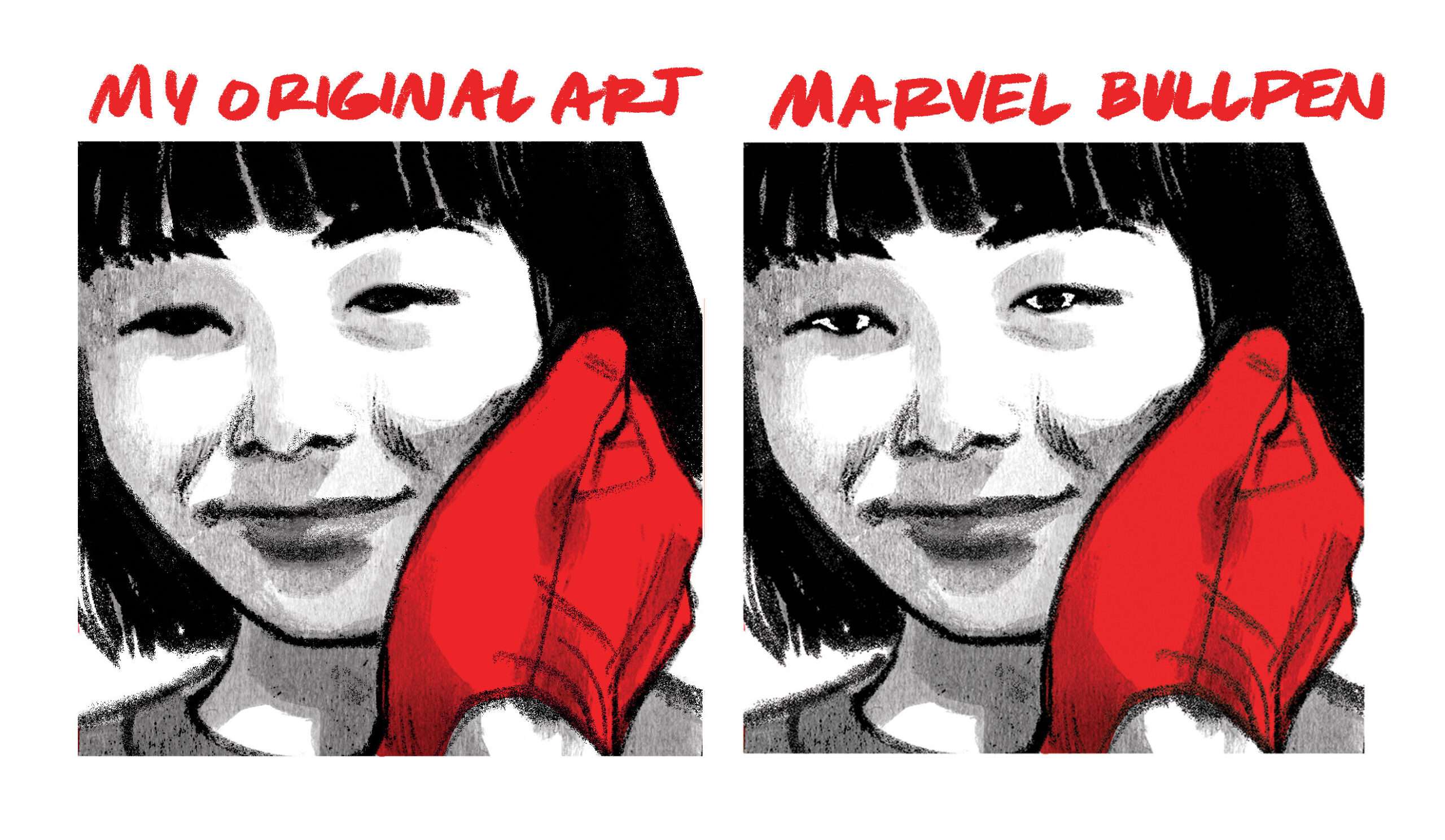 Artist Smallwood, who once complained about previous cases of censorship several years back, also contribution art to a Marvel book about Elektra: Black White & Blood, and it seems they’re so nervous about slighting POC via imagery, their idea of adhering to “cultural sensitivity” was to make a ridiculous fuss over how he drew an Asian girl’s eyes, all without his permission, and despite how some Asians who’d spoken to him weren’t offended at all.

Sad to say that, without my approval, Marvel attempted to “fix” several panels of my art in issue two of Elektra: Black, White, & Blood before sending it to the printers. They’re not huge changes but I really don’t like my art being tampered with. pic.twitter.com/08ZnBLqBPa

Long story short – 2 months after turning in the finished pages, I was informed by my editor that Marvel’s Standards & Practices flagged my art and requested I redraw several panels so that they would be “within tolerance for best representation of Asian characters.” pic.twitter.com/QZOgNSddM0

Wife and I were expecting our second child the following week and I was racing to finish an issue of HT before the birth so I told Marvel that I didn’t have time to make the changes but that I would be perfectly fine with them pulling the story for sensitivity concerns. pic.twitter.com/f6SjoEtyYz

I was told that pulling the story was not an option and if I couldn’t do revisions, the Marvel Bullpen would “take a crack” at my pages instead.

I stated very clearly that I didn’t want anyone touching my art so I dropped everything I was doing and immediately reworked all of the panels that were flagged.

Unfortunately, I just found out yesterday that the folks at Marvel didn’t even bother using my new art and instead went to print with their own revised pages. I was not given a chance to make further revisions or even approve the alterations made by the bullpen.

No doubt, this has something to do with C.B. Cebulski’s liberal guilt over using an Asian pen name in the mid-2000s, and now, he’s just so terrified of offending Asians, he ends up offending in spite of that. Such cowardice won’t bolster his collapsed image one bit. And the troubling censorship didn’t stop there:

They also attempted to cover up some nudity which just resulted in a muddied mess. Again, something I was willing to fix. pic.twitter.com/Mi49BtA7yG

Just wanted you all to know because my name is on that comic but I’m pretty annoyed about how it looks. As a palate cleanser, here’s the cover and the first two (also the best) pages, unaltered. pic.twitter.com/DFjiTmgm3Z

See, this is another problem in an era of terrible PC – they’re terrified of even implied nudity, something the more adult comics overseen by Stan Lee in the Bronze Age could feature, but today, nobody working at Marvel’s willing to respect that, nor do they have the courage work on such a challenge. Or, they don’t have the courage to ignore the 23 obnoxious Twitter trolls who could come out of nowhere and rudely complain about peanuts.

Why such businesses continue employing Twitter at all is beyond me.

Most amazing about this flap is all the boilerplate leftists who commented on the revelation, including artist/writer Jen Bartel, who’s got Asian ancestry herself:

They… made your perfectly representative art look uncomfortably close to a series of racial stereotypes. Not only did they make your work look objectively worse, the end product is actually really upsetting and counterproductive from an “Asian sensitivity” perspective. Sad.

For those who aren’t aware, there is a long history of Asians having our eyes described as “suspicious”, “untrustworthy”, etc—literally resulting in the invention of a Eurocentric double eyelid surgery that was then forced upon wounded Korean soldiers by American surgeons. pic.twitter.com/qKFiELR6lg

Whoever flagged and adjusted Greg’s art needs an extended history lesson because it’s clear they do not understand what it means to have “sensitivity” around Asian representation. These seemingly small changes take good, accurate depictions and turn them into something offensive.

Somebody told her it was surely white staffers responsible, and undoubtedly leftists too. So, if the creators are liberals, amazing that now, after all the trouble Axel Alonso caused when he was EIC, it suddenly matters to them that work is being tinkered with and censored. And another artist by the name Kyle Guilbault said:

Your originals are phenomenal and I don’t think after ‘Akira Yoshida’ that marvel has any ground to stand on for ‘best asian representation’.

Also the retouching just makes us look like lizard people, so there’s that.

No argument there. This only compounds the negative perception one can get in such a pathetic man, though he’s obviously not the only guilty party; there are several higher echelons like Dan Buckley and Sana Amanat who’re just as responsible. Including an editor named Devin Lewis, who tried assuring Smallwood they took accountability for their tinkering, but, Smallwood says:

Not miscommunication. NO communication. Devin apologized to me yesterday for not being able to respond to my emails concerning the edits (some kind of server error on his end). He was not apologizing for the changes. He assured me yesterday that I would be happy with them. https://t.co/Bb25k2VnSL

I think it’s time for artists like Smallwood to let this serve as a wakeup call and realize Marvel/DC are held hostage to the worst ideologues in the corporate mainstream. To recognize that this is bound to continue if such awful people continue to lead their management. Again, I ask, why doesn’t somebody make an unambiguous call for the resignation of all bad apples, or better still, that the publishing arms be sold to an outfit that actually cares?