When I started drawing my first graphic novel, Roadwarrior Drake, back in June, I didn’t know it would begin a journey into a tortured world, that of the comic industry. I say tortured because it takes great misery (in my opinion, anyway,) to be an outright jerk to those who would otherwise take time and money out of themselves to back you and support your work. This is why it came as no surprise when comic book stalwarts like Mark Waid and Chuck Wendig startled the comic book fan community when they lashed out at fans who had issues with the political and social agendas shoved in to their favorite works of fiction. All of a sudden, these revered artists and writers became hostile to the very fans who supported them. It isn’t a new thing for entertainers to be a tightwad to their fans. It was, however, eye-opening, that an entire industry was revealed to be so. For me, this was the birth of Comicsgate.

This article, however, is not going to discuss that. I only included it to serve as the background for a bigger issue. As an indie artist (filmmaker and comic book artist/ writer,) I understand I will live or die as an artist based on the fan base I have supporting me. My works will stand the test of time based on those who patronized it, talked about it, interpreted it (whether right or wrong) and were inspired by it. Therefore, it’s surprising when semi-pros or amateurs in the comic book community follow the patterns of Marvel Comics (and Lucasfilm in the film industry) and feel they have the audacity to attack their fan base when they feel a slight or experience a shortcoming of expectations.

Take, for example, the “Mindy Wheeler debacle”. I call it a debacle for a variety of reasons. First and foremost, Ms. Wheeler is a very good artist. Her work definitely deserved exposure and she should have built a very nice brand for herself ahead of her upcoming comic book.  But this leads to my second point, which is that she aligned herself with the “Comicsgate” crowd on the expectations it would build her career. As of this reading, she has deleted her Twitter account so her Tweets are no longer available on Twitter, but please feel free to check out these two videos which contain many of these Tweets in question. One by Nasser Rabadi called “The hypocrisy of Mindy Wheeler (day 40,559 of Mindy leaving #Comicsgate)”

The hypocrisy of Mindy Wheeler (day 40,559 of Mindy leaving #Comicsgate)

And the other by Ash on Comics, a more middle of the line video called “Commentary – More Comicsgate Nonsense and an Open Letter to Mindy Wheeler”

Mindy’s war with Ethan Van Sciver over an app she claimed would help Comicsgate expanded to Comicsgate itself. I personally Tweeted with Mindy back and forth a few times on Twitter. It wasn’t a total back and forth between us. It was more me expressing to her that comicsgate was not some hate group and her telling me by virtue of me being Comicsgate I am endorsing a hate group. She cited The War Campaign as an example of the hatred of Comicsgate. Now I am not entirely too amused with the antics of the War Campaign, but even I had discernment enough to know they were more satire than anything, so it was surprising to me that she appeared so sensitive about them. She did fail, however, to provide another example of widespread hatred within Comicsgate. Again, these Tweets are long gone so I can’t show screencaps as evidence. There is, however, a couple of screen-caps that I took of Tweets that all but destroyed Mindy, and these weren’t even from her. They were from her husband, Mike: 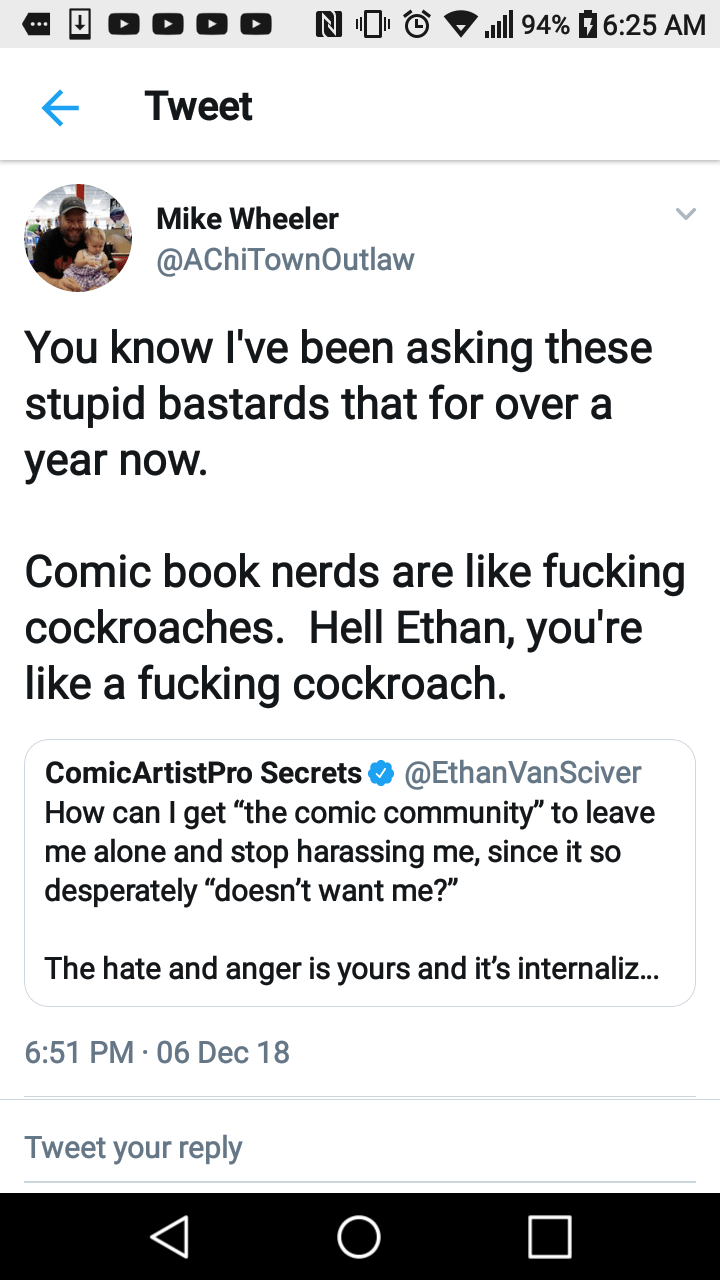 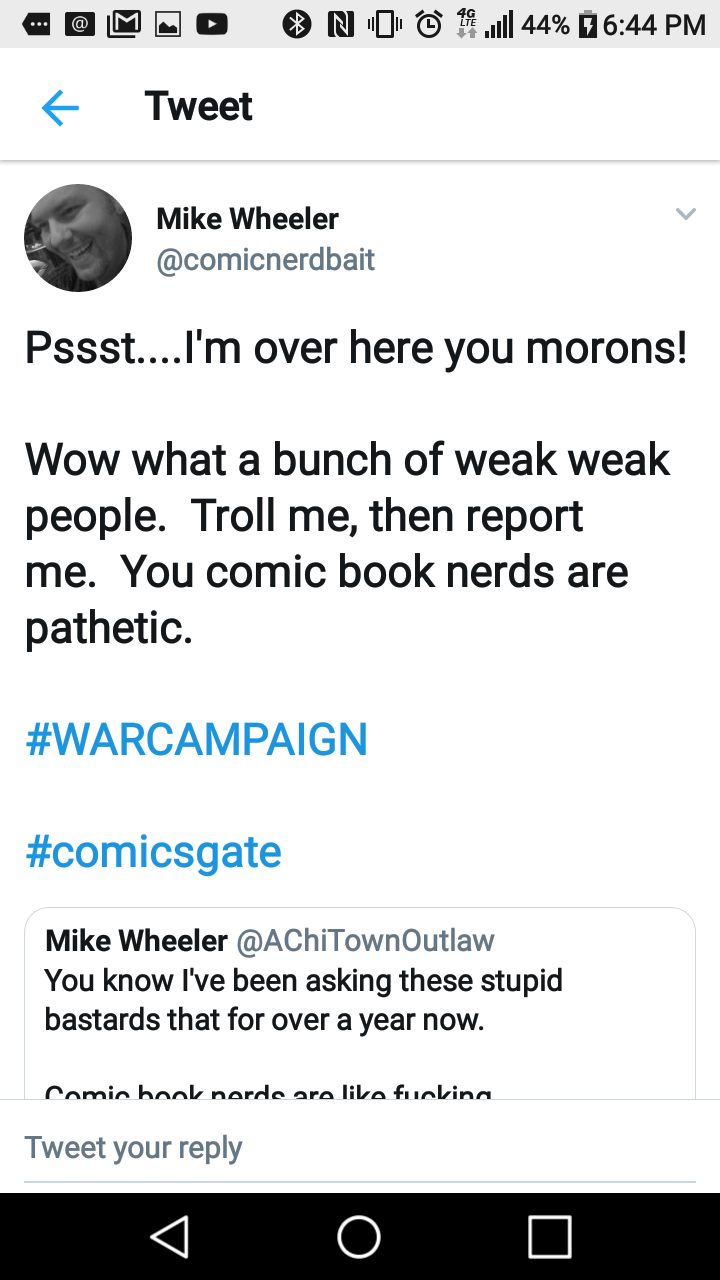 These Tweets were fairly revealing into how the Wheeler’s seemed to view the comic book fan base. Mike appears blatant in his contempt for comic book fans, and Mindy’s silence about these comments indicate she may have felt the same (or perhaps was too afraid to confront them publicly about.) In my earnest opinion, it does take great spite to view your commercial base, your market, and your life support, as “cockroaches.” This was, to me, more upsetting because I can excuse Mindy leaving Comicsgate, and I can excuse her voicing her displeasure about it. We can feel however we want to feel about something and express it. I do believe in freedom of speech. The line, though, was crossed when her husband lumped an entire customer base and labeled them as “morons” and referring to comic book “nerds” as “pathetic.” This all but destroyed Mindy’s brand even before her comic was completed. She has since disappeared from Twitter, YouTube, and Instagram (though her Facebook remains.)

In the wake of the Wheeler insanity, I have been seeing some more of the contempt towards the fan base by semi-pros. One recent one was Jeff Lafferty, writer and illustrator of the Berserkonaut comic, a comic I backed, by the way, and which was endorsed by many among Comicsgate. In a YouTube video by Lafferty, titled “Comicgate Bullies Mindy Wheeler Off Youtube,”

Lafferty makes a couple of startling statements. First, at the 1:32, he refers to the Nassir video, who he refers to as “some kid” and states he was “bitching” about Mindy. Then Lafferty confesses he feels bad for Mindy. However, the most startling claim, at about the 2:30 mark, is that Mindy was somehow “trolled off the internet.” I had wanted to give Lafferty the benefit of the doubt until a few seconds later, when broaching the possibility that he would hear the whole story behind it, that he didn’t care about hearing it. Lafferty would rather feign ignorance and pity a woman rather than hear the whole story and acknowledge responsibility on Mindy’s part. Even in the comments section Lafferty doubled down on his thoughts and seem to go hard against the commenters who disagreed with him.

What can be learned from this? At the end of the day the market wants what it wants, and we as artists or sellers do not dictate the market. It’s the consumers who control the wave of the market. Ethan Van Sciver’s biggest attribute is that he reserves his attacks on the enemies who already exist simply because he exists. There is no need for him to express any sort of kindness towards them. It is his humor and soft spoken personality that is reserved for his fan base, a fan base he acknowledges isn’t leaning in any particular direction politically or socially. That is the motto among the Van Sciver’s, the Malin’s, the Miller’s and even the Peter Simetti’s (who isn’t comicsgate.) Broad appeal and respect for the fans ultimately does sell comics, and plays a big part in building your brand as an artist. I remember this everyday and stamp it in my heart, that as long as I can disagree politely with fans, respect them and acknowledge their patronage in my products, I have a fighting chance to succeed. I can only hope to one day have a fraction of the fan base EVS has. I can only hope that I will develop a sizable enough of an audience that is truly entertained by my films and my comics. 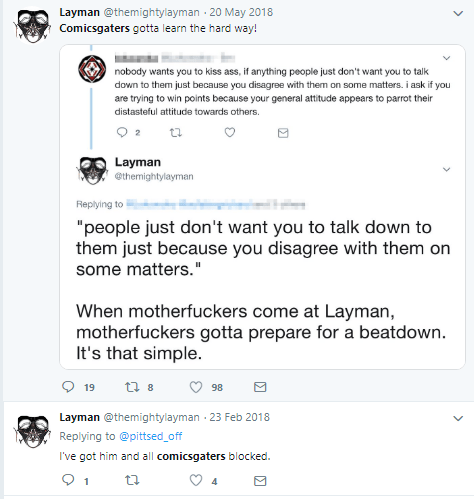 If Roadwarrior Drake becomes a success and is the sleeper hit of 2019, I have only to thank the people who purchased the comic. They are my lifeline and they have trusted me to deliver a product before I could even prove myself. For that alone I will always be YOUR biggest fan. We may disagree but I pledge never to disrespect you (provided of course your disagreement doesn’t cross personal boundaries.) I pledge to always be grateful for your continued support in my works, and to always bite my tongue if I feel like lashing out, because I am human. I am human but I should also be wise. As an indie artist, I should take some key lessons from the examples set forth by Mark Waid, Chuck Wendig, Mindy Wheeler and Jeff Lafferty. Always be kind to your fanbase, even if you don’t agree with them.

(writer’s note: I will still continue to support Jeff Lafferty’s Berserkonaut simply because it is a good comic and I love Lafferty’s art style.)