Whatever Happened to a Little Optimism in Our Entertainment?

One of the big(ger) — and correct — complaints about entertainment these days is that everything is too dark.

Creators have turned heroes like Captain America into villains, as well as vessels by which to spout their political propaganda. Two of the three rebooted Star Trek films were bleak as hell — Into Darkness featured an underhanded admiral who was turning Starfleet into war-making military force, while Beyond had a century-old Starfleet captain getting revenge on the now-Federation for “capitulating” to its enemies. 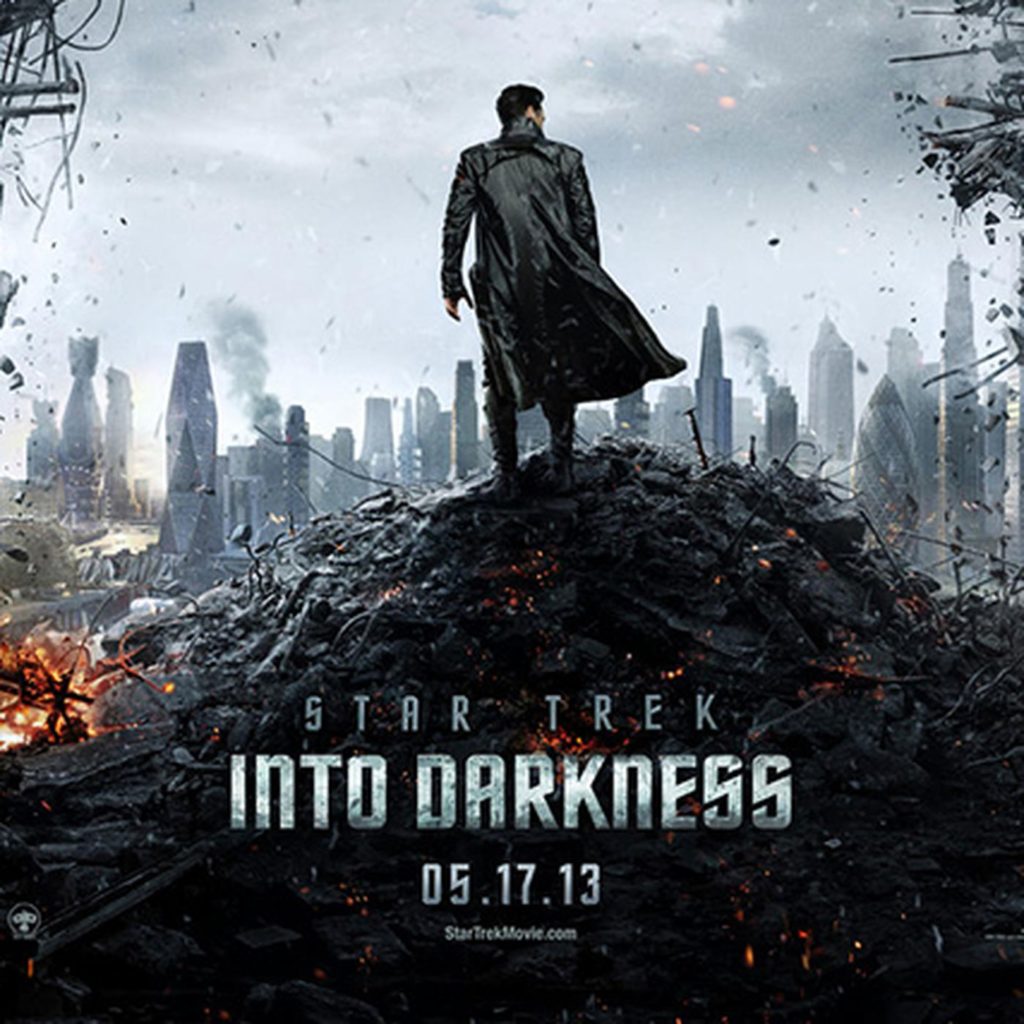 The new Trek series “Discovery” and “Picard” follow the same pattern. The former prominently features the clandestine Section 31 and Mirror Universe Terran Empire, while the latter utilizes Terminatoresque themes of artificial lifeform armageddon and a Federation that’s lost its way. 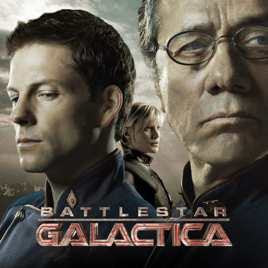 The reimagined “Battlestar Galactica,” whose first three seasons were some of the best scifi in recent years, also turned the story’s original premise into a bleak, gritty vision. This time, the Cylons are humanity’s original sin, robots which eventually rise up and almost completely snuff out their former masters. The Galactica’s search for the mythical Earth also falls victim to the same darkness.

Even recent “cerebral” films like Ad Astra make you ask yourself “What’s the point?”

Writers believe they’re being “edgy” and “current” with such ideas and themes; however, the reality is they quickly become tiresome as the lack of optimism takes away all the fun. And hope.

Star Trek needs desperately to return to Gene Roddenberry’s vision of human potential and the maintenance of enlightened values. For example, despite its glacial pace, the ending of Star Trek: The Motion Picture is the epitome of Roddenberry’s philosophy. Consider, too, the endings of “The Next Generation” episodes “The Nth Degree” and “Transfigurations” … and the grief experienced at the conclusion of “Silicon Avatar.” 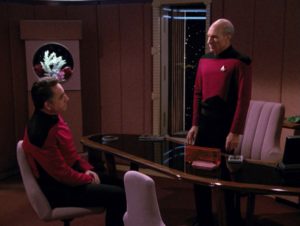 up to no good (and costs fellow captain, Maxwell, his career) … and the Picard from “The Ensigns of Command” where he doggedly plays by the rules to find a means to delay the arrival of the Sheliak.

We need the Captain Janeway who went out of her way to adhere to the Prime Directive throughout Voyager’s trek through the Delta Quadrant. And, we need the consciences of Captains Sisko and Archer which, despite facing possible extinction, were torn apart in the battle between maintaining principles and saving civilization.

Anyone familiar with the various “Trek” series (excluding “Discovery” and “Picard,” that is) knows there’s a certain conceit to the Federation, but it’s a good conceit. It was founded by cultures which had managed not to destroy themselves, and to restructure their values to give priority to peace and prosperity for everyone. There’s no moral comparison between the Federation and its closest neighbors; the Romulans, the Cardassians, and the Klingons all are military dictatorships which constantly seek to expand their territories and subjugate others.

Compare Ad Astra to Arrival — which one had you going “WOW!” and made you smile at the end?

The 1978 — original — “Battlestar Galactica” was much more hopeful and positive than its offspring. Here, the Cylons are robotic replacements for a dying reptilian race who, like in the reimagined series, almost succeed in destroying their enemy: humans of the Twelve Colonies of Kobol. But this journey to Earth keeps the hope alive (just ignore the apocryphal “Galactica 1980”), in particular the two-part “War of the Gods” which is a not-so-veiled God vs. Satan parable. 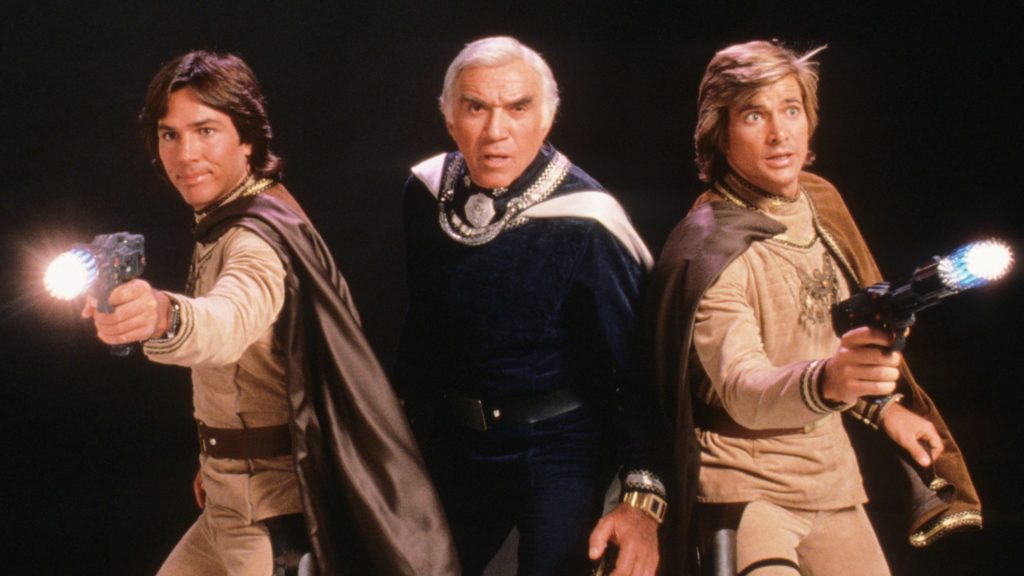 Like Roddenberry, in the novel (novel, not movie!) Starship Troopers, author Robert Heinlein emphasizes the human spirit, especially our ability to maintain our individuality yet also come together for the collective good. He highlights our commitment to each other despite it possibly, ultimately, leading to our demise: Terran Federation troopers want their captured brothers back from the Bugs! As Heinlein wrote:

Our behavior is different. How often have you seen a headline like this? – TWO DIE ATTEMPTING RESCUE OF DROWNING CHILD. If a man gets lost in the mountains, hundreds will search and often two or three searchers are killed. But the next time somebody gets lost just as many volunteers turn out.

Poor arithmetic… but very human. It runs through all our folklore, all human religious, all our literature – a racial conviction that when one human needs rescue, others should not count the price.

Weakness? It might be the unique strength that wins us a Galaxy. 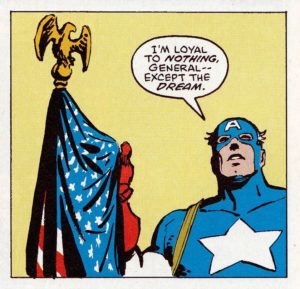 And where’s the Captain America we saw in Frank Miller’s classic Daredevil arc “Born Again,” where he “corrects” an army general about his loyalties? Or the Captain America from Jim Shooter’s “Michael” Avengers story in which the “just a man” almost bested an omnipotent god? Or the Tony Stark who contemplated his morality in the uber-single issue “Long Time Gone“? Or the Tony Stark who, during a blizzard, was willing to give his own life in order to save the life of an infant (Iron Man #182)?

This is what we need today, not more politically correct dreck which claims to be moral and enlightened. Does anyone think shit like the new New Warriors is even marginally intelligent entertainment? Anyone??

That’s just it — the trademark of modern political correctness is intellectual vacuity. College courses in the “studies” realm are chock full of this nothing, where students are assigned readings in which “scholars” make themselves feel important by making up words and acronyms that are then shared by others in the same “field.” And these “studies” typically are all about how everything white, male, heterosexual, and Western is evil incarnate.

Likewise, contemporary creators think they make important statements by concentrating on “representation” and “identity” in lieu of an actual story. As with their professorial counterparts, creators’ stories get in your face about the (alleged) indecencies of many of the things that have elevated our culture to its current greatness. For these folks, there’s only one way: what they believe. And if you differ, you’re immoral, nefarious, and evil.

Gone are the deliberations of “Long Time Gone”‘s Tony Stark … or those of Steve Rogers in deciding to drop the mantle of Captain America for a time. In their place are “superheroes” who shout “holy menstruation!” and allegedly set a new standard for “jock.”

It’s time for creators to bring a certain level of optimism and heroism back to adventure entertainment.