I discovered graphic novelist and video commentator Richard Meyer talking (embedded above) all about this independent comic titled Yasmeen, which is about an Iraqi Muslim woman who’d survived slavery by ISIS, and later traveled to and readjusted in America. Meyer claims it was overlooked, because SJWs don’t really care about minorities, not even Islamists, which is true in a sense, but that doesn’t mean they don’t condone the propaganda this book could stand for, and that’s why I find this a very strange thing he’s saying. He says the protagonists aren’t presented as lunatics. However, this review of the 3rd issue on Monkeys Fighting Robots is decidedly reason to be wary:

“Split between two times in her life, Yasmeen tells the story of an Iraqi girl who survives slavery in the ISIS terrorist regime in Mosul. Yasmeen was a happy 16-year-old until she was captured by ISIS invading forces and was forced to find the courage within herself to endure slavery. After surviving long two years of slavery, she is freed, but has become a different person. Unable to connect to the things that she loved before, she must go through a different kind of struggle, as she tries to adjust to the normal life with her family as refugees in a foreign country, America.”

With this third issue of “Yasmeen,” Ahmed focuses primarily on both Yasmeen’s and her father’s attempts to establish a new normalcy, with the latter of the two almost unable to even look at his own daughter anymore. It also covers the frightening notion of Yasmeen having started to accept her horrible life in imprisonment as a relative normal, as well as dealing with classic post-9/11 racism and islamophobia. Ahmed manages to impact a new emotional point with every issue, and this one runs the gamut of heartbreaking realizations. The traumatizing and life-fracturing events that Yasmeen’s family went through obviously did the most damage to the titular character, but watching this family remain true to their faith while also attempting to find happiness again is a seldom-seen brand of devastation. Once again, the characterizations and dialogue writing of Saif Ahmed feel so right and appropriate they almost disappear into the story. If there is one minor issue with this chapter, it’s that the flashback and flashforward structure that this comic has had so far actually gets a tad confusing this time around. It isn’t exactly head-spinning, but it feels less neat then the two prior issues’ approach to this style. This one nitpick aside, this is yet again a brilliantly written and impactful piece of comics storytelling.

Okay, hold on a moment here. Now are they telling us the book has an accepting view of the Religion of Peace, which is precisely what led to the girl’s kidnapping and enslavement, and act as though it has no connection with the issues at hand? And that anybody who’s critical of Islam is inherently wrong? Are they even denying jihad is part and parcel of Islam?

If Meyer’s taking a lenient approach to Islam, he’s regrettably sugarcoating a comic built upon taqiyya (deception), whose authors are apparently not willing to acknowledge that ISIS was following the quranic beliefs in slavemongering and other horrific positions. And that’s really disturbing, considering I’d supported his side in the past few years, after all those horrific characters in and around the medium were brainlessly assaulting him and getting him blacklisted over petty issues. 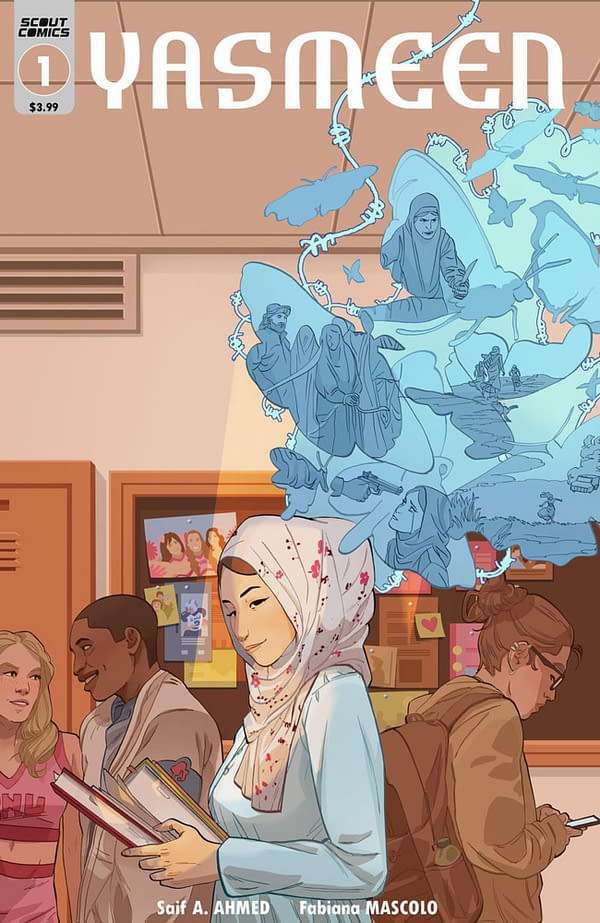 The Yasmeen comic may have been ignored by SJWs in the long run, but I’d guess it wasn’t so much because of its accepting view on Islam, so much as that it dealt with terrorism at all, and to the PC crowd, even that much is unacceptable. Considering the Muslim Ms. Marvel is something the industry/press in general went out of their way to promote over the top, it’s not like they don’t see Islam as something to ignore.

Let’s be clear. The conduct of ISIS is abominable. But to obscure ideological motives doesn’t solve anything, and ignores that the belief system practically allows 2 or more sects to battle each other. According to Meyer, when he was serving in Iraq, he didn’t see any spousal abuse in view. Well of course not, because these are things taking place behind closed doors; that’s how domestic abuse works in general! But really grating about his commentary is that it obscures the even more horrific issue of Islamic honor murders. Of course it’s not like it occurs in an omnipresent manner, but that doesn’t mean it’s not happening, and if this comic is obscuring Islam’s connections with the topic, that’s what’s troubling.

I took a look at the video comments, and one example is:

I realized this on Perch’s Luke Cage video, but SJWs don’t care about characters that aren’t pointing their fingers at someone or aren’t taking the spot of an established character, they literally created a culture centered around that being a synonym for virtue.

I remember a few years ago, when we were having all those discussions around that shitty She-Ra reboot, and people kept complaining about the lack of non-sexualized female characters in animation, meanwhile I was trying to promote this series called Emara about a female Muslim superhero animated in Saudi Arabia that you can watch for free on Youtube and no one cared about it.

Is somebody else whitewashing the “religion of peace,” and come to think of it, making it sound like “sexualized” is an inherently bad thing? I’m not amused by the sight of somebody giving free ad space to what could be another example of taqiyya. But of course no one about the above; even if they view the perspective of such propaganda as acceptable, they’ll still complain, stemming from an obsession with ridding all art of sexuality. That’s what it’s all really about.

If you never saw evidence of violence against women in Iraq, I’d say you were lucky. I was there in 2005-2006 with 36th EN BDE. We found, at various times, 3 bodies of girls who had been killed for “family honor” in Baghdad. We knew the reason because of the notes pinned to their clothes. And while on Iron Claw route-clearance missions, we witnessed a couple of beatings.

But yes, I would agree with you that the idea that it is omnipresent is certainly incorrect.

That still doesn’t excuse that the ideological cause of a serious issue is being obscured or excused by the writers of this comic (and the reviewers), and that they may be accusing innocent Americans of “islamophobia”, which is actually a badge of honor for anyone who’s a realist. Again, if the MFR review is correct, and the story comes within even miles of condemning anybody concerned about Islamic influence, that’s just dismaying. How can problems be solved without knowledge? It goes without saying that such an approach does a terrible disfavor to 9-11 Families too by minimizing it all down to “classic post-911 racism”, and opposing legitimate criticisms of religion.

So what am I supposed to think of Meyer now, if he’s really being as naïve on these issues as this suggests? Well, I don’t regret being critical of the people who were attacking him in such petty fashion 3 years back; they were indeed very unpleasant characters, and have no place in sane society. All the same, this is very disillusioning, even more than the time when he folded on his lawsuit against Mark Waid, because now, how is one to know he doesn’t take a rose-colored view of grave subjects? Well, I guess that’s the lesson that has to be learned: sometimes, even people who may have an ostensibly perceptive viewpoint on one matter can still be very PC on others. And now that I think of it, if reviews like MFR’s are any indication, if they spoke about such a book, doesn’t that confirm there were leftists promoting it as a great item at the time? In which case, Meyer sure is taking an odd path to make it sound like none of them cared about potential propaganda they favored.