What Led to the Early Cancellation of NBC’s ‘Heroes’? 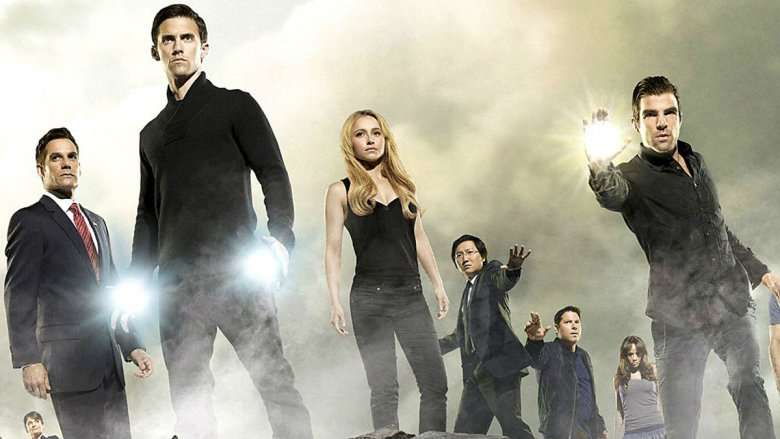 The Heroes TV show, which ran during 2006-2010, was an early example of a series drawing from comic themes turning to wokeness, as this 2009 article on Contact Music points out:

Actress Hayden Panettiere was the one who suggested her HEROES character should be involved in a lesbian romance on the hit show this season.

The Canadian star, who plays cheerleader Claire Bennett in the sci-fi series, will fall for her college roommate, Madeleine Zima, in an upcoming plotline and she reveals it was her idea to get sexy with another girl.

Today, however, it’s less likely they’d emphasize “sexy” with the way things are going when it comes to women in liberal-run entertainment products. This occurred a number of years before the Supergirl TV show of 2015-2021 pulled similar stunts with Alex Danvers, and the politicized handling’s become perfectly dreadful by now. So when these TV shows reach an end, it’s for the best. With more on the show’s cancellation, Looper covered the history of Heroes’ 4-season run last year, but it’s not like they delve deep into whether social justice themes ruined its quality. Still, there are a few things here worth considering:

Unfortunately, Heroes proved it could only fly so far. By its second season, viewership dropped by 15 percent, and things only got worse from there. Its fourth season premiered in 2009 to an audience of 5.9 million — a drop of 8.4 million from the 2006 airing of “Genesis” — and by the following May, the end of Heroes was official.

And what if the following had something to do with the ratings drop? Although there’s an unfortunate bias here:

Heroes could be fairly merciless when it came to killing off important characters. That isn’t necessarily a bad thing, but as early as the first season, characters who had wonderful promise — including ones played by actors any series should’ve bent over backwards to keep — were getting taken out like Batman’s sidekicks.

One of the best examples is the death of Daniel Linderman (Malcolm McDowell). McDowell is an amazing talent, his name was arguably the biggest in the series, and Linderman was a fantastic villain — the kind you can’t wait to see again. He was also a good example of one of Heroes’ refreshing touches: the types of abilities certain characters had went against what you would normally expect. For example, Nikki (Ali Larter) is the only character in season 1 with super strength, a power usually associated with male heroes. Likewise, Linderman’s superpower was healing, which is a pretty benevolent power for a bad guy. But whatever potential Linderman had was lost in “Landslide” — the first season’s penultimate episode — when D.L. (Leonard Roberts) phased his fist through Linderman’s brain, killing him instantly.

While this can certainly be troubling when the good guys fall victim to such a “trope”, the impact of the paragraphs is dampened when they cite supervillains, based on how, way too often in the mainstream comics this series was inspired by, they’re resurrected far more often than heroes and civilian co-stars. And say, what’s this about super strength usually being associated with male heroes? There have been plenty of female heroines who’ve possessed super strength in fiction too, with Wonder Woman and Supergirl just the beginning, and somebody spins us an awkward claim like male heroes being the main ones gifted with it? Please. And this article proceeds to take an absurd double-standard on the issue of resurrections next:

While the first season of Heroes had an issue keeping promising characters alive, the following seasons took one too many pages from the comic books that inspired the show, and as a result suffered from not letting anyone stay dead.

The first season finale, “How to Stop an Exploding Man,” ended with Nathan Petrelli (Adrian Pasdar) flying his brother Peter (Milo Ventimiglia) as high as he could, after which Peter’s radioactive build-up caused him to explode. Yet the second season premiere, “Four Months Later…,” resurrected both brothers. In the case of Nathan, the fact that he’d survived a nuclear explosion wasn’t even treated as particularly strange. The return of Peter was given much more weight, and the reveal acted as the episode’s surprise conclusion.

What was much more jarring was the death of Nikki Sanders and a strange resurrection that wasn’t really a resurrection. Nikki was caught in an exploding building in Heroes’ season 2 finale. The actress playing Nikki, Ali Larter, appeared as someone completely different in season 3. The new character was Tracy Strauss and instead of Nikki’s super strength, Tracy exhibited the power to create and manipulate ice. Fans speculated Nikki had survived and was altered somehow, but no. It was eventually revealed Nikki and Tracy were two of three identical triplets, an explanation so lame they probably wouldn’t even try it in a comic boo — no, they would. They totally would.

Yes, they could, but the writer’s taking a risk of double-standards on resurrection – if the brothers were heroes, as opposed to the aforementioned villain, their complaint is insulting beyond belief. And they don’t even ask whether it’s a poor double-standard to resurrect men but not women, if the above is any suggestion, recalling there have been cases of ladies in the comics who were left in the afterlife, as opposed to menfolk, recalling the Doom Patrol’s Elasti-Girl as one standout example: the male members of the team later returned, but she didn’t. If it were just Robotman, that would’ve been far more believable, and he did go on to serve good use as a guest in New Teen Titans.

Surprisingly, this item does make a point about too much darkness:

Long before audiences were telling Zack Snyder and the rest of the DCEU to stop with all the growly, dark brooding and maybe film some scenes that don’t take place during dark rainstorms, critics were blasting Heroes for what Mary McNamara of the Los Angeles Times called its “graphic novel noir feel” that, with the season 3 premiere, was “becoming increasingly oppressive, and everyone is just so grim.” McNamara said she wished “everyone would just lighten the heck up.” Sound familiar? She could’ve been writing a review for Batman v. Superman.

Why did everybody need to lighten up? Well, io9’s Charlie Jane Anders probably hit the nail on the head when she wrote that with its third season, Heroes “was just trying so damn hard.” They were trying hard — trying hard to redeem the abbreviated mess of the second season and to recapture the excitement of the first. The theme of the third season was “Villains,” turning its more heroic characters into jerks and Sylar into a good guy. Once again, an apocalypse was introduced right away, this time the Earth exploding from the inside. They tried to rekindle the urgent suspense that permeated season 1, but it never materialized. Rather than believing what they were watching was terribly important, viewers watched actors trying very hard to convince them that everything they said and did was terribly important… without much success.

What’s the use, though, of citing the writings of a contributor to IO9? One of the most insultingly awful left-wing sites around, and their political leanings practically encouraged this whole darkness debacle. Still, something’s terribly wrong when they start changing heroes into baddies, which is worse, and depending on the severity of a villain’s crimes, that too is insulting to the intellect when they’re turned into goodies. No wonder this TV show blew it big time. There’s more:

A frustrating comic book trope is the flip-flopping of popular supervillains. One of the biggest superhero movies of 2018 – Venom, originally one of Spider-Man’s darkest villains — is a perfect example. If a supervillain gets popular enough, the comic book companies either make them good guys, or at least make them straddle the fence between Justice League and Legion of Doom. Venom, Harley Quinn, Deathstroke, Catwoman, and even mass murderers like Joker and Thanos are easy evidence. There’s nothing inherently wrong with redeeming a villain, but when you make a villain become a hero, you risk eradicating exactly what’s so engaging about the character.

Sylar became another unfortunate member of the funnybook flip-flopping fraternity. Zachary Quinto masterfully played the chilling and terrifying villain Sylar of Heroes’ first season, but his alliances became more fluid as of season 3. When he was captured by the clandestine organization known as the Company, Angela Petrelli convinced Sylar she was his mother. Attempting to rehabilitate himself, Sylar agreed to accompany Noah Bennet (Jack Coleman) in his Company work. After some road trips, Sylar went back to the dark side, only to then go back to the good guys again by the end of season 4, helping against Samuel (Robert Knepper) and his carnie villains.

By making Sylar flip-flop, the writers of Heroes gutted the proverbial goose of its golden egg. While Sylar was just straight-up bad, there was no scarier villain anywhere on television. Sometimes you’ve just got to keep the bad guys bad.

But what about keeping the good guys good, ditto their co-stars? It’s considerably worse when you take law-abiding cast members and forcibly turn them into murderous criminals for the sake of cheap sensationalism. No wonder I don’t find the Phoenix Saga appealing; it practically started this whole embarrassment. But if they recognize the logical strain in turning murderous villains into heroes, at least that’s getting somewhere. It’s insulting to the intellect when Joker is abruptly depicted as some kind of hero, ditto Sinestro from Green Lantern, who underwent such a bizarre transformation over a decade ago, IIRC. And if Sylar was a lethal criminal, then that’s taking the offensive trope PC advocates in modern mainstream started, and adding insult to injury.

So in the end, what good was Heroes? It did no favors for the themes it built upon, and the producers clearly couldn’t decide on a consistent direction. All they did in the end was resort to cheap tactics like darkness, among other clichés already begun in mainstream superhero fare to their detriment.